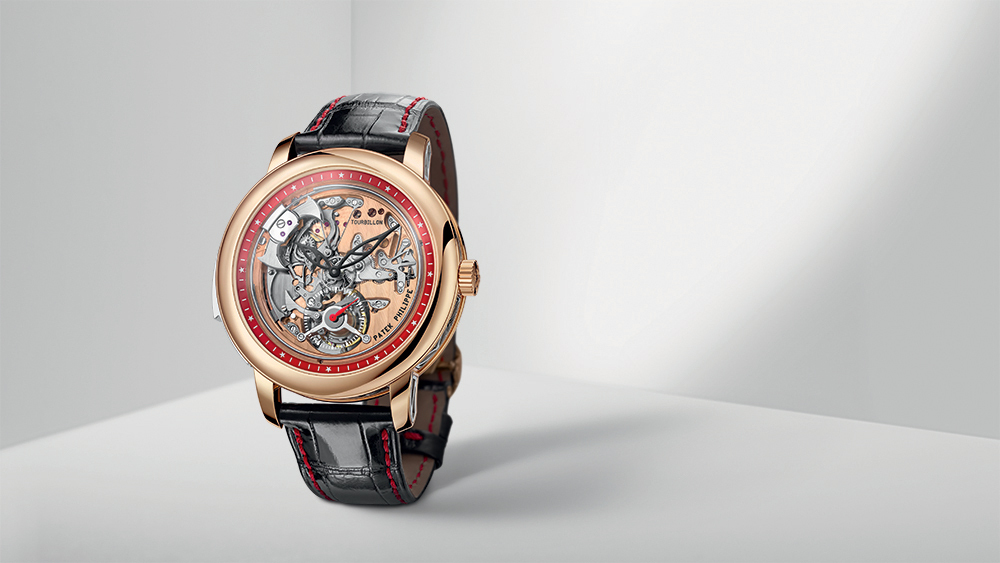 In a departure from its conservative designs, the watchmaker stepped outside of its box for the Asian market.

Patek Philippe is not a brand known for showing off. But the family-run company recently decided to flex a bit in Singapore, unveiling a minute repeater model that displays its mechanism on the dial—a first in the brand’s 180-year history.

Introduced at Patek’s fourth—and largest—Watch Art Grand Exhibition, which began in Dubai in 2012 and has been held every two years in a different city since 2013, the new Reference 5303 Minute Repeater Tourbillon uses the same base movement for the repeater as references 5104, 5204 and 5304. But the gongs and hammers, traditionally only viewable through the caseback, have been moved to the dial, allowing the mechanism to be seen while worn.

“Our customers have been asking to have an open dial, but we’re not very fond of that—we like a very classical watch,” says Philip Barat, the brand’s head of watch development. “But we said, ‘We think it could be a good idea with the minute repeater, because we can actually see something working and moving.’”

And while such showmanship is surprising from one of the world’s most reserved luxury watchmakers, Patek Philippe president Thierry Stern suggests we haven’t seen the last of it. “We will reuse this,” Stern says. “It’s a big investment, so we have to use it in a different way.”

The brand veered further into exhibitionist territory with the 5303, making the underside of the tourbillon cage visible through an aperture at six o’clock—another Patek first— plus anti-reflective sapphire- crystal glass to protect against UV rays that can degrade the tourbillon’s lubricants.

The 5N rose-gold base plate in Côtes de Genève decoration highlights the steel parts of the watch’s inner workings as well as the gongs and hammers. Limited to just 12 pieces, Patek offers the watch only to collectors who claim residency in southeast Asia. Despite Stern’s proclamation that the movement design is slated for future use, those who have already grabbed theirs can remain assured of its rarity: Rabat says few tourbillons will be made at Patek Philippe going forward.

“A few years ago, we launched the hairspring in silicon; we have it in 90 per cent of the collection, except in our tourbillons, which use a Breguet overcoil for greater accuracy,” he says. “However, we will use the silicon hairspring more and more, instead of the tourbillon, because it’s precise, reliable and thin.” (It is also, it should be noted, less expensive and time-consuming to produce.) So while the new minute repeater design may be front-and-centre news out of Singapore, for some lucky collectors the partially visible tourbillon might not just be another first, but a very significant last.

All of them are available for order starting today

Arriving in a menacing monochromatic aesthetic.