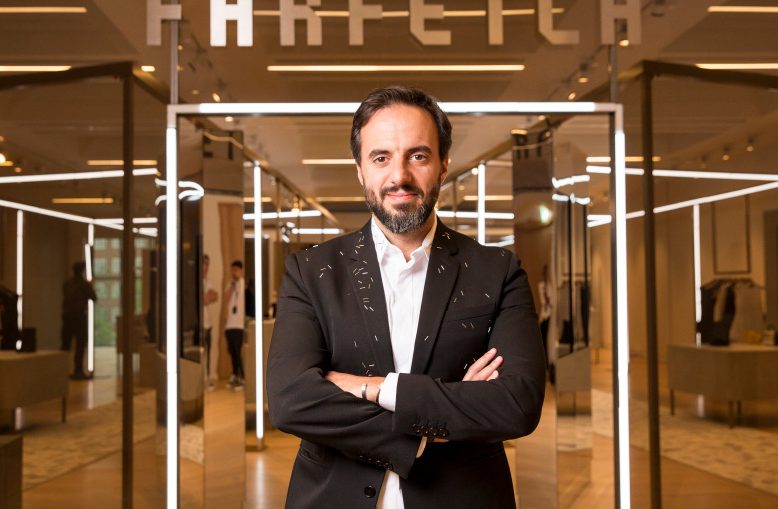 The CEO explains why his luxury group is resisting promotions.

“I’m incredibly happy, really, with how resilient this industry is,” said José Neves, founder and chief executive officer of the luxury platform, in an interview with WWD. “We’ve gone through an unprecedented crisis. This was much worse than 2009 — 2009 was an economic crisis, this was a humanitarian crisis. The impact on the brands was also much more severe. Here we are, 18 months later and brands are posting incredible growth, even on a two-year stack. We are very honoured and humbled really that we were a partner in a time of turmoil.”

Neves said the luxury industry has not just pulled through, but is healthier than it was, with more direct-to-consumer sales, with wholesale converting to e-concessions and more full-price sales.

For the three months ended June 30, Farfetch’s revenues increased 43.5 per cent to US$523.3 million — facilitating gross merchandise volume of US$1 billion. Full-price sales grew 90 per cent, driving the company’s digital platform GMV up 89 per cent from two years earlier.

Adjusted losses before interest, taxes, depreciation and amortization narrowed to $21 million from $25 million a year earlier.

Farfetch’s continued growth and prominence in the growing world of online luxury is a vindication of Neves’ strategy.

The CEO stirred up a hornet’s nest on Wall Street in the summer of 2019 when he moved Farfetch away from price promotions and forked over $675 million to buy Off-White and Palm Angels licensee New Guards Group.

Analysts fretted over the prospect of lost sales and an acquisition that complicated the company’s digital platform growth story with the messy business of owning an apparel maker and — yikes — inventory.

Two years and a pandemic later, Neves declared that both of those bets have paid off big time as the platform grabbed luxury market share with second-quarter sales and GMV gains.

And Farfetch has doubled down on its New Guards deal. The company said on Thursday that it bought 60 per cent of the outstanding equity interests of Palm Angels Srl, the owner of the Palm Angels trademark, last month. It also bought full control of the Palm Angels operating company, buying out the 31 per cent stake held by Venice Srl.

Neves sees more opportunity for the future as the company and its New Guards division launch their first line There Was One, a sustainable collection of luxury basics that will initially be focused on women’s product and will launch this quarter.

“The idea was to first look at all the data to be customer-centric and really look at what our customers are asking for,” Neves said. “We spotted an opportunity for wardrobe classics.”

So There Was One will be shooting for the perfect white T-shirt, denim jacket or tracksuit with some New Guards coolness baked in, Neves said.

There Was One says a lot about how New Guards is growing under Farfetch, providing a kind of connective tissue, filling in holes for consumers and taking advantage of the company’s own capabilities.

Neves said it was important “to really reflect on what happened in these two years” at New Guards. “We wanted to engage the creative community and bring a brand platform to market with digital capabilities.”

He said New Guards’ d-to-c digital sales have grown to 25 per cent of its business, up from 2 per cent at the time of the acquisition.

The CEO, who is a technologist at heart and in the past has described Farfetch as a kind of Netflix for fashion, told analysts on a conference call that the New Guards deal was playing out as he wanted.

“One of the core strategies behind the transaction was to create a pipeline of original content and exclusive collabs that will drive growth and significant halo effect to increase the engagement of our global customers of the Farfetch brand and ultimately drive more organic traffic,” he said. “I’m pleased to say we’ve had succeeded in this space. New Guards has propelled brands like Off-White and Palm Angels to become the top 10 brands on the marketplace by GMV in Q2.”

And the brands are driving customers to the company’s platform with “little to no marketing expense,” he said.

Part of that magic is in strong brand collaborations. Neves pointed to Virgil Abloh’s Off-White’s work with Lemonade and Nike Air Force 1s and Palm Angels’ collabs with Missoni and Team Wang.

“We will also look to continue expanding our brands into a new category such as beauty to enlarge our distribution with presences on Tmall and further enhance the shopping experiences by digitally connecting our directly operated stores via our luxury new retail capabilities,” Neves said.

Luxury new retail is a new kind of high-tech approach to brick-and-mortar that combines Farfetch’s work in the area — through its Browns business and a concept piloted with Chanel — and Alibaba’s own new retail approach in China.

The combination is coming together quickly as Alibaba and Farfetch already launched an innovation lab this year to push the boundaries of retail even before their partnership was finalized.

But the paperwork has now been signed.

And that deal, which also gave Farfetch a platform on Alibaba’s Tmall, is another deal that Neves said is working.

“The partnership is growing from strength to strength,” he said in the interview.