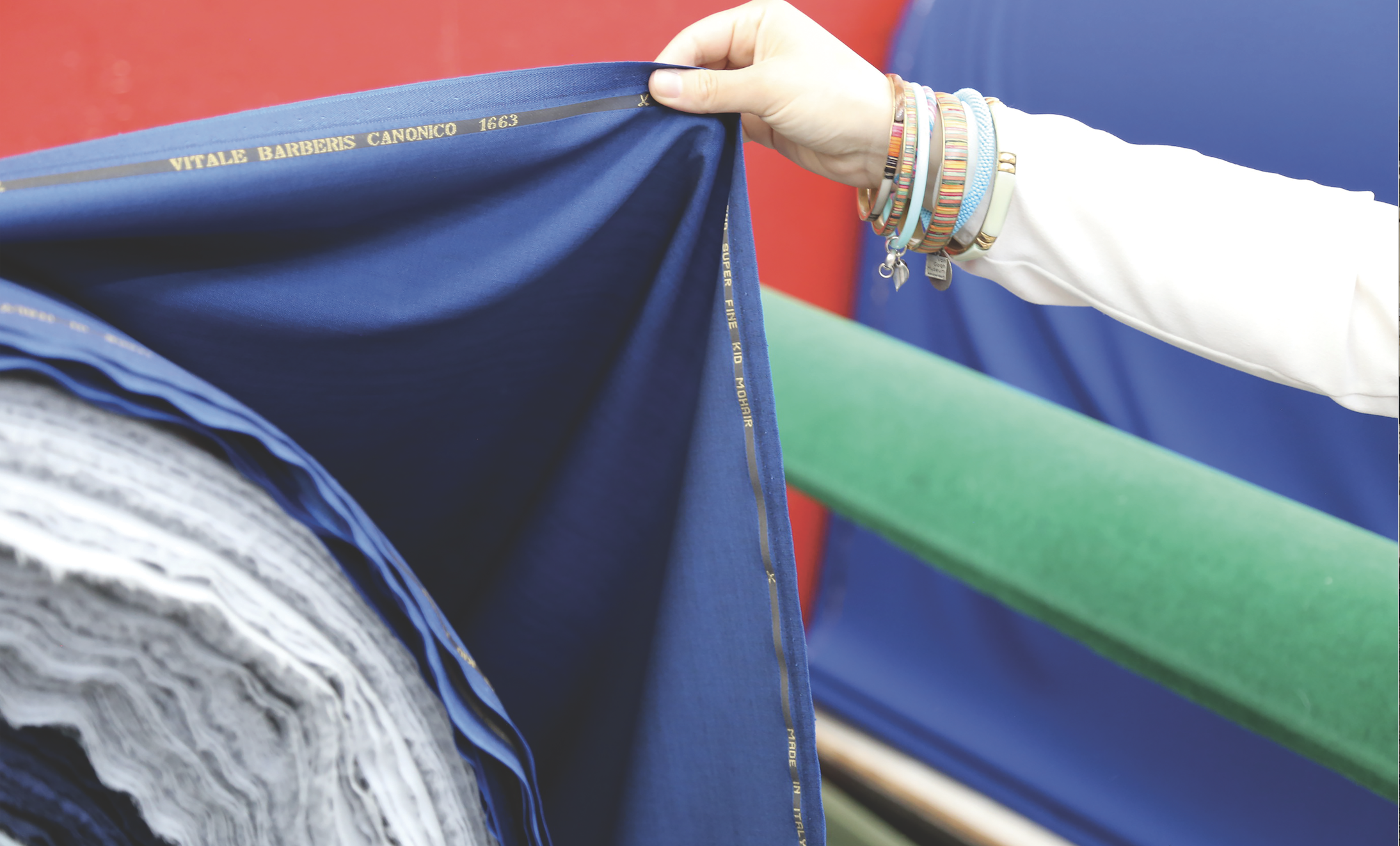 How a bale of Australian greasy wool weaves its way into some of the world’s most luxurious suits.

The drive from Milan to the province of Biella was a fast one, rarely dipping below 160km/h and in the bandwidth of speed that, at home in Australia, means instant loss of one’s driving licence for a year. Sensing my unease, Giovanni slowed down.

I hadn’t come to this part of northwestern Italy to follow in the footsteps of Australian F1 driver Daniel Ricciardo, but to follow the journey of an Australian bale of wool. Biella is a part of the story of so much of what most of us will only ever see as a ‘greasy’ fleece (the term for unprocessed wool) laid out on a classing table, or as a finished suit.

Everything that happens in between is almost a mystery. Why don’t we process wool in Australia? What exactly is it that the Italians do? And why is Italy still at the top of the game?

There are few better people to ask than my driver, Giovanni. At the turn of the the 20th century, Giovanni Schneider’s great-grandfather built textile weaving machines for the Marzotto textile business in northeastern Italy. After the Great War, his son, Giovanni II, secured funding from local textile families and emigrated to Australia, promising to source and export greasy wool on their behalf.

Thus began the GSchneider Group which, in 1950, began to move vertically from mere wool trading to producing wool tops (fibres processed into uniform strands) here in Biella. In the ’90s the Biella plant ventured further into processing, as Italian rivals retreated from the rise of China. The factory is one of only three facilities in Europe that can take a bale of greasy wool and take it through the process of washing, scouring, blending, ‘carding’ (aligning the fibres and removing clumps) and combing. What emerges are slivers of wool that become rope-like wool tops, ready to be delivered to be dyed before being spun into thread. 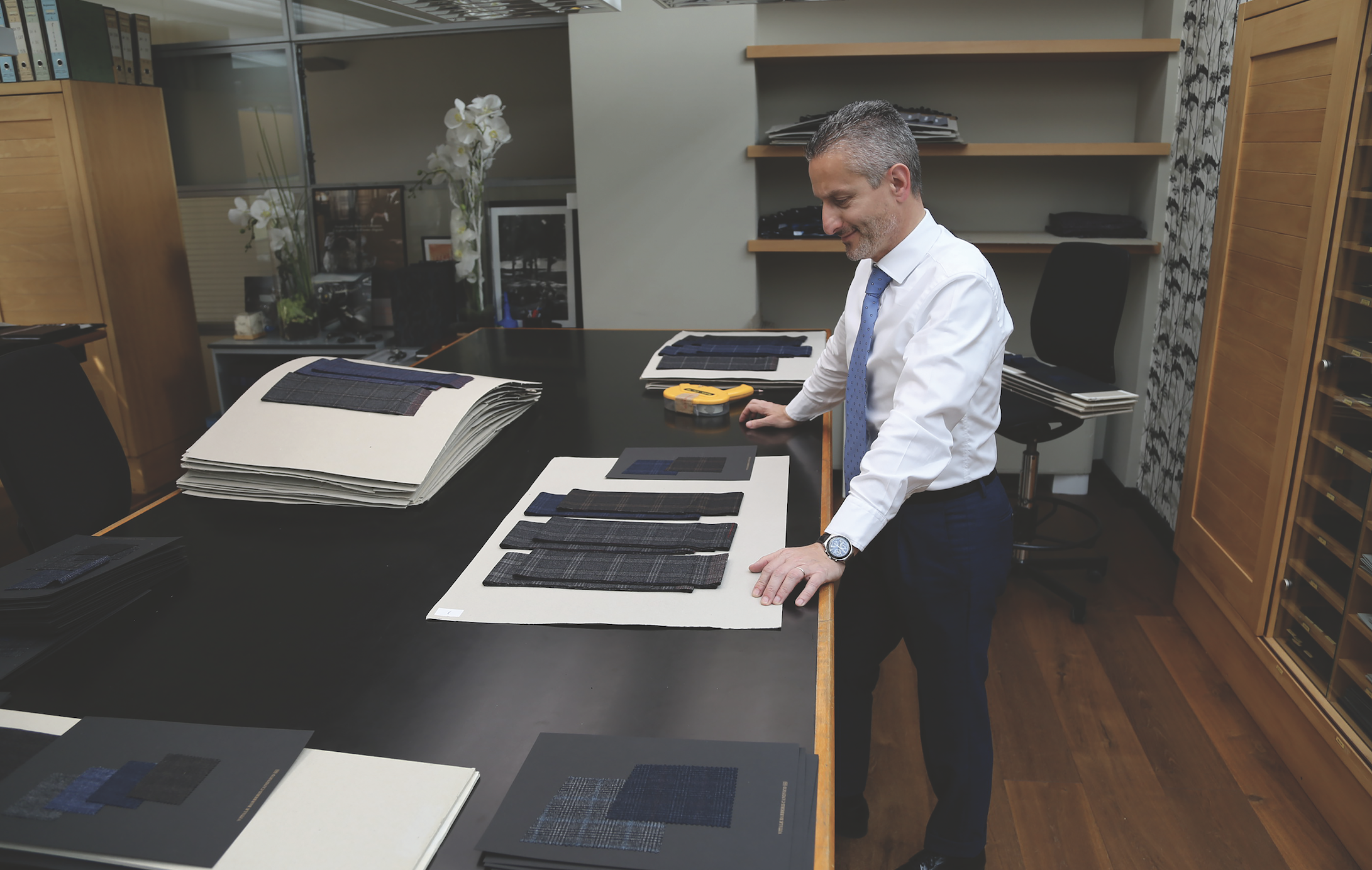 An interesting (and patriotic) point in the process is that, during the initial washing, lanolin is extracted from Australian Merino. It is on-sold to the cosmetics industry, bringing an additional revenue stream to the Biella plant.

Today, about three-quarters of the world’s wool goes to lower-cost producers in China. Biella’s two remaining plants focus on higher-grade fibres destined for weaving into suit cloths and luxury knits. In fact, familiar luxury names like Brunello Cucinelli, Marzotto, Zegna and Loro Piana all have shares in this facility. Their local competitor is a partnership between Reda and Vitale Barberis Canonico.

Vitale Barberis Canonico cites a history back to 1663, though some have scoffed at this. There’s a great deal of snobbery in these parts, where lineage and prestige matter. Meanwhile, Giovanni Schneider IV was on the mobile phone, orchestrating for me to be picked up by the side of the road to be driven to Trivero, in the Biellese Alps, where he had arranged for me to tour the VBC plant.

Another rapid trip ensued in the hands of a different driver, Silvio. The landscape on the winding ascent was more Switzerland than Italy; there was something unusual about the buildings that I couldn’t put my finger on.

Vitale Barberis Canonico begins dyeing wool tops in large bullet-shaped chambers. Robots place the wool tops into vats that heat them to 70 ̊C; the temperature varies over a three-hour cycle to ensure the dye penetrates. After drying, the wool tops are sent to the spinners who prepare the fibres and twist and turn them into threads.

This is quite an art form – akin to blending grape varieties – as the fibres are mixed between varieties (think Merino, cotton, mohair, cashmere, silk and linen) and colour.

Between the washing of the wool and the finishing treatments, the process consumes water at the rate of 60 litres per finished metre of fabric. Vitale Barberis Canonico today has a large and extensive water treatment centre adjacent to the plant, but it’s this need for water that largely explains why Biella became the hub of wool textile processing. The water that melts from the Italian Alps is ‘soft’, or low in minerals, and there’s plenty of it.

The plant is very secretive about the names on its machines and the weaving processes they use. Biella province was once home to around 500,000 people; it’s today closer to 200,000. Over the past 20 years, many in the industry have shut up shop or moved offshore, while the two that have remained have had to invest in automation. While they pride themselves on inspecting every metre of cloth at every stage with their own eyes, in time those eyes may be digital. 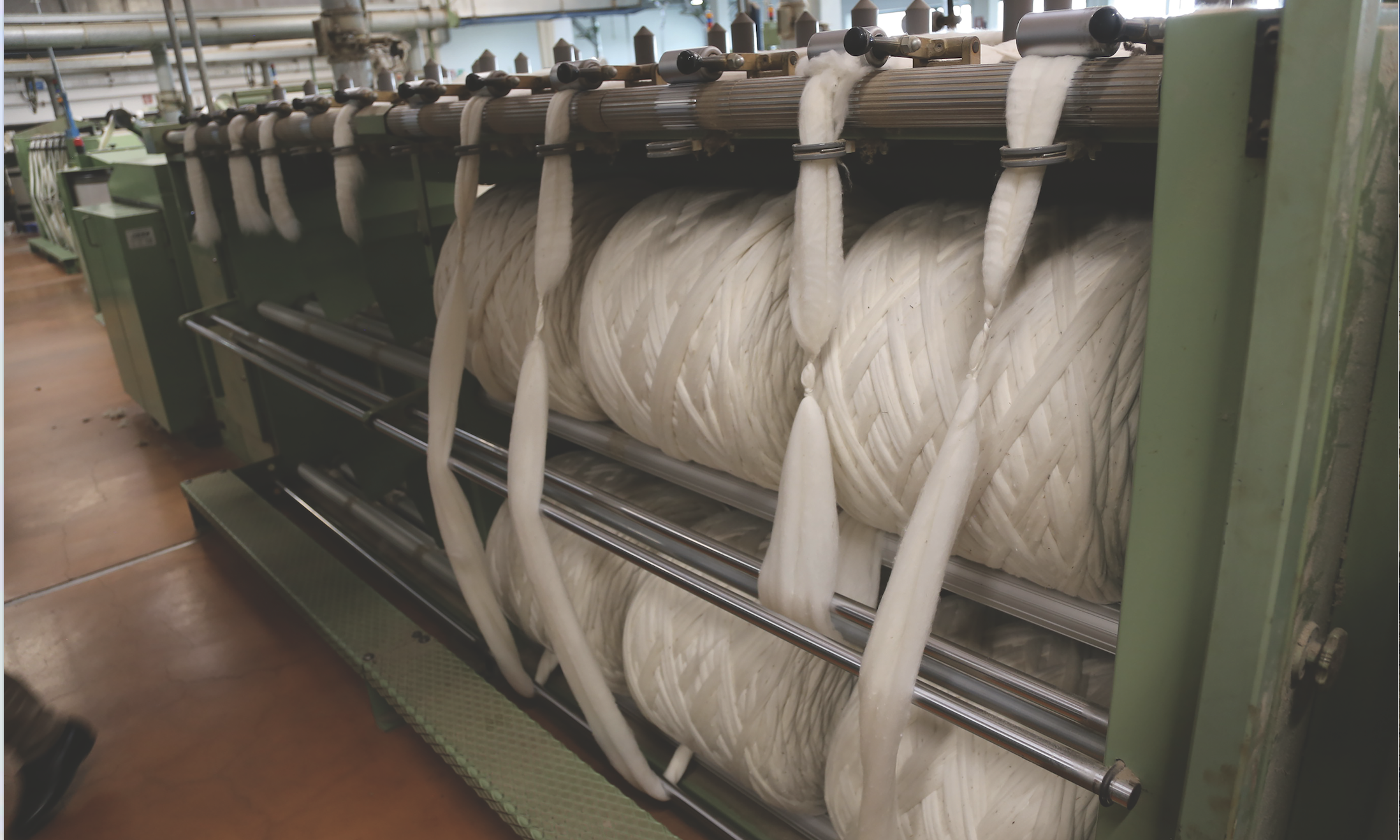 I was introduced to Michele Papouzzo, head of the cloth design team. Despite the relatively remote location, Michele was impeccably dressed in navy melange pants, belt, white shirt and a double four-in-hand knotted tie on a sky-blue garza weave. This is Italy, of course.

I learned that I had many misconceptions about weaving looms. The types of designs that can be woven in wool are much less complex than those possible with a jacquard loom for silk. More importantly, most of those 10 million metres of wool are done in simple dark blues and greys, varying in weaves and weights. The market for more vibrant wools is minimal.

I was also fortunate to meet Francesco Barberis Canonico, creative director of VBC and, as such, the man behind the very fabric of so many suits from famous designers, including Armani, Versace, Prada, Gucci and Ralph Lauren.

Collected again by Giovanni Schneider, we ascended the mountain farther, stopping by his maternal great-grandfather’s house: Casa Zegna. Ermenegildo Zegna is understandably legendary in these parts, a fastidious man who built not only a business, but a town and a proud culture around textiles and tailoring. His house, mostly boarded up, is maintained by a family foundation. A small walkway still joins the house to the weaving and making factory, operating today much as it always has.

From such a quaint and essentially Italian scene, I wasn’t quite prepared for the blast of Australian ambience I would encounter soon after at the Schneider plant.

As Giovanni opened the factory door, it was almost as though I was in the shearing shed with the shearers and wool classers. There was row upon row of hyper-compressed wool bales, stacked ceiling-high and marked with maps of Australia and stencils like ‘Pomanara Mudgee AusFine’. 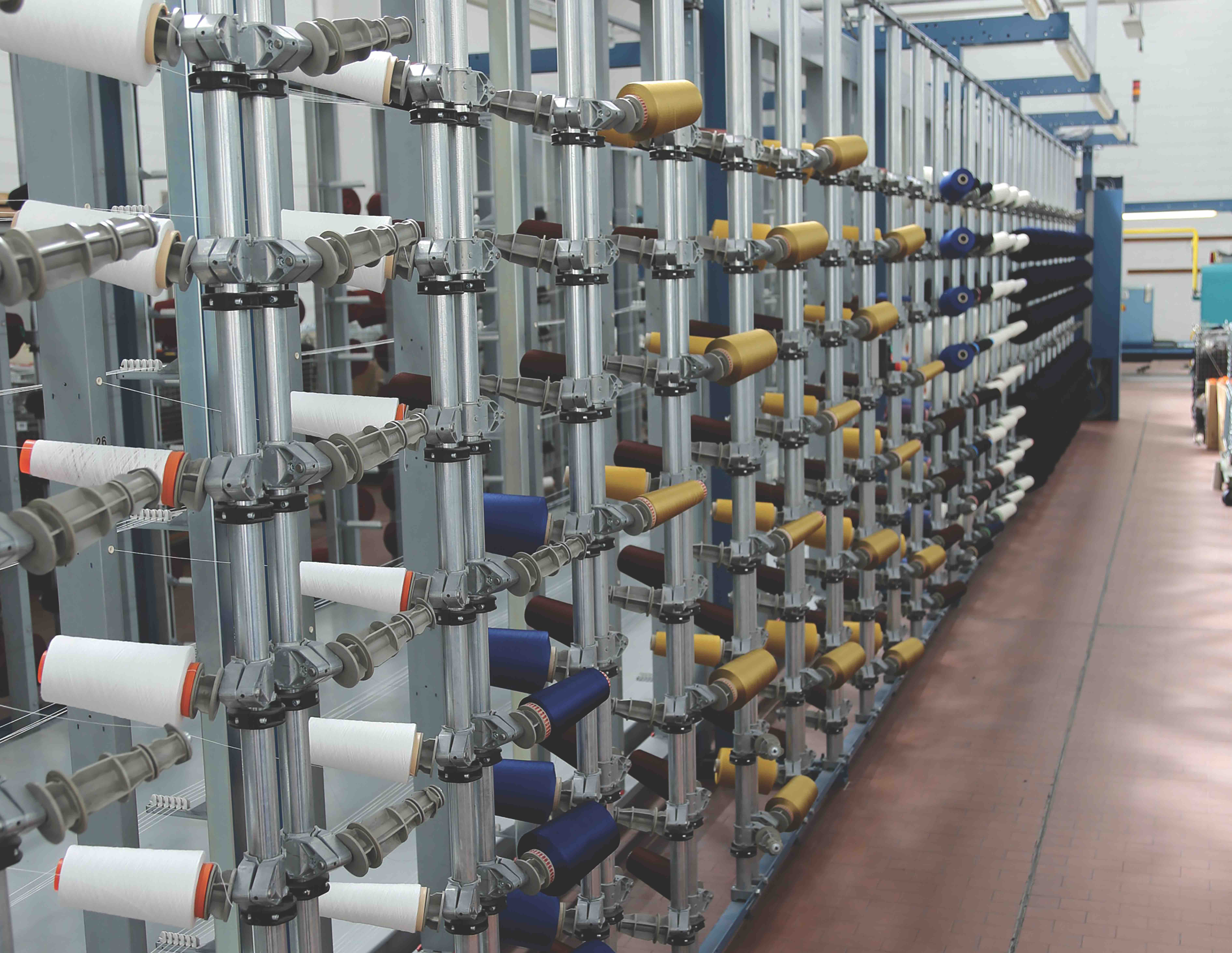 The bales are opened in a special machine – so tightly are they compressed, they could injure or kill as they explode apart – and allowed to sit for a few days to air and expand. We moved into the washing room, where a bath resembling a set from Willy Wonka and the Chocolate Factory takes Merino wool and proceeds to wash virtually all of the Australia out of it, forks dipping and lifting the wool in and out of varying temperatures, the process continuing until white and fluffy wool emerges from the other side. The sooty brown water is diverted to another treatment process, where the lanolin is extracted into blue drums to be transported away.

The wools were next sent to a machine that mixes them together to create a uniform staple (cluster of fibres), which will help the spinners to weave an even thread. Then the wool is carded and combed to straighten and align the fibres and remove any vegetable matter that may have remained from the original fleece. As the machines continued running the wool, it began to look like a mane of hair, turned into a loose rope. This was cabled onto large drums, before being compressed into a wool top.

The same process also holds for mohair, cashmere and indeed, the €4 million-worth of vicuña Andean llama wool that had recently been air freighted here from South America. The Schneiders’ plant runs 24 hours a day, six days a week.

As we prepared to leave, I was shown the power plant, a natural gas-operated engine room that generates the power and steam for the factory. The water, soft from the Italian Alps that framed the backdrop, is drawn from aquifers. There is nothing here that we don’t have in Australia; except that the Italians have spent more than 100 years developing and refining their processing methods. Between that and our wool, it’s a formidable and fruitful partnership. 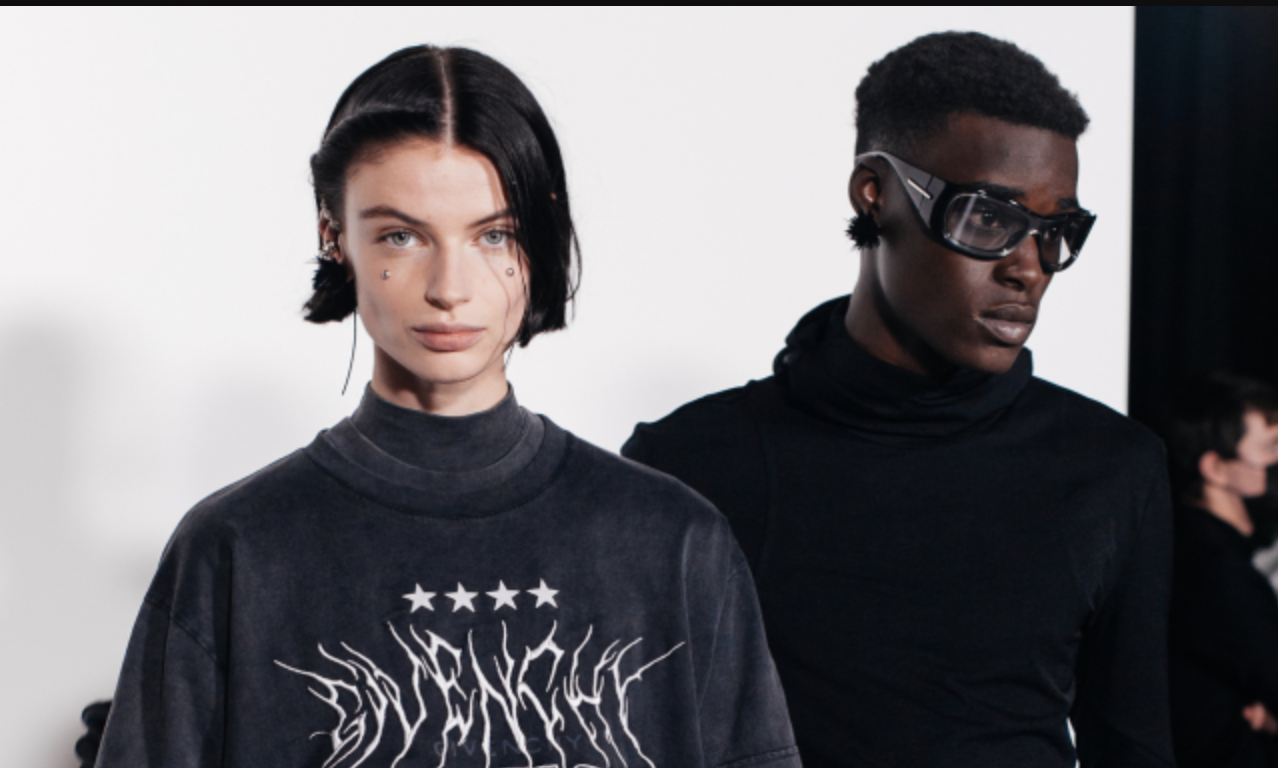