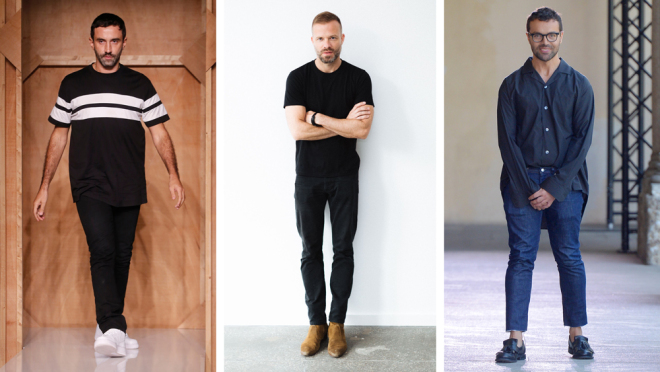 Menswear’s Merry-Go-Round: Everything You Need to Know About the Industry’s New Creative Directors

Consider this your cheat-sheet for the names, faces, and aesthetics making their mark at Louis Vuitton, Dior Homme, and more.

Equating the fashion industry to a merry-go-round is admittedly something of a cliché. Even so, the comparison is not a bad one — silhouettes, prints, and style icons keep going around and around, decade after decade. And in recent years, this type of cyclical shuffling has expanded to those pulling the strings at some of the biggest houses, with creative directors circulating from one position to the next at break-neck speed as brands try to gain a foothold in today’s rapidly changing markets. This creative director reshuffle has been pervasive in womenswear for the last half-decade, and now the trend — as we hope it proves to be — has spilled over into the industry’s other half.

First it was Brioni, which brought in former buyer Justin O’Shea last year in an ill-fated attempt to infuse its dated power-suit aesthetic with youthful energy (Nina-Maria Nitsche seems to be having better luck). And over the past nine months, favourites like Haider Ackerman at Berluti, Kris Van Asshe at Dior Homme and Kim Jones at Louis Vuitton have all handed the reins over to the next crop of creatives (and occasionally, each other). So, with a roster of new names and positions to keep track of, we’ve broken down the few you need to know for both this season and next. After all, the circus has gotten to a point where even the most intimately involved wouldn’t be blamed for carrying around a cheat sheet during fashion week.

Autumn/Winter 2018
With many of the biggest moves announced this past spring, there are only a trickle of collections from new creative directors actually hitting shelves this autumn. That said, the pieces that have cropped up from the likes of Pal Zileri and Eidos, which both have new men at the helm, represent a striking new direction for both brands. 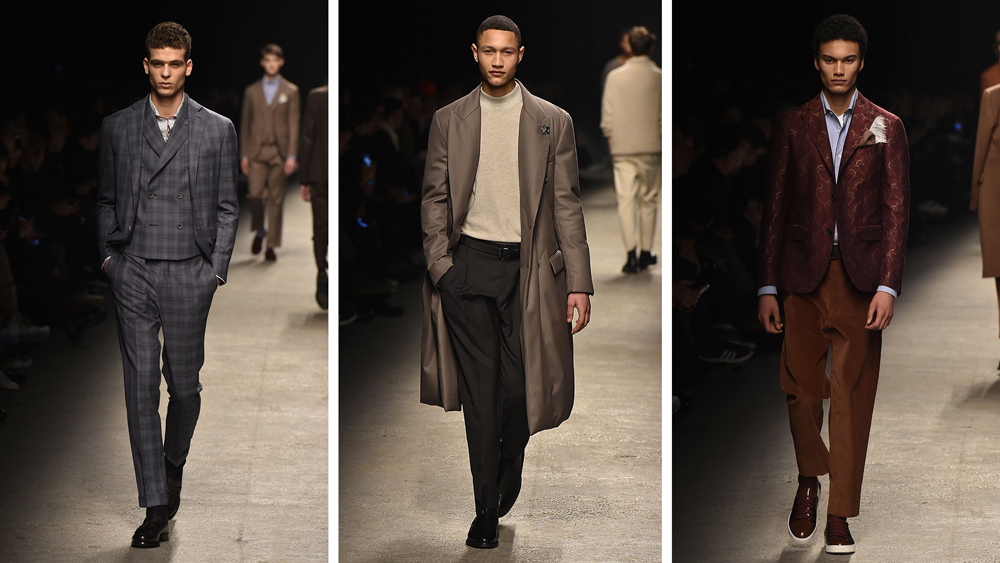 Rocco Iannone’s first collection for Pal Zileri — an Italian tailoring house that has long been a go-to for men looking for that certain kind of buttoned-up spretzzatura — achieves just the kind of loosening up that the brand, previously helmed by Mauro Ravizza Krieger, needed. Having worked in the menswear division at Giorgio Armani for nearly a decade, Iannone is well versed in the language of suiting and separates that blend traditional tailoring with a subtle kind of sexiness. His take on the house’s tailored aesthetic is relaxed — trouser hemlines are shorter (all the better to show off sneakers or a slick pair of boots) and even the most formal jackets are unstructured, with not a tie in sight. Suiting is still where the brand shines, but even three-piece suits don’t read as overly formal; think office-casual for the man who clings tight to traditional codes of nine-to-five dressing. 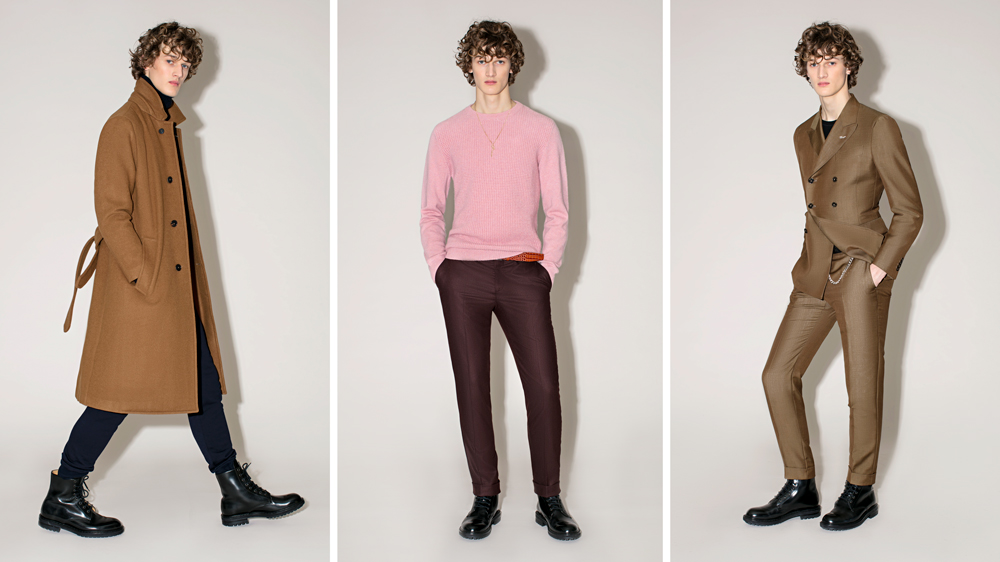 Meanwhile, over at Eidos (a division of Isaia), fresh creative director Simon Spurr has also put his stamp on traditional tailoring. Where Pal Zileri’s autumn collection is relaxed, Eidos is sharp — suits are slim-fitting, colours and patterns are bold. Though the brand was only established in 2013, it still has a well-defined signature Neapolitan aesthetic for Spurr — whose resume includes stints at Saint Laurent, Calvin Klein and Ralph Lauren Purple Label — to work within. So, his loosening up here instead comes from unexpected accessories: jet-black stompy boots and belts embellished with punk-rock chains paired with everything from double-breasted blazers to ultra-soft pink cashmere sweaters. On their own, these pieces couldn’t be mistaken for anything but classic, but as Spurr proves, there is still plenty of room to play.

Rounding out this season’s crop of fresh faces is Ricardo Tisci, who will debut his inaugural collection for Burberry this month. The British heritage brand is one of the few that shows in-season collections (pieces shown in September will be geared for autumn, and available to purchase almost immediately after they walk down the runway), so the designer’s vision for the house is still tightly under wraps. Tisci, who most recently helmed Givenchy, replaces Christopher Bailey, who made waves over his 17 years at the brand.

Though we will no doubt be watching very closely to see if Iannone’s and Spurr’s sophomore collections for their respective brands prove to be as definitive as their first, this upcoming spring will prove to be rich with fresh ideas thanks to a handful of houses with new heads. There are two in particular that you should be paying attention to. 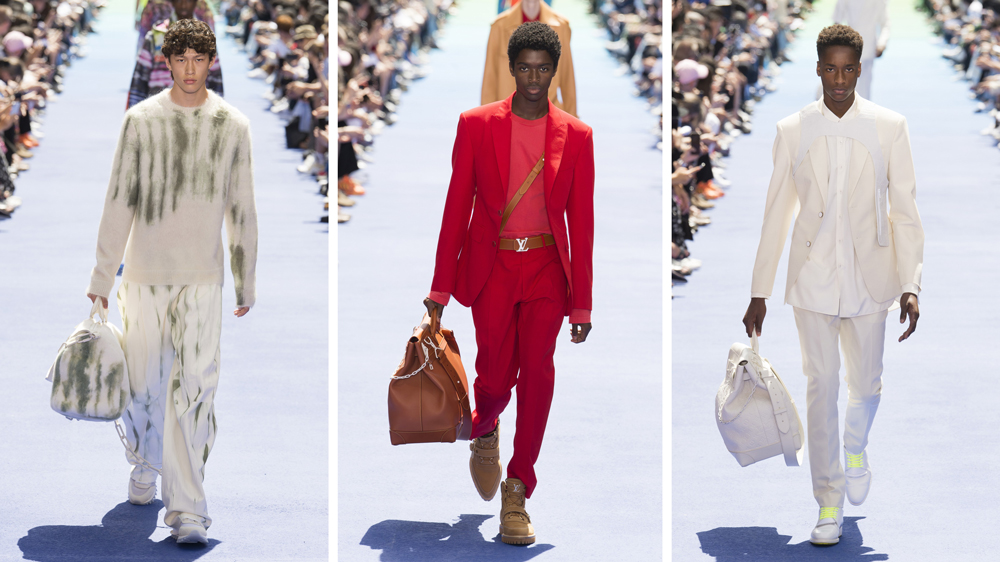 At Louis Vuitton, this autumn marks the final men’s collection from creative director Kim Jones, who modernised the French heritage brand’s menswear division over the past seven years, punching up traditional pieces with streetwear and covetable collections. Virgil Abloh — the multi-hyphenate DJ/art director/designer behind Off-White — has been tapped as his successor. His first collection, which leans into the youthful groundwork laid by Jones, debuted to great fanfare (and many an Instagram post) in Paris earlier this summer. 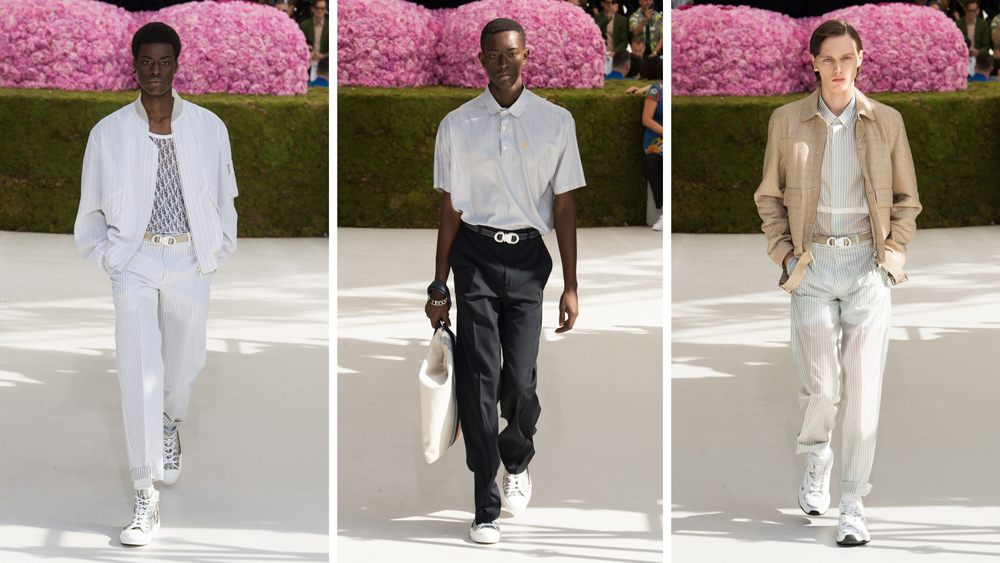 Since leaving Louis Vuitton, Jones has set down roots at Dior Homme, replacing Kris van Asshe as the house’s creative director. Where Ashe’s collections have been resolutely masculine (and often minimal and sporty), Jones’s is proving to be soft, walking fluid, vacation-ready tailoring in creamy whites, tans, and blues down the runway for Spring/Summer 2019. Van Asshe, meanwhile, will debut his first collection as Berluti’s creative director (he replaces Haider Ackermann) with the Autumn/Winter 2019 shows in January.