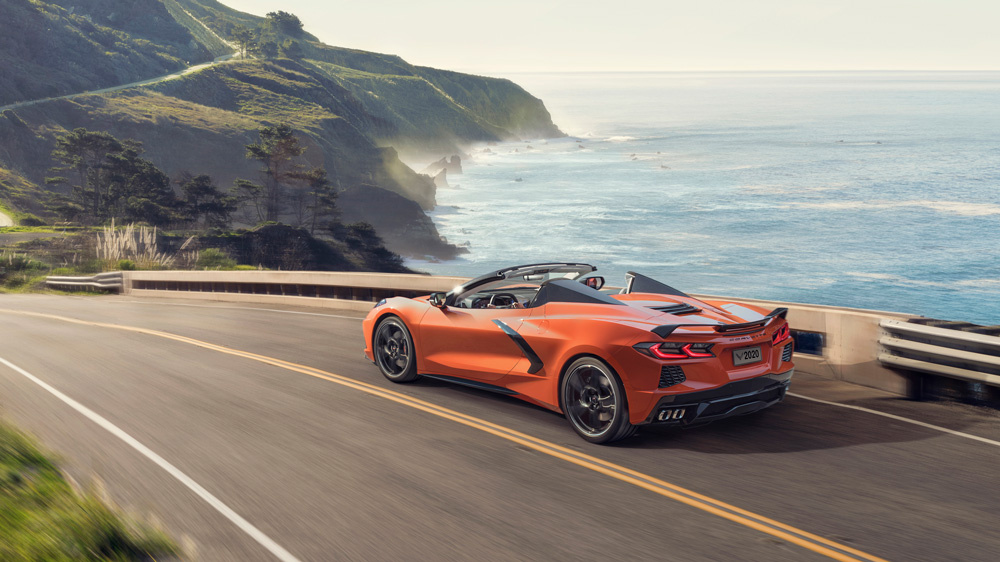 The 2020 Chevy Corvette Stingray Convertible Gets the Hardtop Treatment

The drop-top delivers without compromise and boasts a new benchmark interior for the model.

Since the 2020 Chevrolet Corvette Stingray coupe’s July debut, we’ve known a convertible was in the works. Now it’s here and even sexier than expected. Arguably, the drop-top ‘Vette cuts a more seductive silhouette than its coupe counterpart, but the more alluring variant achieves its extra airiness with virtually no compromises.

Typically, convertibles offer less cargo space than their coupe siblings, but the mid-engine Corvette bucks that trend. Even with the top down, every cubic foot of space in the coupe is accounted for in the convertible, which means you can stow two sets of golf clubs in the trunk. If your golf outing happens to be a getaway, there is also room for a piece of carry-on luggage, along with a laptop bag.

The convertible version of the 2020 Corvette Stingray. Photo: Courtesy of Chevrolet.

The lack of compromise continues with the folding roof itself, which is now comprised of hard panels rather than the fabric of previous Corvette generations. The result is a tranquil interior. With the DJ’s blaring tunes filtering through a chatty crowd at the 2020 Corvette convertible’s launch event in Marina del Rey, Calif., the drop-top made effortless work of attenuating the outside world with a simple switch-flick. It’ll be interesting to see how that closed-cabin serenity translates while cruising on the open road. A power rear window in the tonneau cover should do a good job of keeping wind noise at bay with the top down.

Not only is the convertible’s cargo capacity the same as the coupe‘s, but so are its power figures. Under the vented tonneau sits a 6.2-litre V-8 engine good for 365kW and 637Nm of torque. The available performance exhaust bumps both those figures up by five. Power is sent to the rear wheels via an eight-speed, dual-clutch transmission.

Along with the cliché that the 2020 Corvette Stingray convertible looks fast standing still, it certainly looks striking while seated inside. Corvettes used to be derided for their cheap interiors. The C5 generation’s cabin (1997 to 2004) was aptly described as “Star Trek by Fisher-Price.” Two generations later, Corvette finally got its act together by offering interior quality befitting a sports car priced in the mid-US$50,000 range, but the C8 exceeds expectations with its interior, even when viewed from the outside.

The drop-top. Photo: Courtesy of Chevrolet.

“We would actually hold design reviews—what it’s like when you’re standing at the front of the car looking at it,” says Tristan Murphy, lead interior designer for the C8 Corvette. Murphy says the ultimate goal of this outside perspective is to get the passerby to say, “Ah dude, I gotta sit in this thing. It looks crazy even from this view.”

An interior worthy of the model’s performance. Photo by Manuel Carrillo III.

With the coupe Stingray coming to Australian shores by late 2020 to early 2021, we have high hopes that the convertible will soon follow. However with no official word coming from Holden, fans of the ‘vette will have to eagerly await an announcement.