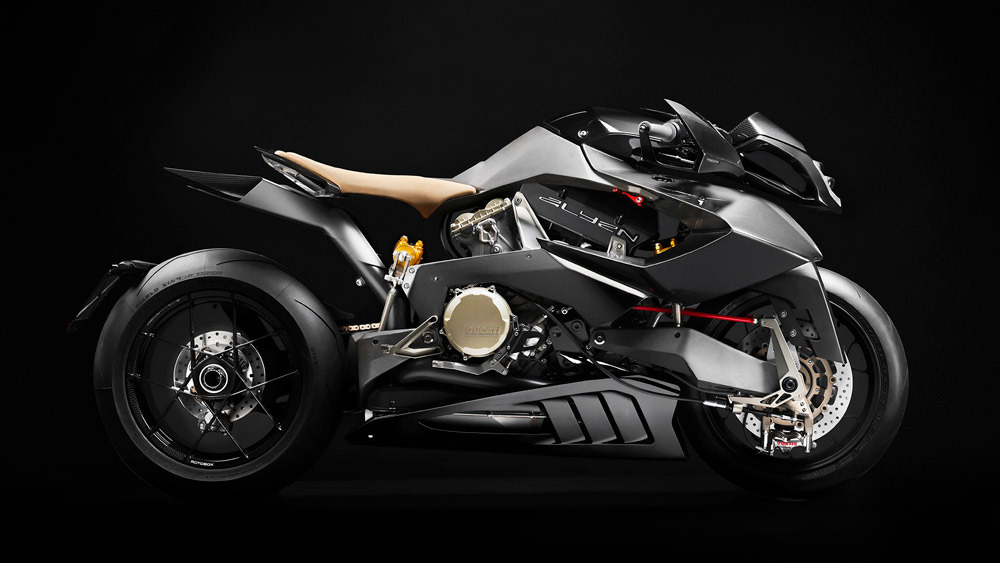 Vyrus’s New Motorcycle Looks Like It Was Designed By Aliens

Before you read on, I implore you to take a close look at this mighty machine. What you’re looking at is the latest creation from bespoke motorcycle manufacturer, Vyrus. Dubbed the Alyen 988, this is a bike the likes of which you only see a few times a decade—if that. The detail is so intricate, so imaginative, it’s difficult to know where to begin to describe it. But first, a little background.

Vyrus has been building avant-garde motorcycles in its factory in Coriano, Italy, since 2003, under the helm of Ascanio Rodorigo—a man who gives TED talks on engineering and turning long-held dreams into commercial success.

Originally part of Bimota, Vyrus is known for the use of hub-centre steering, whereby the front suspension, braking and steering forces are separated. This design helps maintain the correct steering geometry under braking, through a corner, and under acceleration. However, this all comes at the expense of some of the feel that riders have been conditioned to over the years through the employment of traditional telescopic forks.

Vyrus even had a go at building a Moto2 grand prix racer back in 2011. That particular machine wasn’t successful enough for full-time grand prix action, but did enjoy some success in the Spanish championship and morphed into the 982 M2 Strada that Vyrus is still producing.

That brings us to today’s Alyen. Born from a sketch by MV Agusta Design Director Adrian Morton, the Alyen went through 57 different versions over nine years before the team finally settled on what you see here. And, unlike traditional design, no clay models were produced.

Carbon fibre and magnesium are used throughout the construction of the bike. Photo: Courtesy of Vyrus.

The motor has been donated by Ducati and is the specially tuned Superquadro 1299 (1,285cc), the last traditional Ducati V-twin superbike motor. Vyrus claims over 149kW for the Alyen, yet, surprisingly, this is probably the least interesting part of the roughly 165kg model.

The motor is encased in a magnesium Omega chassis, which allows for the use of the flat front swingarm. The frame is essentially a C-shape, which frees up much needed space around the front of the motorcycle for the required steering parts. This chassis design was pioneered by Bimota with the first Tesi model, and later Yamaha adopted it with the GTS 1000.

The Alyen 988, powered by Ducati’s Superquadro 1299 engine, is claimed to have 149kW. Photo: Courtesy of Vyrus.

Magnesium was also used when creating the front and rear swingarms, the foot pegs, shift lever, anchoring beams and the anti-dive suspension. The rear-suspension shock absorber is an Öhlins TTX40 unit and sits directly under the carbon-fibre seat, perpendicular to the swingarm, while Brembo supplies the brakes in either 320mm carbon-ceramic discs/four piston calipers, or racing spec 320mm T-drive discs.

For the controls, there are no exposed wires, as everything has been moved inside the hollow handlebar. Photo: Courtesy of Vyrus.

Vyrus employs what is calls an HWSS (Hydraulic Wired Steering System), whereby two steel cables are tied to the end of the handlebar and connected to each side of the front wheel. Everything is separated—the steering, in effect, working in remote control. If you’ve ever ridden a hub-centre–steering design, it’s a strange sensation at first—almost like greeting someone with a left-handed handshake.

The Alyen’s self-supporting body is carbon fibre with enormous attention paid to ensuring the design resembles a living creature, a process Vyrus calls “organic engineering architecture.” The body is made using various layers of impregnated fabric, all arranged in a single direction to give the same visual aspect as refined wood grain. Carbon fibre also extends to the wheels, which are exclusive five-spoke items created by Slovenia-based Rotobox.

Moving onto the controls, there are no exposed wires, as everything has been moved inside the hollow handlebar to give a minimalist look—which is about the only time you could consider using that term when describing the Alyen.

Even for a creative tour de force like Ascanio Rodorigo, the Alyen has truly set a benchmark for original thinking and design. It’s no wonder the bike will most likely cost north of $140,000, although pricing has yet to be announced.