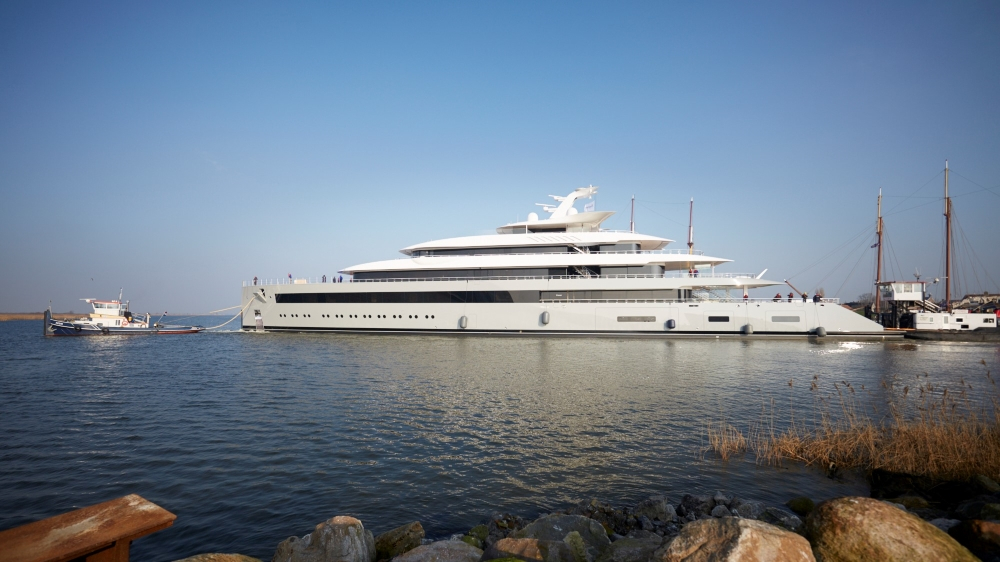 It’s the largest yacht built by the shipyard to date.

Feadship has taken one giant leap with the launch of its latest megayacht, Moonrise. Unveiled on February 7, the epic 100-metre vessel is now the biggest to be built by the Dutch shipyard and boasts a ton of star power.

Designed by Studio De Voogt, Moonrise marries sleek lines with a modern masculine profile. She features a striking vertical bow, an elegant grey hull with a glass-clad superstructure and expansive hull windows that reinforce the modern feel of the vessel.

The naval architecture has been optimized to provide maximum levels of comfort and efficiency: Her propeller and appendages have been designed to ensure minimum noise levels, while a streamlined hull and Quantum stabilizers allow her to cut through the seas with ease. Powered by twin MTU engines, Moonrise has a top speed of 19.5 knots and her cruising speed is 16 knots.

Thanks to her impressive length and 15.2-metre beam, Moonrise boasts a generous interior. Penned by Rémi Tessier Design, the “sophisticated yet minimalistic” space features high ceilings, flush decks and eight oversized staterooms to accommodate up to 16 people. The luxurious crew quarters can fit up to 32 staff and promise a premium standard of living for those working on the yacht. Of course, she’s also fitted with all the luxury amenities one would expect, including a helipad on the foredeck, a large beach club aft and top-notch gym and wellness areas.

Like every new Feadship vessel, Moonrise champions sustainability: Exhaust gas treatment has been fitted to the main engines, while a heat recovery system installed on the generators allows the jacuzzi water to be warmed up using far less electrical power.

Over the past 70 years, Feadship has been credited with dozens of launches and has grown into an undeniable superyacht powerhouse. Last year, the shipyard launched the 77-metre Syzygy 818, the 58-metre Najiba and the 93-metre Lady S. And the latest star, Moonrise, with its incredible 100-metres, will clearly carry on that legacy.

Check out more photos of Moonrise below: