The epic vessel should be in action later this year.

Turns out even a foggy February morning can’t stop a certain superyacht from shining. German builder Lloyd Werft recently launched its newest 145-metre vessel from the Bremerhaven yard and it looked nothing short of spectacular even amid a hazy, opaque sky.

The sizable vessel, which was christened Solaris, began outfitting in 2018 and is one of the largest superyachts to hit the water so far this year. In a YouTube video shared by the yard, the behemoth can be seen segueing from the floating dock to the Kaiserhaven basin with the help of two tug boats.

While few details have been shared regarding the long-clandestine design, this sneak peek showcased her elegant exterior, which is characterised by clean lines, a light grey hull and a crisp white superstructure. With no less than eight decks, the behemoth appears to come equipped with all the requisite amenities for global expeditions, including a helipad, a beach club aft, and a crane to launch tenders, toys and/or subs. 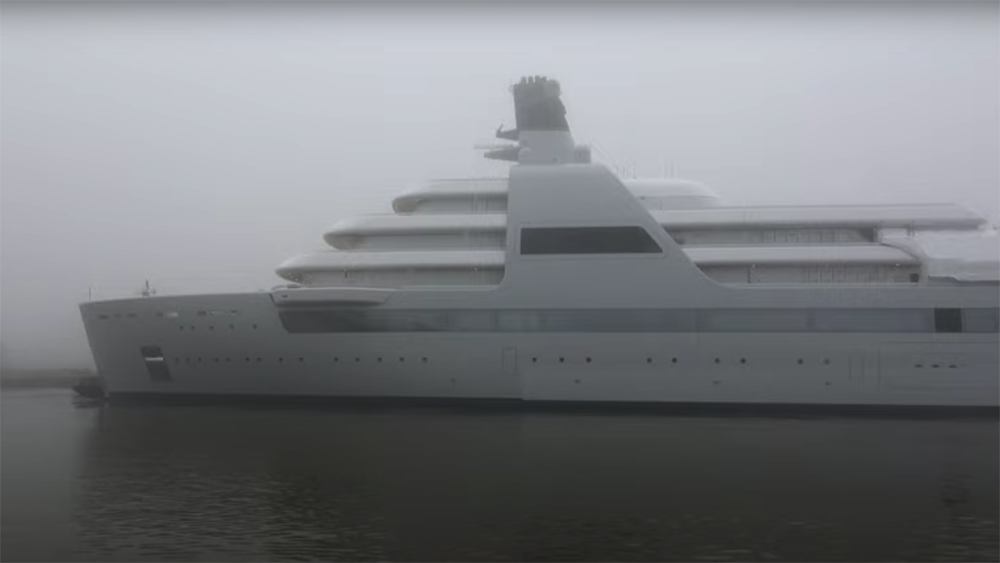 Solaris emerging from the fog on February 28. Lloyd Werft/YouTube

Solaris is also fitted with a power and energy management system from ABB that features two Azipods powered by 9 megawatts. This is the most powerful of its kind ever installed on a yacht, according to Superyacht Times. For the unversed, an Azipod is a gearless steerable propulsion system where the electric drive motor is in a submerged pod outside the ship hull. The units can rotate a full 360 degrees to increase maneuverability and efficiency while reducing fuel consumption.

Lloyd Werft, which belongs to the Genting Group, has a background in building cruise ships and thus is adept at delivering vessels of eye-popping proportions. (You may remember the 115-metre explorer yacht Luna that launched back in 2010.) This particular custom cruiser is reportedly being built for the billionaire owner of Chelsea Football Club, Roman Abramovich, and is estimated to cost $770m (£430 million) as reported by The Times. (Robb Report reached out to Lloyd Werft for comment but the yard is yet to respond.)

It will likely be the last Lloyd Werft vessel to leave the Bremerhaven yard, too. LWB spokesman Marco Graudenz told The Motorship the storied shipbuilding facility, which dates back to 1857, will close at the end of the year because of the ongoing Covid-19 pandemic. Local German shipbuilding group Rönner is among those interested in buying it.

Although the official delivery date for Solaris remains top secret, the vessel should be in action later in 2021. It will join a spate of new super-sized superyachts on the high seas, including Lürssen’s 142-metre superyacht Nord, Feadship’s secretive 88-metre Project 816, and Oceanco’s 118-metre steel-hulled vessel Y719.