This Superyacht Has The Best Beachclub In The Business

Sanlorenzo’s SX112 has a jaw-dropping feature that needs to be seen.

Hull number one of Sanlorenzo’s SX112 exudes a uniquely Italian sense of cool. Arriving at 34-metres, the transformational vessel boasts plenty of ‘wow factor’ courtesy of the open space on the boat’s stern and side arches. At anchor, the drama is heightened with the vessel’s rear side panels folded down and the open salon windows linking the inner sanctum to the outer deck.

The combined beach club/social area is closer in size to a custom superyacht that’s 15-metres longer, plus the minimalist styling looks years ahead of its competitors.

“Since my first boat, my goal has always been to maximize contact with the sea,” says Luca Santella, who founded Bluegame Yachts in 2005, and remains as head of product development for the brand under its new owner, Sanlorenzo.

Santella worked magic on the recently launched Bluegame 70, fusing the main suite of a superyacht with a trawler-like upper helm area, along with—naturally—an open transom. What could’ve been a Frankenboat was instead a graceful, first-of-its-kind mini-explorer. 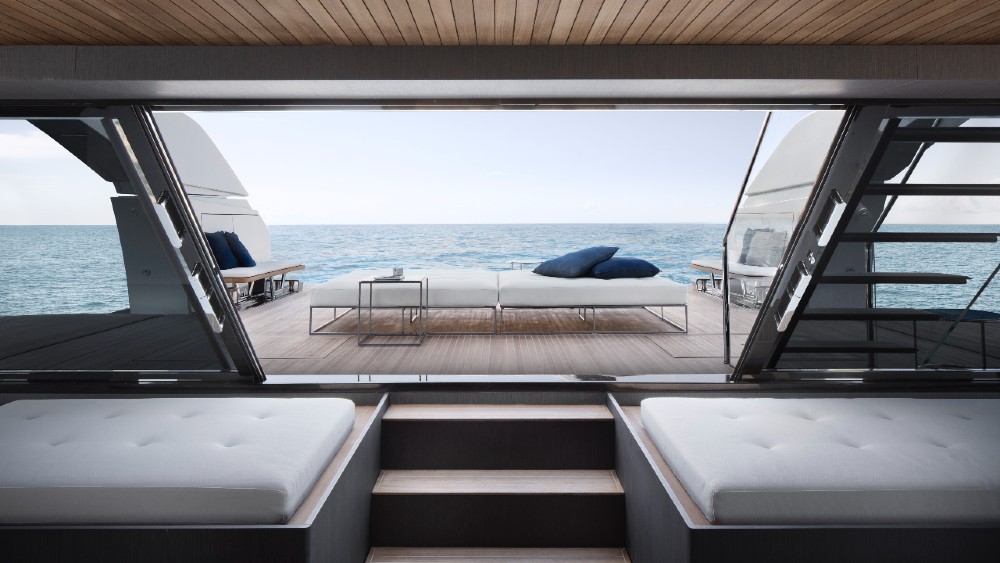 The lower salon connects via opening doors and side panels to the stern, creating a vast social area that touches the water. Courtesy Sanlorenzo/Thomas Pagani

Charged with designing Sanlorenzo’s SX line, Santella’s goal was to bring superyacht owners and guests closer to the sea by meshing the open transom and main salon, while retaining the sense of style that the Italian brand is known for. The adventurous SX series was a gamble for Sanlorenzo. Its chairman, Massimo Perotti, had taken a little-known regional brand and turned it into an international powerhouse. But he had built its growth around beautiful motoryachts—the boating equivalent of a perfectly tailored suit with an elegant but very classic look, with no rough edges or, in the SX’s case, extended transoms.

Santella was able to combine style with a bit of edge on the SX88, launched three years ago, and in the smaller SX76, which came out last year. “But we didn’t want the SX112 to just be a bigger 88,” he says. “We saw the possibility of linking the main salon with the beach club area, and then we realized we could open it up even more with fold-down panels along the sides.”

The result is not exactly an explorer yacht, which typically has a rougher, more angular shape, but a vessel that water lovers will relish. The open transom, with a centre platform that drops into the water for tender launching or scuba diving, has two lounges, giving an open feel, while linking the main salon expands the space, and offers an interior oasis. “The main deck is closer to the water than a traditional yacht design, so provides immediate access,” says Santella. “It also lets people enjoy their days on the water. They could never do it before with closed transoms.” 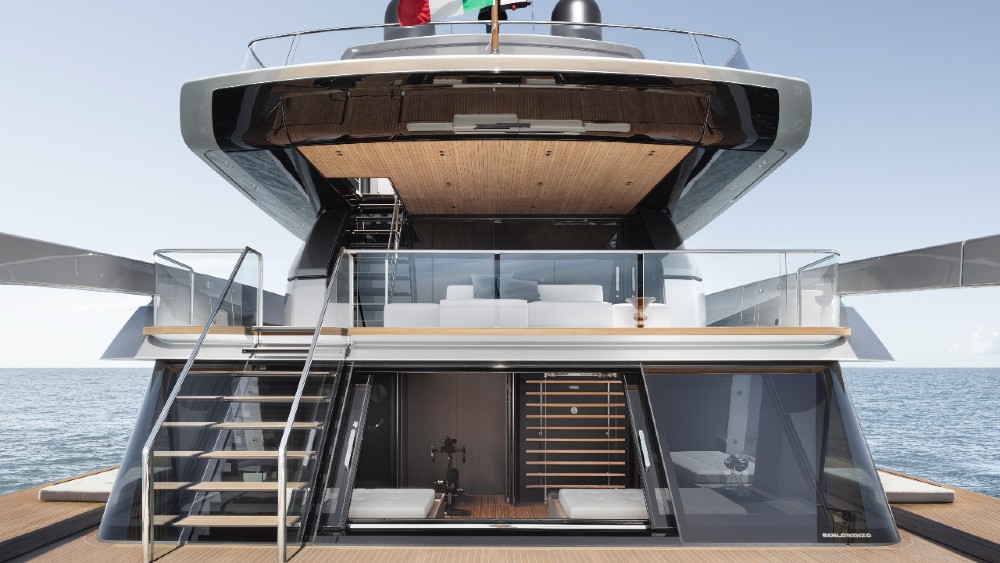 The lower salon uses an area that would typically be either storage or guest staterooms. It also connects to the mezzanine of the next deck up, giving a split-level social ensemble. Courtesy Sanlorenzo/Thomas Pagano

Beyond the aesthetics, the open stern has innovative designs like the arm that raises and lifts the tender from the water, but then swings back into place as part of the starboard arch. Rather than having the awkward appearance that these on-board hoists typically have, it blends in seamlessly with the profile. The same goes with the fold-down windows and opening doors. There could’ve been potential flaws with this concept—both with the aesthetics and function—but the designers created a harmonious look. Santelli’s team also got the proportions just right: The SX112 is neither too tall or boxy for its length, but appealing to the eye.

Sanlorenzo worked closely with naval architect Piero Lissoni on interior décor and modifications to the cockpit, while yacht designers Bernardo and Martina Zuccon of Zuccon International did the exterior lines and general arrangements of the decks.

The yacht’s interior is modern but subtle, blending Alpi Xilo wood walls with a parquet floor and tatami ceilings. The décor is a mix of bespoke furniture—like the custom lounges and dinner table on the flybridge—to high-end sofas by B&B Italia, tables by Living Divani and daybeds by Fritz Hansen. The dining table on the second deck is by Porro, using green marble sourced from quarries near Sanlorenzo’s facilities. 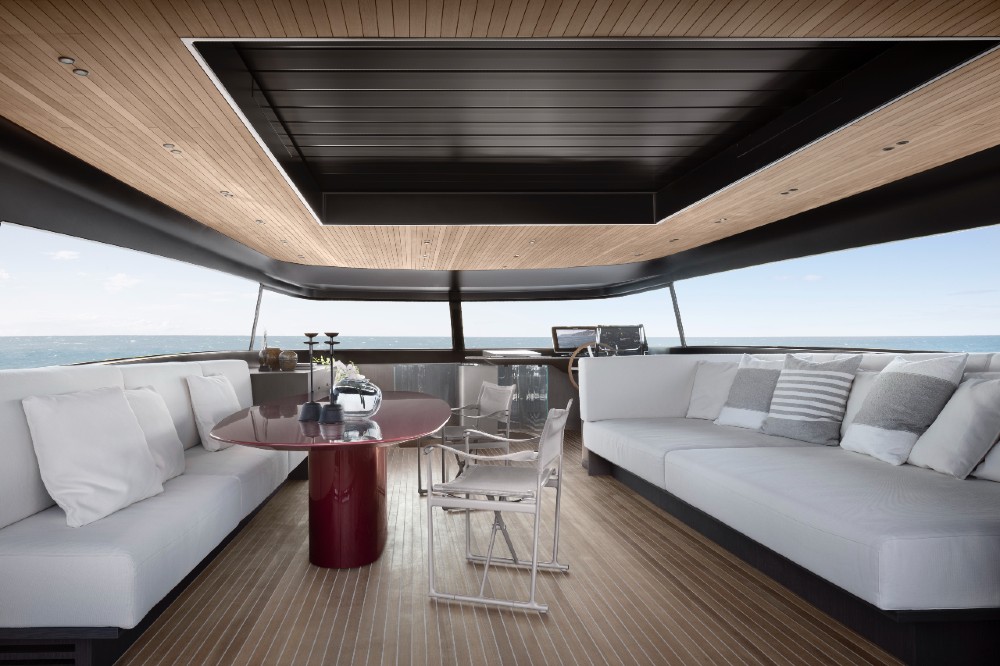 The top deck has the boat’s only helm area, but that’s tucked away to the front, while the lion’s share is given over to lounges and exceptional views. Courtesy Sanlorenzo/Thomas Pagano

The top two decks share the open feel of the lower deck, with large windows and open aft mezzanines. The upper deck incorporates the boat’s only helm station, tucked away in the right corner, with two white lounges turning the area into more of a social enclave. A slatted roof can turn it into a sun palace or shaded, sealed room.

The four staterooms on the lower deck include the main suite and four guest bedrooms, all with strong natural lighting. The yacht has four layouts with different numbers and sizes of staterooms.

“There’s a culture of customisation inside this company,” says Santella. “Owners often come to the yard in order to choose specific blocks of marble from local quarries. There’s an unusually high level of detail across the interior.” The designer’s favourite areas, the open transom and connected salon, eschew architectural details in favour of an open, understated look. 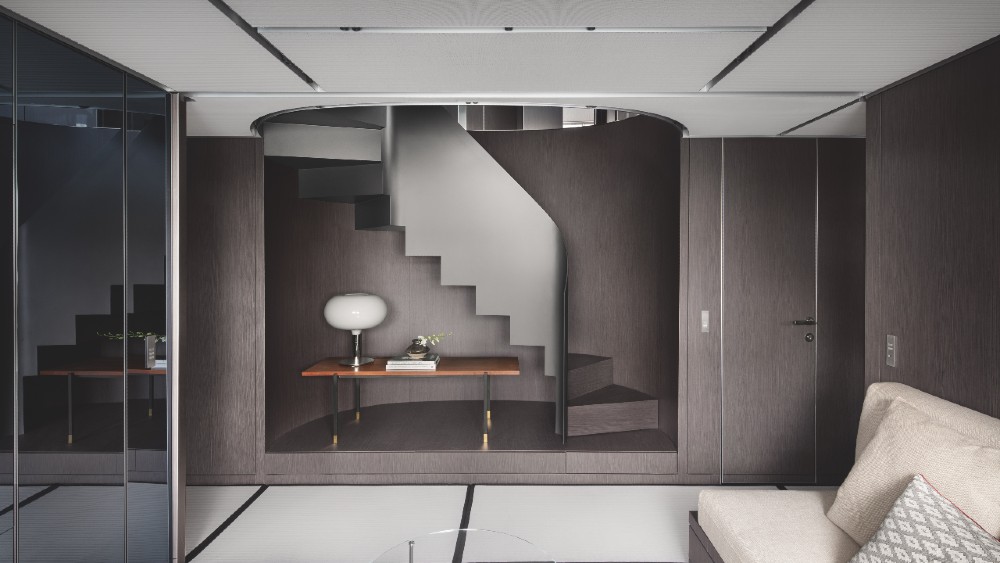 The minimalist look is carried across the interior, even into the lobby that joins the different decks with its modern circular staircase. Courtesy Sanlorenzo/Thomas Pagano

Beneath the lower deck’s clean look, the engineering team was able to find space for the four Volvo Penta D13 IPS1350 engines, which produce a top speed of 23 knots and efficient cruise from 10 to 20 knots. The pod drives not only freed up hull space for more room below decks, but also help with maneuvering the yacht. Volvo says this is one of the largest yachts on which it has installed a quad engine configuration.

For Santella, the SX112’s unusual layout and performing hull is more than the sum of its parts. “We feel like this was the first really fresh design to come into yachting for a long time,” he says. “In the end, we didn’t have to sacrifice anything, but gained a new way of living on the water.”