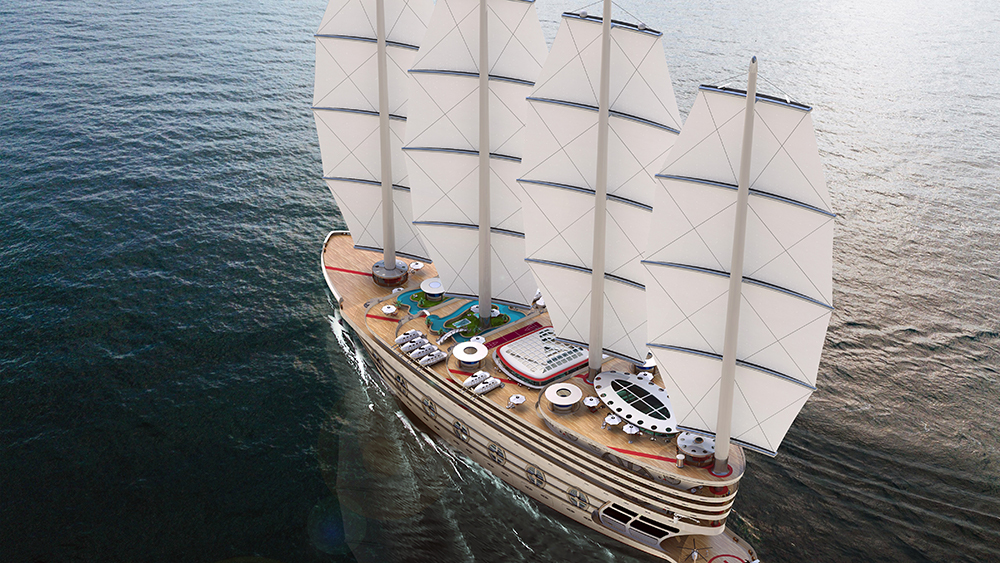 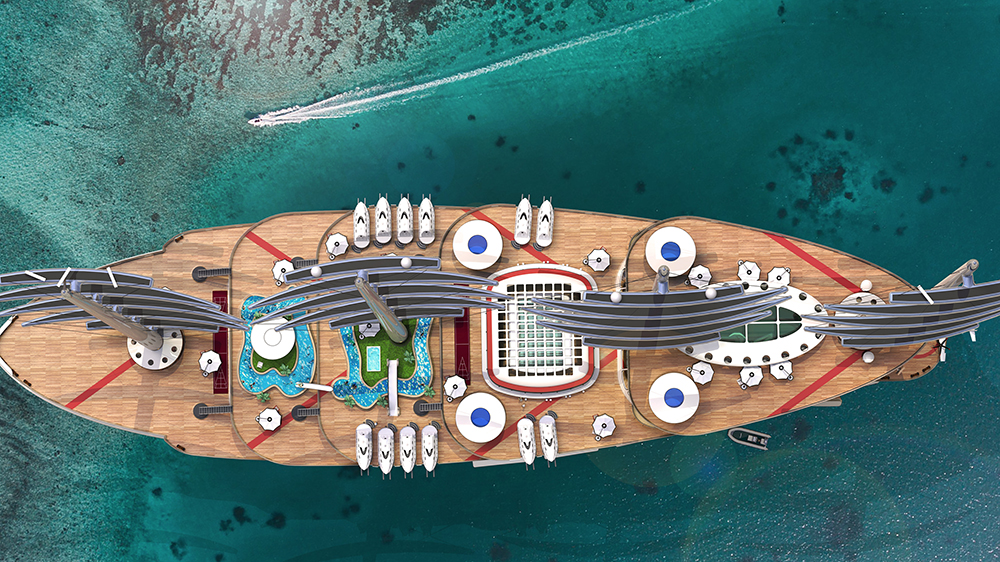 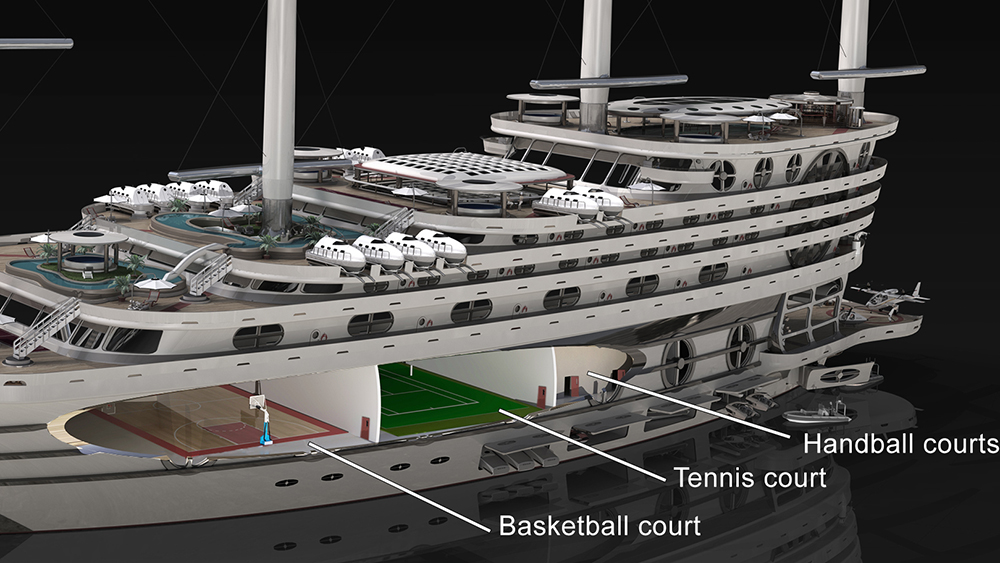 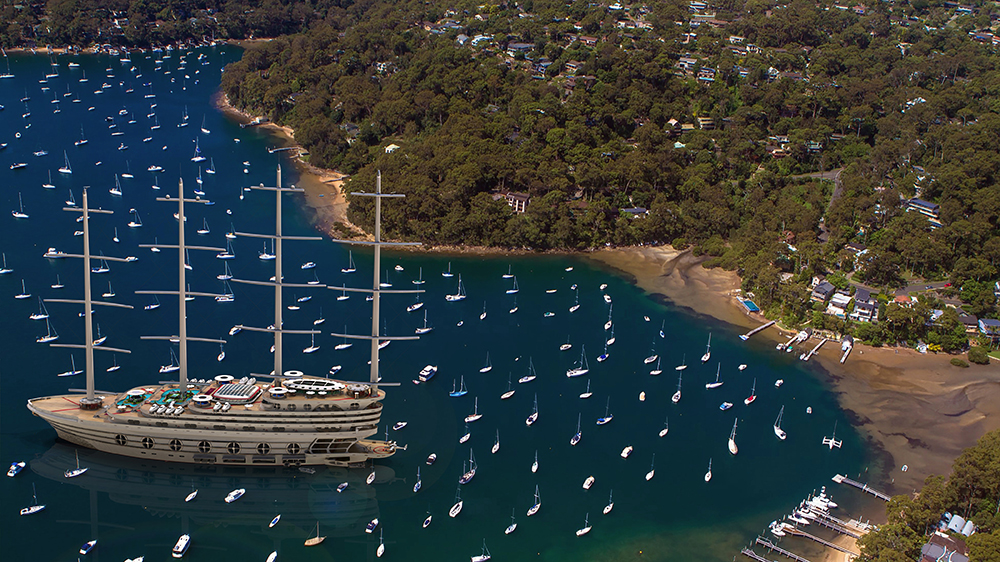 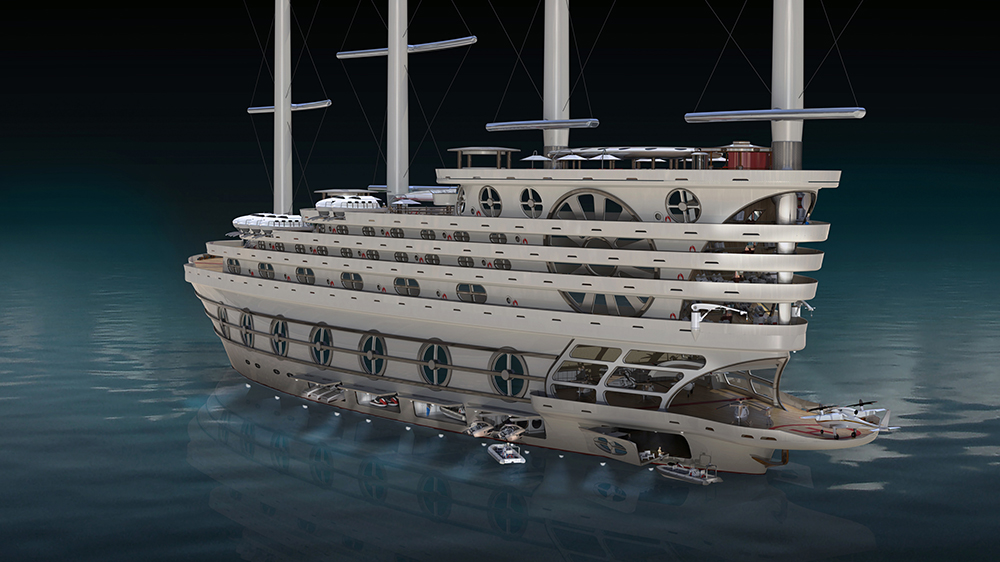 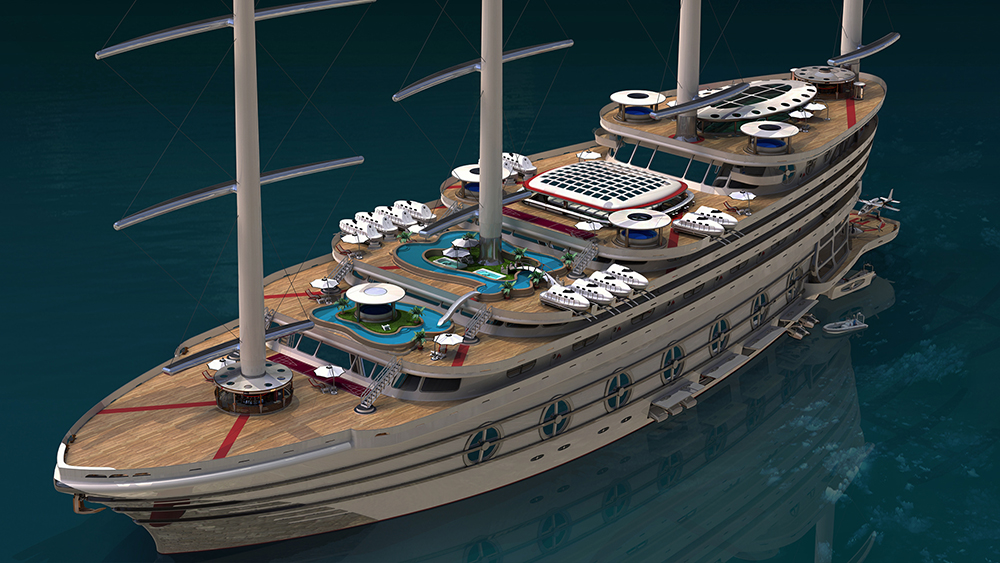 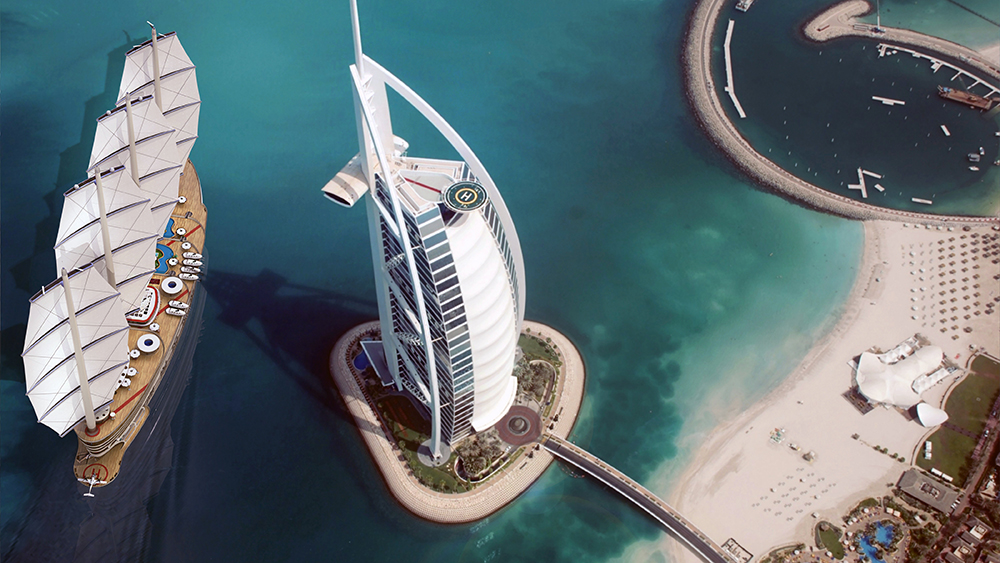 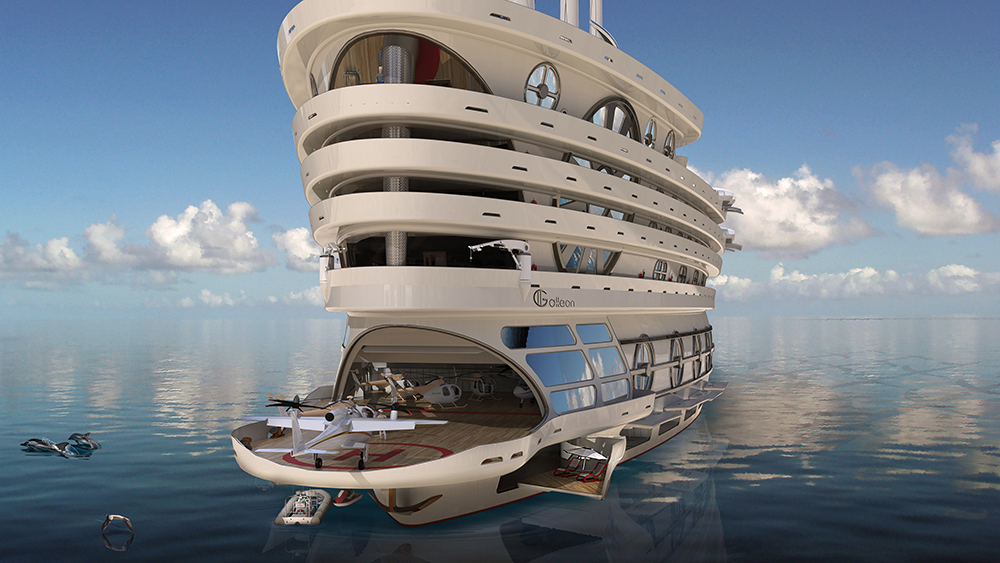 This Sailing Gigayacht Is a 21st-Century Galleon

It looks like the galleon is making a comeback—that is, if Steve Kozloff has his way. The designer just unveiled a new gigayacht concept that’s inspired by the multi-decked sailing ships of yore but is outfitted with enough modern-day amenities to rival an amusement park.

Galleons, which were first used as warships by the European powers in the 15th century, typically featured three or more decks and masts for a truly undeniable presence. Kozloff’s epic 162-metre vessel, aptly titled Galleon, goes even further with an eye-popping eight decks and four towering masts. Together, this gives the vessel enough space and power to rival an ocean liner.

Galleon is also a lot stronger than her wooden predecessors of the Age of Sail. The vessel features a steel ice-class hull and aluminium superstructure that give it true go-anywhere capabilities. She’s more versatile, too, with the ability to be a luxury cruise liner for up to 200 guests, a private residential vessel with 20 high-end condos, or a personal gigayacht for one. 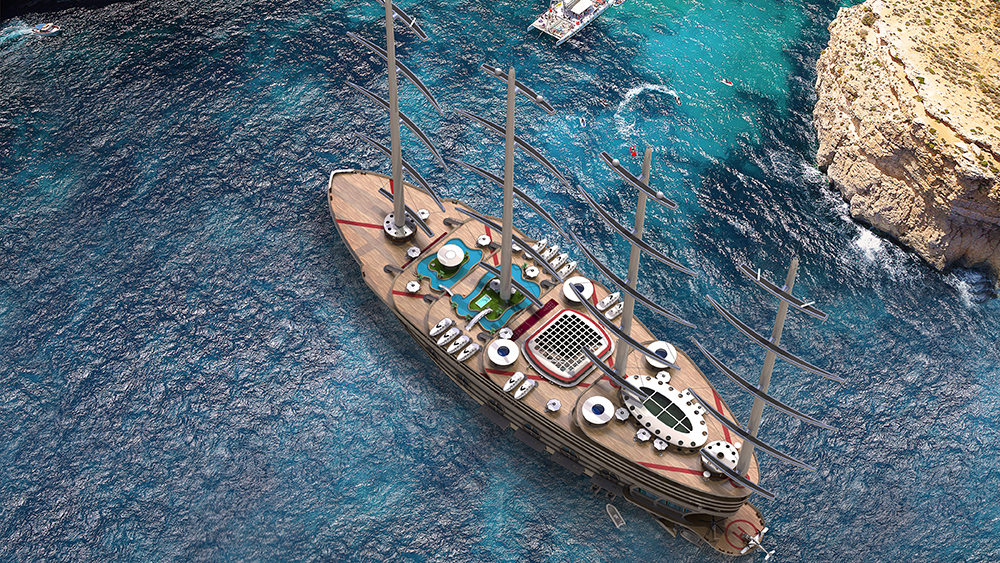 The two river pools forward are connected by a waterslide. Steve Kozloff

The sprawling interior is fully customizable, and Kozloff says it can be fitted with cafés, bars, restaurants or even a park. The pièce de résistance, however, is the indoor sports centre, which comprises a full-sized basketball court, tennis court and four handball courts.

Galleon’s exterior is nothing to sneeze at, either. The upper deck aft features a lounging area, full bar and oversized pool. One level below, the bridge deck offers another indoor pool. According to Kozloff, both pools would feature automated hardcovers that turn them into gazebos when not in use. The upper forward decks also sport two river pools that are connected by a waterslide. 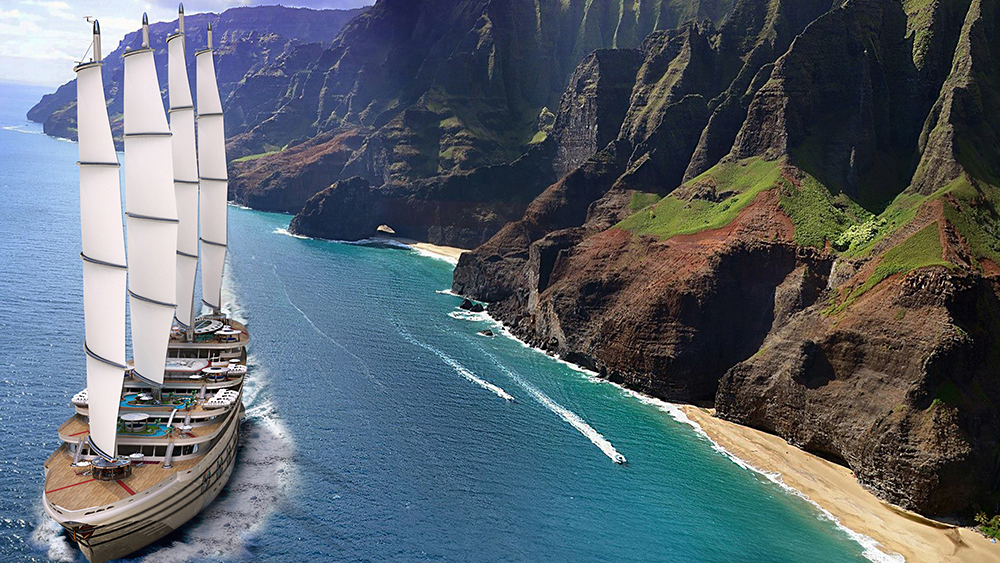 The vessel has a maximum speed of just shy of 19 knots. Steve Kozloff

To top it off, the vessel features a fully enclosed hangar that spans 418sqm and offers space for up to 10 helicopters as well as an aircraft maintenance facility. There’s also an additional landing area for any guest helicopters.

As for propulsion, Kozloff envisions Galleon with five diesel-electric engines that would together deliver 10,000 hp. She’s also equipped with four DynaRigs that give a total sail area of 9775sqm and supplement propulsion with wind power. The vessel has a touted max speed of just shy of 19 knots and could theoretically cover 10,000 nautical miles while travelling at the leisurely cruising speed of 10 knots. Kozloff added that Galleon could also be hybrid or electric.

“I wanted to encourage the cruise ship industry to be more green,” he told Robb Report via email. “Of course, this yacht could have all types of hybrid and battery propulsion in lieu or in combination with sail power.”

Now that’s a galleon of the 21st century.