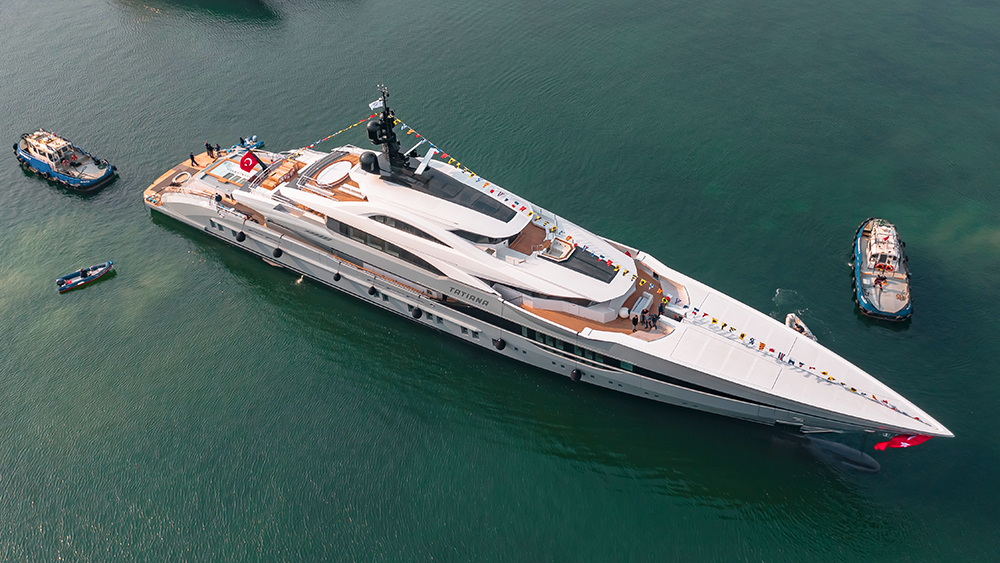 There’s a new king of the seas in Turkey.

Better known for baklava and kebabs, Turkey’s yachting industry ranks third among the world’s largest superyacht-building countries. With relatively low wages and skilled labour, Turkey has created an impressive collection of brands on the Mediterranean that include Sirena, Turquoise, Dunya, Vicem and dozens of smaller shipyards.

Bilgin this week launched Turkey’s largest-ever superyacht, an 80-metre tri-deck design that left the shipyard at the West Istanbul Marina on its own bottom for final fit-out. It will be delivered later this spring or by early summer. Bilgin also has two other projects under construction in the same 80-metre series, as well as a 67-metre scheduled for launch in 2022, and a 50-metre on the books. These multiple projects have pushed it to the top of Turkey’s list of superyacht builders.

The series, all with steel hulls and aluminium superstructures, feature a special filtering system that delivers 100-per cent emissions-free exhaust. That new technology promises to nudge other yacht builders forward when it comes to sustainability.

Unique Yacht Design’s exterior, with a maximum beam of 12-metres and a draft of 3.3-metre, presents an interesting dichotomy: It is sleek, even svelte, while maximising interior space. “We created a very attractive yacht with a sleek and sexy profile while avoiding high-dosage design clichés,” says Emrecan Özgün, CEO of the Istanbul design firm, referring to the often-boxy shape of other high-volume motoryachts its size. “The increase in living areas normally results in bulky designs. By contrast, the Bilgin 263 has a design attitude that will dominate the yachting sector around the world.”

London-based H2 Yacht Design created the interior, using strong contrasts with Macassar ebony, eucalyptus and multiple marbles. H2’s Toby Sturge said the owner wanted a layout that “was unique to his own requirements,” but also different from other 80-meter yachts on the market. “Timeless understatement is the recurrent theme on board,” said Sturge.

The displacement hull delivers a top end of 20 knots, while her cruise speed of 12 knots transforms the yacht into a fuel miser, consuming only 250 litres per hour. Built to comply with IMO Tier III certification, Bilgin says its new launch is not only Turkey’s largest superyacht, but the “most environmentally friendly yacht in her class.”

Check out more images of Bilgin 263 below: