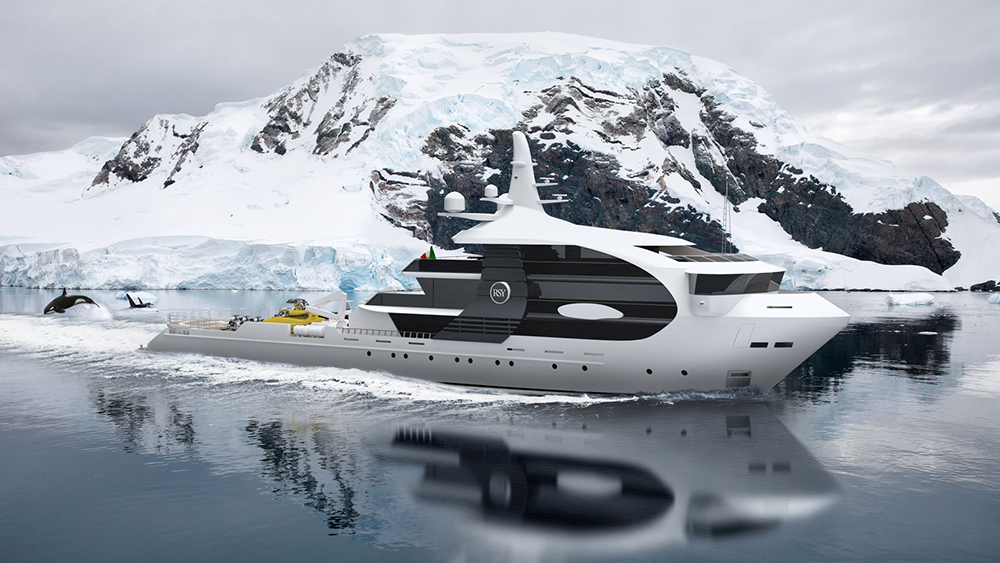 If Free Willy were a superyacht.

Given their sleek lines, elegant monochromatic colour scheme and a predilection for long trips through cold waters, it’s no wonder the world’s largest mammal has become a muse for yacht design. The Italian shipyard Rosetti Superyachts has just unveiled a killer new concept inspired by none other than the killer whale.

Dubbed Project Orca, the 213-foot (65-metre) ice-classed explorer yacht is designed to soar through the world’s oceans—from the Arctic and Antarctic to the tropics—just as whales do. Developed in collaboration with Meccano Engineering, the robust cruiser features bold superstructure styling, wrap-around glazing and a radar mast which mimics a dorsal fin. The palette follows suit, resembling that of a killer whale, including a white side patch at the owner’s deck that can be illuminated in the evening.

“The organic design traits mimic the orca or killer whale, the largest and most powerful member of the dolphin family,” Rosetti Superyachts chairman Fulvio Dodich said in a release.

Not to be upstaged by its real-life counterpart, Project Orca comes complete with gutsy twin CAT 3512 1398kW engines which offer a basic range of 8000 kilometres at an economical cruising speed of 12 knots—more than enough to ensure you keep up with the pod.

Since the mammoth vessel is designed to traverse the most remote and extreme areas of the planet, there’s also space for cranes and a helipad, plus a large garage for tenders and water toys.

Dodich believes the construction time on the vessel would be approximately three years, but the yard will be ready to start building immediately. “We have already done the concept engineering and completed the technical specifications for Project Orca, and if we sell the boat tomorrow and want to make a start on it, we can begin construction.”

New Zero-Emission Electric Air Taxi Will Be Flying Over LA

Archer’s Maker eVTOL is part of a regional plan to connect much of Southern California by a network of electric air taxis.

The 110kW motorcycle is as elegant as it is powerful.