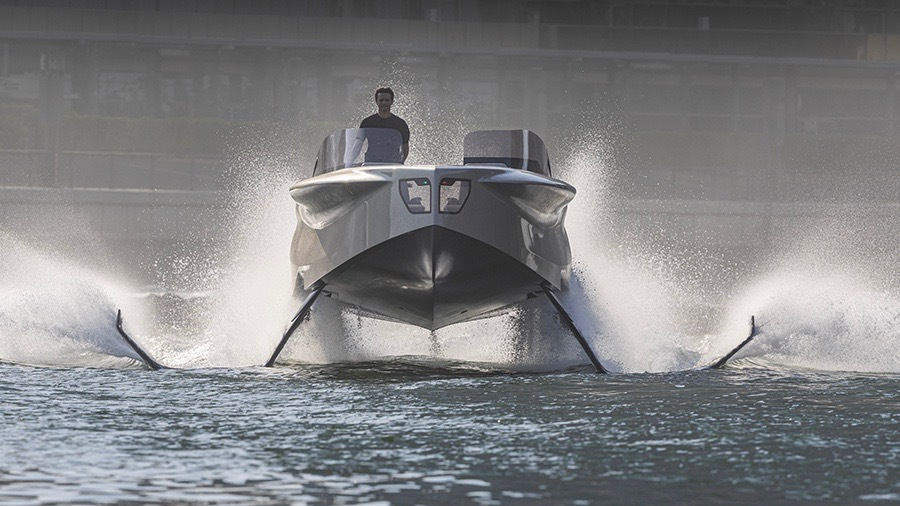 A joystick controls the hybrid propulsion system on this speedy carbon-fibre day yacht.

At 18 knots, Enata‘s 10-metre Foiler flying yacht takes flight five feet above the waves, eliminating seasickness and providing passengers with a smooth and quiet experience—no chop-chopping through the waves. You’re gliding through the waves. Riding that high, passengers avoid spray and the powerful drops in choppy seas, yet are close enough to the water to hear it racing by.

Four hydrofoils (like those used in America’s Cup racing) elevate the yacht as if on wings and do this surprisingly smoothly, with a comfortable takeoff and landing, and do so without the rolling and slamming of other yachts this size.

New with the 2020 model is joystick controls—it looks like the driver/captain is just hanging out! From the traditional wheel-and-throttle helm console, activate the joystick. It’s located forward by the foredeck seats and controls the speed and direction of the yacht. Like other joysticks, pushing forward or pulling back powers up or dials back the speed of the Foiler from a standstill up to 40 knots. Tilting to either side mandates direction. Enata developed this capability over the last year, and, once in the groove, it ultimately feels like an extension of your body. 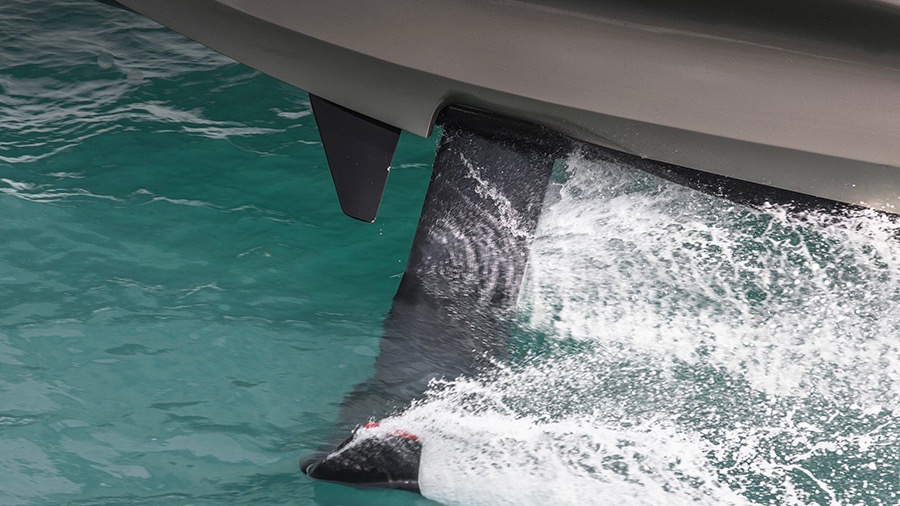 Using four hydrofoils, like wings in the water, the Foiler is a flying yacht.
Photo: Guillaume Plisson

Thanks to the new, industrial-grade, super-quiet hybrid propulsion system, you sort of have the yacht whisperer experience going on. Can you imagine the sensation of the hybrid-quiet (golf-cart-like) yacht coasting along the surface of the water with minimal vibration and just the sound of the water going by? It’s like sailing! 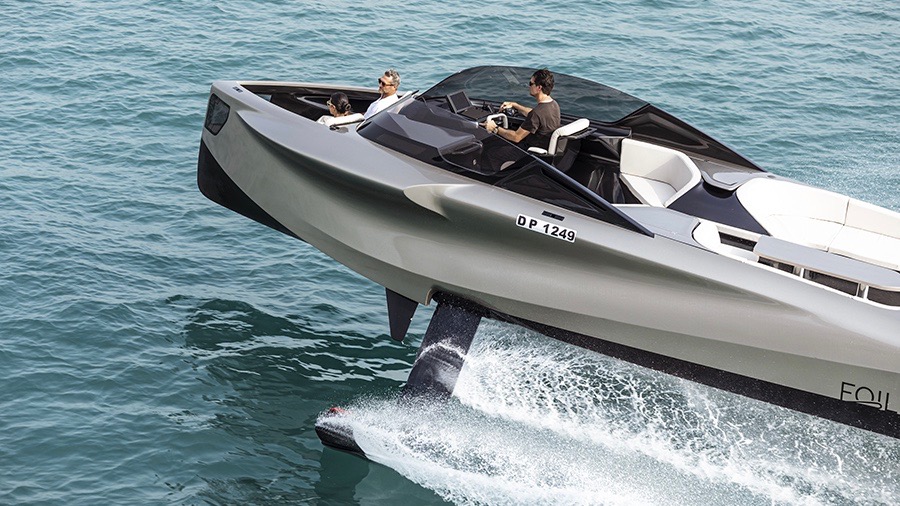 Cruise on top of the waves.
Photo: Guillaume Plisson

This fully customisable carbon-fibre yacht is powered by a pair of V-8 marine diesel engines that provide a combined power of 551kW and a top speed of 40 knots. Enata has extensively researched how to minimize the drag of the Foiler’s engines, producing a speedy and efficient yacht. 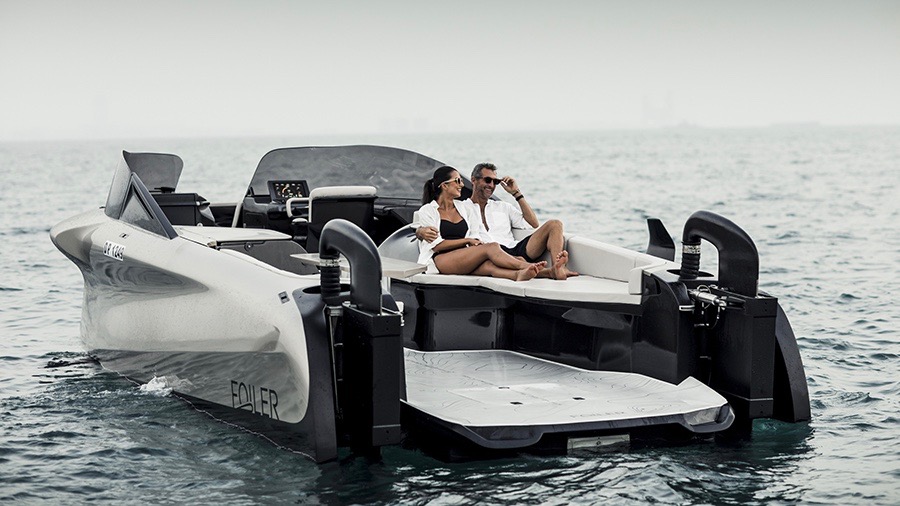 Retract the foils to use as a standard yacht.
Photo: Guillaume Plisson

If you’re not feeling the hydrofoil action, you can retract them and cruise like a regular non-foil yacht. Besides trying to fit in with the other yachts in the marina, this allows the owner to sail in shallow waters and dock at either a pontoon or a superyacht, like a tender. Not coincidentally, the Foiler can be used as a tender or day boat and stowed in a superyacht tender garage. 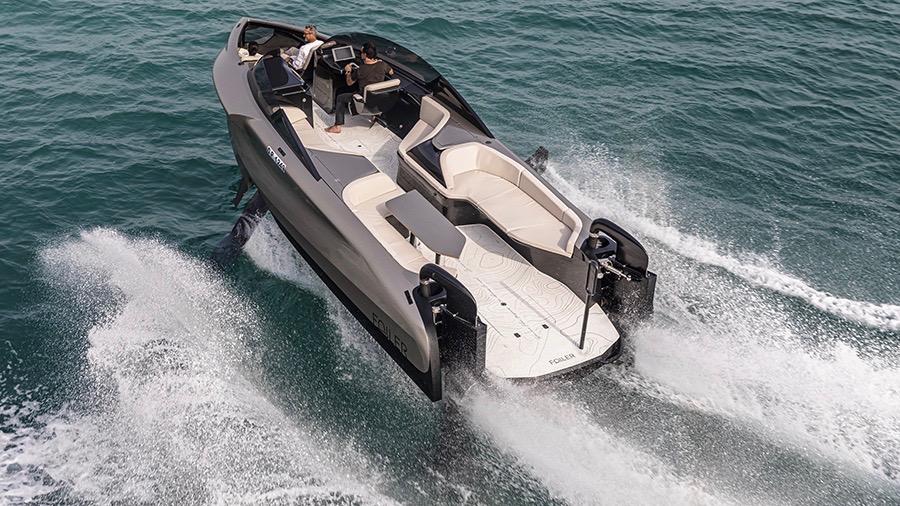 The Foiler has a top speed of 40 knots and cruises between 18 and 35 knots.
Photo: Guillaume Plisson

If you’re dying to check this yacht out, it will be displayed at the Abu Dhabi International Boat Show in October.