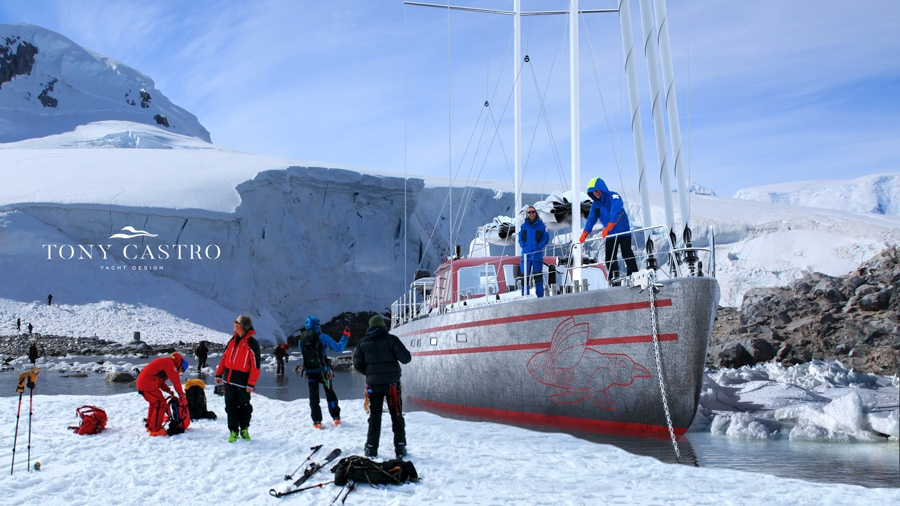 This 23-Metre Sailing Yacht Was Built To Explore The Antarctic

The Pelagic 77, created for a seasoned adventurer, will explore the remote Antarctic and arctic regions.

A new-ice crushing 23-metre sailing yacht is being built to explore Arctic and Antarctic waters by an owner who has sailed there before.

“There has been increased interest in expedition cruising over that last few years, with a number of yachts venturing into the ice,” says Peter Wilson, a co-founder of MCM, a Rhode Island-based construction management company that contributed to the development of the Pelagic 77, a new sailing yacht being built to explore the world’s most remote waters.

The circumnavigating sailing vessel is a collaboration between noted designer Tony Castro and Skip Novak, who worked together to build Novak’s Pelagic Australis. Novak has sailed that boat around the world since 2003, including multiple expeditions to both the Arctic and Antarctic regions.

The expedition sailing yacht’s reinforced aluminium hull was designed for sailing off the grid, while the vessel itself has plenty of redundancies built-in for self-sufficiency over long periods of time. Tony Castro Yacht Design

“One needs to carefully consider the ability to be self-sufficient in the harsh, dare I say inhospitable, environments that one encounters in the high latitudes,” Wilson told Robb Report. “A yacht needs to be robust, with reliable technical systems and built-in redundancies.”

KM Yachtbuilders in the Netherlands, an aluminium specialist, is handling the specialized construction to make the 77 hardy and autonomous enough to venture off the grid. “Many of the features of this yacht came from experiences Skip had during his previous high-latitude expeditions,” says Wilson. “These features will doubtless be adopted for similar projects going forward.”

The six-stateroom yacht was designed with features gleaned from the owner’s previous expeditions to the arctic and Antarctic regions. Tony Castro Yacht Design

They include a fixed keel with an aluminium centreboard, twin engines with protected propellers, and a workshop to handle on-site repairs. The sail-plan is designed to handle high winds and rough seas, with two equal-sized mainsails and an aft sail that fits on the forward mast to provide redundancy. Two RIBs provide expedition and lifesaving functions and the satellite-navigation antenna is mounted astern, so it will be safe if something happens to the mast.

Below decks, the Pelagic 77 sleeps 12 in six cabins. A diesel stove in the aft salon provides heat for that space while also feeding radiators in the staterooms. Form has certainly followed function on this yacht. But with her plumb stern and spiffy maroon highlights, the 23-metre vessel does more than simply get the job done. She will look good doing it.

Wilson thinks yachts like the Pelagic 77 are the tip of a new iceberg in smaller expedition sailing yachts. “We don’t see this trend abating as yachtsmen look to spread their wings beyond the traditional cruising areas of the Mediterranean and Caribbean,” he says. “Based on the current global situation, the enthusiasm for that kind of cruising may actually accelerate.”