When Steve Heese and his financial partner Stephen Julius purchased the assets of Chris-Craft in 2000, they were buying the world’s most historic boat name. But the company itself was in tatters, victim of absentee owners who had turned the brand into a me-too builder that was more about commodity than standout product.

“I grew up boating and was looking for a new adventure in my career,” says Heese. “I was lucky to find an opportunity where my passion for boating aligned with my investment plans.” After the two Steves acquired Chris-Craft, they whittled the model lineup back to four models and focused on giving it a high-end, retro look, with a higher price point and smaller dealer base. 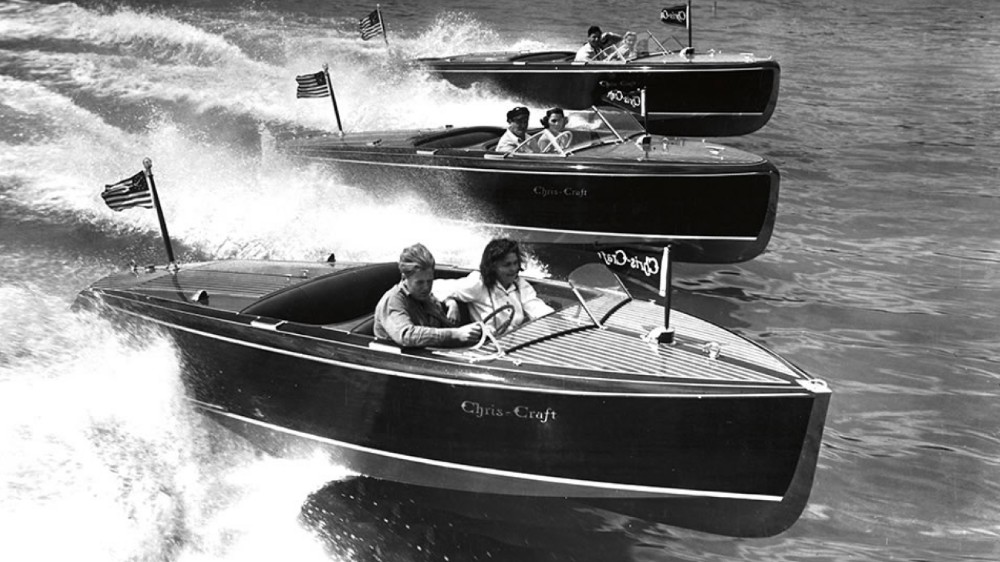 Through the 1980s, Chris-Craft was the world’s best-selling boat. By 2000, it was bankrupt. Courtesy Chris-Craft

Chris-Craft went from a commodity to a luxury product that appealed to a smaller, more affluent customer base. Heese says it took three years before the company made a profit, and despite many bumps that corresponded with general economic conditions, it is now building 17 models with record production numbers from its Sarasota, Fla., facility. Heese, who sold the company with Julius to Winnebago in 2018, has remained on as its president.

“So many people work in boating because it eliminates the line between what they love and what they do,” says Heese.

The yachting industry has a somewhat checkered history of owners buying the boatbuilder they love. With it comes all the uncertainties and idiosyncrasies of boatbuilding. Some succeed, many fail. But the common thread among the successful owners is a vision for reinventing the brand without jettisoning its past.

Twenty-two years after its bankruptcy, Chris-Craft has found its place among high-end day boats. Courtesy Chris-Craft

Heese says the boating world is full of names that all started with passionate owners. “I think you’d have to be a boater to own one of these companies,” he says. “You wouldn’t understand the needs of the customers and what they really want from their boats.”

Today’s list of boaters/yard owners includes Marc Giorgetti, owner of the 33-metre sailing yacht CeFeA. Giorgetti became so involved in the design of his custom-built Solaris that he was invited to become business partner and CEO.  Hans Georg Näder, owner of Baltic Yachts, was so impressed with his 45-metre Baltic Pink Gin sailing yacht that he bought the company. Ali Sayakci, yacht owner and founder of Evadne Yachts, applies the experiences he gained aboard the trawler he owned in his 20s to the explorer boats his yard in Turkey builds today.

A number of famous builders also have new owners navigating them towards healthier chapters following recent financial failures. Richard Hadida, who acquired Oyster Yachts in 2018, says his yacht ownership experience is the biggest reason he chose to purchase the UK shipyard. 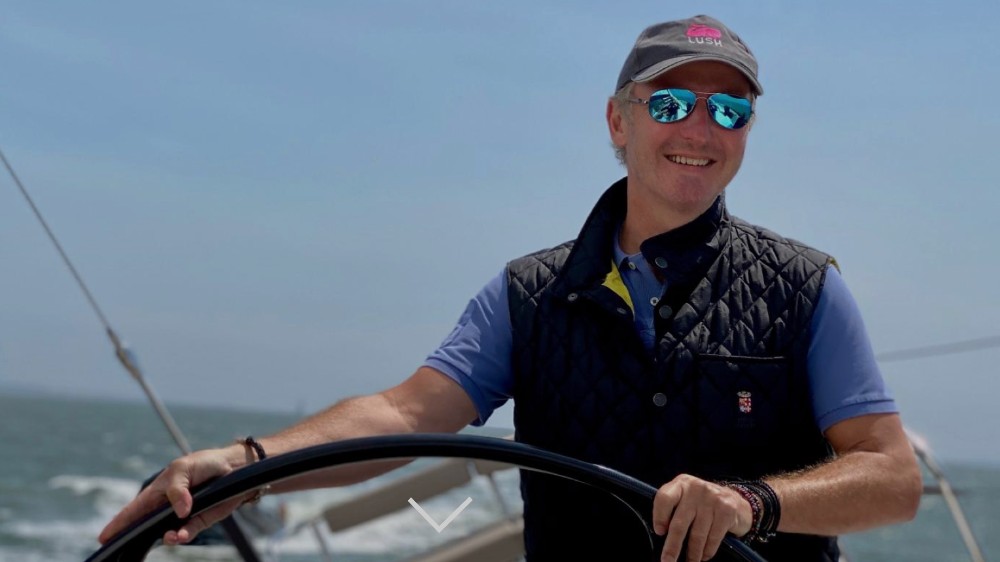 Richard Hadida had owned and sailed his Oyster Lush for years. When he heard the company was in trouble, he bought the yard and expanded its lineup. Courtesy Oyster Yachts

“I had never built a boat in my life,” Hadida told Robb Report. “But when I learned the company was in administration I thought that was a tragedy.”

A software entrepreneur, Hadida approached the yacht-building game as an end user, which is why he thinks he was the right person for the turnaround that has taken place at Oyster. He’d started boating young, preferring speedboats. But at 30, he did a night passage in Greece aboard a chartered sailboat. “I discovered during that magical night how incredible sailing is,” he says.

After years of different sailboats, he settled on an Oyster 885 named Lush, which he shared with the boat’s owner, former F1 boss Eddie Jordan. “It ticked every box and is the yacht I ended up buying,” says Hadida. “Eddie shared it with me, and now I share it with him.” 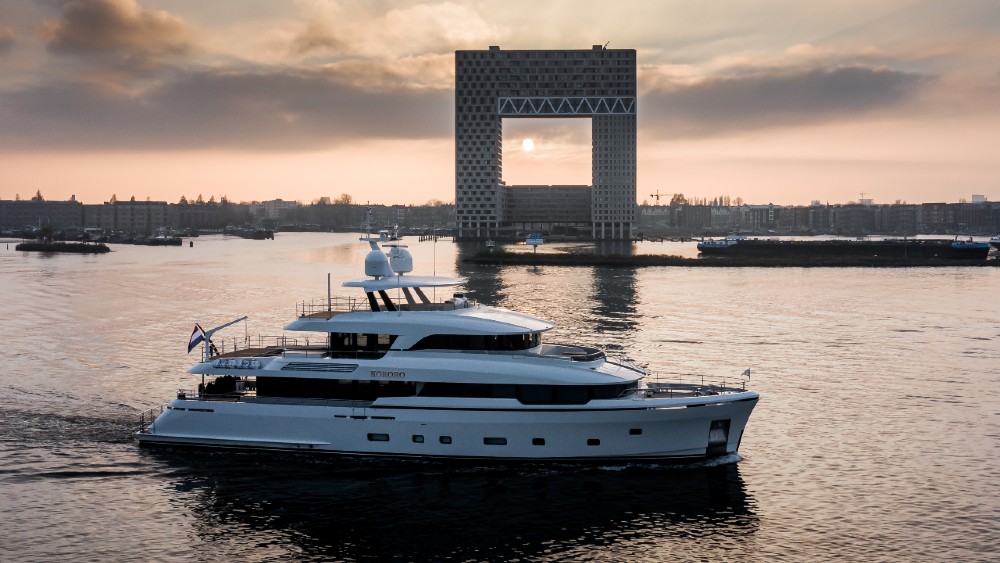 Hadida has focused on retaining Oyster’s quality while adding three new models to its portfolio—the 1225, 595 and 565—with a 495 in the pipeline.

Matthew and Louise Baxter, who acquired Dutch shipyard Moonen in 2019, have a similar story. The Australian couple first laid eyes on a 25-metre Moonen named Aurora in a harbour north of Sydney. When they discovered the builder was in liquidation, they moved from buying the yacht to buying the yard.

“That is what I do for a living—take underperforming assets and companies and turn them around,” Matthew told Robb Report. 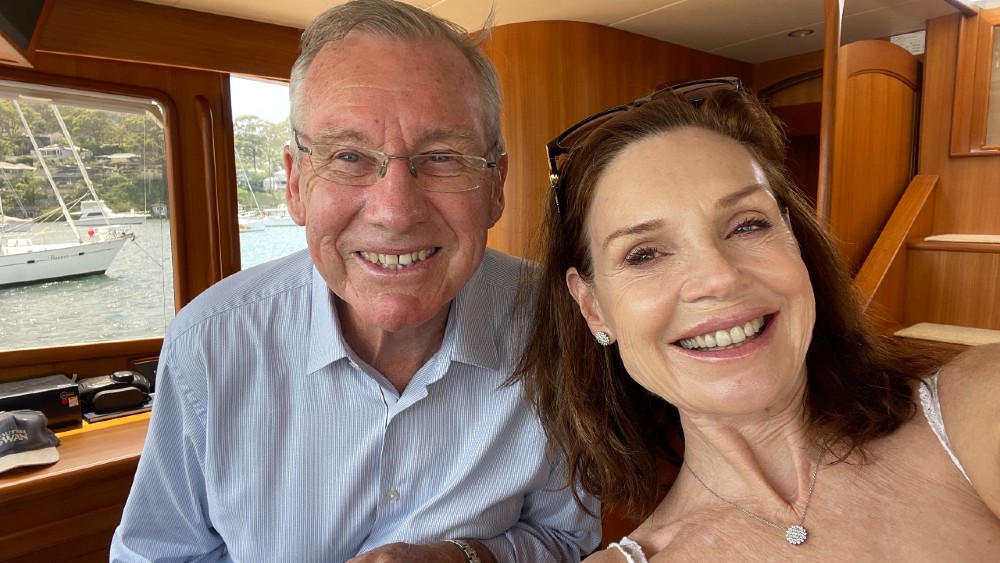 Matthew and Louise Baxter first saw a Moonen north of Sydney. A turnaround specialist, Matthew realised the brand’s potential and acquired the yard. After three years, a new generation of Moonens are being built and sold. Courtesy Moonen

“We’re a sailing family,” adds Louise. “We always look for quality in a boat. We’ve invested in new equipment at the yard because we can’t expect the workforce to build quality without the right tools.”

Among the globally known Dutch yards, Moonen was seen as a strong brand, but an underachiever. The last Moonen sold was in 2014. “They basically gave it away,” says Louise. In the past two years, Moonen has sold four boats and last December launched the 36-metre Botti, the third yacht in its semi-custom Martinique series.

The Baxters have yet to build a Moonen for themselves, but the experienced boaters spent 20 years sailing around the Pacific on a Swan 62. They sold the Swan when they bought the yard, but have kept their 50-year-old New Zealand-built wooden sailing boat named Barbarian. They have since bought a 18.9-metre Fleming for day tripping. “We’re combining Matthew’s expertise in the management of construction with our love of sailing,” says Louise. 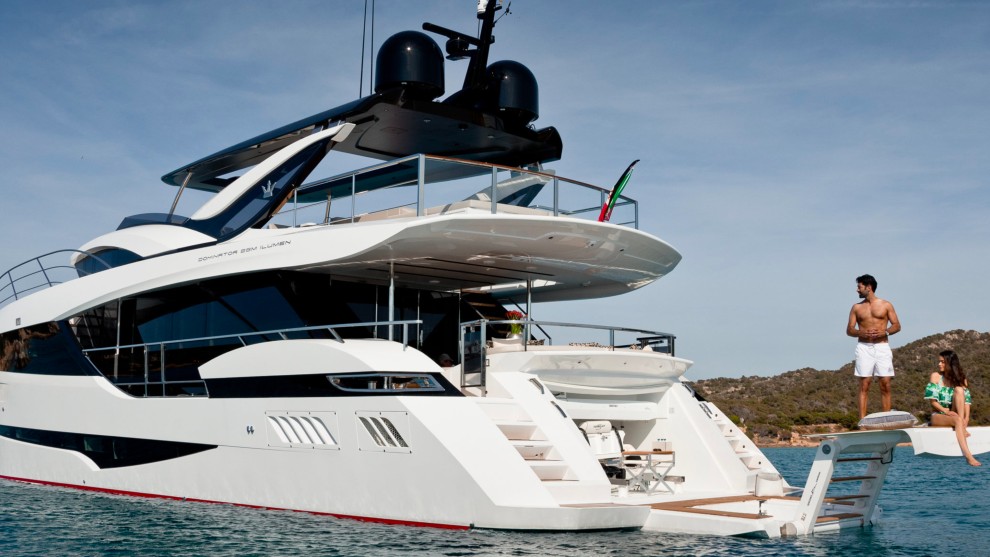 Dominator went from a regional Italian builder to a global name by moving to larger, cutting-edge designs. Above is the Ilumen 28 metre with its foldout swim platform. Courtesy Dominator Yachts

Austrian entrepreneur Wolfgang Pernsteiner bought the Italian yard Dominator in 2010, and quickly had his 20-something CPA daughter, Angela, take charge of the company. The family had owned other Italian brands in the past, but their favorite boat had always been a Dominator.

When they bought the troubled builder, it was a small, regional brand. The Pernsteiners saw how they could bring it global with new, innovative designs. Today, the Italian builder is working on yachts from 79 to  124 feet.

Angela Pernsteiner says that it all comes back to the original passion for boating. “In an industry as complex as yachting, you must be in love with boats if you want to see a change and bring new designs to the water,” she told Robb Report. “Every year we reach beyond what has previously been seen.” 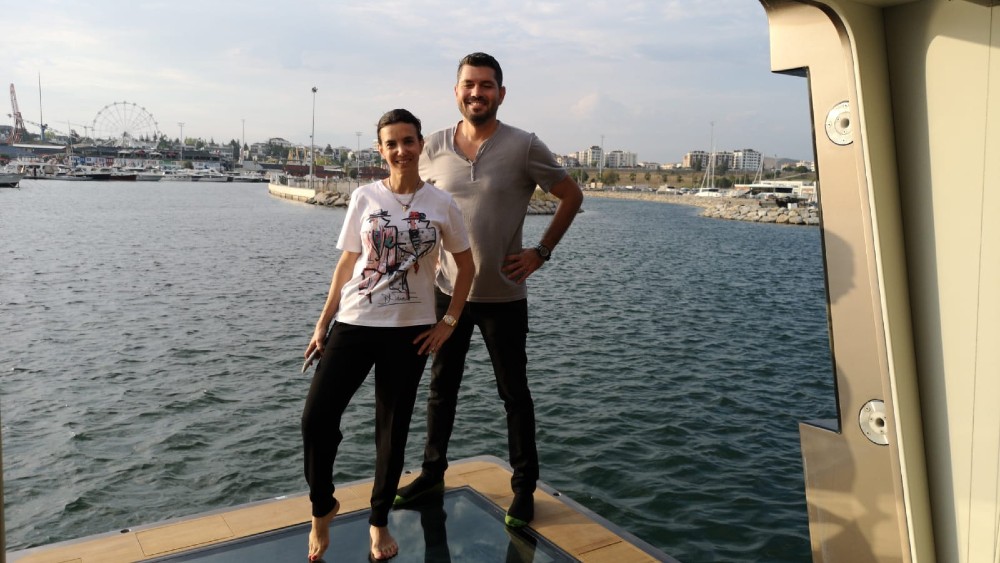 Ferhunde and Ali Sayakci, owners of Evadne Yachts, aboard the fold-down swim platform of one of their explorer yachts. Ali came up with the idea of a modern-day explorer line after owning a rough-and-tumble trawler in his 20s. Courtesy Eviadne Yachts

The latest, and arguably most ambitious, boater-buys-builder story is Cigarette Racing in Miami, Fla. Cigarette has been an icon for performance boats since 1969, when founder Don Aronow launched the brand.

The company has gone through different iterations, never abandoning its go-fast roots while also branching into high-performance fishing boats. It’s one of the few companies in this story that wasn’t acquired in a distressed state.

The new owners, John H. Ruiz, a Miami attorney, and Ophir Sternberg, owner of private investment firm Lionheart Capital, have even larger plans, including a new Cigarette-branded jet ski and a 45-metre superyacht that will be built in Europe. The owners bought the company and its Opa-Locka facility last August. 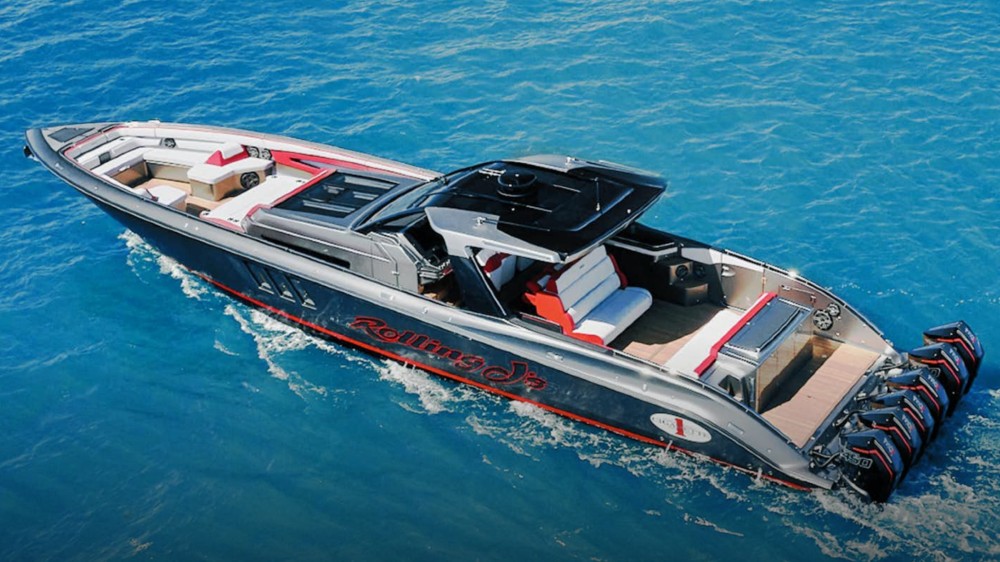 “Since the early 2000s, I have owned five different Cigarettes,” Ruiz told Robb Report. “That was one reason I was interested. But from an economic point of view, we felt like this opportunity was the right time.”

Sternberg is not a boater, but sees the potential of growth. “We concluded that Cigarette is best in class, with a lot of legacy around it,” he says. “It also has a great international following, and we tend to keep it that way.”

The two partners, in fact, had both considered purchasing Cigarette separately, and after discovering that, they came together to move the brand forward. The partners see it as a “long-term investment,” according to Sternberg, with the goal of acquiring other boat brands. 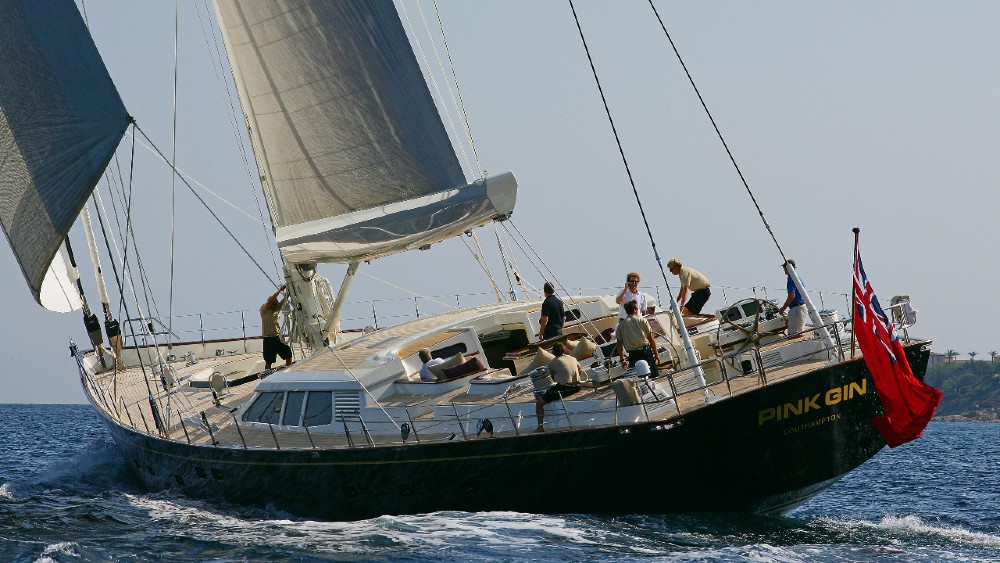 One reason Ruiz bought Cigarette was because of its oceangoing ride. For years, he has ridden in Cigarettes from Miami to the Florida Keys and the Bahamas. To investigate one personal-injury case, he crossed the Gulf Stream 19 times in his 38 Top Gun. Before buying the company, he’d already owned four Cigarettes, including the company’s flagship 59 Tirranna.

“When you’re out in the open ocean, a Cigarette performs like no other boat,” Ruiz said. “They’re very rugged—it has an incredible ride that ploughs through the ocean. I believe it offers the safest method of transportation. I feel confident in bringing my family on board.”

Which might be one of the best reasons why anyone would ever buy a boat brand.