The Wally WHY200 Is A Rule-Breaking Yacht

Thanks to its wide beam and high profile, it has the interior space of a 50-metre superyacht.

It’s pretty clear that someone who names their yacht company after a 1960’s cartoon is going to have an unusual view of design. Luca Bassani, who called the 1989 boat he built for himself Wallygator (after the Hanna Barbera cartoon), has since turned the Wally brand into yachting’s favourite cult. The angular hulls and minimalist topsides have been recognizable worldwide for more than 20 years. Bassani is the only designer whose unique looks extends from 30-metre-plus sailing yachts to 9-metre powerboats—and he introduced them years before many other builders started copying his designs.

The Italian designer has launched a new trend with the new WHY200—200 standing for 200 gross tons, which is not weight, but the internal volume of the yacht. It equals 20,000 cubic feet.

The WHY stands for Wally Hybrid Yacht, but it doesn’t mean electric-diesel propulsion. “It’s a hybrid between a planing motoryacht and displacement boat,” Bassani told Robb Report at the Monaco Yacht Show. “We were constrained by length but not by width, so we created an extreme, wide-body yacht. We wanted to offer much more than competitors by not following the rules of the game.” 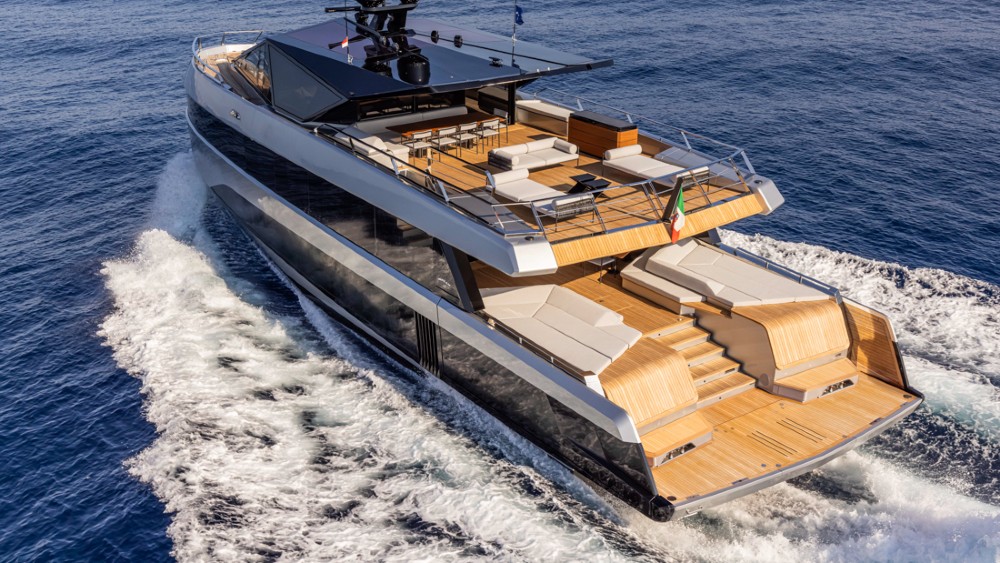 The 7.6-metre beam is put to good use in the stern and flybridge of the new Wally. Courtesy Wally Yachts

Actually, the rules of the game are what prompted the design. European maritime regulations state that any hull length of 24 metres and below are boats. Over that, they are classified as ships, with different rules and significantly higher operating costs. The trend now is to package as much interior space as possible into smaller hull lengths, and different European brands, including Princess, Ferretti Yachts, Azimut and Benetti, have done that with relative degrees of success.

But the WHY200 is another animal. It has an overall length of 27-metres, but its hull length at the waterline is 24-metres, so it works under the 24-meter rule. But then the real measurements begin. “The beam of the main salon is 7.6-metres, the same size as a 48.7-metre superyacht,” says Stefano de Vivo, Wally’s managing director, who admits that the unusual profile will “get a positive or negative ‘wow.’” But when they come inside, he adds, “they’ll see why it’s designed like that.”

Looking at the first images, I was firmly in the negative-wow camp. The vessel looked like a tall, somewhat bloated wedge—a midlife-crisis version of the svelte, strait-edged Wallys of earlier days. As a longtime fan of the brand, it seemed like Wally had gone soft. 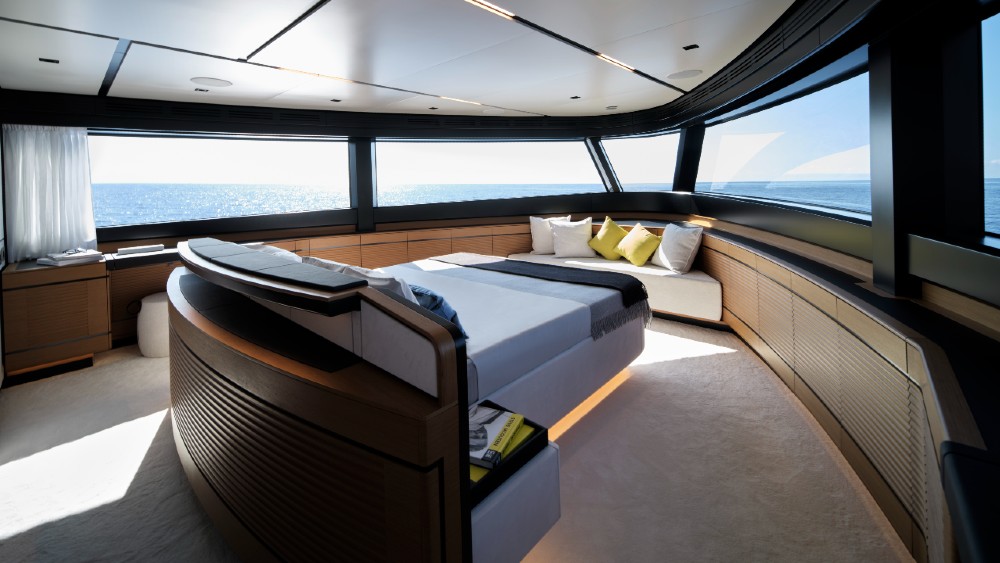 The one-of-a-kind main salon in the bow has a 270-degree view of the water. Courtesy Wally Yachts

But as soon as I stepped aboard, I couldn’t help muttering a positive wow under my breath. The boat is wide, with a beam of 24-metres, and the stern uses every bit of that, with wide open space and stunning teak-work. The side panels open out to make the boat feel even wider, giving it more volume along the exterior. There’s no other word but commanding—while still being elegant and simple—for that stern. It’s a very hard impression to pull off.

Anyone can design a lot of space into a yacht, but it has to be able to run safely in seas. Bassani has been obsessed with seaworthiness in both his sailing and power yachts, so it was clear he wouldn’t just settle for a big box on the water. Wally worked with naval architect Laurent Giles to create a running surface that offers strong fuel efficiency and range in displacement mode, but can plane to a speed of 21 knots, or 24.1 mph, with its four Volvo Penta IPS engines.

“The bow doesn’t lift out of the water more than a degree when it goes on plane,” says Bassani. “And you don’t feel the ride like other motoryachts. We had the boat in six-foot seas and it was very steady—no pitching or pounding.” 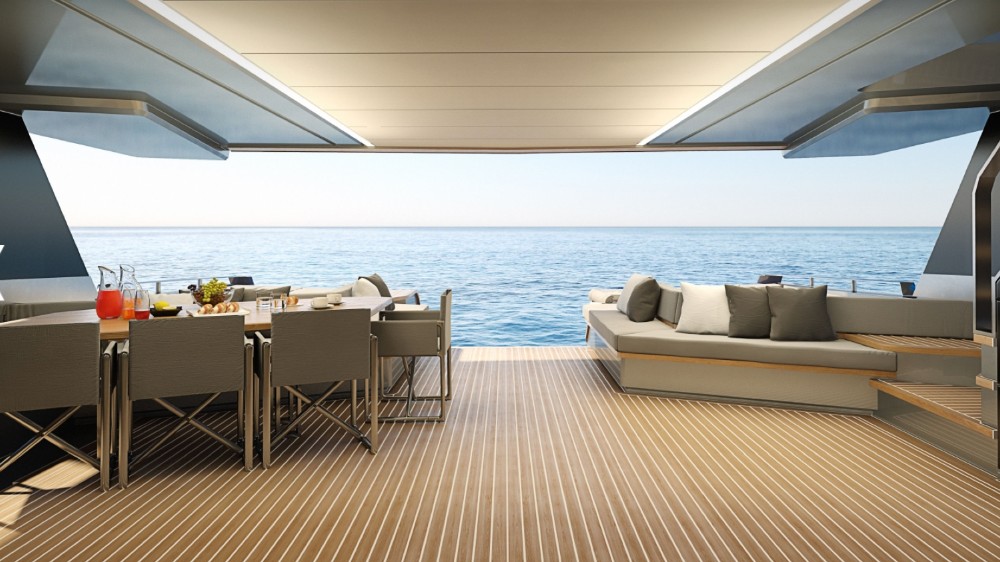 The yacht’s openness is emphasized outside, but also throughout the interior. Courtesy Wally Yachts

Beyond the hull, the big differentiator among its competitors is the WHY200’s interior, with a 900-square-foot main suite in the bow that has 270 degrees of tall windows around the island bed, and sits about 14 feet off the water for exceptional, private views at anchor or running. The design is another first.

The main salon is below-decks, down a wide glassed-in, carbon-fiber stairway that’s an architectural feature, but also lends structural stability to the yacht’s center section. The design also separates the two large spaces in the salon. Items like a “show” kitchen, just near the yacht’s rear entrance,  four staterooms on the lower deck, and the distinctive minimalist woodwork and black-lacquer trim provide a distinctive signature. There’s a sense of openness across the yacht, with no clutter.

The flybridge provides an inside-outside living area, with an edgy, angular carbon-fiber top covering about half of it. The bow comes to an extreme point, with minimal foredeck, rising about 15 feet over the water, making it a dry boat. 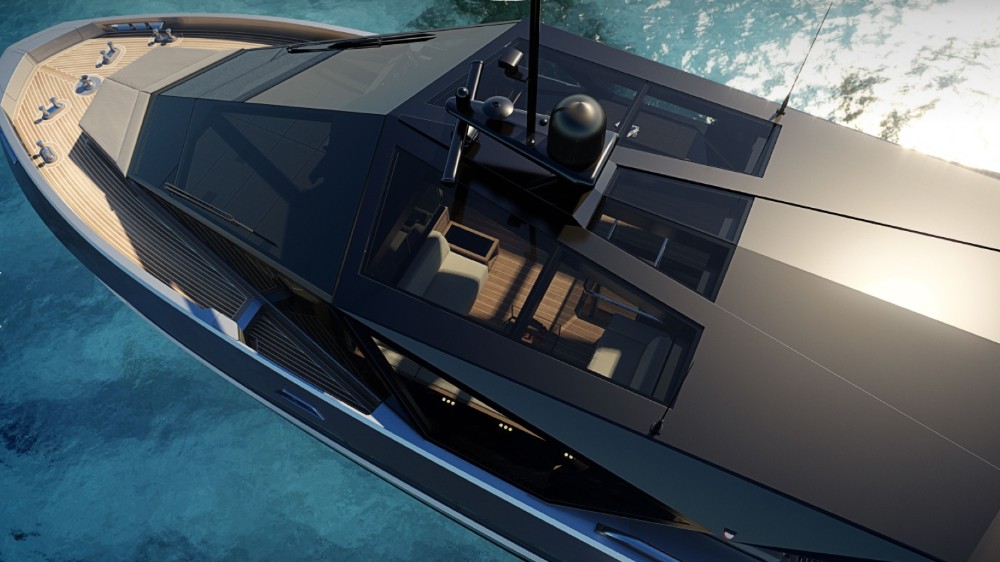 An angular, carbon-fiber hardtop has been a Wally signature for more than 20 years. Courtesy Wally Yachts

I asked Bassani about the unique look. “It’s the first of its kind, just like the Porsche Cayenne,” he says. “Nobody did a sporty SUV, but a few years later, they’re everywhere.”

He added: “You can’t really compare this boat to others of the same length—length is only one of three dimensions of any design. In the end, you have to compare by comfort.”

These days, where gross tonnage is king, comfort has become the key design feature for many builders. Wally says it will make a smaller version of the WHY200, but didn’t release details.