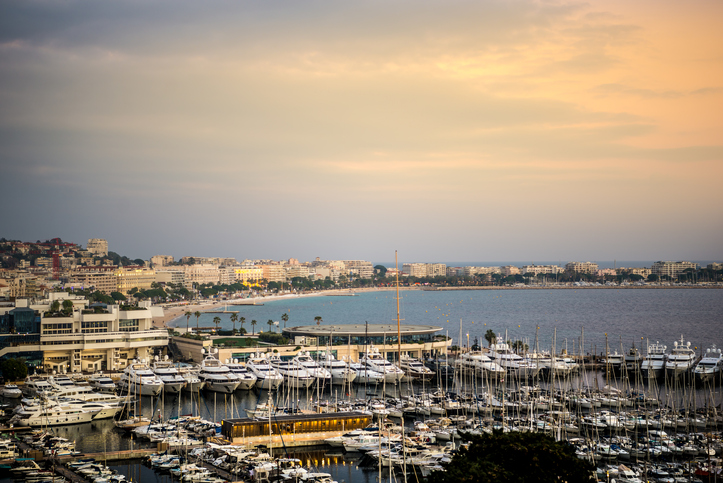 The kickoff of the boat show season, Cannes, promises an exceptional display after 2020’s cancellation.

The world’s largest boatbuilders use Cannes to strut their latest launches before the yachting world, and what a show it promises to be. Cancelled last year due to Covid, next week’s event from September 7-12 promises a banner display in one of the Med’s most beautiful ports, with multiple launches across all segments. The show is divided between the Vieux Port, with 450 motorboats and yachts up to 45-metres, to Porto Canto with 108 new launches in the Sailing Area and 50 brokerage yachts.

Cannes will also include a special area for electric boats, multihulls, and innovative designs as well as a sea-trial area. The Luxury Gallery is for owners who want to see the latest designs and equipment, while two special sections called The Jetée and Superyacht Extension are devoted to the show’s largest yachts. After last year’s shortage of major boat shows, including Monaco and Miami, Cannes promises a return to a new normal in the yachting world, populated by pent-up demand and many newcomers.

These 10 yachts are not only some of the largest at this year’s show, but also herald many innovations in design, usage of exterior and interior space, and range of styles. It’s going to be a good year for yachting.

The multi-award-winning Riva 76’ Perseo is hard to beat. But that’s exactly what the new Riva 76’ Perseo Super aims to do. Over 40sqm of glazed surfaces on the hull and superstructure characterise the yacht’s sleek profile, while the sun deck provides a second helm and much sought-after place to relax in privacy. Plus, it reflects the best of the Italian builder’s signature craftsmanship.

Azimut Yachts’ new flagship Grande Trideck elevates al fresco life to the next level. The all-new living area, named the Sea View Terrace, is an aft raised mezzanine deck for the ultimate sun-kissed experience. It is one of four onboard terraces which, when viewed from the stern, give the visual effect of cascading levels flowing from the sundeck down to the glistening sea. Very grande indeed.

Wally Yachts has gone back to the future with its daring new WHY200. It’s described as a “cool new space ship” by the builder of some of yachting’s most adventurous designs. This latest Wally is remarkable since it packs 200 gross tons of interior volume into a 27-metres hull. There are plenty of features to love, including the open rear sections. But the real wow factor is the gargantuan 37sqm owner’s suite, located in the bow. With wraparound windows and 200-degree views, Wally says it creates the sensation of floating above the water—a concept that Marty McFly would definitely embrace.

Benetti’s Motopanfilo 37M is an elegant take on a retro classic. Inspired by its Navetta from the ’60s, which entertained a range of guests from Prince Rainier of Monaco and rock star David Bowie, the new 37-metre version is a thoroughly modern makeover, with a retro-but-contemporary exterior by Francesco Struglia and beautiful, imaginative interior design by Lazzarini Pickering Architetti.

For owners who like the idea of a new-build yacht with proven engineering but want to customize the finish, Bering’s rugged B70 might be the answer. Sporting an axe-bow hull shape that “slices through waves,” according to the company, the seaworthy vessel lets owners personalize fabrics, finishes, furniture and even cabin configurations to create their very own dream boats.

Sanlorenzo’s unique design innovation is back, this time with the aptly named SL 120 Asymmetric. The name comes from both the internal and external layouts: There is only one passage on the 37-metre vessel’s main deck on the portside, while inside, the dining room occupies one side of the salon, and the living area is on the other. The open-plan space and floor-to-ceiling windows that run the length of the salon give a luxurious residential feel. This non-traditional choice works well, increasing not only the interior volume, but the owners’ connection with the sea.

The “Extra” in Palumbo’s Extra X86 stands for space. Space in the salon, space on the aft deck and space in the 50sqm beach club. The owners of Haze set out to create a penthouse on the water, and it’s fair to say the glass-encased, three-level cockpit achieves it. Oh, and there’s a 25sqm “roof terrace” flybridge to match. A beautiful, unusual design.

An explorer vessel with attitude, Aurelia, the new Flexplorer from Cantiere delle Marche, features an on-deck, 3.5-ton crane capable of safely launching all manner of water toys, including the boat’s 8.5-metre Jokerboat Clubman tender. At anchor, the yacht has collapsible bulwarks that fold down on both sides to create an epic beach club area of more than 110sqm.

When an owner asked for “speed and a dynamic character,” Baglietto answered with the 40-metre Panam. The boat’s lightweight aluminium hull, three MTU V16 2000 engines, and 3 KaMeWa waterjets push it to a highly impressive 31 knots. Pencilled by Francesco Paszkowski Design, the steel-coloured exterior cuts a sleek, wedge-shaped profile on the water, with drop-down balconies for waterside lounging.

Inspired by aeronautical and automotive design—glossy, black grilles in the aft bulwarks—we singled out the Otam 70HT for two owner-requested custom features. These include the up-and-down electric glass window that separates the interior lounge from the exterior cockpit, and the removal of a tender garage in favour of a larger beach club. That helps with performance, which is Otam’s historic signature. The Italian builder says, with the right engines, the 70HT can blast past 50 knots–lightning-fast for a boat this size.