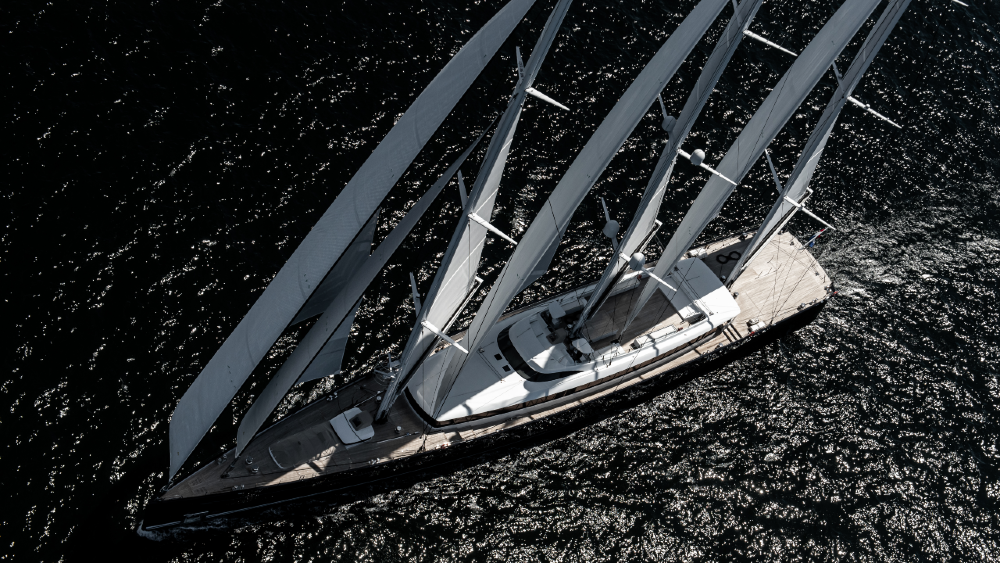 Despite a trying year for the rest of us, the world’s best shipyards completed a group of fresh, boundary-breaking superyachts. They range from the long, graceful and eco-friendly Lana to the go-anywhere explorer yacht La Datcha, to the highly technical sailing vessel Sea Eagle II. Even with 2020’s turbulence, the designers and builders continued to push ahead with larger hulls, smarter interiors and improved propulsion. It’s a good start to the next decade of yacht-building. 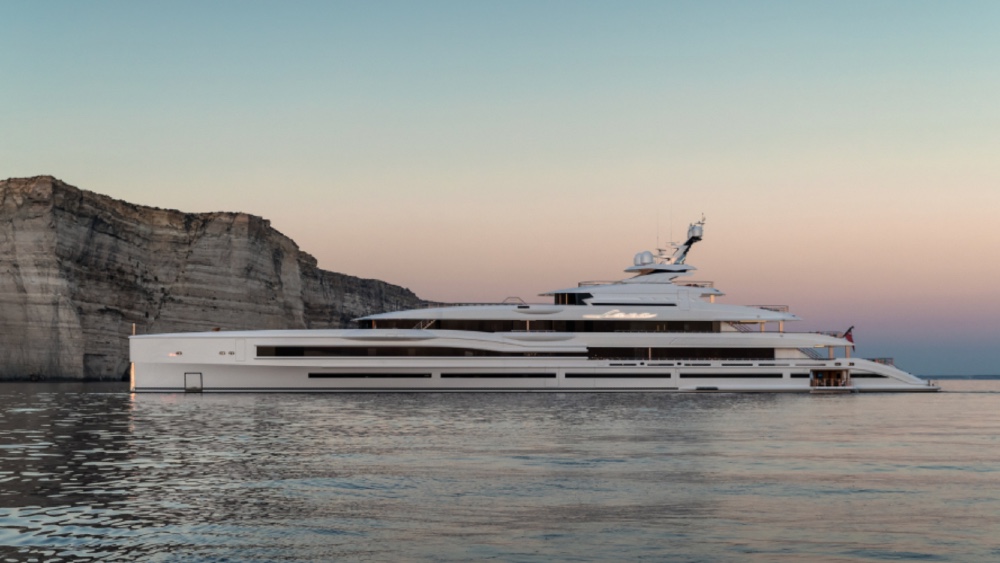 This 107-metre vessel not only has one of the coolest beach clubs on the water but hybrid propulsion that dramatically reduces emissions. Courtesy Benetti Yachts

This 107-metre hybrid-powered superyacht is a breakthrough design in multiple ways. Beyond her carbon-reducing battery-diesel powerplants, Lana’s plumb bow, low-riding five-decks and open stern give her an immediately recognizable look anywhere in the world. The one-of-a-kind exterior continues on the sundeck, which has dozens of seats ringing an 8-metre pool and an eight-speaker audio system to deliver front-row sounds. The foredeck is empty, so it can be used for socialising, sports like golf or basketball.

The 120-sqm beach club includes foldout side decks, teak flooring, plush sofas, 65-inch televisions and, best of all, a full gym and spa, with a mosaic-walled hammam, massage room and even full-spectrum chromatic lighting for therapy. Night life is a specialty aboard the Benetti, with the 70-sqm cinema room that delivers a surround-sound experience, thanks to a Faber Olympica sound system.

On the upper deck is a sky lounge measuring 80sqm, with games tables and a baby grand piano. The owner’s suite is arguably the most impressive in its class. Measuring more than 1000 square feet, it has foldout terraces, his-and-her walk-in closets, and a full-beam en-suite, with a shower and bathtub. Benetti built custom décor like a breakfast table with a crystal base and craquelure surface, and mother-of-pearl bedside tables. 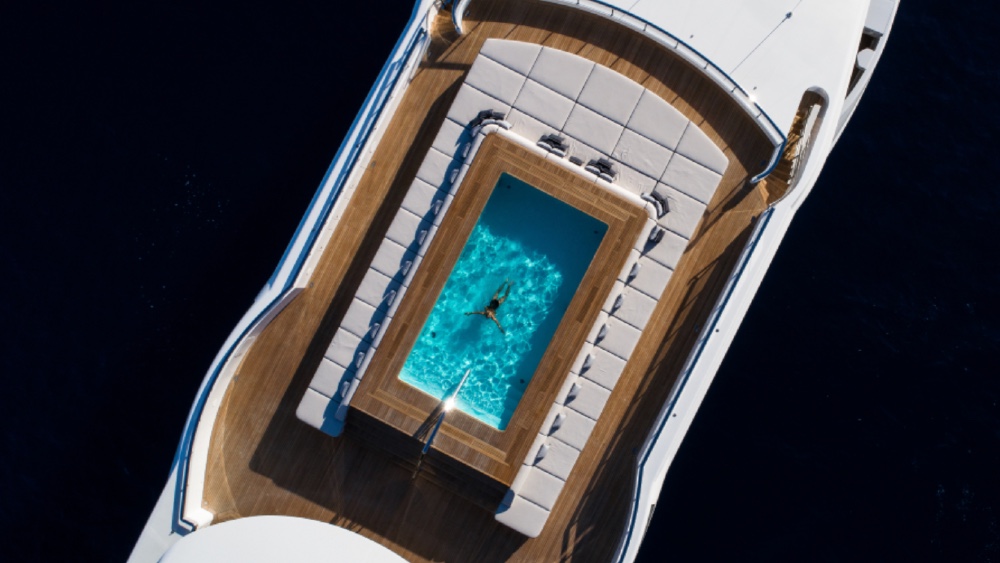 The yacht is available for charter for about $3 million. 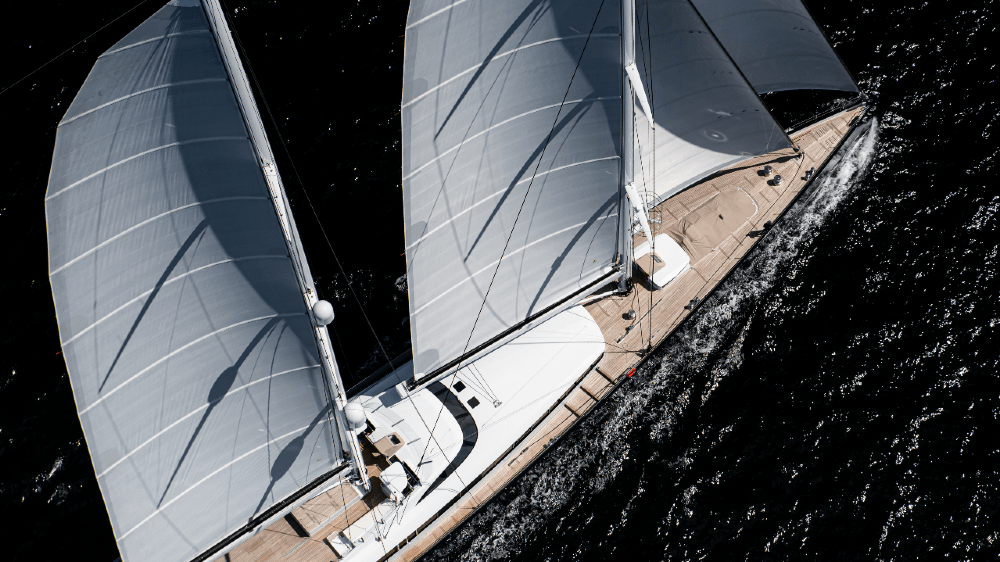 This magnificent sailing vessel—the world’s largest aluminium sailing yacht—was built by Royal Huisman for a repeat client. The 81-metre yacht has 60-metre-high carbon masts and a sweeping 3347-sqm sail plan. The yacht is a “Panamax schooner,” which means that it’s designed to cross the Panama Canal, with the masts just clearing the Bridge of the Americas on the canal’s Pacific entrance.

Mark Whitley’s interior design mingles sustainable, alpi-walnut panels and natural oak floors for a calming effect, while the owner’s collection of modern art on the walls adds vivid colour to the woodwork. Whitley was cognizant that the yacht would be under sail for much of its time on the ocean, so he designed handrails across the cabin for times when the boat heeled. But to keep the luxurious effect, he wrapped the handrails in leather. Sea Eagle II, which the owner also plans to use for business meetings, has a 16-seat dining table and plenty of seating around the salon.

Beyond the salon, there are accommodations for 11 guest and 14 crew. Sailing a visual masterpiece like this involved integrating many functions like furling booms, automatic deck winches, mainsail furling systems and load-sensing the rigging to make sailing with a shorthanded crew possible. The yacht also has a first-of-its-kind carbon-fibre rudder that includes load sensors, adding to her technical prowess. 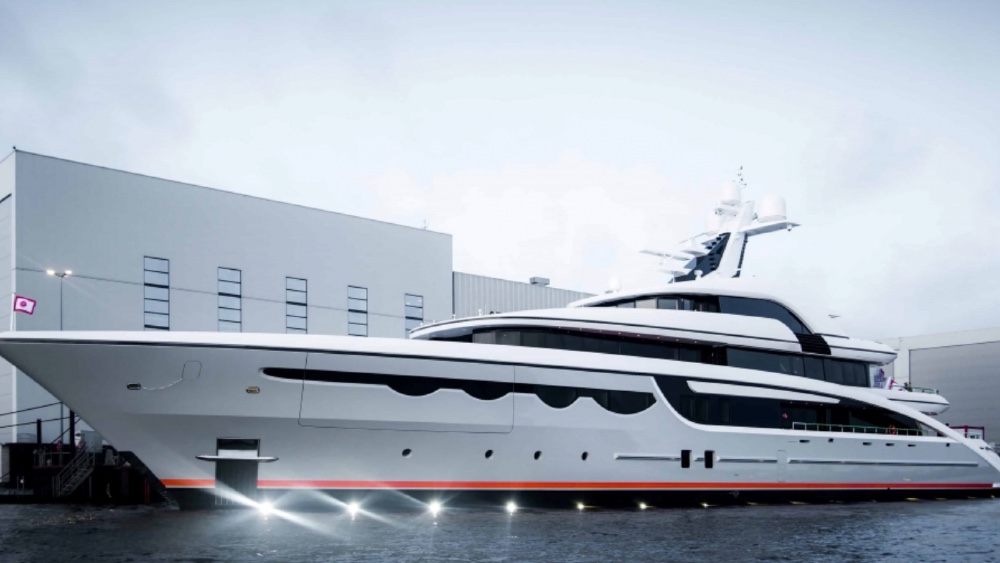 Soaring has graceful lines and soft curves on the superstructure, with an owner’s suite on the upper deck that affords privacy and exceptional views. Courtesy Abeking & Rasmussen

The 68-metre Soaring from German shipyard Abeking & Rasmussen has an unusual layout mandated by the owner. The master suite is located aft on the upper deck, giving way to a private deck through large sliding doors, and also a library that is positioned forward. The remaining five staterooms are on the main deck—an unusual arrangement since typically most guest staterooms are on the lower deck. But this arrangement also provides exceptional natural light and views for everyone on board. The yacht, which is available for chartering, also has a gym with Technogym equipment, sauna and steam room, swimming pool and a hot tub, and an expansive beach club.

The stairstep look of the profile allows for sweeping outdoor experiences on each deck, all the way down from the sundeck to the transom beach club. The water was a big focus for the owner, who mandated the yacht have two large tenders—a 9-metre Compass limousine and 7.6-metre Pascoe—as well as Jet Skis, Seabobs, kayaks and paddleboards. Like the exterior, the interior has a minimalist feel with a premium on open space, floor-to-ceiling windows, large lounges, high ceilings and customised lighting (including a futuristic-looking chandelier over the dining table.) Seventeen crew members are on hand to tend to assist both the owner’s party and charter guests, when the yacht is under charter. 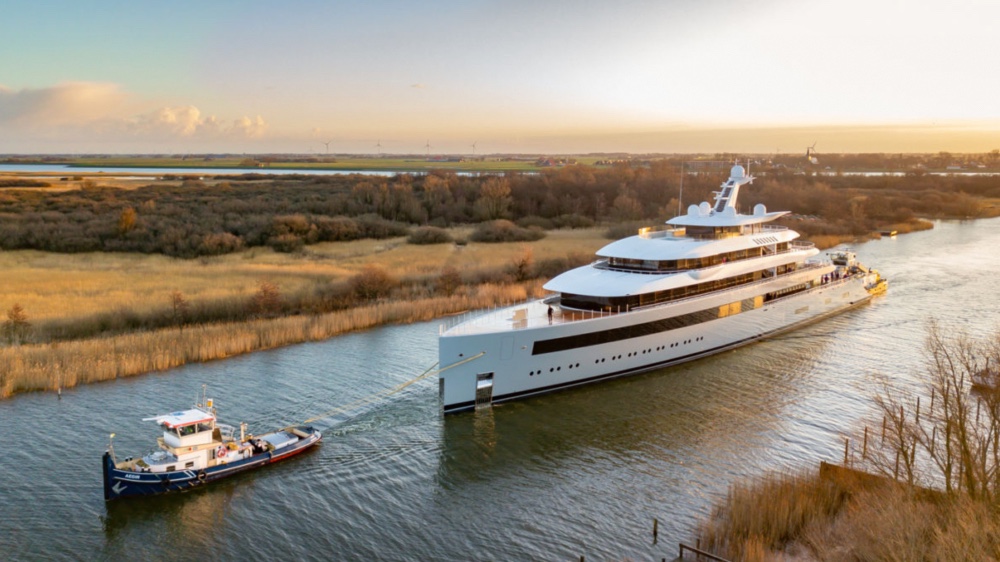 The 100-metre Moonrise, unveiled last February, is the largest build to date by the storied Feadship yard. The exterior by Studio De Voogt is long and svelte, punctuated by vertical bow and five decks. Moonrise will have eight staterooms for 16 guests as well as unusually high-end quarters for 32 crew, thanks to Rémi Tessier Design, which created the interior.

This stunner is designed to reach a top end of 19.6 knots, with a comfortable, efficient cruise speed of 16 knots. Despite her expansive interior volume and length, Feadship worked hard to lower vibration and keep Moonrise as quiet as possible. The yacht was spotted last summer in Croatia on her shakedown cruise. 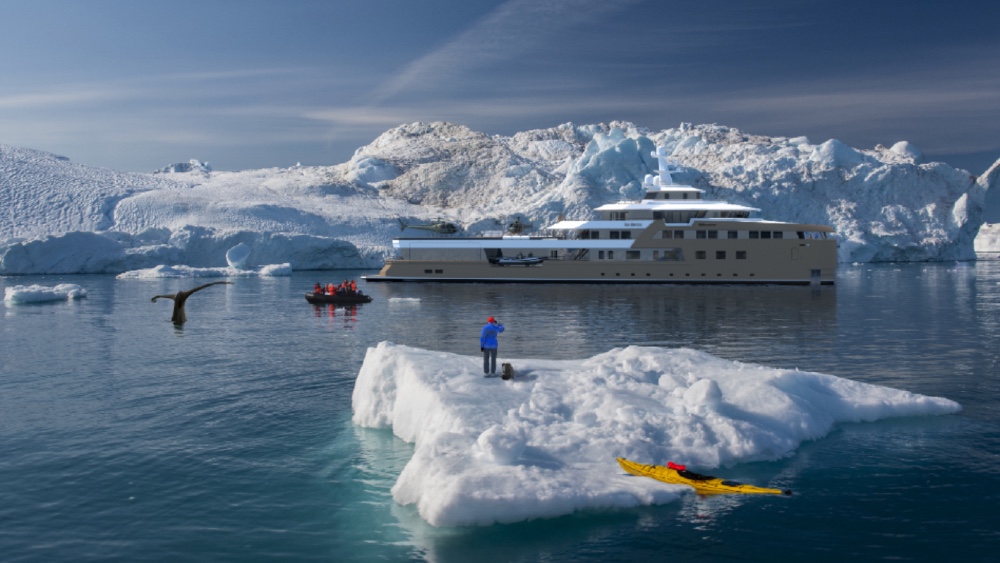 Built to travel to the world’s most distant cruising grounds, La Datcha was designed for extreme sports, with two helicopters, submersible, snowmobiles, and a sophisticated dive centre. Courtesy LaDatcha

La Datcha was designed for exploration, and not just a trip around the Caribbean. The six-deck SeaXplorer from Damen Yachting has an ice-breaker hull, staterooms for 12 guests (and accommodations for 16 crew), as well as a Turkish bath and sauna, massage studio, gym, jacuzzi and even a glass elevator to connect the floors.

The owner is into extreme sports like heli-skiing and underwater exploration, and his goal was to visit some of the world’s most remote regions for long periods. The Polar Code-compliant boat is capable of being autonomous at sea for up to 40 days.

La Datcha is also the first yacht to carry two commercially certified helicopters in separate garages that are used for heli-skiing. Designed to be chartered, La Datcha has an onboard hospital emergency room, with remote connection to a 24/7 doctor on call, and crew with medical training. 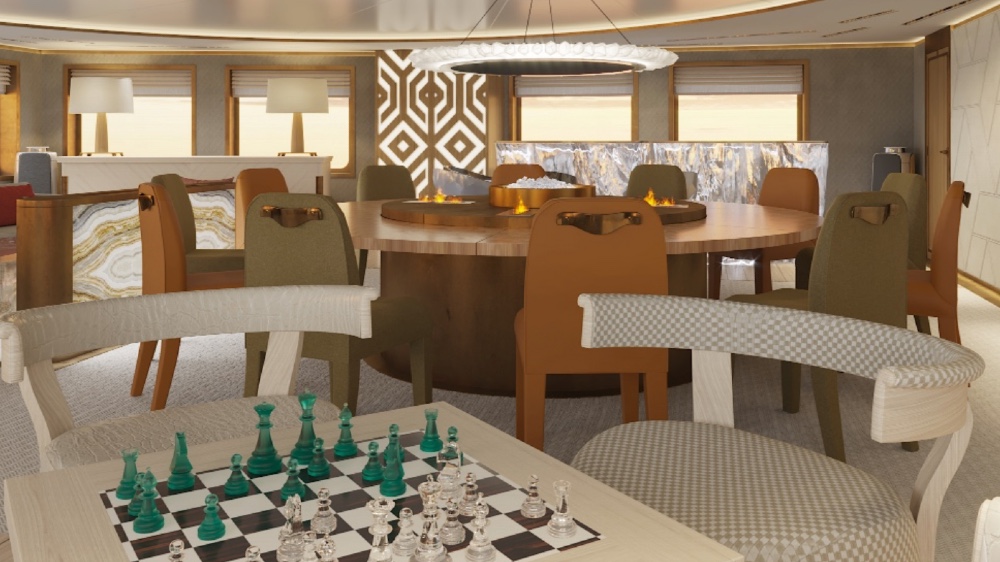 For water sports, she has a three-passenger submarine, four jet skis, and a sophisticated diving centre equipped with a decompression chamber and enough compressed air and Nitrox to allow all 12 guests to dive together for up to seven days. 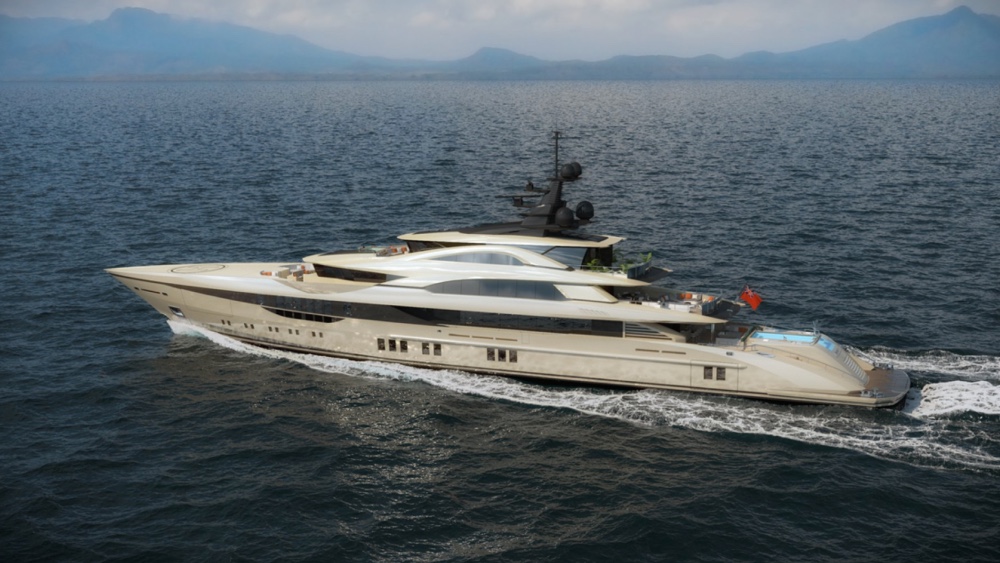 “We designed a very attractive yacht with a sleek and sexy profile while avoiding high-dosage design clichés,” says Emrecan Özgün, CEO of the Istanbul design firm, referring to the often-boxy shape of other high-volume motoryachts in its class. “The increase in living areas normally results in bulky designs.”

Interior designers H2 Yacht Design used Macassar ebony, eucalyptus and multiple marbles to create strong contrasts. “The yacht is contemporary in layout with generous salons and a huge spa and beach club aft,” says H2’s Jonny Horsfield. “The theme of the interior is based on a light but rich palette, while the design is definitely crisp and contemporary in feel. We also brought this philosophy to the exterior decks, which closely follow this rich warm theme.” 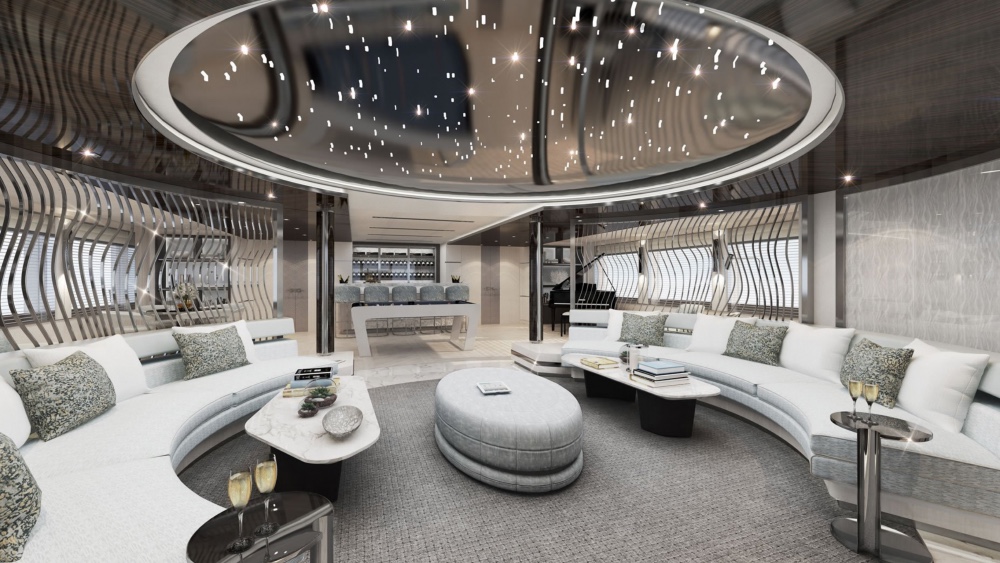 Turkey’s largest-ever yacht was built for an experienced yachtsman. The interior by London-based HO Design is flowing and modern, but with a soft, muted colour scheme. Courtesy Bilgin Yachts

The displacement hull delivers a top end of 20 knots, while her cruise speed of 12 knots transforms the yacht into a fuel miser, consuming only 250-litres per hour.

Built to comply with IMO Tier III certification, Bilgin says its new launch is not only Turkey’s largest superyacht, but the “most environmentally friendly yacht in her class.” Its exhaust system features a filtering system that delivers 100 per cent emissions-free exhaust. That new technology promises to push the rest of the superyacht world forward when it comes to sustainability.