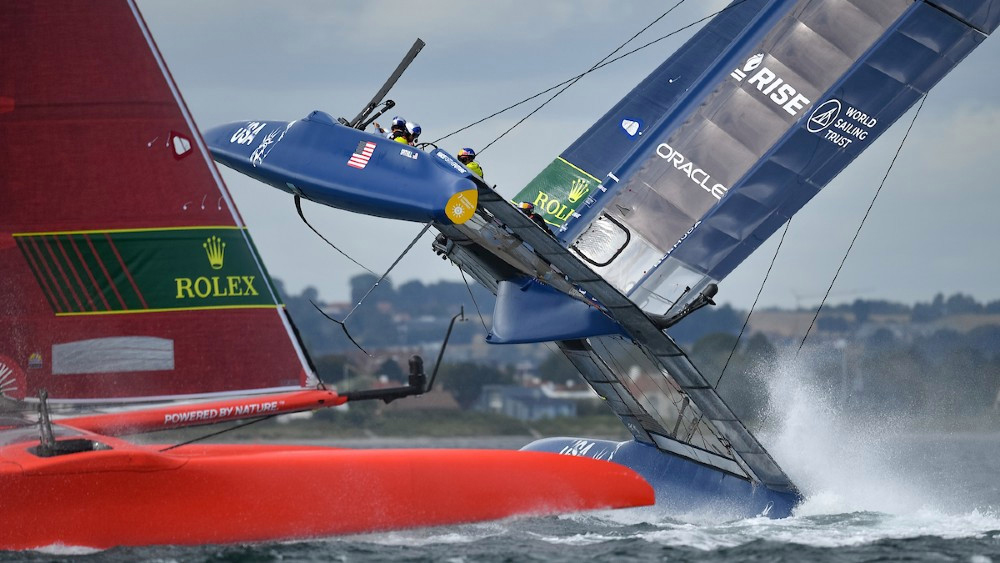 SailGP Is Making Boat Racing Feel Like Formula One

Forget what you think you know about competitive sailing. SailGP is fast, athletic, skilled and explosive–and aiming to go mainstream.

Based on Formula One or MotoGP, this new series is trying to lose sailing’s reputation as a stodgy, boring, rich man’s sport. Instead, it’s going after a younger everyman audience using the same formula as other extreme sports: fast, explosive, dangerous and, of course, televised.

Last weekend, SailGP wrapped up the fourth of eight events in Aarhus, Denmark, with last year’s champion, Australia, staying on top of the series’ leaderboard after claiming the winner-takes-all final race. The local Danish team won the first race, with Frederik, Crown Prince of Denmark as the team’s sixth sailor, but the rest of the weekend was a shootout between the teams from Great Britain, the U.S., Japan and Australia. 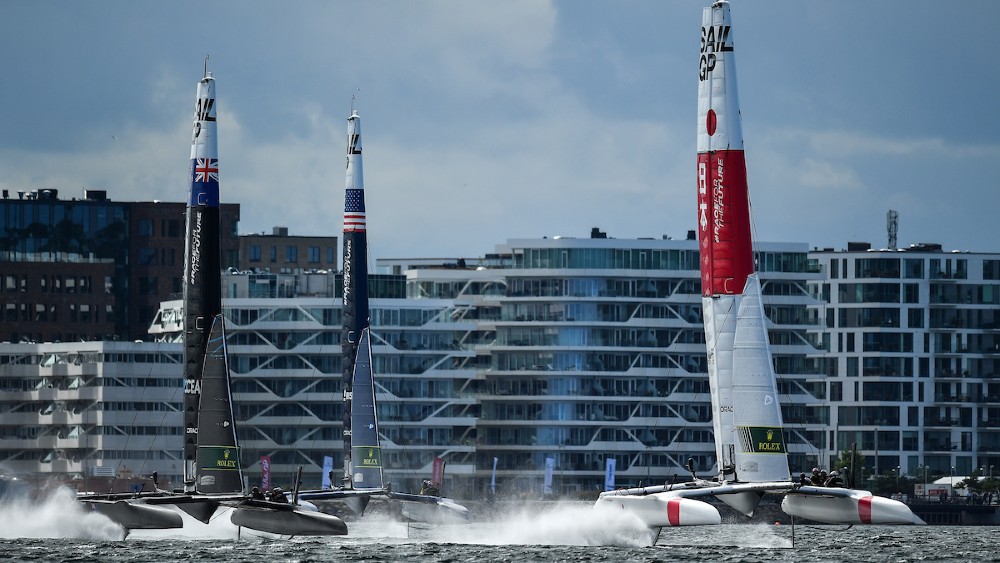 The racing had its usual assortment of thrills and spills, including Sir Ben Ainslie, CEO and driver of Great Britain’s team, breaking the speed record at 98.3km/h —hyper-speed for a sailboat. The Spanish boat capsized hours before racing started, sustaining enough damage to knock the team from the first day’s competition. And the Brits, at that point leading the series, received a penalty call in the final race that Ainslie called, “shocking,” effectively ending their chances at winning the Grand Prix.

SailGP started in 2019, but was cut short by Covid last year. This year’s circuit includes eight national teams competing in eight cities. After Aarhus, racing will move to Saint-Tropez in France (September 11-12), and then onto Australia, New Zealand and finally, San Francisco.

Sir Russell Coutts, a celebrated America’s Cup sailor, and Larry Ellison, chairman of Oracle and leader of five Cup campaigns, came up with the antithesis of the historic, hallowed America’s Cup five years ago when they were trying to figure out a way to bring sailing to a mainstream following. 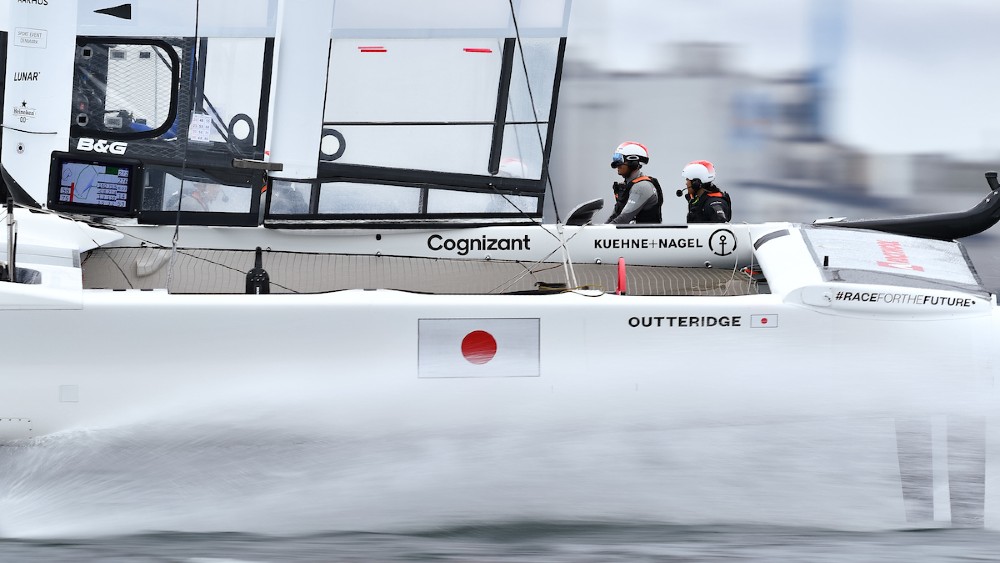 The boats are designed for turn-on-a-dime maneuvering with the ability to reach close to 100km/h. Courtesy SailGP

Instead of randomly scheduled events with lots of secrecy, boat development and very little racing, as the Cup has, the two settled on a formula with eight national teams, regular races on a global circuit, a one-design foiling race boat to maximize speed and minimise costs, all requiring a level of athleticism that matches other sports.

IMG—the global sports firm with dozens of interests from UFC to bull-fighting—gave it the stamp of approval by joining as a minority investor.

“It’s the best opportunity sailing has ever had,” Ainslie told Robb Report. “They see a commercial future for the league that’s based not on sailing’s past, but where sports, in general, are going.” 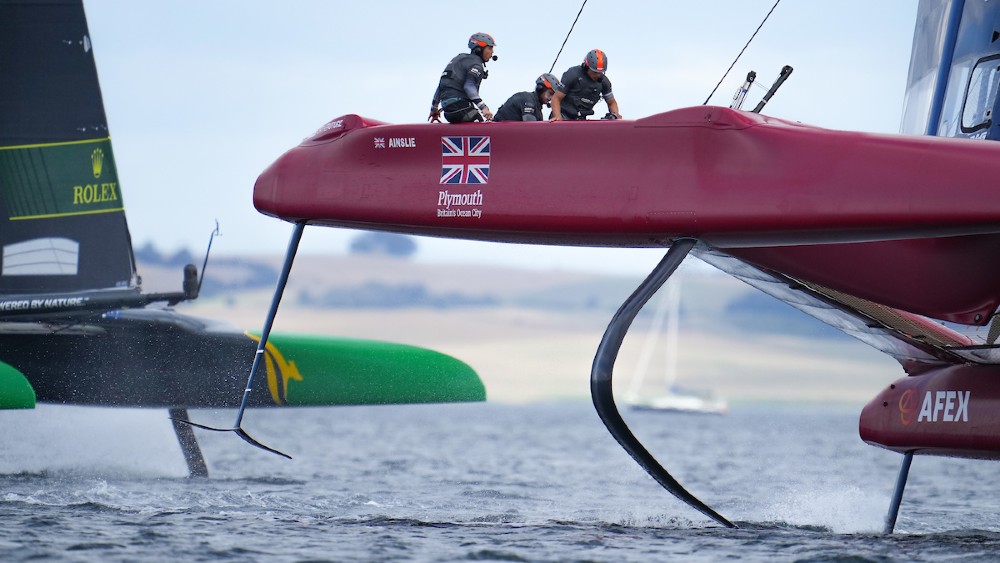 Six sailors in protective gear resembling special forces units, scramble around boats screaming around a racecourse at 70 to 100km/h, hulls often reaching high out of the water on one foil. Speed, strategy and near collisions, as teams jockey for the lead, give the racing excitement and immediacy.

“We’re miked up with cameras on the boat, so viewers are right there with us feeling the stress,” says Jimmy Spithill, another celebrated America’s Cup sailor, and driver for the U.S. team. “The races are about 12 minutes long, so at the speeds we reach, it’s short and exciting.”

Compare that to ten years ago, when most sailboat races were offshore on conventional monohulls, much slower and longer, and inaccessible to spectators onshore. 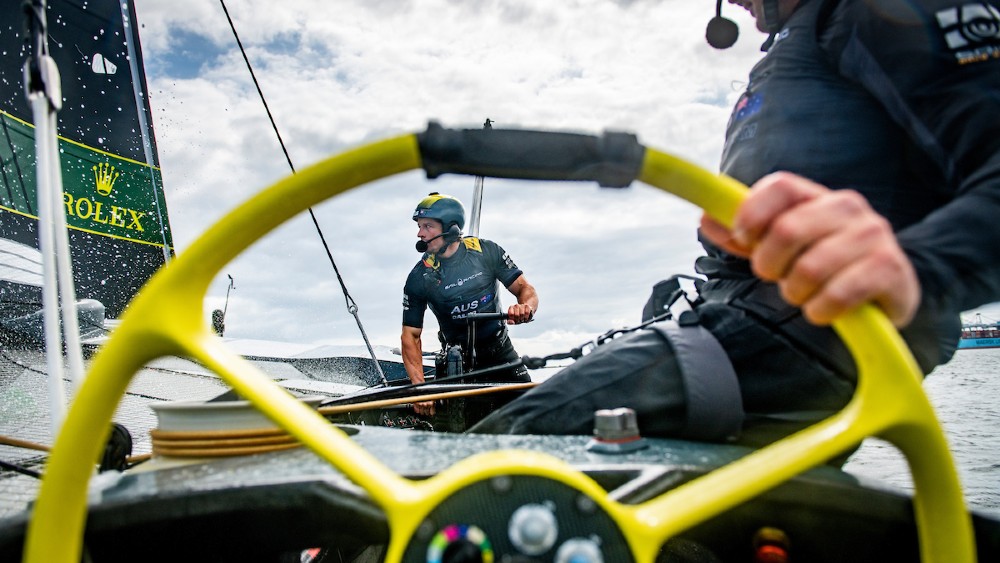 Smaller teams and much faster speeds require quicker reactions and a higher level of athleticism than other forms of competitive sailing. Courtesy SailGP

It all comes down to the foils, says Ainslie. “They have transformed the sport from both the sailors’ and spectators’ points of view,” he says. “You’re eating up so much more real estate in a much faster time.”

That makes for a very different dynamic for the drivers—called helmsmen in America’s Cup parlance—who now have to make split-second decisions, jump across the boat or “multi-task,” as Ainslie puts it, and try to beat the other world-class teams by split seconds.

SailGP’s smaller teams have multiple functions, so they’re constantly in motion during races. “Even the grinders [who trim the wing sail and jib] would be outputting in short bursts in other forms of racing, but they’re constantly grinding now,” says Ainslie. 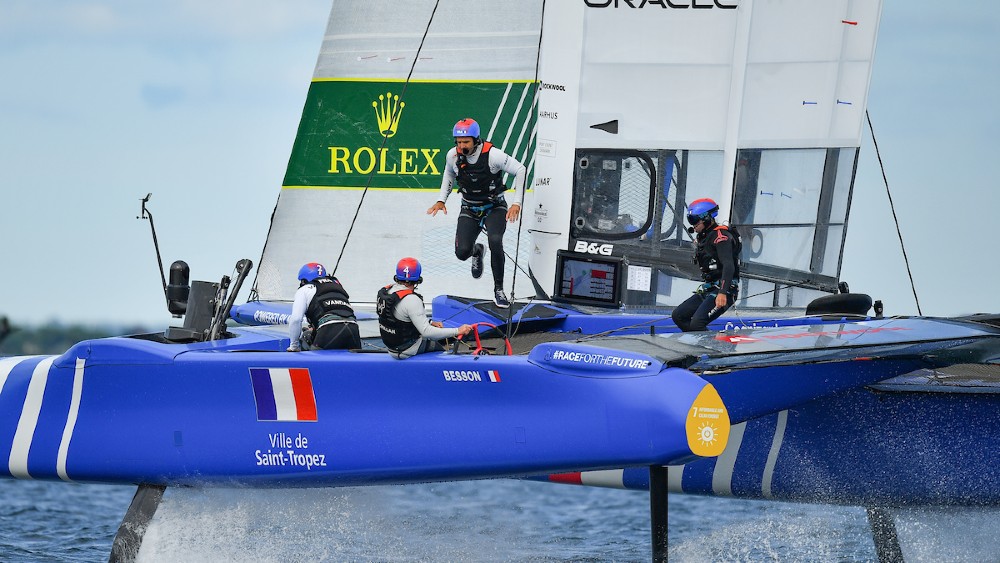 Sailors often have to scramble across the boat on the racecourse. Courtesy SailGP

“It’s the best of the best in terms of the sailors,” says Spithill. “We have Olympic medalists, offshore sailors, America’s Cup sailors, collectively from different backgrounds. The racing is as good as it gets.”

The one-design boat is based on the America’s Cup foiling hull, which raced in Bermuda in 2017. But the 15.24-metre vessel has since been modified into a much faster boat. GP boats in the next series will include redesigned foils to push the performance envelope farther, and possibly a hard-wing sail. “It’s about staying on the edge,” says Spithill.

Despite its upstart status, SailGP won’t be putting the America’s Cup out of business anytime soon. Already, several teams have expressed interest in challenging the current Cup holder, Emirates Team New Zealand. Ainslie’s Ineos Team UK became the “challenger of record” in March, signalling its intent to compete for the 170-year-old Cup several years from now. “I think the two events really complement each other,” says Ainslie. 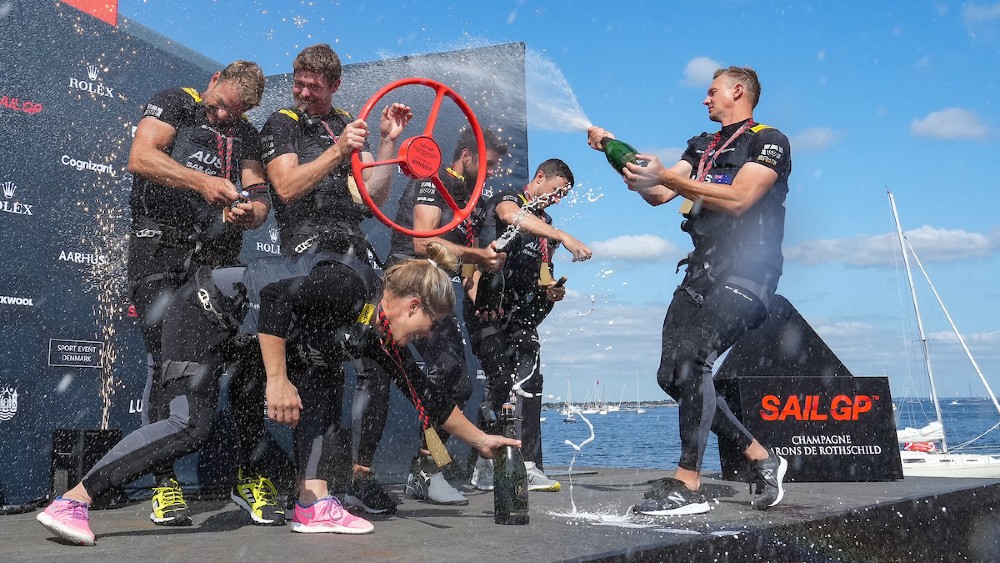 But SailGP has taken a much more contemporary direction, including a more democratic approach to making decisions about the one-class design and future of the league, and instituting youth programs that include STEM education.

Sustainability has also been designed into the series from the outset. Rather than symbolic platitudes about saving the planet, teams actually compete in the Impact League, as part of SailGP. They are scored ranging on how they travelled to the event to on-water boat usage, down to how much red meat they consume and where they sourced their team merchandise. “Everyone is taking it seriously, almost as much as the competition on the water,” says Ainslie. New Zealand currently leads the Impact League board, but Great Britain is not far behind.

In the end, total racing points will determine which three teams compete for the million-dollar purse in San Francisco. “It’s a winner-take-all race,” says Ainslie. “The whole season is decided by that ten-minute race. But it all adds to the drama.”