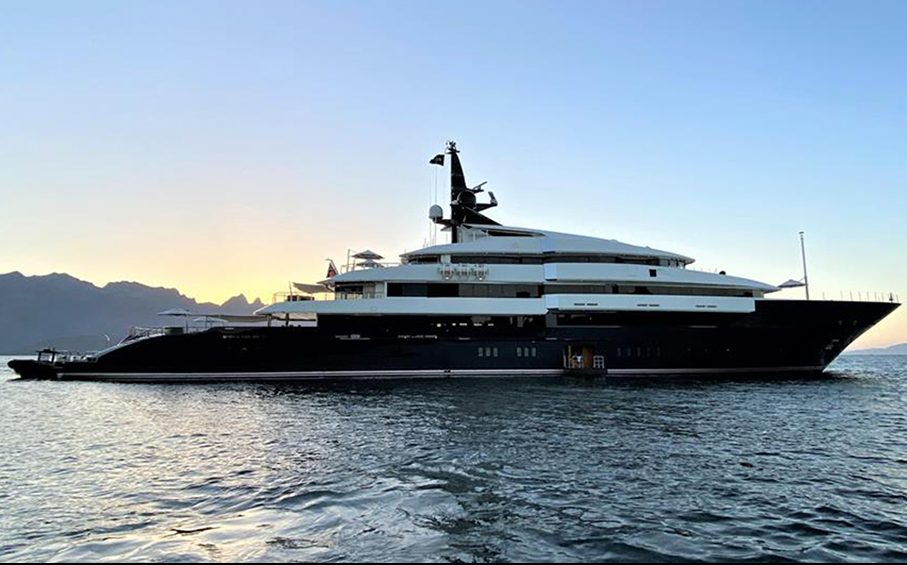 The behemoth vessel can accommodate 15-20 people in up to nine cabins over four decks.

Rich people have multimillion-dollar mansions, maybe even a couple of them. Some even have aeroplanes. But really rich people, the kind with rivers of money to burn on unnecessary high-maintenance luxuries, have boats. And we’re not talking about boats to skitter around the local lake, but rather multi-deck vessels as long as a football field that are able to cross the oceans with handfuls of staterooms as finely appointed as a five-star boutique hotel and on-board garages full of smaller boats and other watercraft.

Johnny Depp sold his 47-metre vessel  in 2015 to JK Rowling, who kept it only about a year or two before selling it on with an asking price of about $30 million; Giorgio Armani’s 65-metre yacht Main is ominously painted entirely black; Barry Diller and Diane von Furstenberg ply international waters in their three-mast sailing vessel Eos, and David Geffen somewhat infamously self-isolated in the Grenadines on his titanic 138-metre Rising Sun last year during the Covid-19 pandemic. 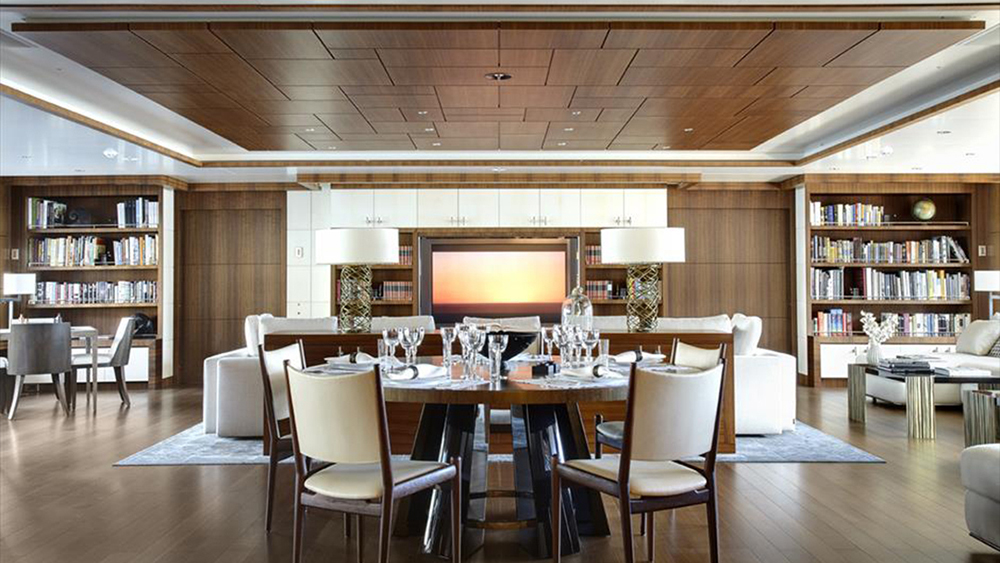 One of the main entertaining areas. Chamberlain Yachts

It typically takes several years to commission, design and build a mansion-sized yacht, and Hollywood heavy hitter Steven Spielberg took delivery of his custom-crafted 86-metre-long Seven Seas in 2010. Now, after a decade of ownership, not to mention reports dating to 2015 that he’d commissioned an even bigger boat, Spielberg’s Seven Seas is available with a breathtaking asking price of€131 million, that’s $206 million at today’s rates.

According to online marketing materials, Seven Seas was built to the owner’s exacting specifications by the Dutch shipyard Oceanco with interior design and décor by Nuvolari & Lenard and Molly Isaksen. The standard set up for the four-deck, Beverly Hills mansion-sized behemoth accommodates 15-20 people in seven (and potentially nine) cabins over four decks. Specifications indicate the navy-blue-hulled boat, which is nearly 14-metres, has a maximum speed of 19.5 knots and a crew of 28, carries 170,000 litres of fresh water and 291,000 litres of fuel that at a cruising speed of 15 knots allow it a range of 8368km, more than enough for a transatlantic crossing. 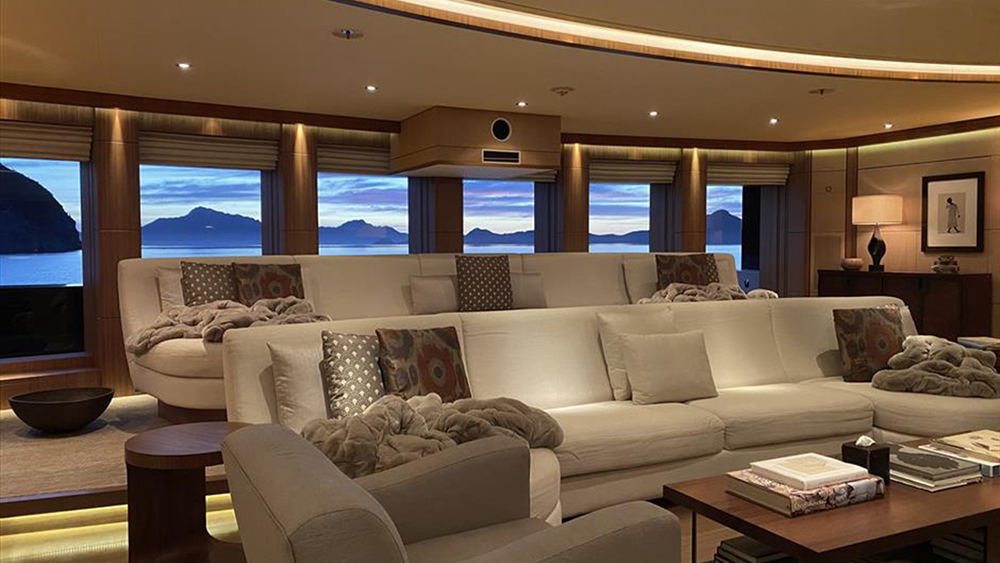 Onboard amenities include a swimming pool, two spas, a total of 17 televisions (plus a screening room), a camera-quipped security system that includes a pirate protection unit and comprehensive smart home technology that controls the audio-visual systems, lighting, climate and window treatments via an iPad.

Spotted in Gibraltar last summer and autumnl amid the COVID-19 lockdowns, marketing materials indicate Seven Seas is registered in the Cayman Islands. 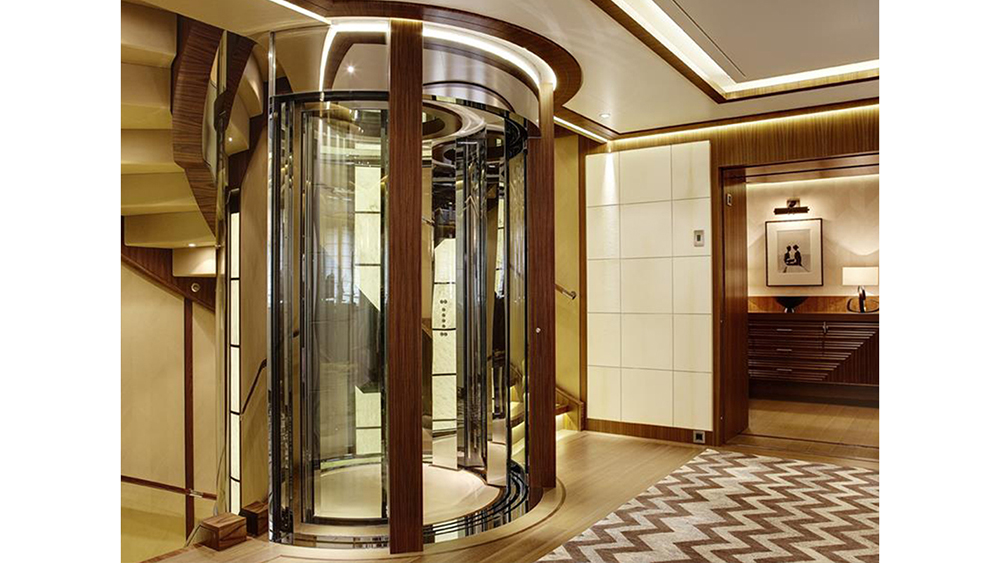 A curvaceous stairway winds between the various decks but it’s much more fun and less strenuous to us the glass elevator.

The wood-panelled main saloon, on an upper deck along with the owner’s suite, is a ballroom-sized space that spans the full width of the boat with multiple seating arrangements, a large TV and a bar with Guinness on draft. Aft of the saloon, a circular dining room has curved walls of floor-to-ceiling glass that slide open to a teak deck perfect for alfresco pre-and post-dinner cocktails. 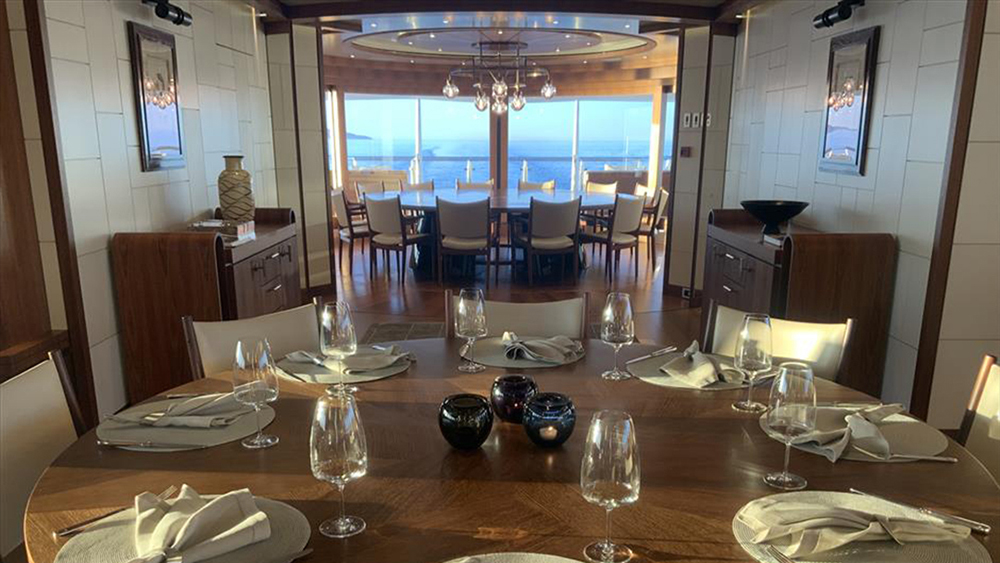 A view of the circular dining room overlooking the ocean. Chamberlain Yachts

Five guest cabins are fitted with ample wardrobes, desk space and a private bathroom, while a full-beam VIP guest cabin, which can be divided into two separate cabins, offers a private sitting room, three closets and two bathrooms. 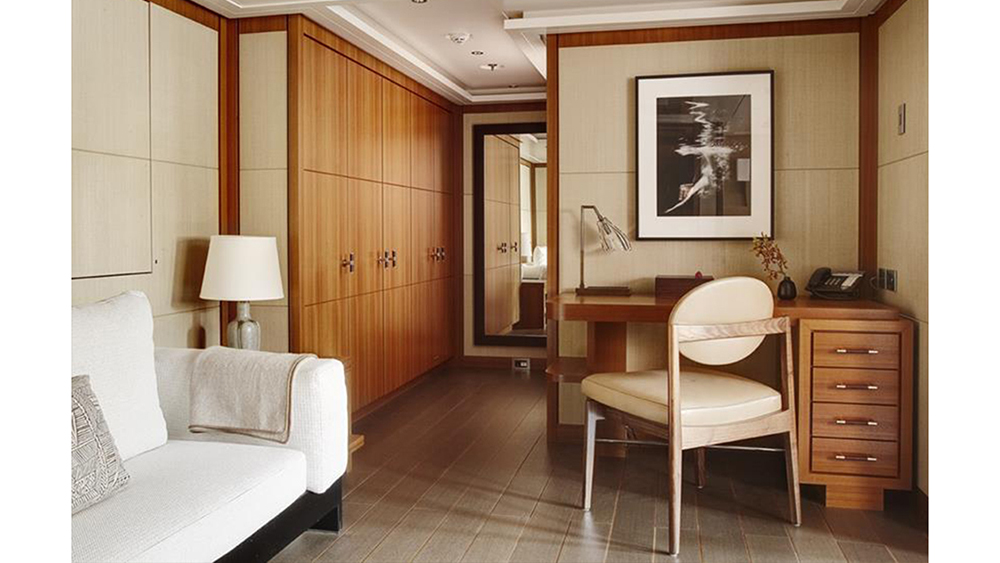 The dressing area in the owner’s suite. Chamberlain Yachts

The owner’s suite occupies a wing of its own on an upper deck with a private office/study, a full-beam stateroom with multiple seating areas, an extensive dressing room lined with built-in wardrobes, and a bathroom that all by itself is larger than a typical Manhattan studio apartment. 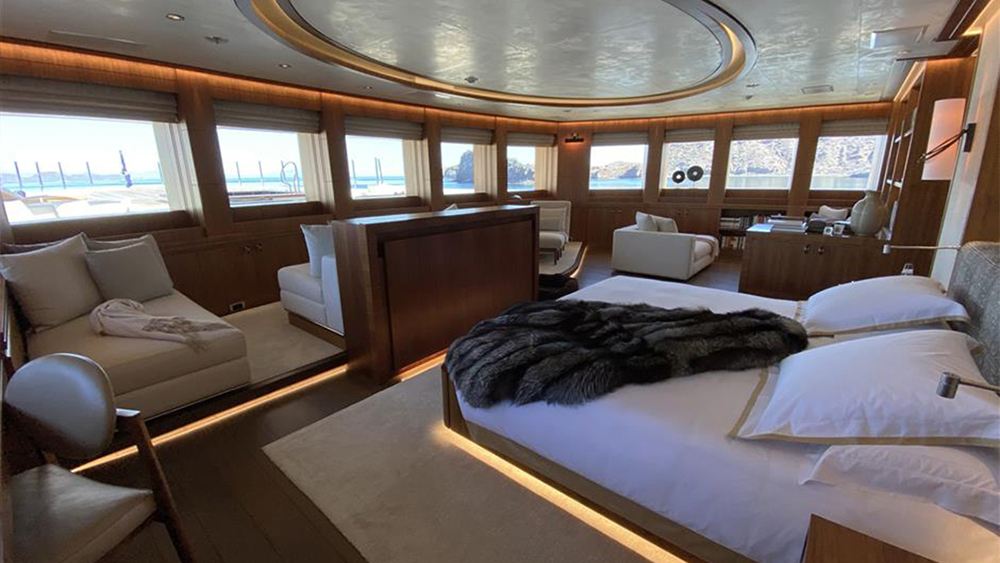 Unsurprisingly given its owner, Seven Seas incorporates a state-of-the-art screening room with tiered seating on plush sofas, a full bar and, for impromptu sing-alongs, a baby grand piano.

The uppermost deck includes the bridge and captain’s quarters along with a fitness room and spa complete with massage room, sauna and steam room. A curved wall of glass slides open at the touch of a button to provide access to a sun-splashed deck with a spa tub. 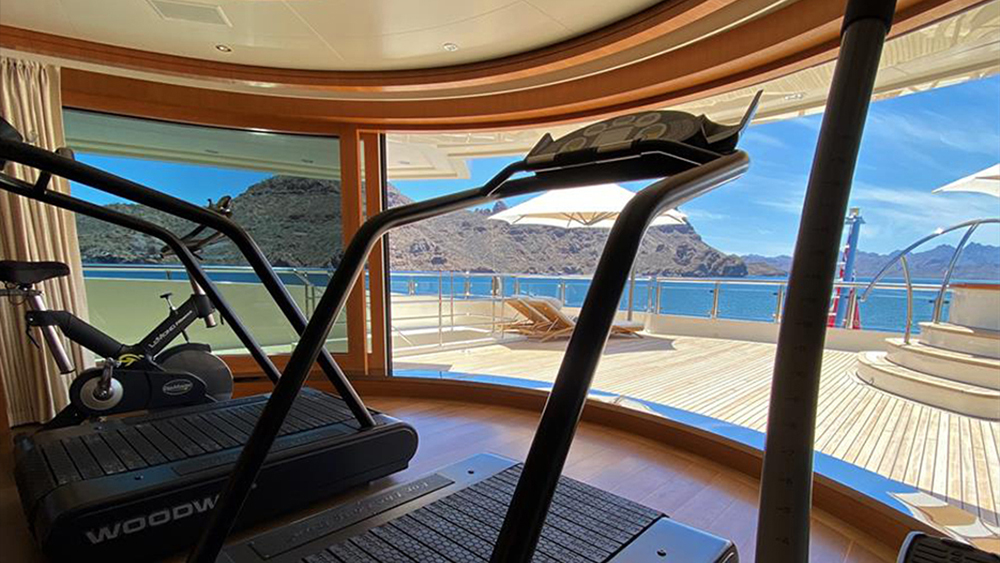 Outside the screening room, at the aft section of the boat, a partially covered 2,700-square-foot teak deck offers a bar, a dining space that comfortably seats 22 and plenty of room to lounge about on cushioned loungers around the swimming pool. Steps on either side of the pool lead down to a swim deck. 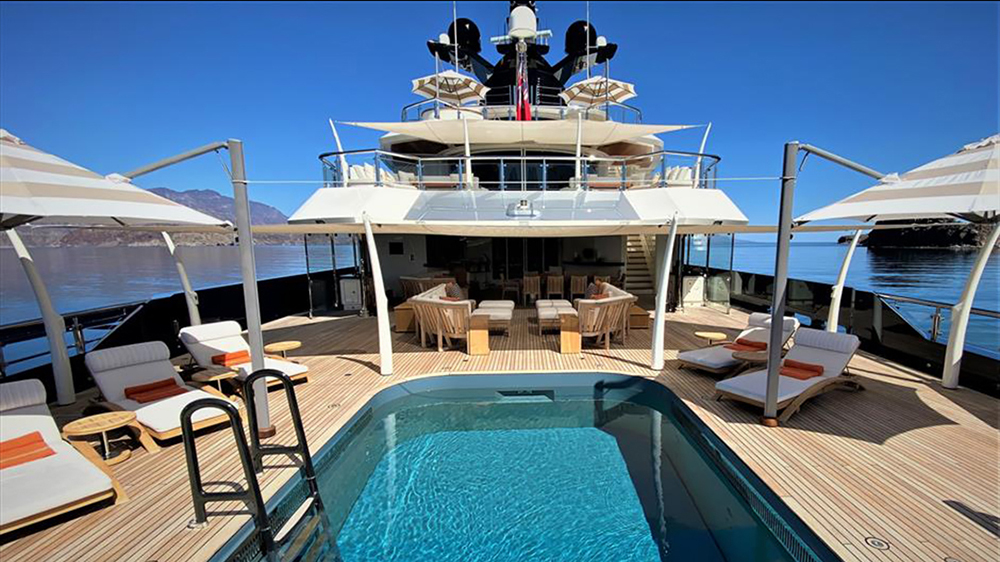 Passengers have easy access to the onboard pool. Chamberlain Yachts

The Seven Seas’ snazzy trio of onboard tenders is every bit as luxe as the yacht they serve and includes a 31-foot sport boat and, for less windy jaunts, a 34-foot “limo” tender. The boat’s massive garage also contains three Wave Runners and a slew of diving equipment, including four Seabobs. 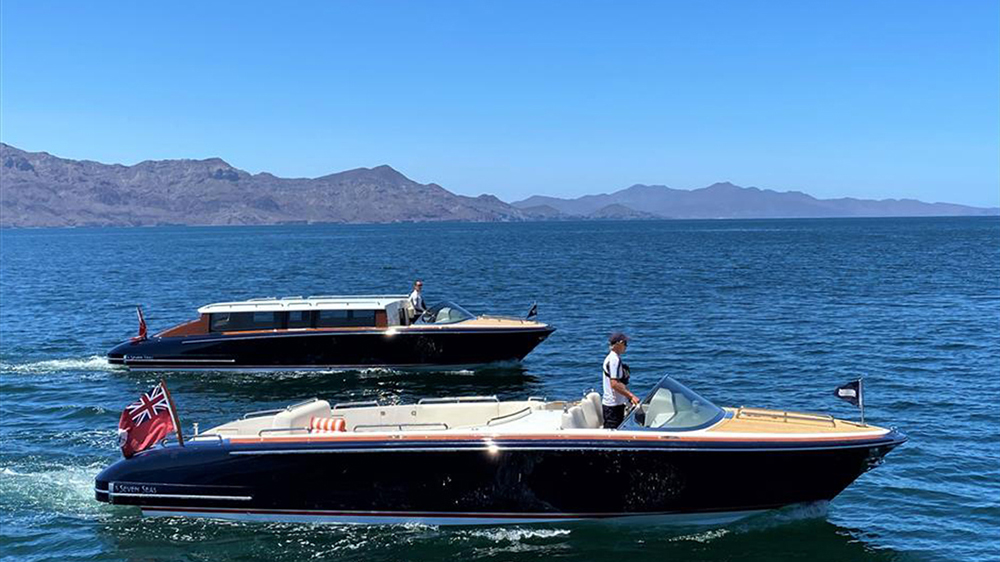 Two of the Seven Seas‘ tenders—a 31-foot sport boat(in back) and a 34-foot “limo” (in front). Chamberlain Yachts

The three-time Oscar winner, who named Seven Seas after not only the seven seas of the world but also his seven children, and his wife, former actress Kate Capshaw, sold their sprawling ocean-front compound in Malibu in 2015 for about $33 million to real estate tycoon Steve Gozini, who unsuccessfully tried to sell it the following year for $45 million. Still, they maintain an impressive roster of terra firma residences. In addition to their 20,000-square-foot Mediterranean villa in L.A.’s posh Pacific Palisades — the house was previously owned by Dougles Fairbanks, Jr., David O. Selznick, Cary Grant and Barbara Hutton and Bobby Vinton, there’s a nearby equestrian facility tucked into a quiet canyon. And, on the other coast, they preside over a pond-front multi-residence estate in one of the more coveted areas in the Hamptons that includes a barn-style main house and a guest house designed by famed architect Charles Gwathmey. 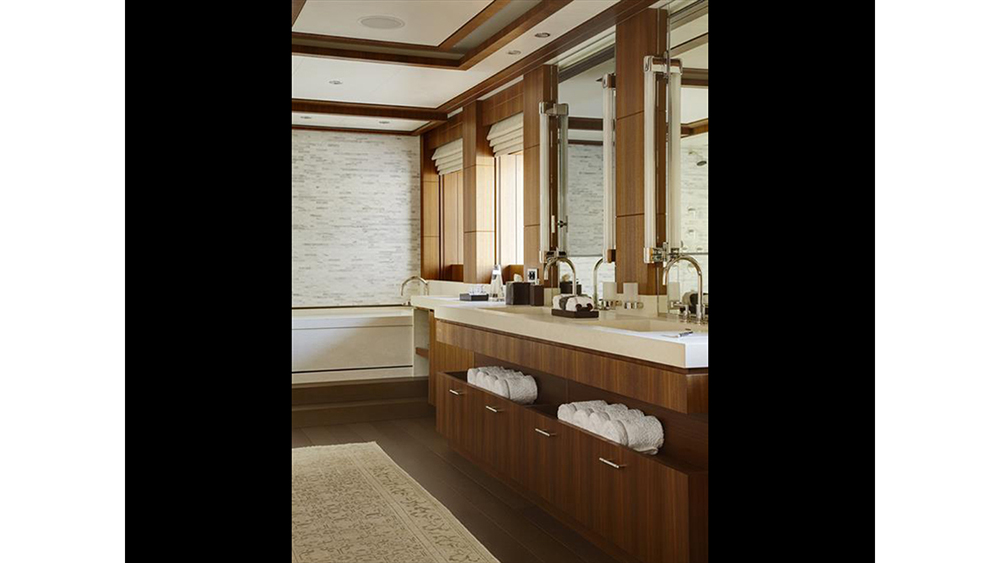 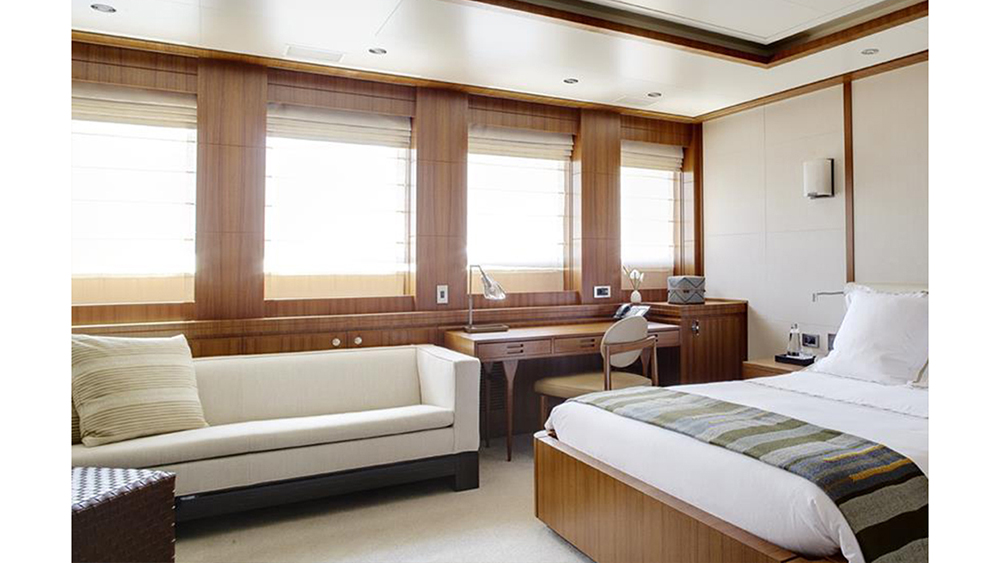 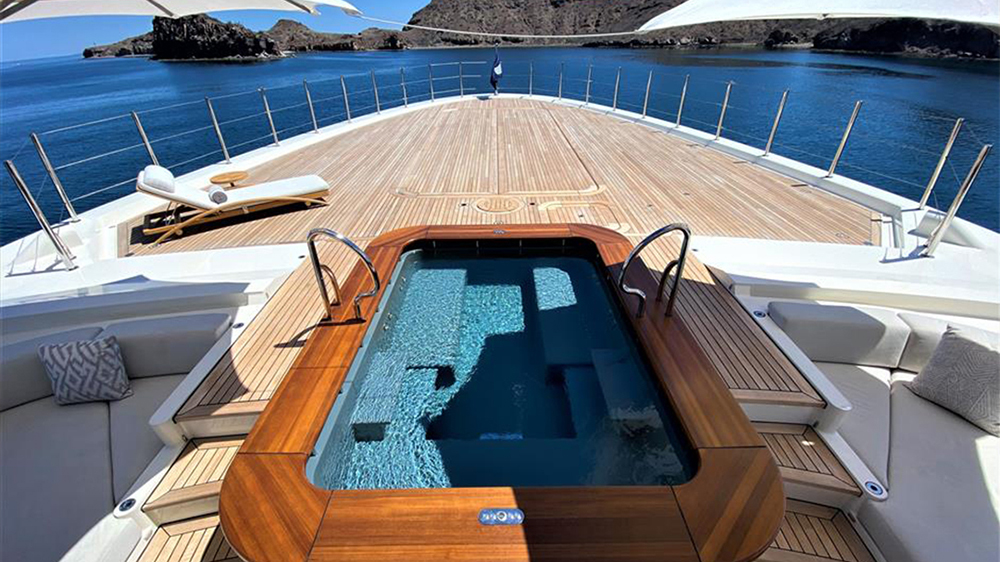 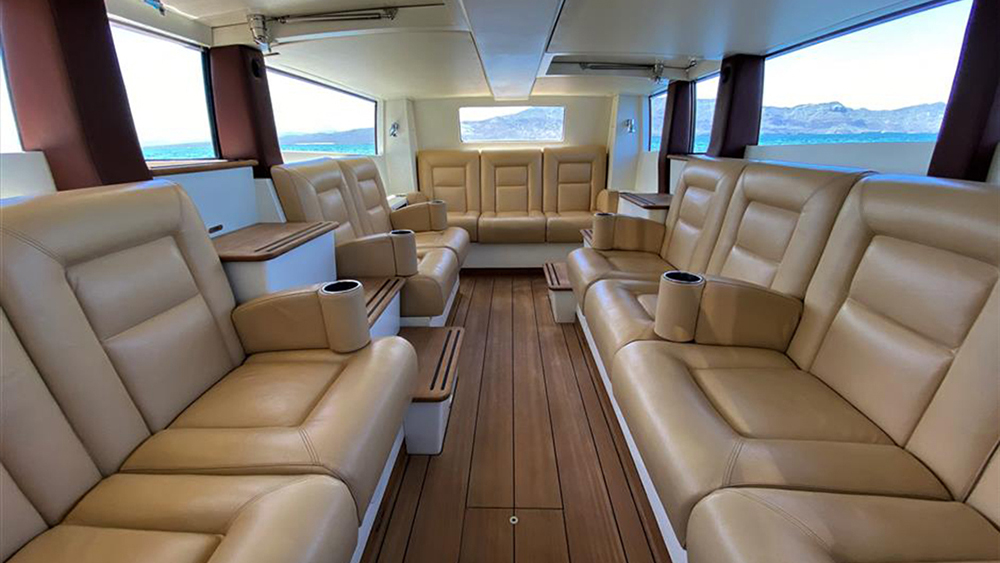 This article was originally published to Dirt.