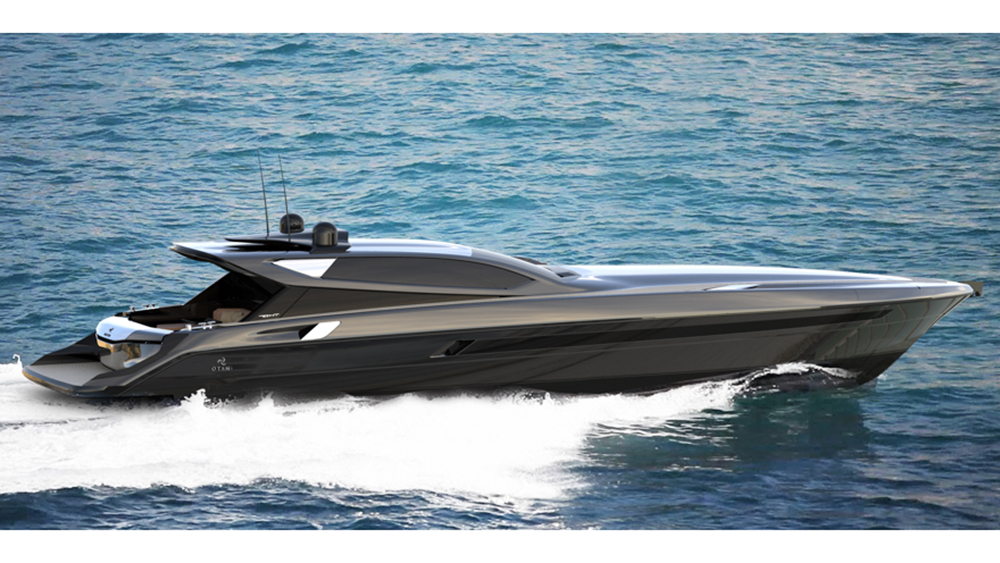 The Otam 70HT is the next step up the evolutionary ladder of a typical go-fast yacht, with a wealth of custom details.

Building a 50-knot, ocean-going performance boat with modern comforts and luxury appointments is not a problem for Otam, which has been doing just that for 60 years. Coming up with an iconic design for such a boat is more challenging.

“We wanted something you recognise at first sight, with no doubt,” Otam’s sales and communication manager Matteo Belardinelli told Robb Report. “We wanted to bring the details to a higher design level and create something that gives the feeling of acceleration and speed, even when moored to the dock.”

The highlights of the Otam 70HT include a raked, tinted superstructure capped with a radar arch that recalls a manta ray; scooped air intakes in the hull, on the foredeck, forward of the windscreen and under the radar arch; and stylised aft exhaust vents that can be fitted with accent lights.

The actual performance, including a 40-knot cruising speed, comes via twin 2,000-hp MAN or MTU engines (Otam is investigating more powerful engine options), which hook up to Arneson drives with custom Otam-Rolla propellers.

Otam’s new 21-metre vessel, which runs over 50 knots, goes beyond the typical go-fast motor yacht with exquisite details in the interior and exterior. Otam

“Otam buyers look for the real meaning of extreme customization, not just buying a serial product but building their own one, never similar to another and perfectly reflecting their personal style and main needs,” Belardinelli says. To accommodate such variety, Otam offers interchangeable options. The yacht has a base price of $6.8 million, or €4 million. The exterior includes forward and aft sun pads, an aft tender garage and multiple helm and cockpit layout configurations.

Belowdecks there is even more variability. Hull number one, which is under construction and should have its world introduction in Spring 2021, has separate crew quarters (with its own galley) as part of a three-stateroom mix, but the options are many. “One-of-a-kind customisable construction is our calling card, and no two Otam yachts are the same,” Belardinelli says.

More important to the Genoa-based builder, no other brand is the same. Says Belardinelli: “We certainly wanted to avoid the major risk of what is happening in the market today—too many similarities exist between different designs in the same product segments.”