Well, it does emit something: water vapour.

Lürssen is typically tight-lipped about its high-seas endeavours, but, evidently, it can’t contain its excitement about a certain groundbreaking new vessel. The German shipyard has just announced the sale of its first superyacht to be powered by hydrogen fuel-cell technology.

The yard’s managing partner Peter Lürssen recently revealed the news during Lürssen Live in an episode about alternative propulsion technologies.

“Contrary to our normal behaviour we can tell you today that we are actually building a superyacht with a fuel cell installed on the yacht,” Lürssen said. “It is very exciting and he [the owner] gave us permission a week ago to talk about it. This, I think, will push the eco-friendliness of yachts to a new dimension in the new future.” 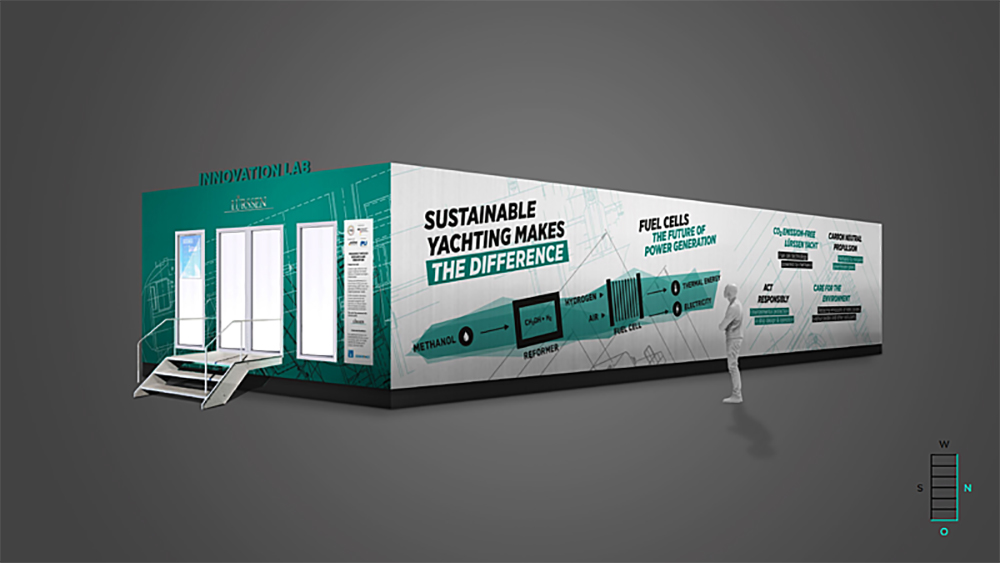 A rendering of the test plant being built at the yard. Lürssen

The yard has been working on the methanol-hydrogen fuel cell power plant since 2012 in partnership with the experts at the Freudenberg Group. Essentially, the plant converts methanol into hydrogen, which is then used in fuel cells to generate electricity. The yard says fuel cells have very little maintenance and are more efficient than a diesel engine, plus the only byproduct is water vapour.

This isn’t the first time we’ve seen fuel cells pop up in superyacht design. In September 2019, Sinot unveiled the radical 110-metre concept Aqua which was fitted with a hydrogen propulsion system. However, Aqua’s setup will be fully powered by liquid hydrogen whereas Lürssen’s plant converts methanol into hydrogen. Methanol is much easier to handle and store than liquid hydrogen and can still carry a lot of hydrogen within its chemical composition.

Lürssen said the client, who “loves technology and new developments,” requested the yard prove the “practical value” of the new propulsion before greenlighting the project. That value comes in the form of range, autonomy and sustainability. Lürssen says the zero-emissions setup will allow the owner to spend more than 15 nights at anchor or travel more than 1,000 nautical miles without releasing any harmful pollution.

“I think it’s a clear signal that owners who already invest substantial amounts in building yachts are willing to invest that extra bit of money to make that quantum leap of furthering propulsion technology and power technology on a yacht, and this will be a game-changer, especially since it has a lot of practical use,” Lürssen added.

The yard is expected to start testing the methanol-hydrogen power plant this spring. The test plant (pictured above) will produce roughly 120kW of energy and will be used to power one of Lürssen’s production sheds. The first vessel to feature the technology will reportedly be delivered in 2025. We’re certainly glad this superyacht’s out of the bag.