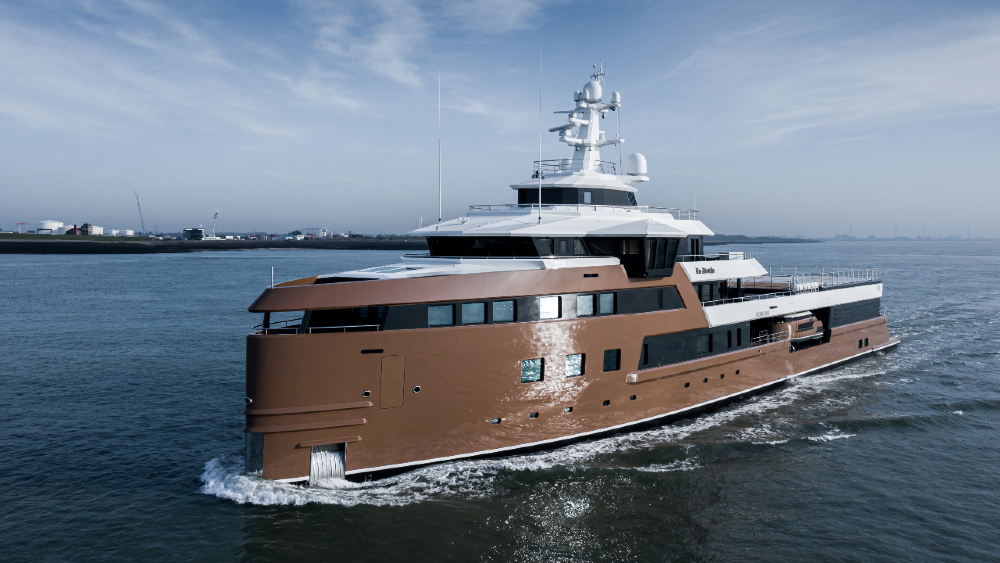 The explorer yacht isn’t built for a languid trip through the Carribean.

“La Datcha is a luxury vessel designed for serious exploration,” says owner’s representative Stefano Feltrin. By serious, he means ends-of-the-earth exploration, and not just a trip around the Caribbean. The just-delivered 76.8-metre superyacht, the first SeaXplorer from Damen Yachting, will be proving its pedigree in the next few months, with extreme-sports trips planned to Kamchatka, a remote Russian peninsula on the Pacific, and afterwards to Antarctica.

While the owner will love this unique shakedown cruise, La Datcha is also armed with a raft of custom features geared towards making it one of the most advanced charter yachts to ever hit water.

The Polar Code-compliant boat is capable of being autonomous at sea for up to 40 days. It is also the first yacht to carry two commercially certified helicopters in separate garages. When one helicopter has taken off from the heli-deck aft, the second is maneuvered into position on a custom-built trolley. “It takes only a few minutes to transit the helicopters from parking, to the helideck and then to flight,” Feltrin told Robb Report. 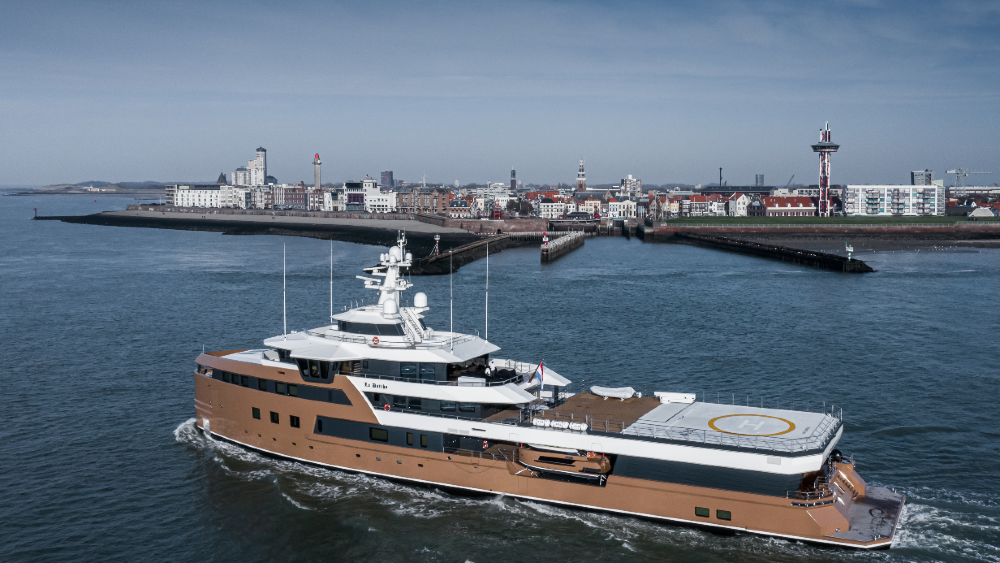 La Datcha has an internal trolley system so its two helicopters can be removed from their separate garages and placed on the helipad for quick takeoff. Courtesy Damen

The significance of a two-heli setup comes into its own, once the yacht reaches the extremely remote waters of Kamchatka in March. Rarely visited by superyachts, it is a diverse cruising ground rich in wolverines, geysers, volcanoes and, for the owner, heli-skiing.

“The area’s extreme-sport offering is limited by the types of helicopters available, so we’ll be using the boat as a floating helipad and exploring some of the never-before-skied slopes,” says Feltrin.

The owner plans to stay in Kamchatka and the Kuril Islands for summer 2021, before heading to Antarctica in November, and then exploring Chile and Patagonia. Safety regulations for heli-skiing in these areas mandate a strict two-helicopter minimum rule. Typically, guests work around this requirement by chartering two boats, which means La Datcha’s setup gives the boat a real edge as a charter proposition. 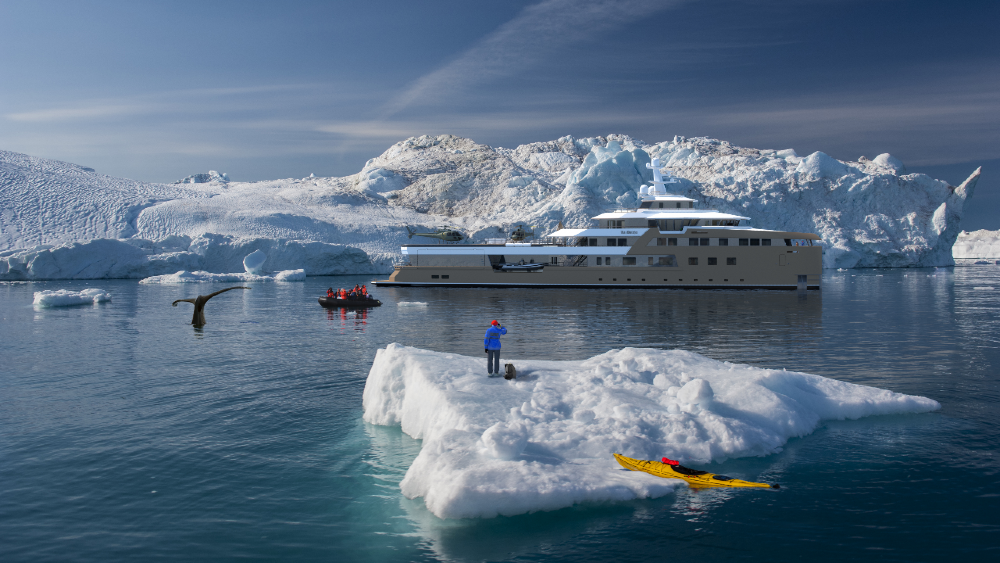 The yacht will journey to remote regions like Antarctica, so participants can engage in extreme sports like heli-skiing and nitrox diving. Courtesy Damen

“The SeaXplorer is a moving platform on which to do outdoor activities,” says Feltrin, CEO of the La Datcha Tinkoff Collection, which also includes a number of shoreside properties. “We’ve taken great care to create a number of redundancy systems on board so that we can operate at all longitudes with proper connections.”

These include a fully certified hospital emergency room, with remote connection to a 24/7 doctor on call and crew with medical training. A three-passenger submarine for diving the waters of French Polynesia and Papua New Guinea. A state-of-the-art scuba diving centre equipped with an onboard decompression chamber and enough compressed air and Nitrox to allow all 12 guests to dive together for as long as they choose.

“We can actually be on the water for seven days, never go on land and still manage a full day of diving, every day, for all the guests,” says Feltrin. 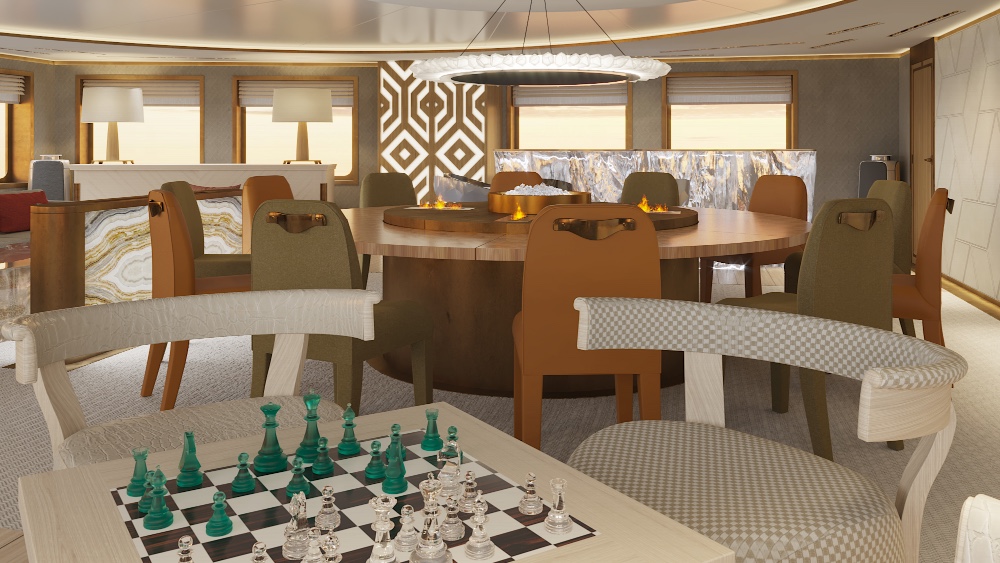 Along with a glass observation lounge and other refined interior spaces, La Datcha has a certified hospital emergency room, three-passenger submersible, and state-of-the-art scuba centre. It can stay on the water autonomously for 40 days. Damen

A glass observation lounge is a key feature of the SeaXplorer series, but La Datcha’s lounge, with its open terrace on the bow and sculpture by Italian artist Gio Pomodoro, is larger than was originally planned.

The exterior is a collaboration between Damen and Azure Yacht Design & Naval Architecture, while the interior is by Vasiliy Shprits. La Datcha is Shprits’ debut yacht, but the style is consistent with the contemporary and warm interiors he has designed for the owner’s property portfolio.

Key areas on board include a guest staircase with backlit rubber walls that gradually change colour throughout the day, and a dual master suite layout designed to accommodate friends and families to charter together while also enjoying the equal-sized master and VIP cabins. 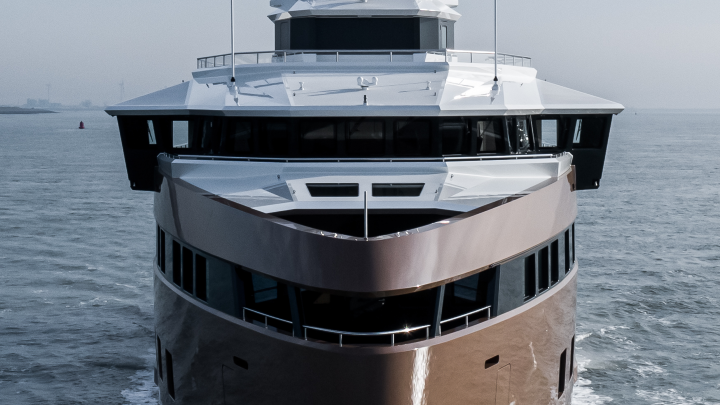 The yacht is the first of Damen’s SeaXplorer series, though modifications were made to enhance the owner’s love of extreme sports. Courtesy Damen

“The owner was heavily involved in the design of the yacht,” Shprits told Robb Report. “He gave his input for all of the important styling decisions and so feels a real connection to the vessel.”

La Datcha may have been conceived as a charter yacht with an ambitious itinerary, but the owner intends to spend as much time as possible on board with his family in each destination. “We plan to go to Tuscany and spend a week in Cabo San Lucas, Mexico, on the way down to Antarctica,” says Feltrin. “So, for those areas, we’ll drop anchor right in front of the owner’s La Datcha homes.”