Heesen’s muscular, new 55-metre vessel, formerly known as Project Pollux, has been delivered to its owner as Moskito. The latest Heesen has what designer Omega Architects calls a “shark-tooth” superstructure with vertical windows and a dramatic overhang above the second deck. After delivery, Moskito will make its first cruise to Malta, a 2,800-nautical mile journey that will pass 81 waypoints.

The shakedown cruise will also prove the efficiency of its fast displacement hull form which, paired with twin MTU 8V 4000 M63 engines, sips only 151 litres of diesel per hour at 11 knots. That’s exceptional fuel economy for a yacht this size. Top speed is 15.5 knots. At 13 knots, the boat has a range of 4500 nautical miles.

Moskito has a large foredeck for the tender and crane, along with a lounge, while the main socializing happens on the flybridge, with its hardtop and Jacuzzi. The rear decks below allow for alfresco dining and access to the water. 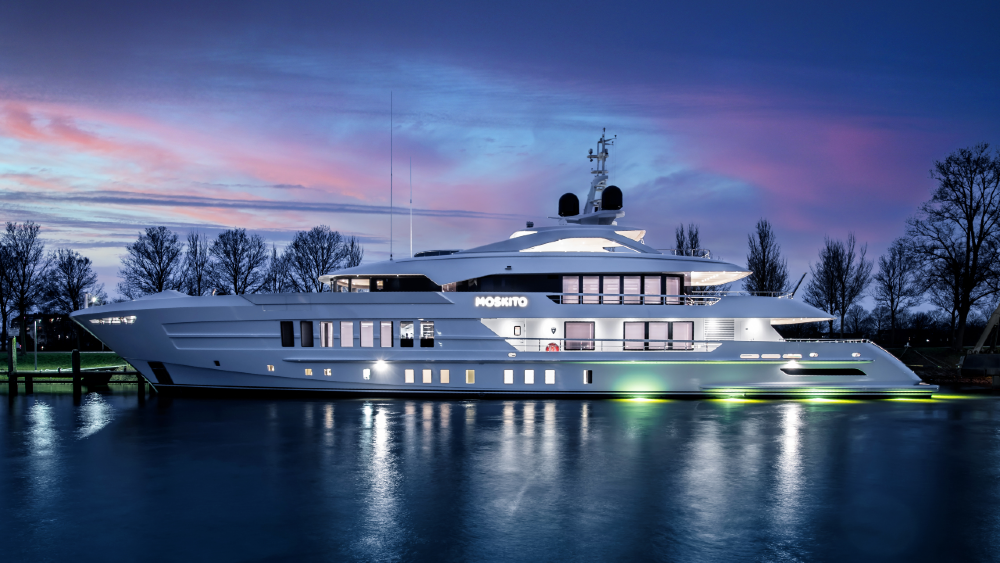 Moskito’s main salon and dining area, according to its interior designer, “work equally well whether you’re in shorts and T-shirt or dressed for dinner.” Courtesy Tom Van Oossanen

The owner also wanted the London studio to drill deep into the details by having them select the artwork—and even the books—so the yacht was delivered as a complete package. “We don’t always get to remain design control freaks like this,” quipped Bannenberg.

Moskito has a six-stateroom layout, including a master suite for the owner, and five staterooms for 10 guests. The 13 crew are housed in seven cabins.