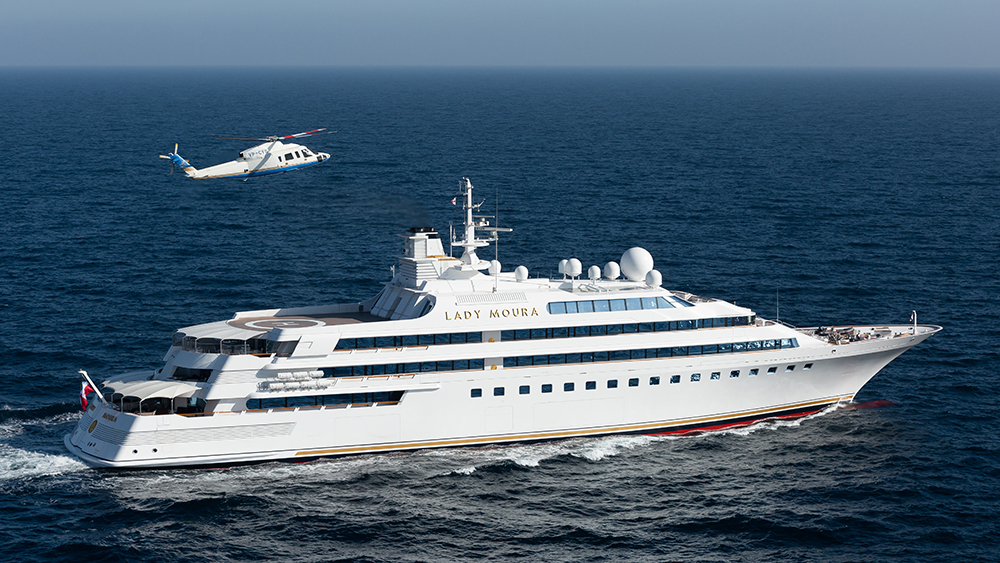 Inside The Lady Moura, A 104-Metre Mansion On The Water

The veil has finally been lifted.

When it comes to superyachts with authentic pedigree, few have as much blue blood as the 104-metre Lady Moura. When she was delivered to her owners in 1990 by German shipyard Blohm+Voss, the levels of design innovation and onboard engineering were unprecedented. Built to be a private residence, the yacht has been cloaked in mystery to the outside world for three decades.

Now that the yacht is for sale for the first time by her original owner, the veil has finally been lifted. Robb Report was one of the first outsiders to tour the yacht recently at a Monaco event hosted by Lady Moura’s broker, Camper & Nicholsons.

“The owner’s intention was to make an impact,” says Captain Matthias Bosse, who first joined the yacht as Staff Captain in 1992. “He wanted to build the biggest yacht, at the best shipyard, with the most advanced technology in the world.”

Bosse adds: “She was built to be a family home, not for cruising.”

The beach club, now commonplace, was a radical concept in 1990. Camper & Nicholsons

A family home indeed. Two fully equipped ICU units and a fulltime onboard doctor are not standard protocol on most superyachts. Neither are two galleys—one for the owner, the other for the crew—with up to six chefs and a separate bakery. And few superyachts that spend the majority of their time running between Monaco and Palma carry a permanent helicopter on board. Conforming to the conventions of the world, however, was never the owner’s priority.

Making statements in design and technology were. Well ahead of her time, Lady Moura has one of the first beach clubs on a superyacht, and an entire owner’s deck. The owners also wanted a clean exterior look, so all doors, flaps, roofs, gangways and cranes are hydraulically operated so they can be sealed tight against bulkheads or into floors. Most equipment is hidden behind integrated hydraulic doors, including the yacht’s tenders, anchors, and even a set of navigation lights designed for the sole purpose of traversing Egypt’s Suez Canal (but were sadly never used).

A helicopter permanently attached to a yacht based in Monaco was considered unusual, but Lady Moura’s owners wanted what they wanted. Camper & Nicholsons

The yacht has a range of more than 8000 nautical miles at her full cruising speed of 17 knots. She was never run at full capacity. The farthest, in fact, she ever ventured from the Med was to the Caribbean in 1993. Lady Moura was a homebody.

What a home. Matching her 104-metre length is a huge internal volume of 6460 gross tonnes across seven decks, including a deck for the owner’s family. She accommodates up to 26 guests, serviced by 72 crew and staff, and two crew elevators. Painstakingly preserved with regular maintenance and vigilant upkeep, Lady Moura is a museum piece adorned with Art Deco detailing and sumptuous styling.

The yacht was used as a permanent home by the owners, so areas like the formal dining room were rarely used. Camper & Nicholsons

Perhaps the most surprising element during our tour is Lady Moura’s immaculate condition. Thirty years after launch, she has all her original flooring, carpets, walls and staircases. The silk walls in the guest cabins look as new as they did in 1990. Not even a new coat of paint has been required to spruce up Luigi Sturchio’s original interior colour scheme.

The simple reason for this unusually high level of preservation is that Lady Moura has barely been used, other than by immediate family. The formal 24-seater dining room has entertained guests just three times—the most recent being last month to announce her sale.

The spa was part of an elaborate beach club on the owner’s deck. Camper & Nicholsons

Despite her age, Lady Moura feels like a modern yacht. Her beach club was considered revolutionary three decades ago and stacks up well beside contemporary superyachts. Positioned amidships with balconies both port and starboard, the club transformed how the owner could access the yacht from the water. The indoor pool with its retractable roof, gym, spa with sauna, and cinema complete the full complement of entertainment amenities.

The owner’s deck was also a novel concept. Reserved exclusively for family living, the floor contains six guest cabins, and a full-beam master suite. Generous walk-in wardrobes and two en suites pair with enough space for the owner to comfortably remain within his private quarters (as he did when the yacht became his permanent residence in 2018). Below-deck cabins, including a full-beam VIP, are reserved for non-family guests.

The superyacht had an overhaul for seven months in 2017 at Blohm+Voss, and her 2018/19 refit focused on rebuilding the generators and engines, installing new teak decks and refurbishing crew and technical spaces. Captain Bosse, who is obviously partial, believes that her sale price of about 250 million euros or about$428 million represents excellent value, given her condition and design. He calls it “the steal of the century.”