When Dream Symphony was first announced in 2014, the yachting world was all aflutter. At 140-metres in length, it promised to be not only the largest yacht produced in Turkey, but the largest sailing yacht ever built (except for the sail-assisted motoryacht Sailing Yacht A, which is technically more motorsailer than sailboat).

Even more incredible is that Dream Symphony was to be constructed entirely out of wood. The use of epoxy laminated iroko (African teak) forms an integral part of boatbuilder Dream Ship Victory’s vision to successfully bring laminated wood into modern shipbuilding. The yard has a successful track record. In 2013, it delivered the 64.6-metre Mikhail S. Vorontsov, built entirely out of laminated mahogany.

At more than double the length, Dream Symphony is a much larger technical challenge. Of course, the biggest challenge since its announcement seven years ago has been finding an owner—or rather a second owner. After the initial brouhaha about the world’s largest sailboat, Dream Symphony went dark. 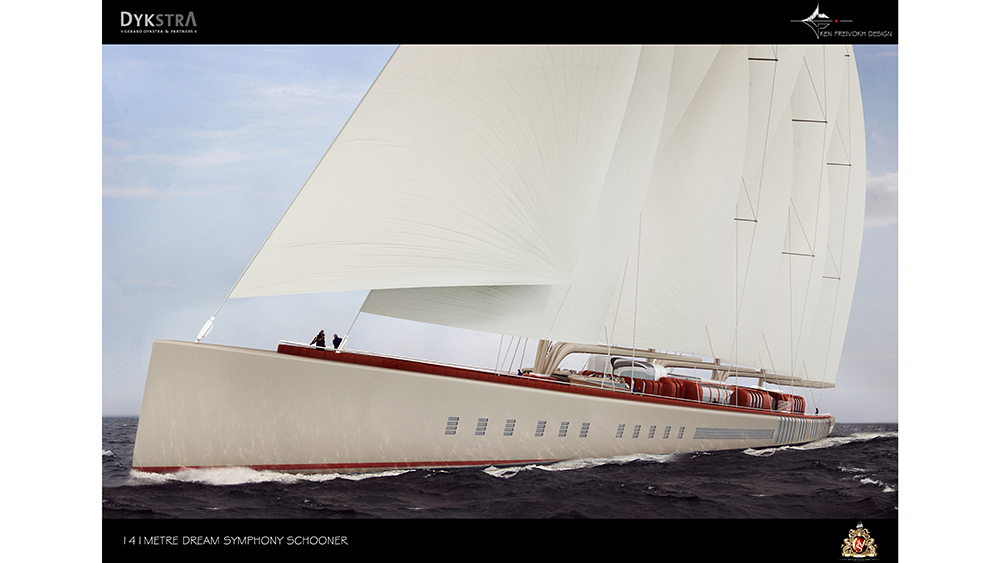 “The original owner pulled out when the Ukrainian crisis came about,” Dream Symphony’s designer Ken Freivokh told Robb Report. “The project went on up to a point, a bit slower, but now we’re looking for a new owner.”

Actually, the project has been stalled. Freivokh shared images of a partially built hull inside the shipyard, and he says it has since progressed, but not to the point where it’s anything resembling his majestic renderings. While gigayachts in the motoryacht segment are being ordered and delivered with regularity, the world’s largest sailing yacht will require a very special owner.

When—or if—the yacht is completed, it will be worth the wait. Dream Symphony reunites the same A-team that conceived the iconic sailing superyachts, the 106-metre Black Pearl and 88-metre Maltese Falcon. The hull design and engineering were completed by Dykstra Naval Architects, while Freivokh was responsible for the interior and exterior.

“Building the largest sailing yacht is what the shipyard owner has always wanted to achieve,” says Freivokh. The shipyard’s preference for wood is based on the material’s renewable and recyclable properties. But the yard’s principals take it a step farther by asserting that wood produces a vessel of “equal or even greater strength” than steel and aluminium. 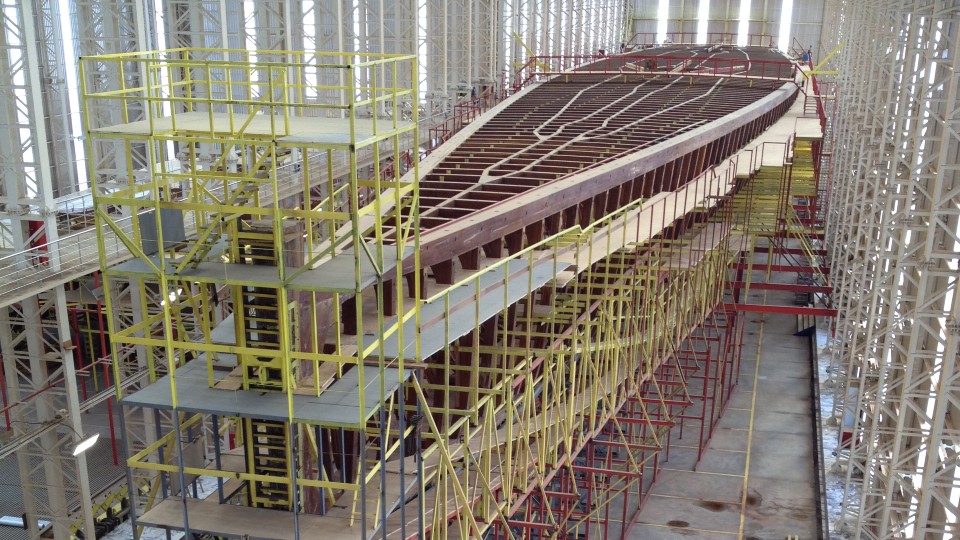 An early image of Dream Symphony under construction. The build has progressed, but is still waiting for an owner to see it to completion. Courtesy Ken Freivokh

It has not been smooth sailing, though. When Dream Ship Victory approached RINA to certify construction, the Italian marine agency balked. It had never certified any wooden vessel over 30-metres in length. There followed an exacting process managed by Dykstra Naval Architects, involving composite experts Gurit, and exhaustive testing by laboratories at the Delft University of Technology in Holland and Italy’s University of Messina. The results satisfied RINA to certify construction and the build began.

“It’s almost the equivalent of a huge composite build,” said Freivokh. “The epoxy lamination is quite a complex system, but it preserves the wood, which means it should last a long time and behave very predictably.”

The original owner called for elegant use of wood across the interior. “The idea was to express the beauty of wood, so the owner was keen to have a fairly classic interior, and even the exterior is a modern interpretation of a classic,” says Freivokh. “At one point, we considered a contemporary style like Black Pearl, but the owner resisted that in favour of something more traditional, so it stands as a four-masted schooner.”

The four masts tower 70-metres above the water, carrying furling staysails on Hoyt booms with a total sail area 5080sqm. If built, the boat will also have a diesel-electric propulsion system for a maximum range under power of 5,900 nautical miles. A two-deck atrium with a spiral staircase is twinned with an owner’s duplex apartment spread across two decks. The “convertible conservatory” links the owner’s living quarters with the main lobby via a glass winter garden that opens to the elements. More glass features in the double-height glass swimming pool on the aft deck, with a bottom that rises to serve as a dance floor or helipad. Like motoryachts its size, Dream Symphony was designed with a spa, treatment rooms and gym. 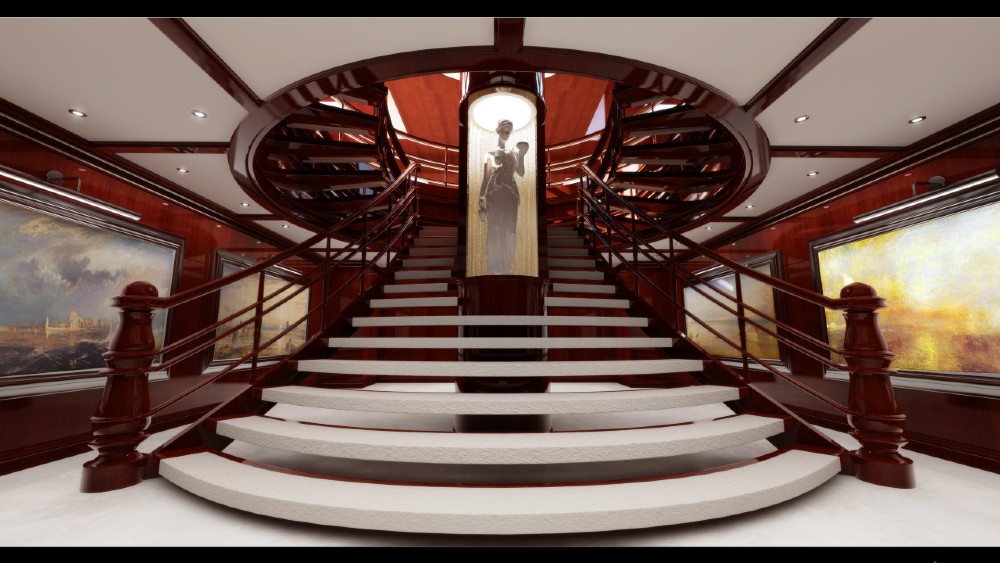 The interior is designed to be classic, rather than contemporary, using mahogany throughout. Courtesy Ken Freivokh

Freivokh is now working on two other wooden superyachts currently in build at Dream Ship Victory, and is finalising a 74-metre vessel for Turquoise, another Turkish yard. “Owners who want to build in wood still remain in the minority, but it’s highly personal and some just love the passion of associated with beautiful old classics,” says the designer.

Perhaps. But the new owner has to be willing to take on a much larger technical challenge to claim the title of world’s largest sailboat.