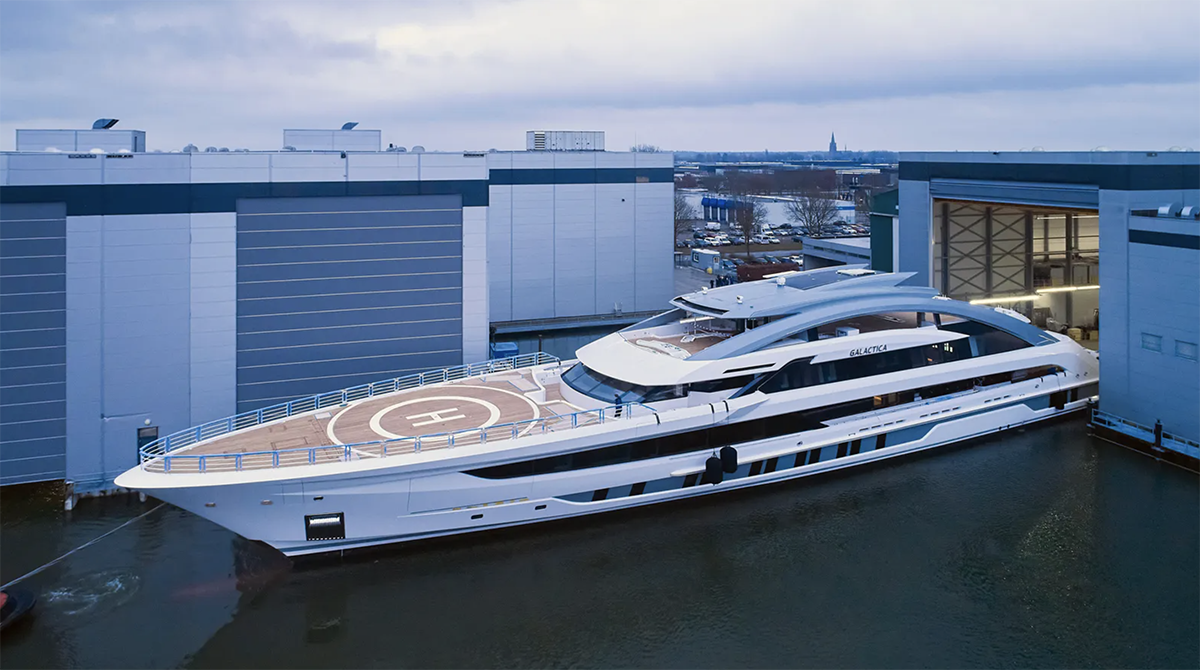 Inside The World’s Largest All-Aluminium Superyacht

Heesen’s behemoth has a high-tech “backbone” running its length to provide rigidity.

What has an aluminium-plate backbone, more than one head, and runs faster than Usain Bolt? Heesen’s superyacht Galactica—or “Project Cosmos,” as it was formerly called by the yard. The largest boat built by the Dutch shipyard to date is getting ready for its spring debutante ball. Fast, sporty and 262 feet long, the owner refers to Galactica as his “ultimate superyacht.”

Hundreds of yachts around the world are larger than Galactica. None of them are built entirely out of aluminium. For the owner who likes to make a statement with his custom new builds, Galactica had to be his largest and fastest one yet. The owner decided he wanted a 30-knot top speed—greased lightning for a yacht this size and a conundrum for the shipyard.

An 80-metre steel-hulled boat with conventional propulsion wouldn’t be able to reach that 30-knot mark. But an all-aluminium boat might, though that metal doesn’t provide the type of structural support that heavier steel does. Such a yacht had never been built, even by an aluminium specialist like Heesen. It would take serious creative engineering. 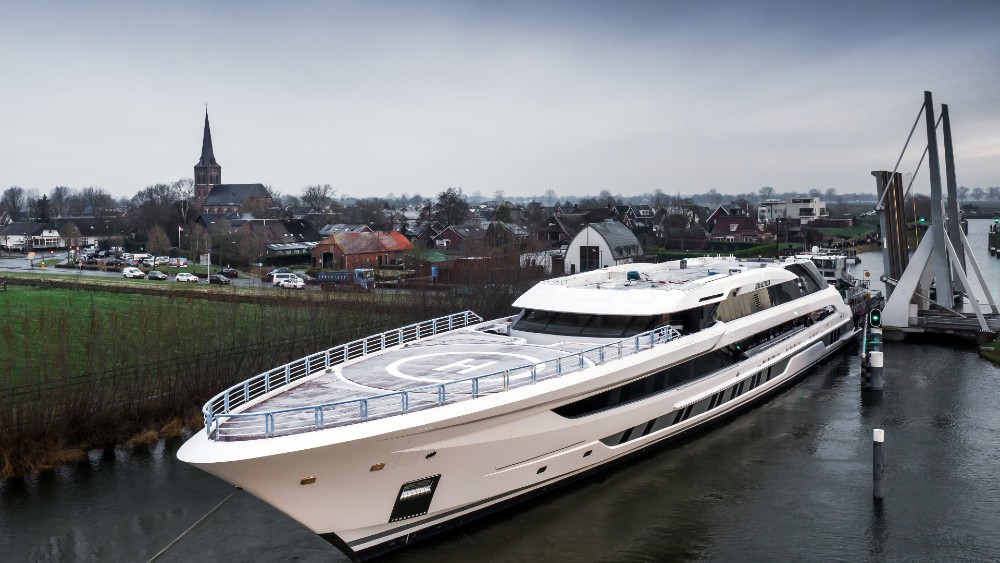 The owner has history when it comes to these types of requests. His previous two yachts, Galactica Star and Galactica Super Nova are both all aluminium with top speeds nearing 30 knots. At 70-metres in length, the latter was Heesen’s largest-ever build when delivered in 2016. Galactica is 9-metres and while that doesn’t sound like much in the scheme of things, the technical ingenuity required to make it work had Heesen’s top engineers scratching their heads. The answer lay outside the boating industry, in the construction industry’s I-beam.

“Everyone knows the I-beam where you have the material on the outer veins of your structure,” Peter van der Zanden, Heesen’s general manager of design, development and engineering, told Robb Report. “That’s where our inspiration for the backbone came from, where we have the majority of materials in the bottom of the boat and on the main deck—our ‘outer veins’.”

The name “backbone” suggests a spine or something with flex, but the patented box-shaped structure is anything but. Composed of 15-mm aluminium plate, it’s lightweight and strong, running almost the full length of the yacht.

Glass was a main priority for the owner’s third boat in the Galactica series. Courtesy Heesen

“We knew the design would work, our only concern was if it would work well enough,” says Van der Zanden.

Heesen created a scale model of the boat in water, divided into four segments, and simulated the pressures and forces at sea. When the results exceeded the requirements set out by Lloyd’s, the yard patented the design.

Of course, there’s more to Galactica than its hidden backbone. Key defining features of the Winch Design exterior include large sweeping panes of glass that trace the arching line of the superstructure. A bow helipad doubles as a cinema with seating and a screen that folds away into the deck. The glass-bottomed pool on the main deck reflects sun rays on the beach club below. Increasing the amount of light—both natural and artificial—throughout the boat was a chief request in this latest version of Galactica. 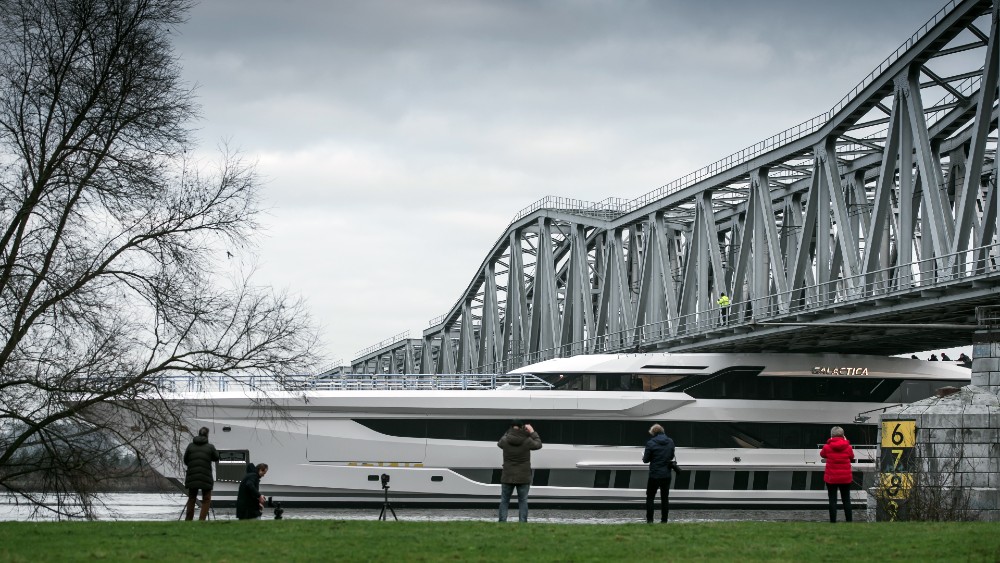 On its journey from the Oss shipyard to North Sea sea trials, the clearance between the top deck and some bridges was less than six inches. Courtesy Heesen

“The owner’s previous experience has certainly influenced the way Galactica looks,” James Russell, exterior designer at Winch, told Robb Report. “It takes time to learn what you love, and particular focus has been paid to areas where more time will be spent, such as the beach club.”

Inside, an interior by Sinot Yacht Design & Architecture includes a central glass elevator, brushed oak and marble finishes, and in the main deck lounge, hand-cut glass ceilings. Galactica’s windows incline at 45 degrees, rather than the standard 90 degrees, to give the illusion that the panes of glass are larger than they are.

Glass is a recurring theme, from the glass detailing in the straw marquetry and stainless-steel wall located in the main deck lounge, to the drinks display cabinet on the bridge deck with bespoke-sized backlit glass cubes sized to fit individual bottles. But glass is heavy. For the yacht to be fast, it needs to be light. 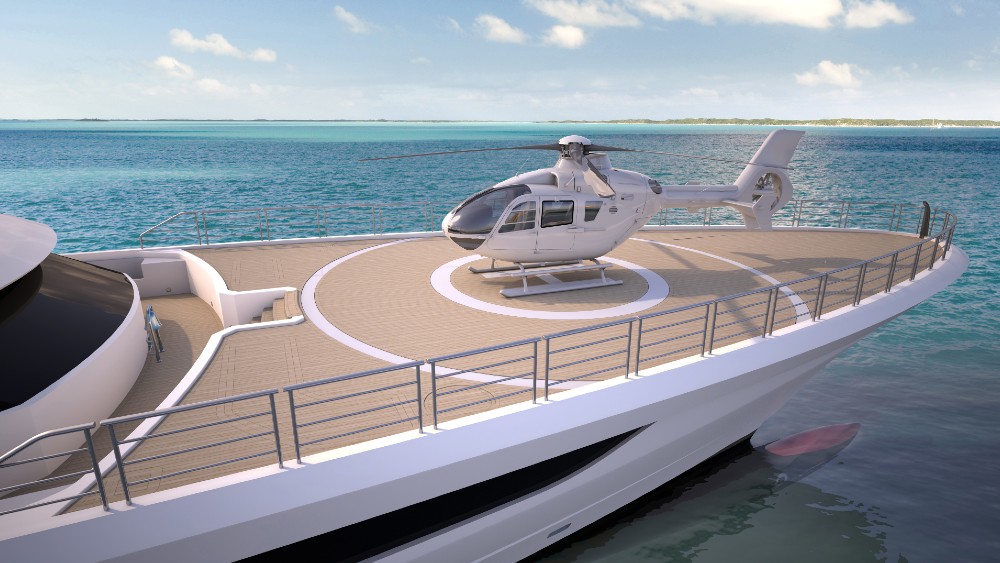 The helipad converts into an open-air cinema, with a screen that rises from the deck. Courtesy Heesen

On a yacht of Galactica’s size, everything is large, from the four MTU V20 engines (12 tons each) and the two gearboxes (13 tons each), to the air-intakes and the fuel tanks. But everything was made as lightweight as possible. The boat totals only 1,700 gross tons. The owner’s 30 knots will come from the MTUs’ 19,320 horsepower as well as the variable-pitch propellers.

Nothing has come easy with this yacht build. Its January journey from Heesen’s shipyard in Oss to the port of Harlingen where the boat is undergoing final testing in the North Sea was a game of inches. It passed through villages and squeezed beneath canal bridges with less than half a foot to spare, a hair-raising exercise for an undelivered superyacht. It will be turned over to its owner in April.