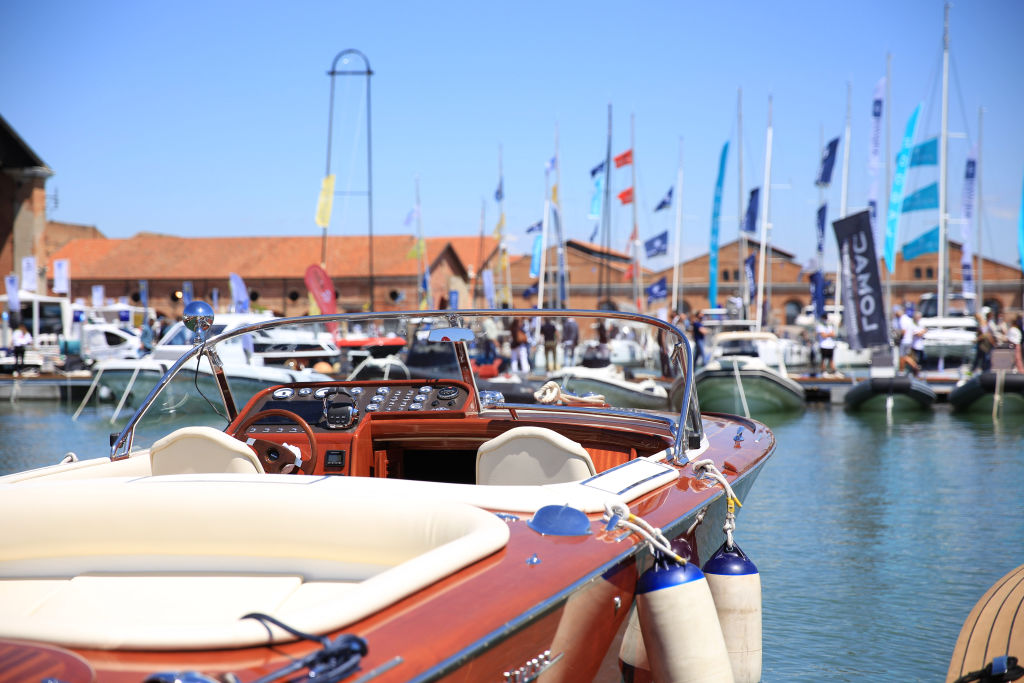 What better setting than Venice for a boat show?

Venice and boats in the same sentence tend to convey images of gondolas, narrow channels and the Grand Canal. This week, as the second edition of the Salone Nautico of Venice wraps up, was all about modern yachts and sailing vessels—more than 220 from over 160 exhibitors, lining the channels of Venice’s Arsenale.

Robb Report attended opening day of the event—which included aerial acrobatics by six jets in the Frecce Tricolori, the Italian Air Force’s equivalent of the Blue Angels, along with visits by the country’s leading politicians. And, of course, masked crowds just happy to be at a live boat show. Amongst all this activity were yachts actually worthy of being in such a beautiful, historic setting. Here are our five favourites.

This new 30-metre flagship lived up to the pre-show hype, with an interior that’s massive compared to other yachts its length. Its unusual spaces include a 430-sq. ft. stern area designed for water access, a 110-sq. ft. galley with a chef’s kitchen, main salon with full-height windows, and an expansive 600-sq. ft. flybridge. Architect Filippo Salvetti did a masterful job on the exterior, creating social areas in every sector, including using every possible inch of the bow for lounges and tables. Salvetti’s “flow” design enhances freedom of movement across the 1000, with different stairways to the flybridge and passages along the sides to the bow. The twin 2217-mhp MTU engines deliver a top speed of 28 knots. The main suite has its own entrance in the front, along with a full-beam ensuite and social area. Four twin staterooms are on the lower deck. The 1000, which will serve as a template for future designs, also has staterooms for five crew. 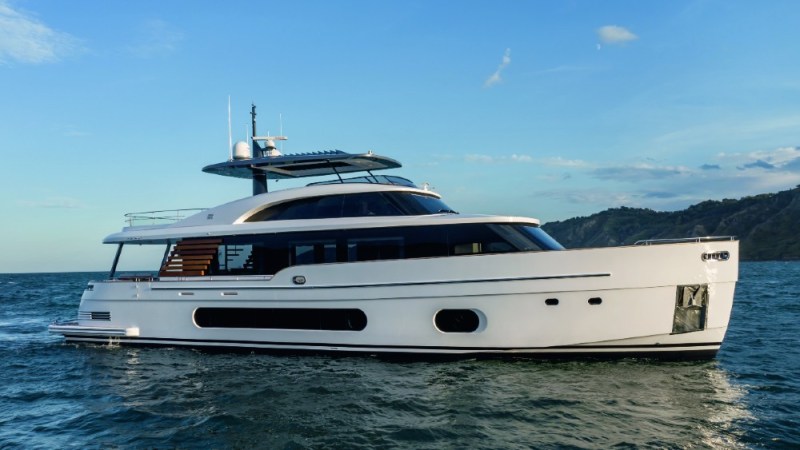 The comeback kid of Azimut’s famed Magellano series represents the next generation of this long-distance cruising line. Ken Freivokh designed the first Magellano 50 eleven years ago, and while retaining the flow of its lines, he has created a much more stylish rendition of the yacht. Architect Vincenzo De Cotiis’s interior is much brighter and more open than the original Magellano series, employing large windows, circular shapes and contrasting materials for a contemporary design. Features like a moving glass wall allow for an oceanside terrace to be open or closed, while also serving as a swim platform. Fed by lithium battery packs, the boat’s “Hotel Mode” allows six hours of non-engine use of on-board house systems during the day and eight hours at night. Following the public launch of the 25-metre Magellano in Venice will come the larger 30-metret 30 Metri that will debut next year.

Monaco builder Wally routinely comes up with yacht designs—both superyachts and tenders—that are years ahead of the market. Its new outboard-powered 43-footer is no exception, with features like an angular hull, open stern and fill-in bow. The topside is built of carbon fibre to keep the weight light, and the modular design allows multiple configurations—especially with the fold-down sides at the transom. The cabin is small, but usable on day trips with its enclosed head. Triple 300 hp Mercury Verado outboards are standard, with the upgrade 450 hp Verados delivering a top speed of 50 knots. I saw the first 43 Wallytender X at the Palm Beach show. The model in Venice was virtually identical, but had solar panels in the hardtop for using house systems. The design may look similar to other Italian dayboats on the water, but rest assured that Wally came up with the concept years before anybody else thought it could have a following.

Rigid-hulled inflatables are more than just utilitarian craft in Italy. For many owners they’re a fashion statement on the water, and nobody makes them more stylishly than Tecnorib. The RIB maker and designer had two versions of its 10-metre at Venice: One was a twin outboard-version with an open cockpit, with dining table and hardtop; the other was an inboard version with a massive sunbed, stylish protective windshield and large social area in front. Both craft have tire treads from Formula One partner Pirelli on the gunwales that kind of work as stylish hood ornaments, but along the sides. The two boat styles have very different homes—the outboard version is ideal for sunny climates like South Florida or Australia, while the designer inboard model has the Med written all over it.

This 7-metre vessel may have the smallest length in this group, but it was far and above the most elegant dayboat at the show. Dario Messina—who has been part of the yachting industry for years but only recently started building his own boats—collaborated with yacht designer IdeaeITALIA on the 24’s delicate lines. They include the gentle slope in the teak foredeck, the soft flow of the tinted windshield, and the way the stern creates a large sunpad and step swim platform. There are many, many dayboats this size, but the way its curves work make it unique among its peers. Besides the large open cockpit, the 24 has an unusually large cabin, with an enclosed head, and teak floor. With its upgraded 300 hp Volvo Penta diesel, the 24 reaches a top end of 32 knots, and has a cruising speed of 25 knots. The boat comes in a standard GT version, though the high-end Deluxe model was at Venice. It also comes in a Limo style, with a carved-out in the bow to carry more passengers. The 24 would’ve been lost among the larger yachts at the Venice show, but sitting up on a stand along the docks, it gained instant fans who could see its graceful hull out of the water.