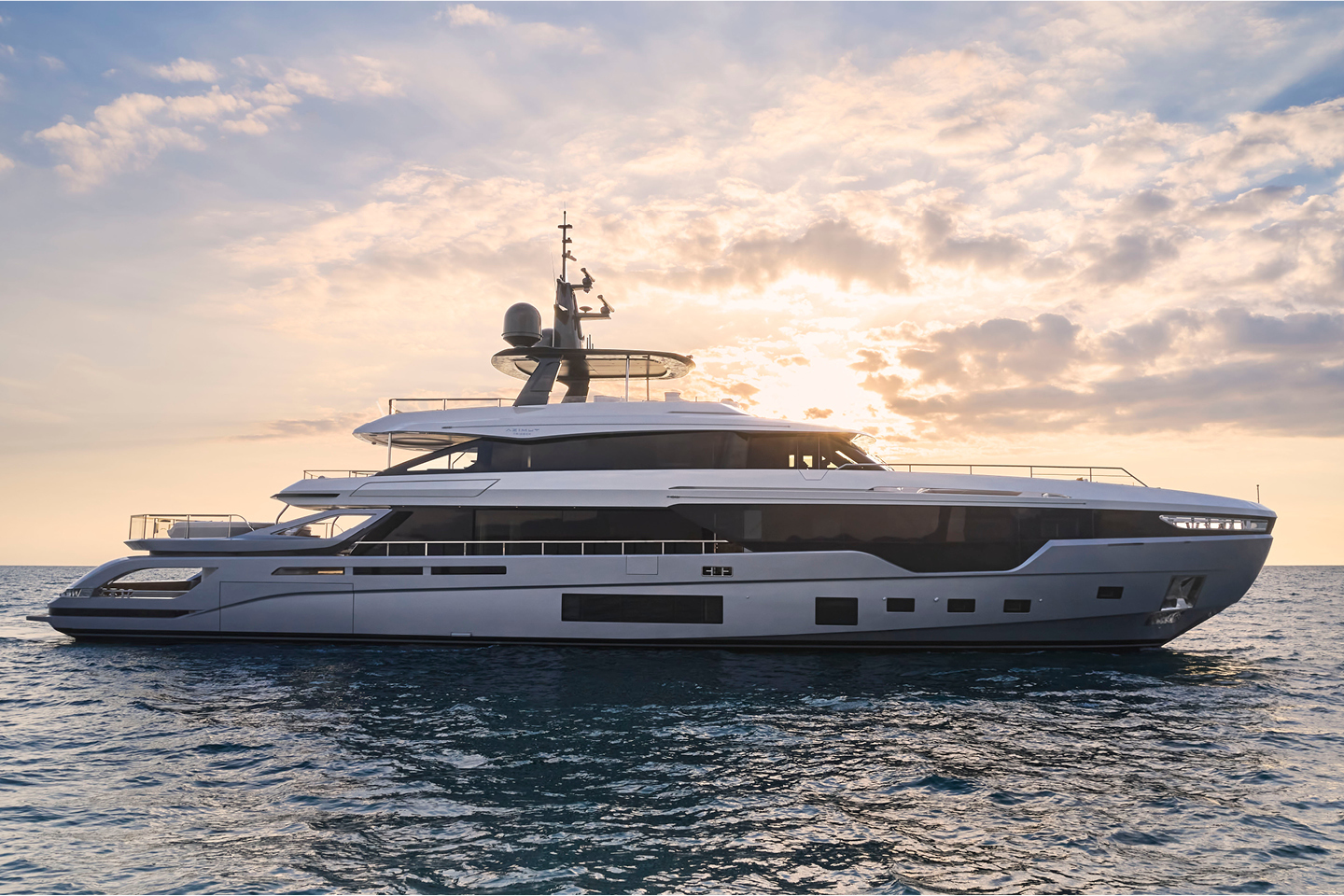 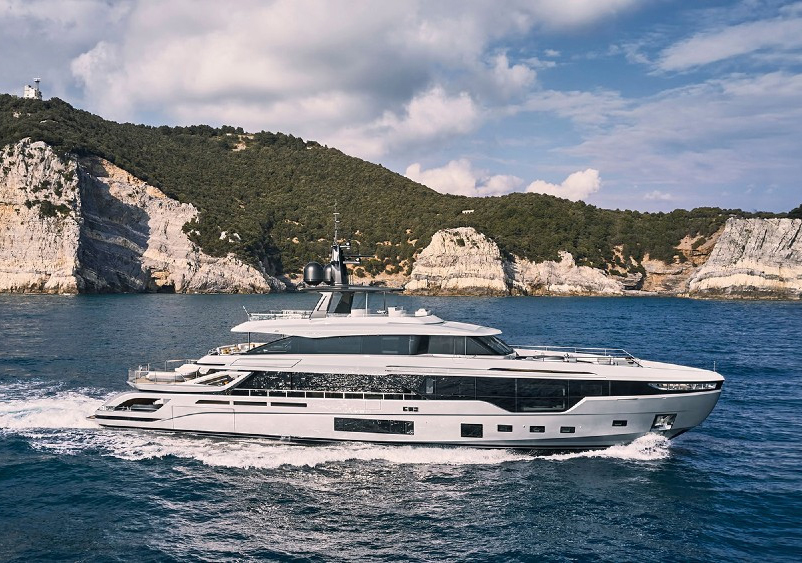 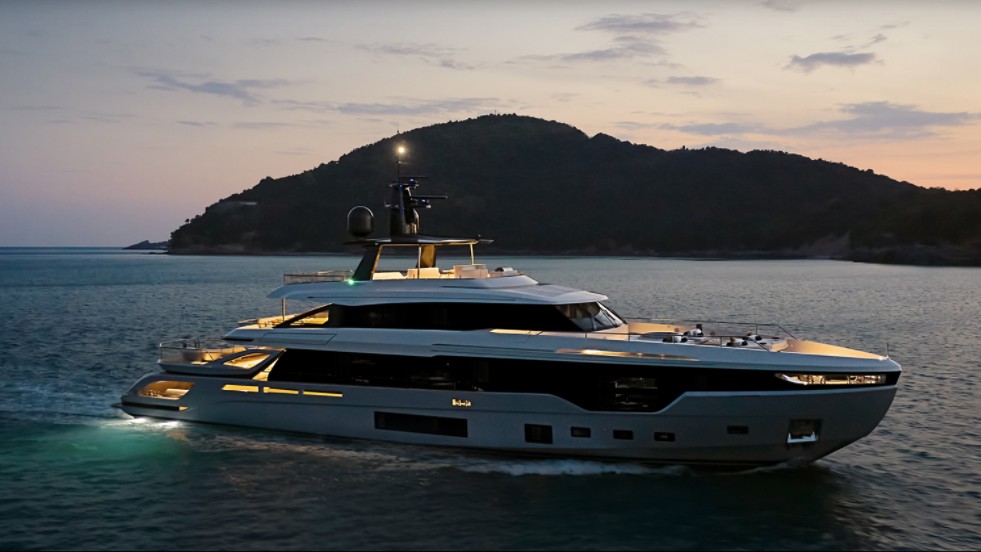 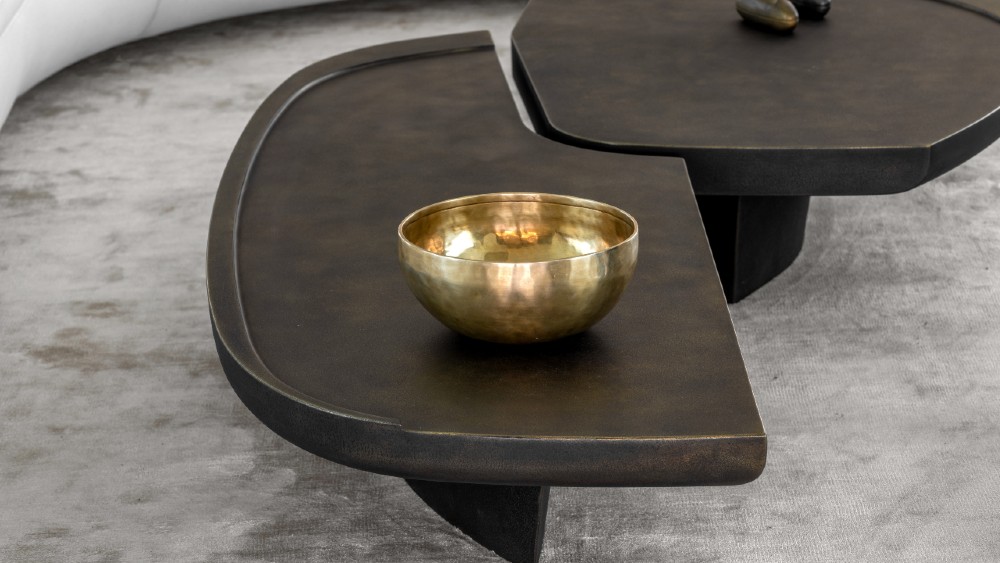 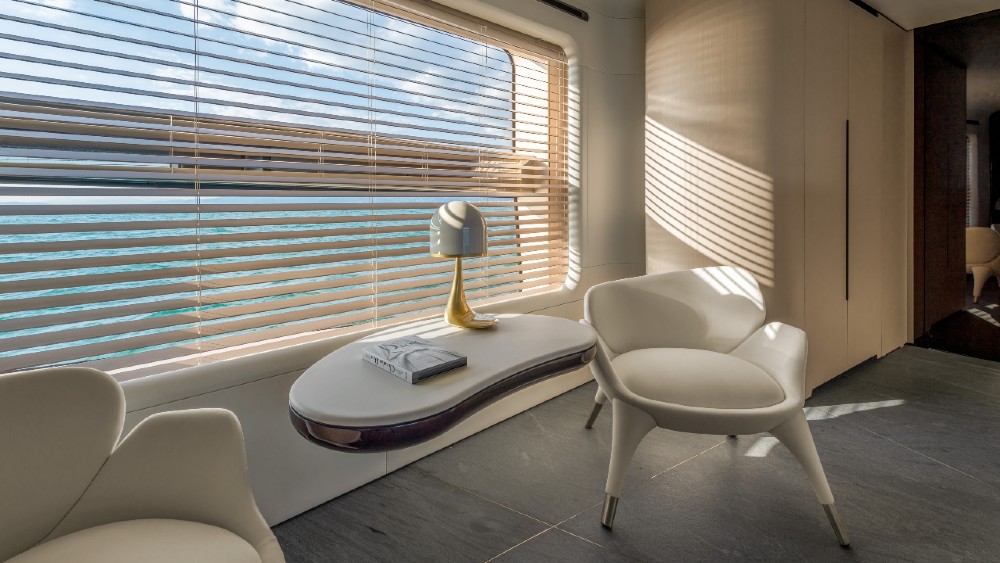 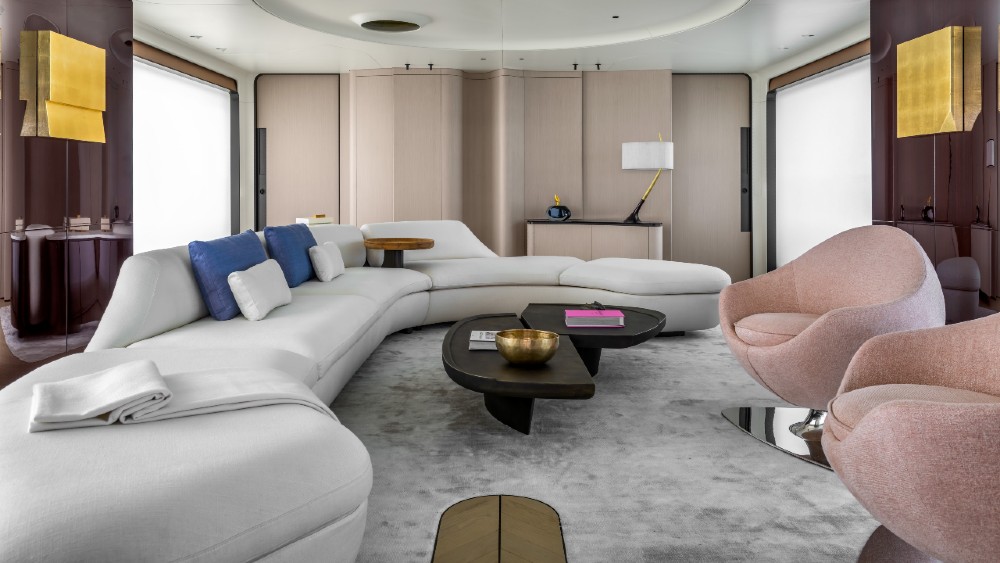 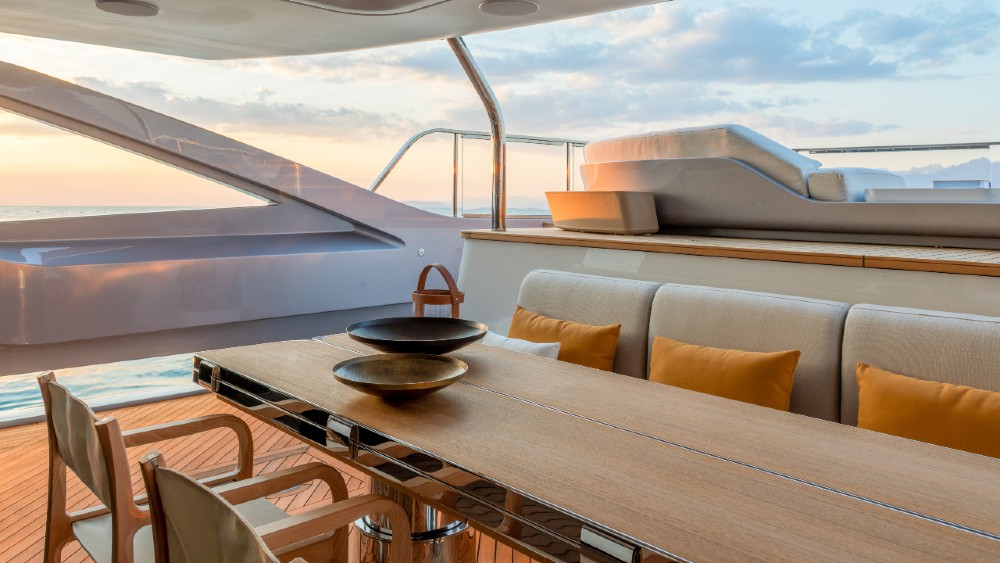 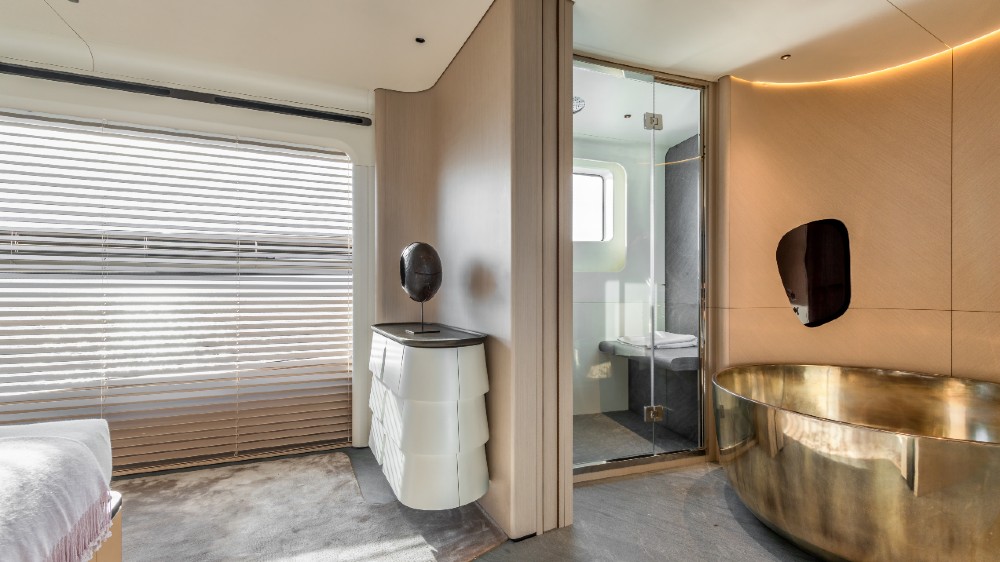 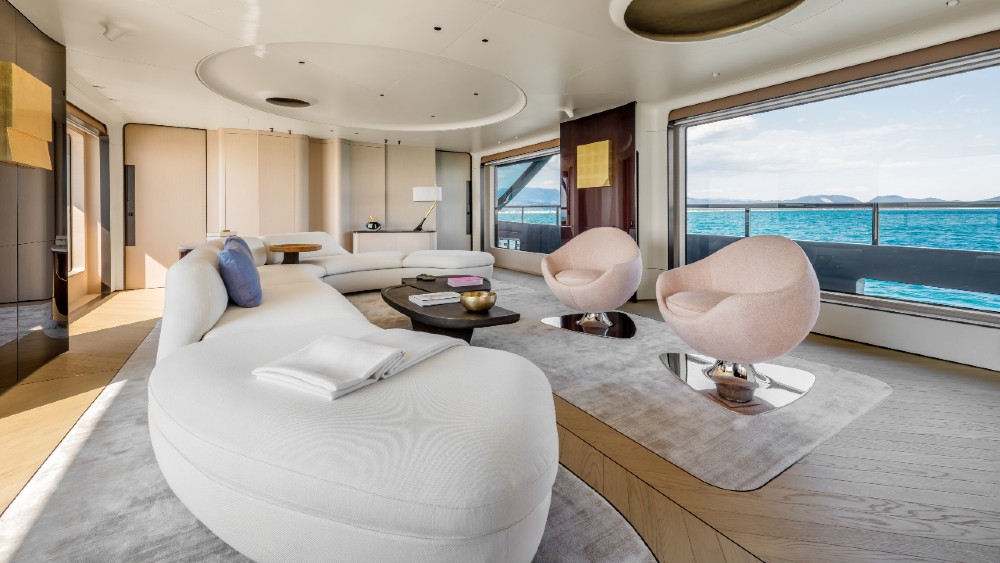 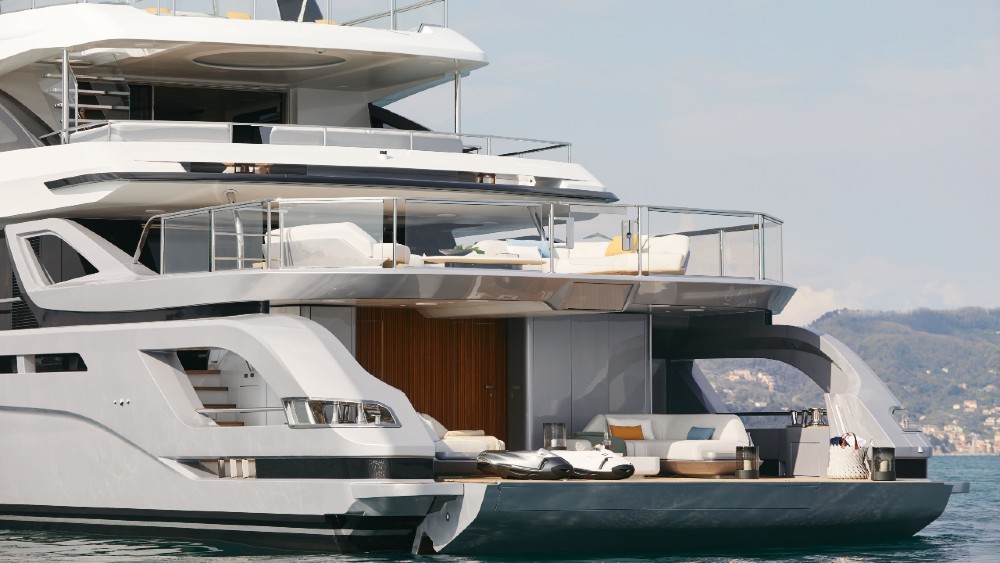 A focus on light, curves and custom decor.

One of the big premieres at this week’s Cannes Yachting Festival is Azimut’s new 38-metre Grande Trideck. Robb Report had a chance to do an extended sea trial on the new flagship, several weeks before the show, so we got a first look at what the new Trideck is all about.

Just over 38-metres in length, it’s Azimut’s largest-ever yacht, and with its triple decks and high volume, it pushes the Italian brand deeper into superyacht territory. The Trideck is the result of a dream-team collaboration between the shipyard, Alberto Mancini for the exterior, Achille Salvagni for the interior design, and Pierluigi Ausonio for the naval architecture.

“When Azimut asked me to design their flagship, I sketched a nice-looking yacht, but it wasn’t enough,” designer Mancini told Robb Report. “So together with my design team we decided to focus our energies on the layout, and give it a cascading terrace effect, starting from the sun deck down to the sea.” 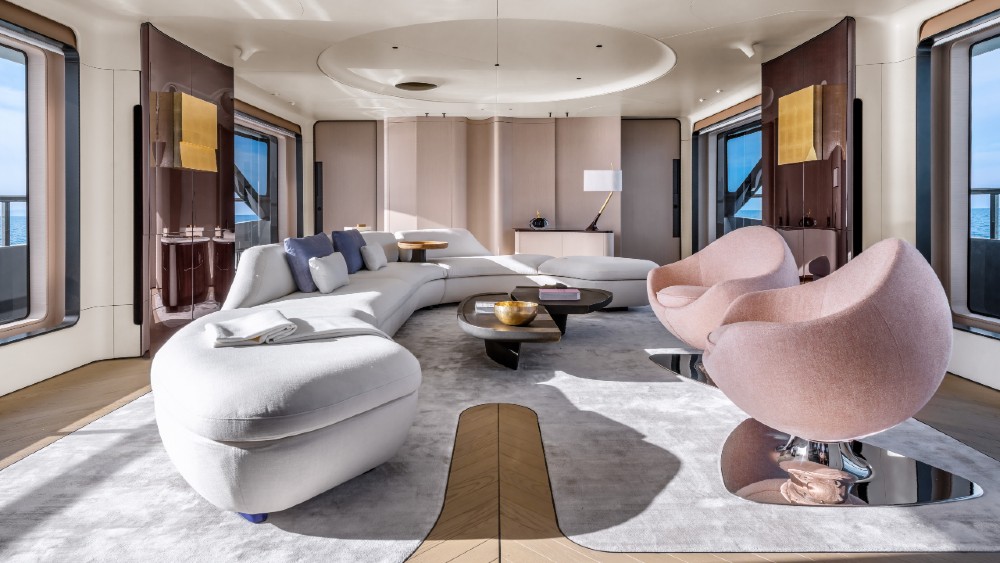 The interior uses custom decor, including the ceiling and lighting fixtures, to create a soft cocoon-like environment. Courtesy Azimut Yachts

The raised aft platform is a feature that Mancini first introduced on the Azimut S10. Functioning as a sea-view terrace complete with aft-facing sofa and glass bulwarks, its elevated position also increases the ceiling height in the semi-open beach club on the deck below. No need to clear out the tenders and toys because there’s a side-loading garage between the beach club and engine room. Voids in the bulwarks mean guests don’t feel hemmed in by the hull.

As you’d expect on a yacht designed for open-air living, there’s yet more alfresco space on the upper deck and sun deck, not to mention the sunpads and hot tub on the foredeck.

The interior design is by Achille Salvagni whose work manages to be both simple and sophisticated, characterized by graceful curves and organic shapes. The Rome-based designer has earned a reputation for his discreet and timeless style, as well as fierce attention to detail. 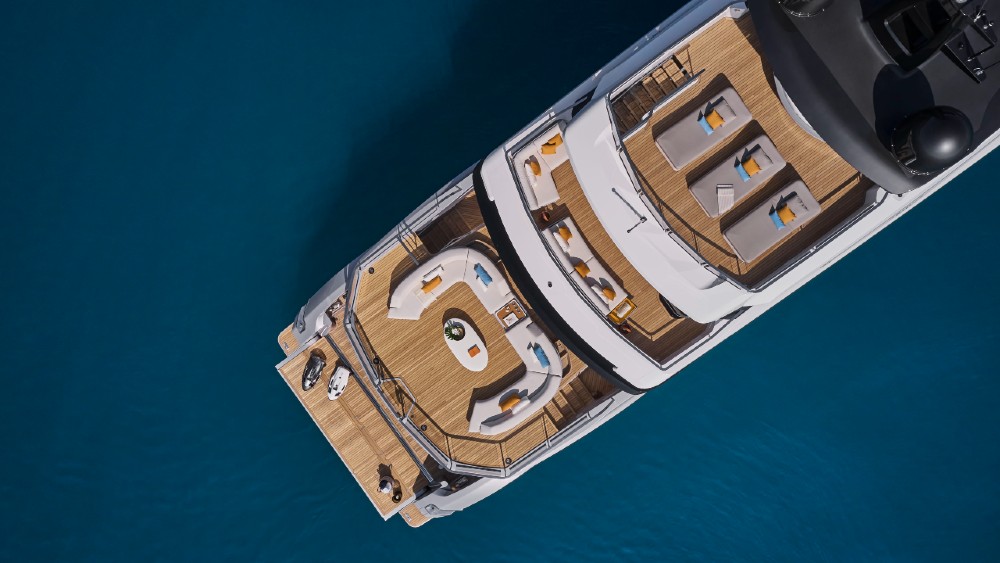 The cascading effect of the decks connects the exterior but provides multiple private experiences for the owners and guests. Courtesy Azimut Yachts

Most clients come to him with ideas based on interiors they have seen before, but he has little interest in reproducing the work of others. “It’s easy to produce a tasteful interior design based on what the market already has to offer,” he says. “It’s much more difficult to produce something fresh and different, but ultimately the creative process is more stimulating and rewarding for the client.”

In the case of the first Grande Trideck, he was helped by the fact that the owner chose to have just one exterior dining table on the upper deck—a refreshing break from convention as formal dining spaces inside tend to get little use. That freed up space in the main salon for bespoke, freestanding furniture pieces, including a long sofa shaped like a question mark extending the length of the room.

There are six guest cabins, with the full-beam master stateroom on the main deck forward, four cabins on the lower deck, and a VIP suite on the upper deck behind the wheelhouse. 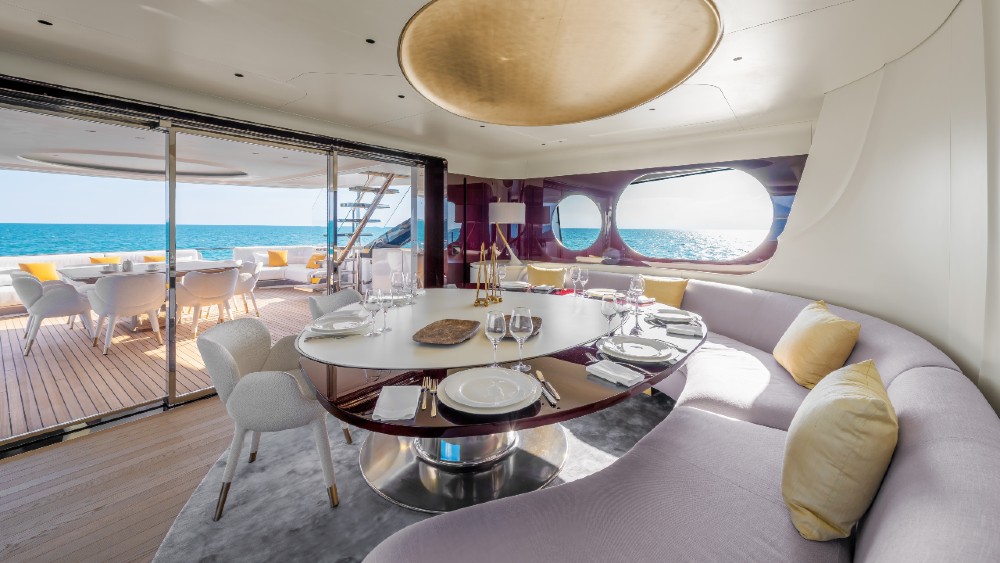 The lounge on the upper deck doubles for dining, leaving space free in the lower salon where a formal dining area would’ve been. Courtesy Azimut Yachts

Azimut prides itself on its use of innovative technology. The Grande Trideck is based on what it calls a D2P (Displacement to Planing) hull configuration that first appeared on the Grande 35 and has been further developed for the new flagship. Based on a double-chine hull with a wave piercer, it combines the comfort and fuel efficiency of a displacement hull with the performance of a planing hull without the need for particularly powerful engines.

“The D2P is not only more efficient, but provides gains in comfort and seakeeping too,” says Alessandro Rossi, chief technical officer at Azimut-Benetti. “The wave piercer reduces vertical accelerations and the skeg improves route stability in following or quartering seas.”

Like other Azimut models, the Trideck uses carbon fibre for the superstructure to keep both the centre of gravity low and weight down. Powered by twin 2,600 hp MTU engines, the 125-footer has a top speed of 24 knots and a cruising speed of 21 knots; the builder is also offering the option of smaller 2,400 hp engines that deliver about 1 knot less. 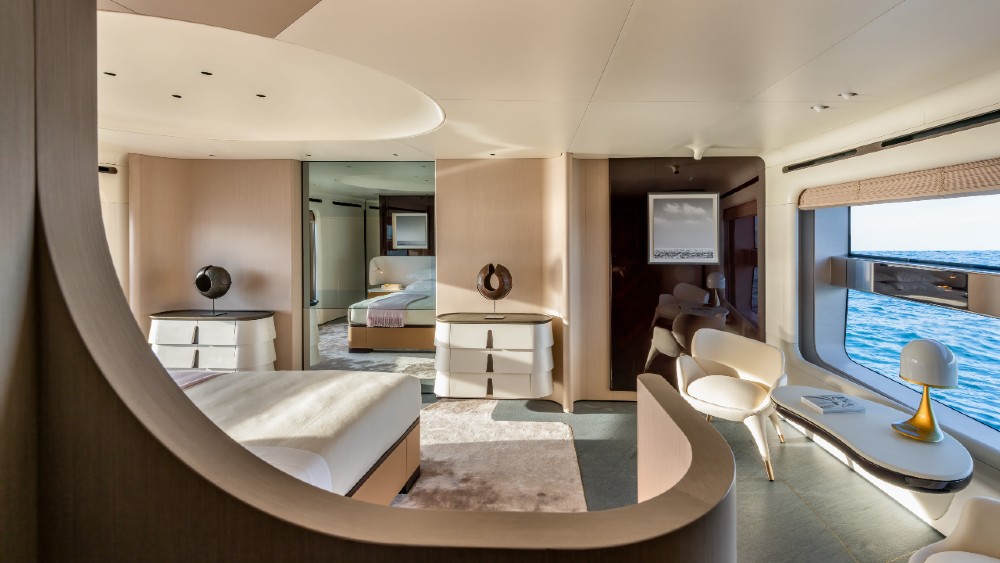 The custom design extends from the furniture and dressers all the way to ceiling and embedded lights. Courtesy Azimut Yachts

Motion comfort under way and at anchor is provided by CMC electric stabilizers. The Trideck also has CMC’s Argo system that draws on data from motion sensors to ensure the steering and stabilizers work in unison, instead of fighting each other, to enhance stability and reduce the risk of broaching.

There’s always an element of risk associated with the launch of a new flagship. Will it take off and capture the imagination of the marketplace? The Azimut 38 Trideck certainly seems to have struck a chord with Azimut owners so it’s little surprise that multiple units have already been sold.