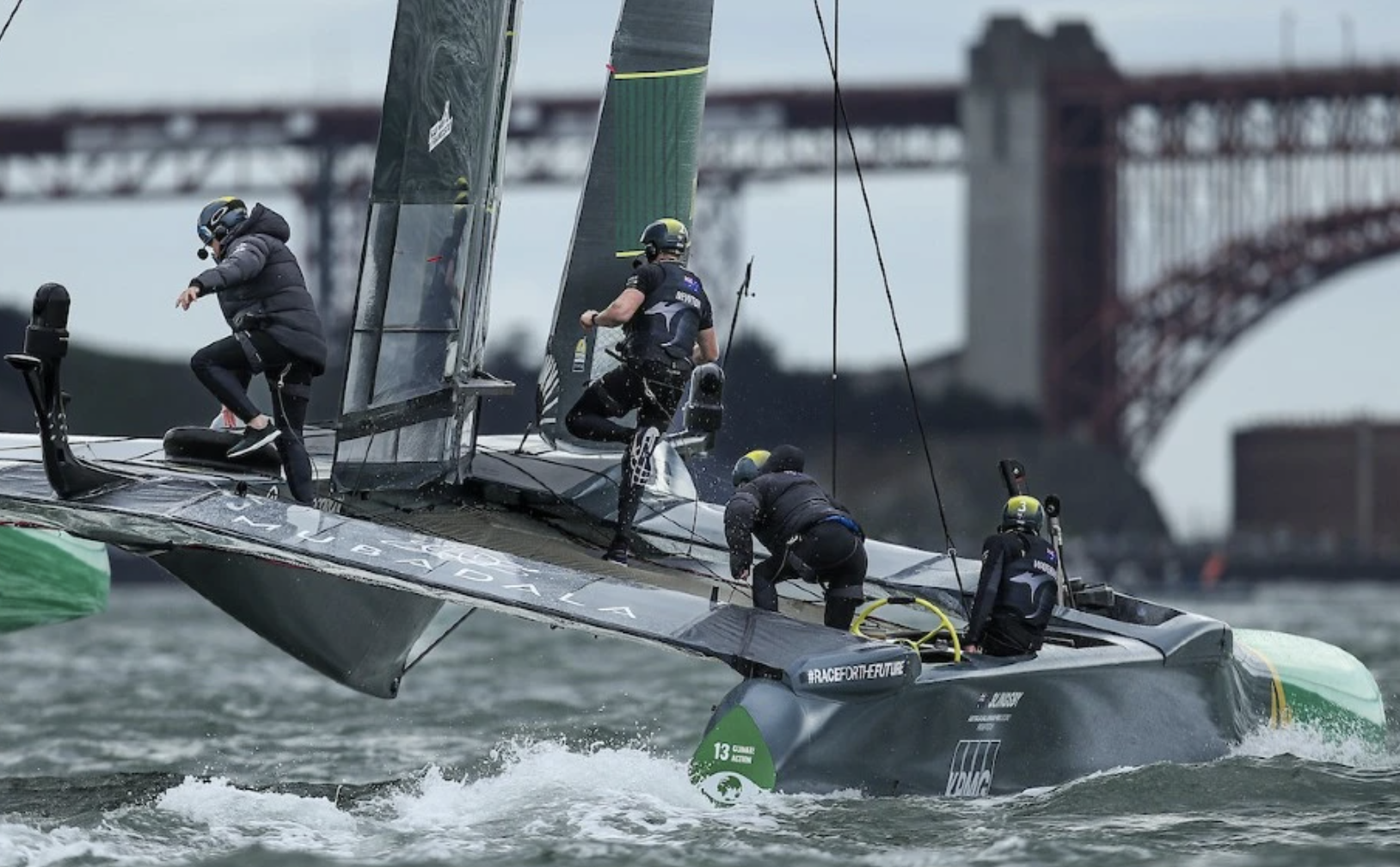 Tom Slingsby skippered the Aussies to SailGP glory once again.

SailGP, the extreme Formula One version of yacht racing, ended its second season yesterday, with the Australian team claiming the championship over teams from Japan and the USA. The final weekend of the series involved multiple collisions, challenging winds and even a whale on the racecourse that forced a restart to the championship final race.

SailGP uses 15-metre foiling F50 raceboats that can reach speeds of 100km/h. Add in the boats’ pinpoint turning abilities, athleticism of the five racers who have to leap across the boat at 80-plus-km/h, white-knuckle race maneuvers and crashes, and the sport has attracted gatherings of thousands of spectators during its 10-race series around the world.

The SailGP series was set up as an alternative to the much slower sport of monohull racing, modeled after other professional franchise sports like the NFL and MLB with dedicated teams from different countries. 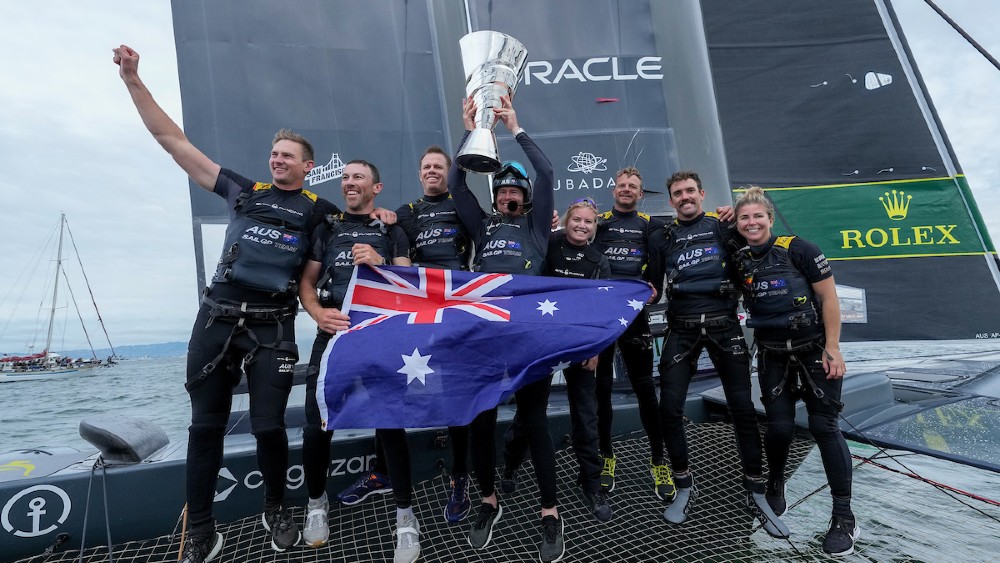 In the winner-take-all season finale, the Aussies emerged victorious over teams from Japan and the USA. Courtesy SailGP

Despite the teams accruing points all season, last weekend’s series was a winner-take-all event.

After two days of racing, Tom Slingsby’s Australia SailGP was victorious. The lead up to the final race was defined by two dramatic collisions: Rookie Spanish driver Jordi Xammar crashed into the stern of the US team’s catamaran and tore a hole in it. That forced the US team to attempt frantic, on-water repairs before the Grand Final. In another race, the teams from France and New Zealand also collided. 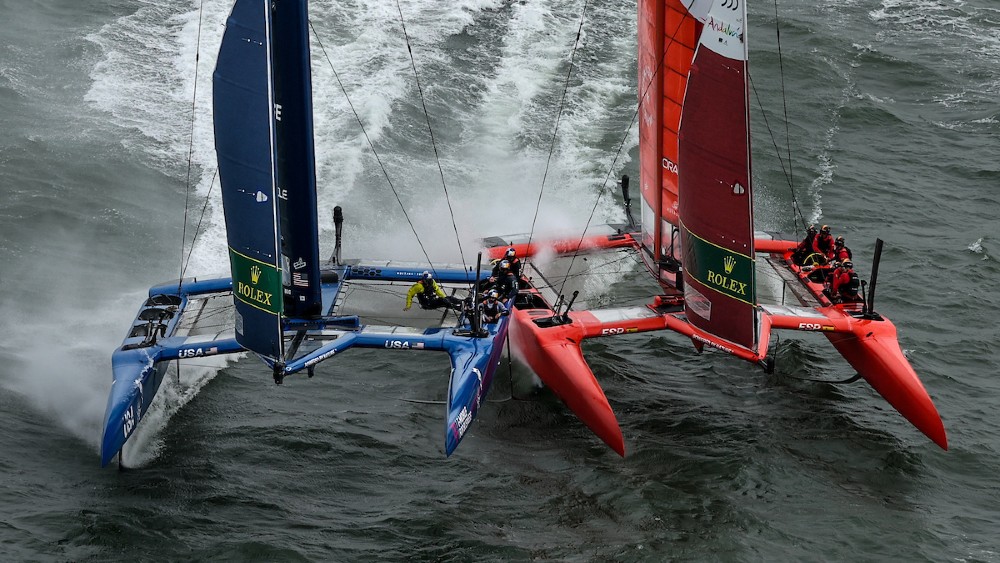 In the final race, the US team took an early lead, but the race was abandoned after a whale was sighted on the course. In the restart, Australia took the lead and dominated throughout. The team claimed a US$1 million prize for the season. “More important than the money is that Australia came out on top and we can call ourselves the best in the world,” said Slingsby after the race. “Money comes and goes and glory lasts forever, I know that’s a saying, but we really feel it right now.”

Jimmy Spithill, leader of the US team, was disappointed but gracious. “At the end of the day you really have to credit the Aussies. They have been the benchmark team all season and to come back and do it back to back. It’s very impressive, they deserve the win,” he said in the post-event press conference.

Part of SailGP’s mission is to promote ocean protection—hence, restarting the race when the whale appeared—and sustainability. An important, secondary contest that took place during the season was the Impact League, which measured sustainability efforts by each team, from the carbon footprint of their boats, to how they travel to events, to measuring use of plastic. 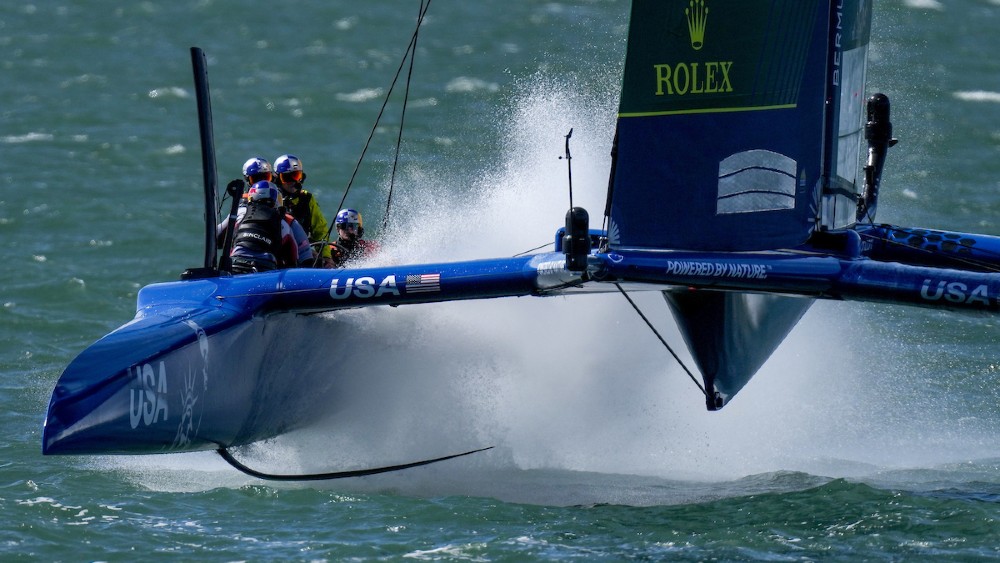 New Zealand’s team claimed the Impact League title, handing over the US$100,000 prize to the Live Ocean foundation. Great Britain and Australia won $35,000 and $15,000 respectively for second and third place, and donated the money to their Race to the Future partners.

Season three of SailGP will begin in Bermuda on May 14 and 15. Ten teams, including newcomers Switzerland and Canada, will take part in the third season. Events in Chicago, Plymouth, Copenhagen, Saint-Tropez, Cádiz-Andalucía, Dubai, Christchurch have been scheduled, with the final happening again in San Francisco.