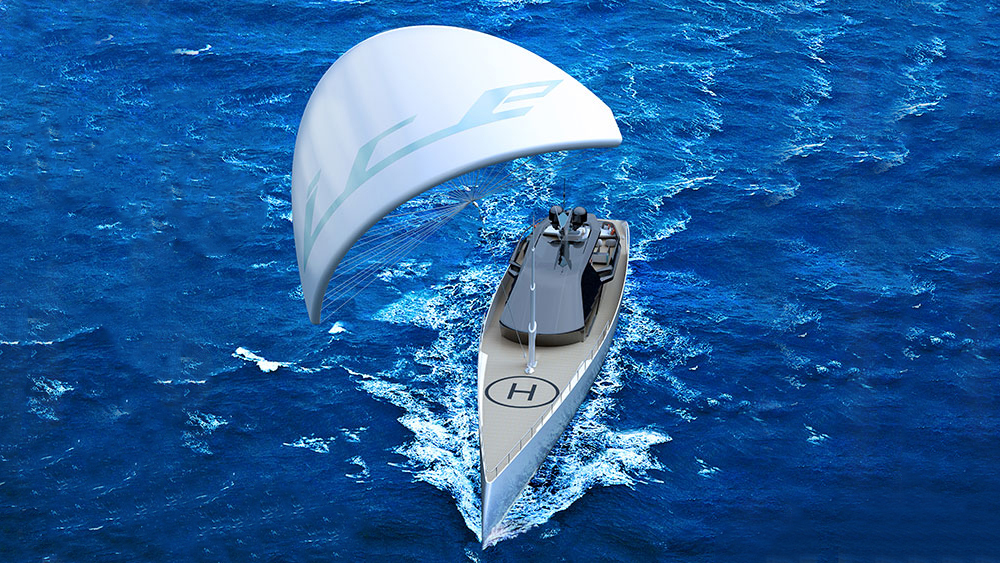 A Giant Kite Sails 180 Metres Above This Futuristic Superyacht

The enormous sail helps propel the 64-metre superyacht through the ocean, creating much greater fuel efficiency.

Turns out kites can offer more than just fun at the beach.

Meet Project ICE, a 64-metre motoryacht collaboration between Red Yacht Design and Dykstra Naval Architects that uses a giant overhead sail to lift it into a category of its own. Imagine supersizing a kite sail to 158 square metres and then flying it 182-metres above the yacht. Beyond the dramatic sci-fi look, the yacht becomes much more fuel-efficient since the sail helps propel it through the water.

Both partners have had a long history of innovative designs. Dykstra has created the naval architecture for sailing yachts like Project Lotus and Sea Eagle II, while Istanbul-based Red Yacht has designed multiple superyachts, as well as fun projects like Stella and the Superfly GTO 42.

A kite-sailing superyacht is more than just a theory, according to Fatih Sürekli, cofounder at Red Yacht Design, whose team created ICE’s interior and exterior designs. “German kite manufacturer SkySails has been integrating this technology on commercial ships for many years to reduce fuel consumption,” Sürekli told Robb Report. “We started with the notion that it would also work on a yacht created for circumnavigation. It will almost exclusively be used on the high seas—there is plenty of open water and no helicopters flying by.”

Netherlands-based Dykstra, which worked with SkySails on the geometry of the kite, also designed a low-resistance hull and dagger-board for ICE as part of the total package to make it operational. ICE also has an uber-efficient hybrid propulsion system for non-sailing days. The German owner plans to put the yacht in a fractional program so she can be used by multiple owners on her circumnavigations.

Beyond technical innovations, Red Yacht’s design brief called for shapes from the ocean. “We wanted her to look like she always came from the sea,” Sürekli said. “The main inspiration came from sharks and dolphins. We wanted the superstructure and bow to convey a feeling of majesty, with the aggressive look of a shark. Aft, the areas are more welcoming, with a friendly, dolphin-like feeling.”

The yacht also has an unusually high percentage of glass for its size. “The main goal is to integrate enclosed spaces with more light while assuring a striking profile from the exterior,” Sürekli said.

The Kite Lounge is the best example of walls of glass used to maximum effect: Its spherical glass ceiling was designed as part of an interior observation area to watch the kite sailing overhead, while the lounge can also be converted to a dining area. The enormous glass area offers 180 degrees of visibility, with exceptional views of sky and water. Sürekli designed the main deck as one unbroken space that allows the eye to move freely from the main salon in the rear, up through the transparent Kite Lounge and then forward through the windows of the pilothouse.

The five-stateroom layout includes four guest cabins for 10 people and a full-beam master’s suite with office, his-and-hers dressing rooms, lounge and direct access to the spa—in fact, the owner can decide if he will be using the spa privately or if he will open it up to the guests.

ICE’s exterior also emphasizes open spaces—464 square metre worth, in fact—across the upper decks, stern and bow areas. Her superstructure is also unusual in that it will be built in carbon fibre (for weight savings), while the hull will be aluminium.

Such a radical mothership requires an equally radical shadow boat. The ICE Ghost is a 26-metre boat with a broad aft deck designed to carry just about every toy imaginable, including an Icon A5 Airplane, U Boatworx Superyacht Sub, a custom RIB with a top end of 60 knots (also designed by Red Yacht), personal watercraft, diving equipment and dozens of other toys.

The ICE Ghost is a 26-metre. shadow vessel that will hold the mothership’s toys, including a personal sub, aeroplane, RIB and diving equipment. Photo: Red Yacht Design

Cleared of the equipment, the expansive deck turns into an open party area for the owner and guests. The boat’s galley is located on the main deck for such occasions. The shadow vessel also has twin cabins for four guests or crew.

The owner is accepting bids from shipyards, so Project ICE could quickly move ahead from fantasy to reality.