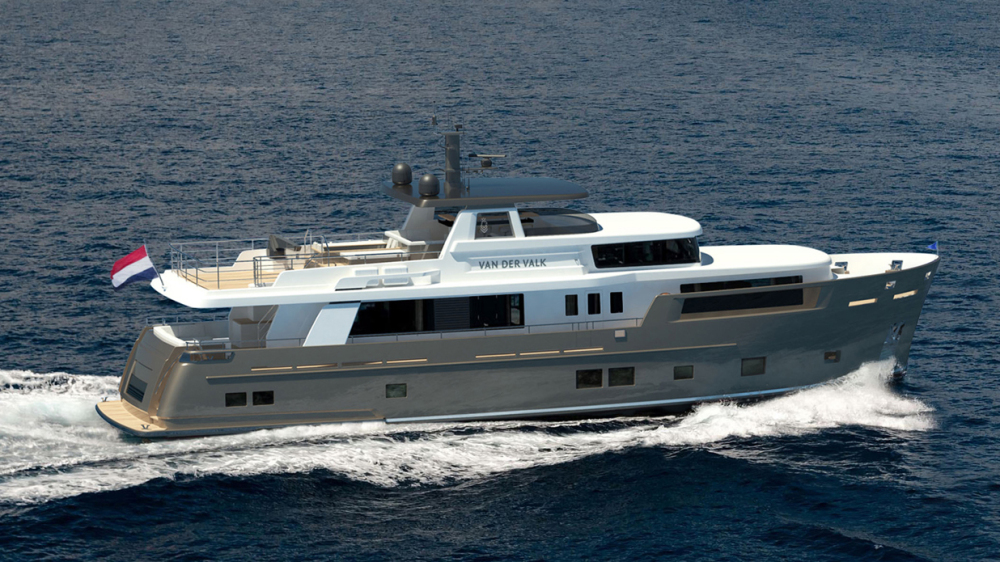 The Dutch shipyard’s new 92-foot raised-pilothouse explorer yacht is designed to travel the seven seas in a compact passage.

Explorer yachts under 100 feet have become the rage for owners who want a solid, seaworthy vessel to see the world, without the headaches of a large crew and other expenses that come with a larger superyacht.

During their first years on the market, many mini-explorers looked much more robust than they really were, jellyfish wearing shark skins.

Now that a number of custom shipyards have entered the expedition sector, mini-explorers can be built with ice-class hulls, redundant systems, and other hard-core cruising features that can be the difference between pleasure and disaster when one is really off the grid.

The 92-footer is actually the owners’ second Van der Valk, but their first explorer model. They plan to embark on months-long transatlantic and transpacific voyages. The yacht is built of aluminum, with a displacement hull powered by twin 1,650 hp MAN engines.

The Explorer will have a top speed of 20 knots and 17 knots at cruise speed, highly respectable speeds for an expedition yacht. The boat will also have a VEEM VG145 zero-speed gyroscopic stabilizer for onboard comfort and two 32 kW Northern Lights generators for power, two great options that deliver comfort no matter where the yacht explores.

The five-stateroom interior features a forward master suite on the main deck with a large en-suite bathroom and separate his-and-her closets. Two twins and two doubles are on the deck below. The yacht also has quarters for three to four crewmembers.