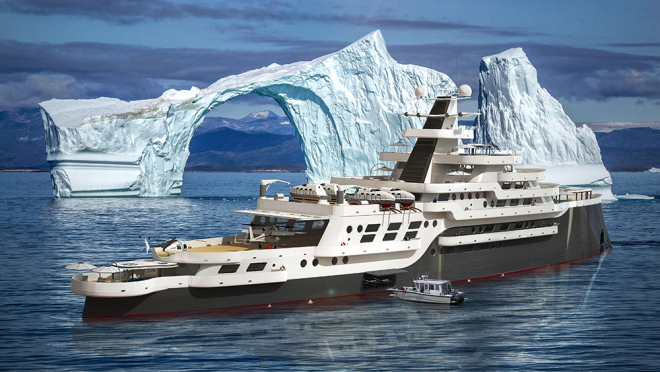 This insane superyacht concept is 117 metres of exploration with a helipad, hangar, and a submarine garage

Alexis, part of the Goliath polar-explorer series, is a go-anywhere vessel with many luxurious touches.

Designer Steve Kozloff, creator of the Goliath polar-explorer series, recently unveiled its most impressive member yet. The Alexis design blends grace and bulk across six decks. The 117-metre behemoth looks like the ultimate expedition yacht, or even a sizeable research vessel, designed to explore the ends of the earth.

The California-based Kozloff incorporated a lot of luxury into the polar-class hull, including features like a swimming pool on the bow and another for the owner’s private use on the stern. And Alexis not only has a certified helipad, but also a 280-square-metre hangar, with enough space for four small helicopters. Kozloff designed the landing pad so that the boat’s fleet of aircraft could take off and land in all conditions, and then be safely stored in the hangar out of the elements. Having different types of helicopters turns the yacht into a base for exploring remote, out-of-the-way land destinations that cannot be reached any other way.

Kozloff’s laser-focused attention to detail makes Alexis more than just the usual explorer concept. The two pools, for instance, have hard retractable covers so the pools do not have to be drained. That’s a detail that many superyacht crews, who have to drain thousands of litres from superyacht pools before traveling, will appreciate. 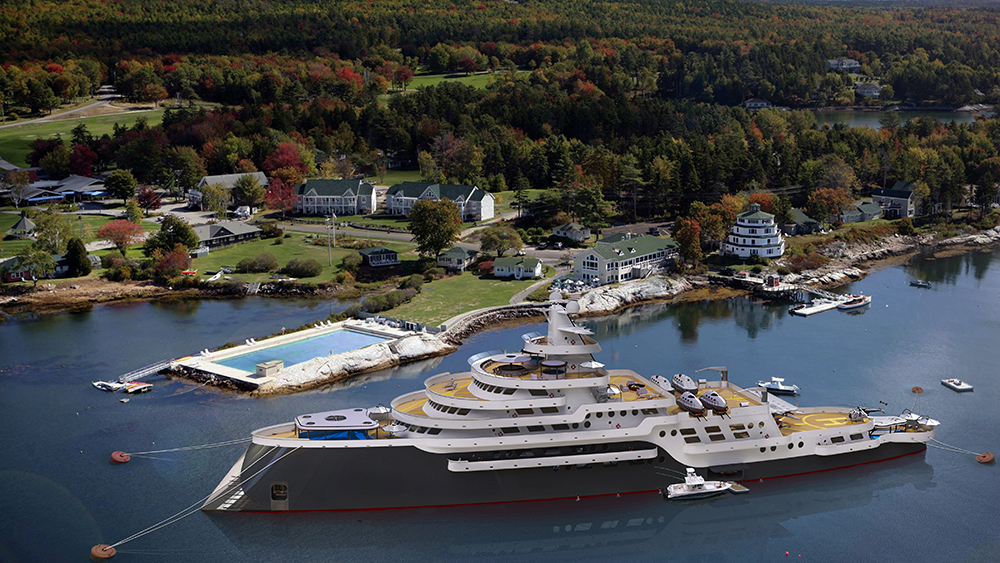 Other features include heated handrails and doors to mitigate icing problems while visiting cold regions. The ice-class hull is even designed for breaking through moderate ice. Alexis also has an unusually large tender garage that holds two submarines, multiple tenders, and many other water toys. Plus, there are four “freefall” lifeboats that can be launched in all conditions.

Inside the intrepid, go-anywhere exterior are not one, but three master suites, and luxury accommodations for up to 20 guests. The exterior spaces forward are designed for guest use, featuring a handsome stair-step series of decks amidships that culminate in an outdoor sky bar on the top deck. The swim platform at the stern of the yacht is a special place for the owner to enjoy private and immediate access to the water.

If Alexis is ever built, it promises to be one of the most magnificent explorer yachts ever, a vessel that can travel anywhere without skimping on the luxuries that make yachting special.