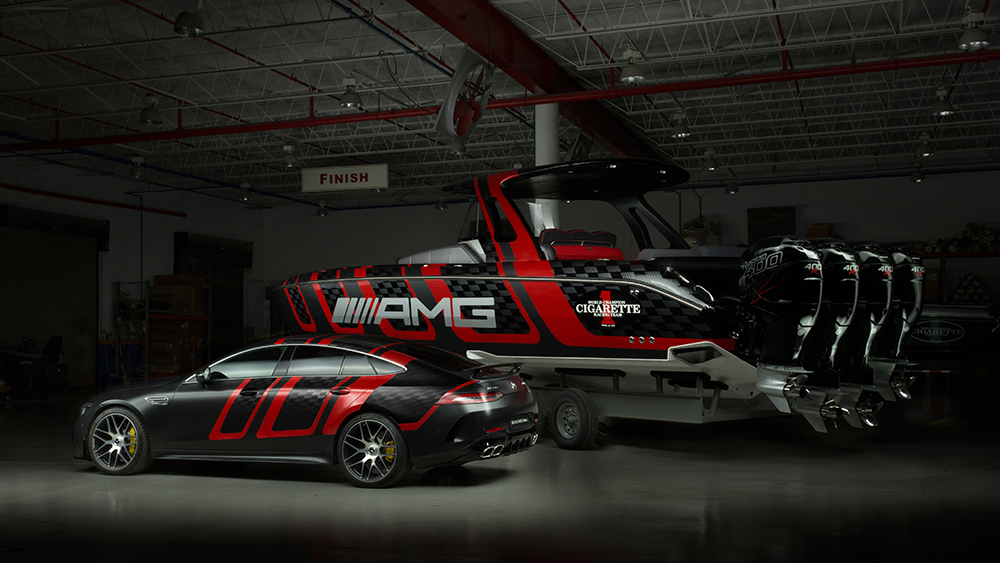 If it’s February in Miami, performance aficionados know it is time for one of the most exciting collaborations in motorsports. Cigarette Racing Team and Mercedes-AMG have co-developed 11 AMG boats, but the partners continue to move well beyond the aesthetics by taking a much deeper dive into the design and technology of the one-off Cigarettes.

This year’s project, the 41 AMG Carbon Edition, has the same colours and sleek DNA of the Mercedes-AMG GT 63 S Coupe that inspired it (and sits next to it on Pier 2 of the Miami International Boat Show), but Cigarette’s engineers made sure that it reflected the lightweight, carbon-fibre construction of the four-door sports car. 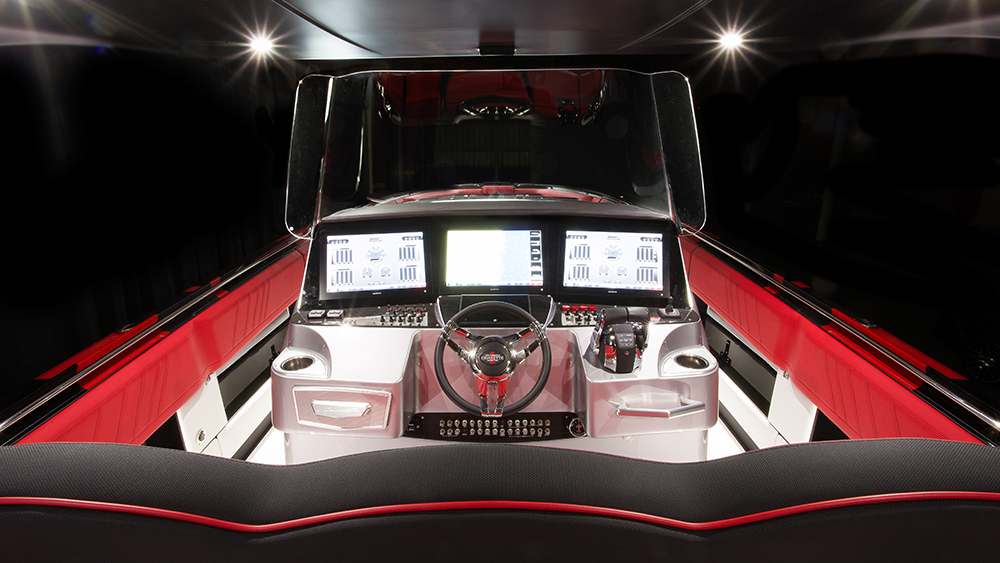 Powered by quad Mercury Racing 400R outboards harnessing 1200kW, the new 12.5-metre boat not only looked sleek and powerful at the dock, but ran with authority in the aquamarine waters of Biscayne Bay. The Cigarette reaches a top speed of almost 135km/h, with the ability to carry eight passengers at that speed or, fully loaded, 20 passengers at cruising speed of just over 100km/h.

“There are a lot of similarities between boat and car,” Skip Braver, president of Cigarette Racing said during a sit-down after the 41 AMG Carbon Edition officially launched. “Just as they did with the car, we lightened the boat without sacrificing performance. We modified the design by lowering the centre of gravity and used carbon fibre across the whole boat.” 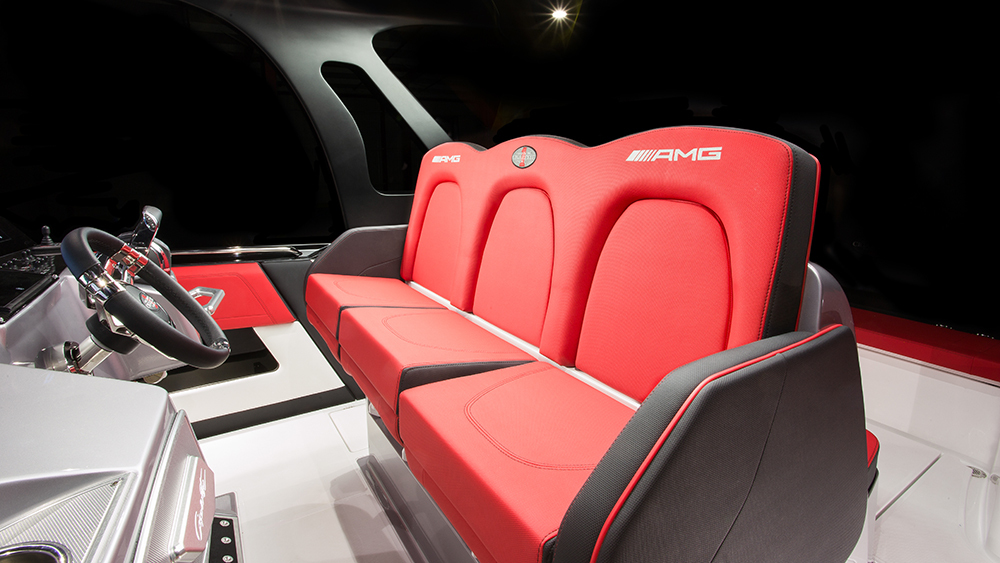 The Miami builder lightened the load by around 225kg compared to the 50 Marauder AMG powerboat, 2017’s AMG boat, using sandwich construction with carbon-fibre structural laminates surrounding the boat’s lightweight core. The deck, rudder, roof lining and hardtop are also carbon fibre. Many builders use carbon-fibre components, a tricky material to work with, to use the carbon designation for branding. But this new Cigarette is one of just a handful with majority carbon construction.

Carbon tends to make a hull stiffer, lowering the flexibility and therefore “feel” of a running surface. The new Cigarette’s ride feels smooth and offers an unusual sense of control after the speedo has climbed past 130km/h. Many go-fast boats hit impressive speeds but launching off a wave and going airborne usually makes any sense of safety evaporate. I’ve never been on a Cigarette that didn’t make a smooth landing or felt like it was out of control. We design our boats so just about anybody can run them, says Braver. 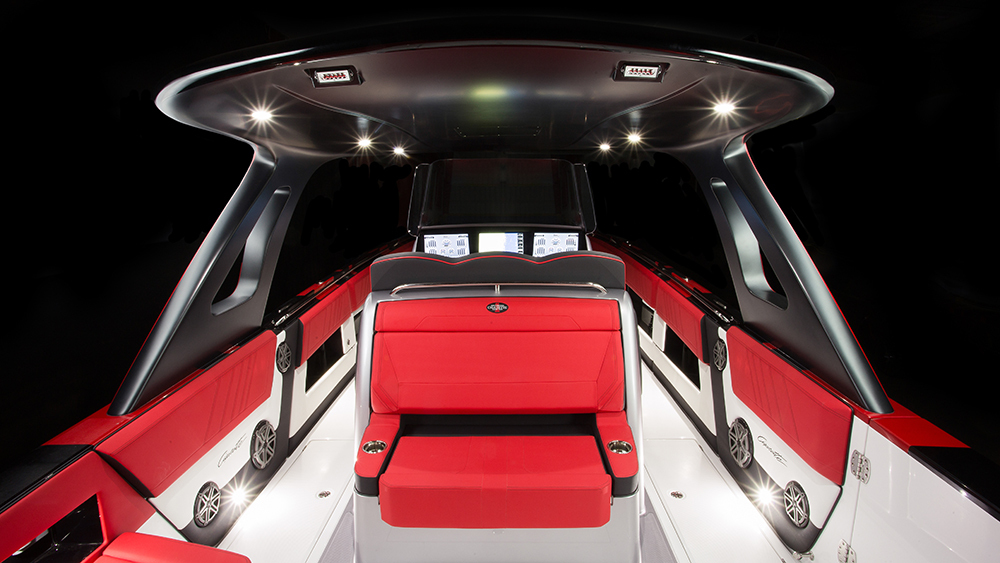 Gorden Wagener, chief design officer at Daimler AG, shares the design responsibilities of the AMG boats with Cigarette. The partners begin a new project more than a year in advance, with much back and forth about different concepts. Wagener, who has referred to Cigarette as “Formula 1 on the water,” told me at previous Cigarette AMG launches that he loves collaborating with the boat builder every year. “This Cigarette Racing boat underlines the current brand aesthetics of Mercedes-AMG,” he added. “It makes the passion for aesthetics and power noticeable.”

Per Wagener, this year’s dramatic red-and-black exterior matches the Mercedes-AMG GT 63 S beside it. The boat’s cockpit, with custom-stitched seating and black accents across the topside and in the day cabin, retains the same colour scheme. Fit and finish is also exceptional. Usually, black or even red upholstery on a boat would be verboten because it gets so hot in the sun. “Cigarette Cool” upholstery, however, deflects heat by 30 per cent, making even dark colours usable.

The 12.5-metre centre-console design carries a similar design philosophy to the GT 63 S. Like the car, the centre-console can carry a larger number of people without sacrificing performance. And like the quad Mercury 400s, the GT 63 S’s hand-built AMG V8 b-turbo engine that develops 470kW and 900Nm torque is equally impressive. 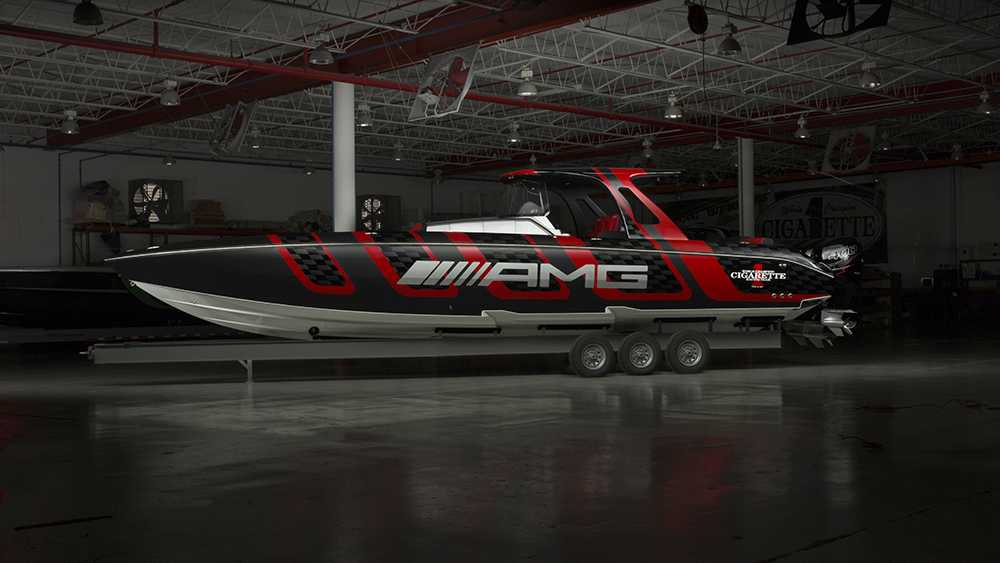 Braver says the AMG project pushes the builder out of its comfort zone, forcing it to experiment with new technologies like this year’s carbon-fibre layup. “Our use of materials continues to evolve,” he says. “It’s all for the goal of gaining more performance and luxury, while expanding what it means to own a Cigarette.”

The hull lay-up starts about eight months before the boat debuts in Miami, while the paint process takes more than two months. The upholsterers need more than a month to create the hand-stitched seating. “We have 16 concepts that go back and forth during the approval process,” says Braver. “In the end, we have a design we’re both happy with.”

Braver says the two teams are already talking about next year’s project. “We’ve seen other companies try to copy this kind of collaboration, but it just hasn’t worked,” he says. “It’s unique across the industry. It feels like mutual admiration and when we hear them talking, it seems like they feel the same. It’s an honour to be partnering with them.”