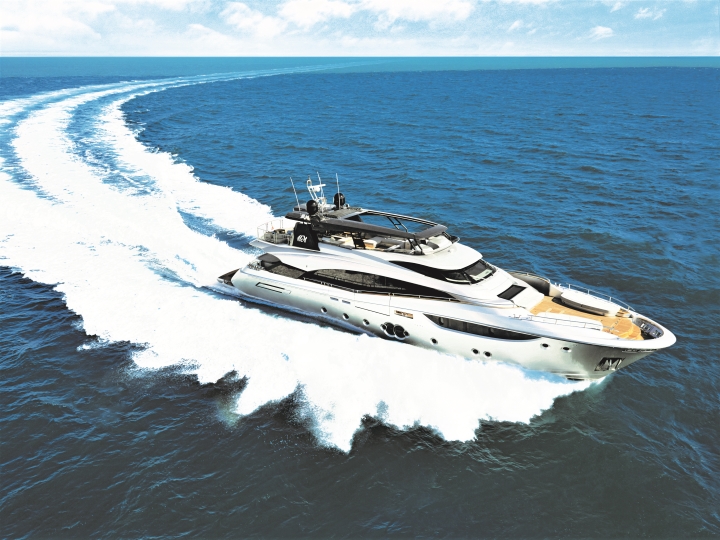 The superyacht built for speed

The Monte Carlo Yachts 105 features the amenities and design details of a larger, custom-built yacht with the build time of a smaller production vessel. Those attributes led six buyers to place orders after the Italian brand introduced its new semi-custom flagship at a private event in Venice.

With the 105, Monte Carlo (montecarloyachts.it) has taken a new approach to building yachts, employing a manufacturing technique similar to the one used to build commercial airliners. According to the Monfalco-based company, it takes half as long (six months) to construct the 105 as it would with a traditional production method. Instead of building the hull and then constructing the interiors of the lower decks inside the hull, Monte Carlo builds the hull and interiors concurrently. It completes the interiors as a separate, single module and then inserts this into the hull towards the end of the construction process. The 32-metre-long (105-foot) hull is a monocoque structure that is formed by vacuum infusion and incorporates lightweight Kevlar and carbon-fibre in strategic areas. The hull allows for a more spacious interior because its support system is less voluminous than that of a traditional hull. According to Monte Carlo, the hull also makes the 105 15 per cent lighter than other yachts of the same size. The weight savings helps it reach a top speed of 27 knots and cruise at 24 knots for 400 nautical miles.

Like the other models in Monte Carlo’s lineup, the 105 was designed by Nuvolari Lenard, a Venice-based naval-architecture firm whose previous projects range from the 15.5-metre Marquis 500 sport yacht to the 88-metre Lürssen Quattroelle. The design’s highlights include a 75-square-metre flybridge, which is as large as those on 46-metre yachts. The flybridge is covered by a carbon-fibre hard top equipped with an electronically operated sunroof. The lounge area at the bow is 30 square metres – three times that of a competitor’s 35-metre yacht. The 105’s most impressive living area is the full-beam, split-level, 45-square-metre master suite. On hull number 1 in the series, the suite is decorated with brushed grey-oak panelling, Poltrona Frau lounges and Hermès and Armani fabrics. Three steps down from the bedroom are two bathrooms that feature Brazilian Magic Brown Stone floors and Carrara marble inserts. “With this new build process, we can offer almost unlimited customisation,” says Federico Peruccio, marketing manager for Monte Carlo Yachts. “The six 105s will be entirely different. That’s the beauty of being able to build a custom yacht on a production basis.”