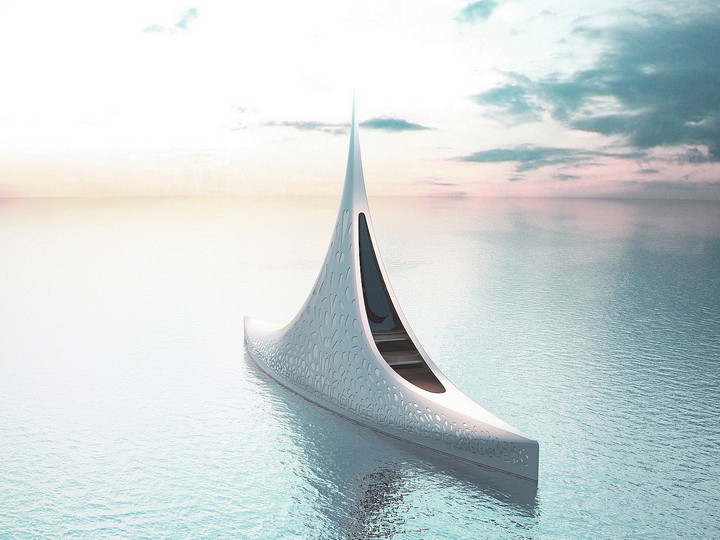 Ten outrageous superyacht concepts we would love to see built

These are not joke designs, though they may never know the crash of a champagne bottle against their hulls.

Concept superyachts, much like their automotive counterparts, provide yacht designers with a unique opportunity to push their imaginations to the limit and develop ideas that may find their way into future production. The following 10 concept yachts are so unbelievable that we want to assure readers that they are not jokes — though they may never know the crash of a Champagne bottle against their hulls.

Cheers to the brightest sparks cast from the sea, though. Sleek as a bullet and seemingly as fast, the Belafonte by Federico Fiorentino will have the potential to reach speeds of up to 24 knots. In fact, Fiorentino took inspiration for the yacht design from sports cars. The bronze-hued, 50m Belafonte features five staterooms and a skylounge, along with a 2.5-year build time. A radical departure from standard seafaring form, the 132m Star — the shared vision of Italy’s Lobanov Design and Britain’s BMT Nigel Gee — rises up like a majestic monument from the water. Powered by eight generators, the yacht is equipped with two azimuth thrusters that can be set to slowly rotate the boat over the course of the day to maximise sun exposure. Latticework windows throughout all eight decks add an ethereal, celestial element. Conceived by the Italian Sea Group, the 476-ft Admiral X Force 145 is equipped with a two-level beach club and spa, indoor and outdoor pools, two movie theatres, multiple gyms, two helipads, and VIP suites for guests. The yacht also reserves half of an entire deck for the owner’s exclusive use and enjoyment during oceanic getaways. A recent addition to Pastrovich Studio’s Parkour yacht line, the 90m X-Kid Stuff mirrors the active and fit lifestyle of its intended owners with its own impressive strength-to-weight ratio, thanks to the honeycomb-like construction. Along with requisite staircase access, a rock-climbing wall, and a fire pole to facilitate quick deck-to-deck transitions, while an inflatable jetty connecting to the beach eliminates any unwanted downtime waiting for transport. Both increased size and sustainability set the latest leviathan from Nauta Yachts apart from the megayacht masses. Employing both diesel and electric power, the 164m hybrid can cruise at 18 knots with a range of 11,000km. Created with efficient use of space in mind, Project Gleam’s seven decks feature a hammam, a disco, a casino, a theatre, 16 sleeping quarters, and multiple cocktail bars. A ship for all seasons, the 80m Skyback—designed by Cor D. Rover for Fincantieri features a retractable climate-controlled glass enclosure for its aft deck pool so that inclement conditions will not prevent those onboard from making a splash. Yet with six decks — including one for owners only — the Skyback graciously accommodates 10 guests without anyone feeling like they are in a fishbowl. With a beam of 15.2m, this 35m catamaran offers guests plenty of room to get comfy. And with intrinsically lower draft and higher fuel efficiency over conventional counterparts, the concept craft can access areas other similarly sized yachts cannot. Turkish yacht designer Emre Yildirim’s 96m Miya has the aesthetic of Audrey Hepburn — simple yet sophisticated. Notable amenities include an owner’s suite with expansive wraparound windows, an integrated balcony, a swimming pool, a beach club, a theatre, and a helipad. The 93.8m Purity from Azure Naval Architects ups the ante on space and speed with the ability to reach 21 knots and a cruising range of 5,500 nautical miles. Inside, guests have access to a beach club, a wellness area, and a gym. In the off chance even more space is needed, the pool floor aft can be raised to create extra space or for use as a helipad. With a piercing profile, Oceanco’s 351-ft Stiletto is also a cut above others in its class when it comes to interior space, thanks to an architecture partnership with BMT and design by Ken Freivokh. A two-storey saloon gives approximately 6 metres of vertical relief, while a whirlpool-equipped owner’s suite, and seven guest cabins are complemented by two swimming pools (one of which is 7.6m long), a waterfall feature, gym, and beach club. Two MTU 16V2000 M72 engines and a hybrid propulsion installation keep her efficiently slicing through the water at up to 18.5 knots.