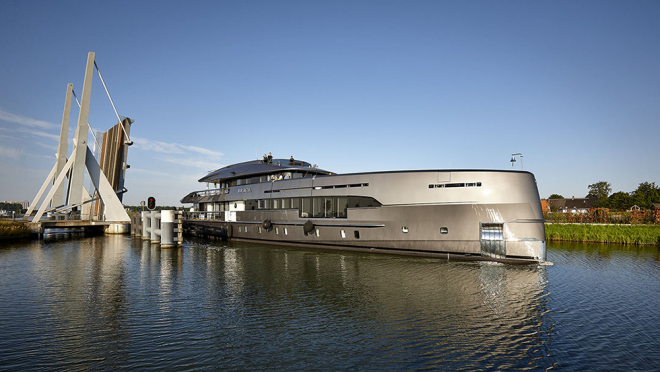 A customised layout and paint job are just a few of the bespoke details on this semi-custom yacht.

The stunning Erica, or Project Boreas as it was known during construction, was recently delivered to its owners by Dutch shipyard Heesen, having just aced its sea trials with a top speed of 20 knots and proving a range higher than expected.

Started on spec, the yacht’s 50-metre full-aluminium, super-efficient fast-displacement hull created by Van Oossanen Naval Architects was based on Heesen’s Nova Plus design and engineering platform. Heesen describes the Nova Plus platform as a fast-displacement superyacht that provides high comfort and high performance in a provocative design below the 500-gross-tonne interior-volume limit (a large plus for builders because a different certification kicks in at 500), with a draft of a mere 2 metres (Bahamas, here we come!).

Frank Laupman established the yacht’s edgy exterior lines (beyond the hull form), which feature a slight reversed stem and travel with the bow to the upper deck line. The result is a strong profile tamed by graceful curves and tapered ends to the decks. Skipping the fashion plates allowed for what looks like suspended upper decks, lending a sense of lightness to the design and keeping it from portraying a weighted-down profile. The custom metallic Mountain Gray paint by Awlgrip, which perfectly matches the colour of the owner’s car, accentuates the yacht’s modern lines. Apparently, applying metallic paint is an exacting procedure (you can see every blemish if not careful) and, in this case, took 10 months to complete. 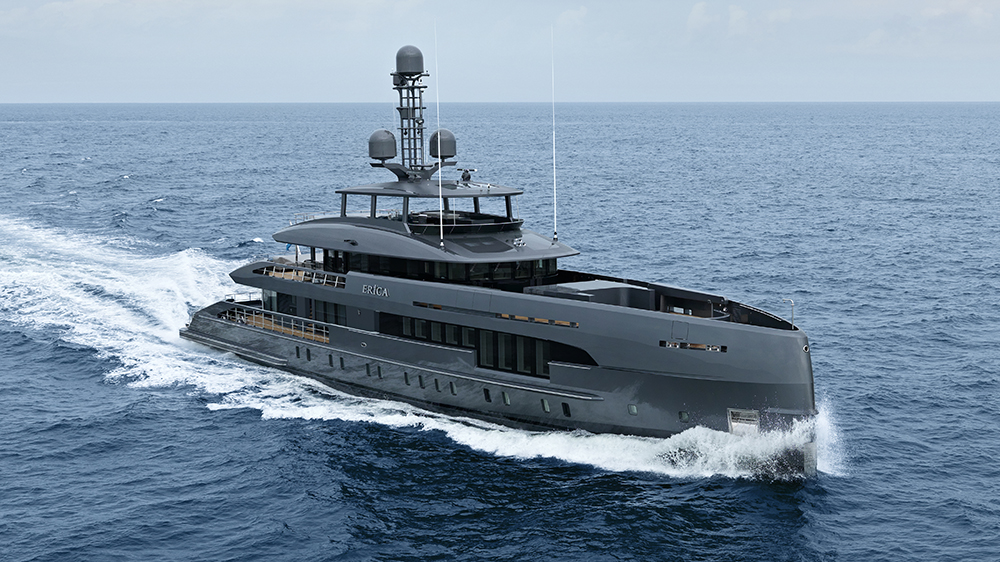 The experienced owner knew exactly what he wanted and was quite involved in the layout of the yacht, carving out how many staterooms and communal spaces he needed from this semi-custom platform that will be used as a family yacht. After all was said and done, Erica ended up with an extra children’s cabin on the lower deck for a total of six staterooms that are made up of the main-deck master suite and five suites on the lower deck. Some of the cabins offer Pullman beds to make way for all the family, and the owner made sure that a washer and dryer were included in the guest accommodation space as well. The yacht can sleep 12 guests total.

Highlights of the interior include the main staircase that travels from the lower deck to the bridge deck and features a nickel mesh wall covering designed by French artist Sophie Mallebranche.

Elsewhere inside the yacht, the owner pushed to increase the connection with the outdoors, insisting, for instance, on smaller overhangs on the decks to allow more natural light inside, and glass panels with integrated blinds on the sundeck’s roof to bring more light to this area. A clear vinyl screen totally shields the sundeck from wind without hiding the views. Large windows in the skylounge open to pull plenty of fresh air inside. Handily, they can be controlled remotely. Though the lower deck houses a gym, the owner also requested a couple of Technogym running machines be installed on either side of the staircase that leads to the main deck aft so he and his guests can enjoy exercising en plein air on the swim platform, right next to the water. 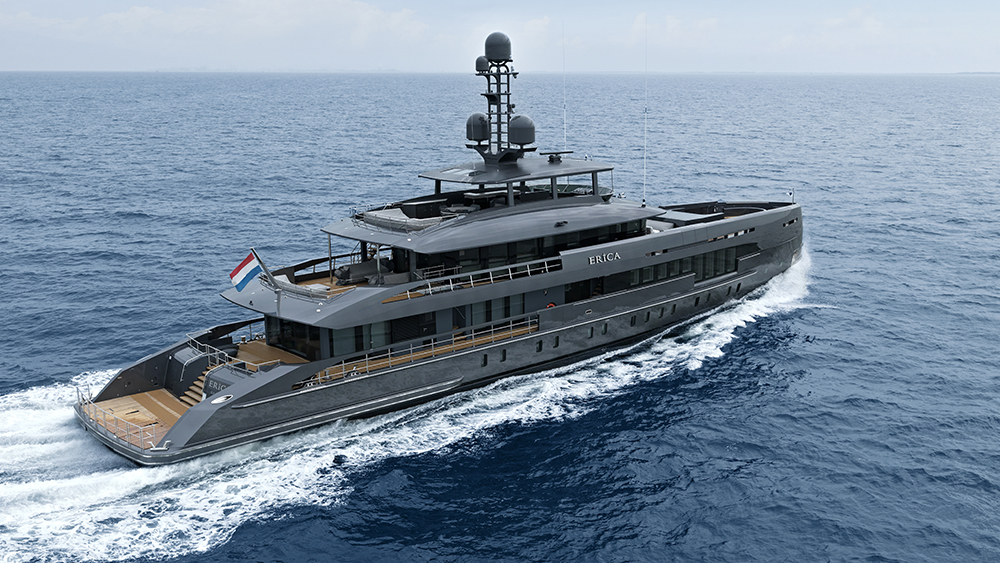 Abbreviated overhangs and lots of windows remind guests that they are on the water.
Photo: Dick Holthuis

A couple of MTU 12V 2000 M72 engines rated at more than 1,400 hp (1,043 kW) each power up the yacht, and, thanks to large rudders and a powerful bow thruster, Erica is also very responsive when maneuvering in close quarters, such as marinas.

Superyacht management company MCM was installed by the owner as technical consultant and representative. MCM cofounder Nigel Ingram said: “Heesen knew exactly what they were doing and I’m very happy with the way the yacht turned out. The owner was quite involved in the details, [Heesen] handled it all very well and the yacht is exactly how he wanted it.”

And because the owner bought Project Boreas a year into the construction process, he only had to wait 10 months to receive his new, pretty customised superyacht. “One of the most important factors for the owner was being able to get the boat quickly. Heesen’s ‘fast delivery’ approach gained him at least a year on the water, which was a huge plus”, added Ingram. Read: Time to contract yours now for next summer’s cruising season!