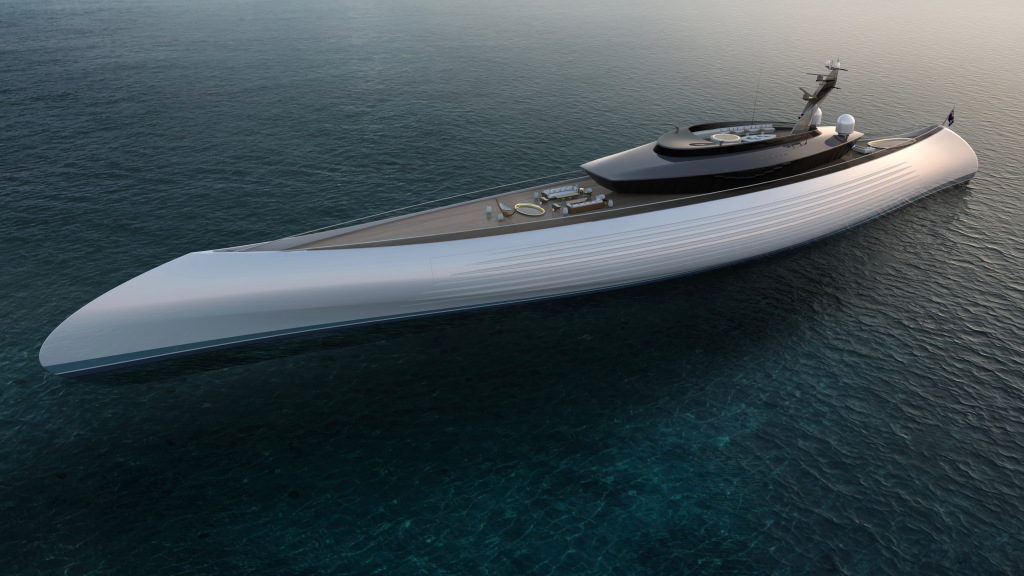 Oceanco’s 377-foot Tuhura is based on one of the most simple but efficient nautical designs in history.

Tuhura, Oceanco’s latest 377-foot project, is a throwback that extends thousands of years farther into the past than any yacht. The exterior by Lobanov Design Studio is modeled after an early dugout canoe that Polynesians once used to cross thousands of miles of the Pacific Ocean. Tuhura is a Maori word meaning to explore, discover, or bring to light. The Oceanco project was unveiled last week at the Dubai International Boat Show (DIBS) by His Excellency Saeed Hareb, secretary general of Dubai Sports Council and Chairman of Dubai International Marine Club.

Igor Lobanov, designer of Oceanco’s recently launched 361-foot Jubilee and 280-foot Amore Vero, adopts a refreshingly new take on all of his designs. “Our Tuhura is a simple idea,” says Lobanov. “The thought was to take a natural shape similar to those seen in the earliest canoe-type craft and enlarge it multifold to a larger scale, using modern technology.” Tuhura’s primal form, he adds, is designed to evoke a sense of exploration.

Italian architect Achille Salvagni, whose recent projects include the 161-foot Aurora and 230-foot Numptia (both built by Rossinavi) also used East Asia and the Pacific Islands as the inspiration for Tuhura’s interior. Like Lobanov, Salvagni is known for going outside traditional parameters of yacht design and creating compelling and unconventional interiors, often defined by their gentle, soft curves and whimsical decor. Salvagni thinks of the interior as a “brushed teak habitat”—on the floors, walls, and ceiling—that also include thin reveals in gunmetal and natural bronze as well tatami floors. “Tuhura is a megayacht conceived for a dynamic owner. Nevertheless, the timeless sense of peace and calmness are the main characteristics,” says Salvagni. “This softness and dynamicity are reflected in the humble elegance and sensuality of the primitive organic shapes echoed throughout.”

Oceanco also designed new technology for Tuhura’s stone-age shape. The yacht has multiple horizontal windows across the hull employing a new glass technology that consists of a series of dots. This technology creates a view looking outward that is completely transparent, but anyone looking at the boat from the outside would not be able to tell the glass from the hull, as the colors are identical. The upper superstructure is also comprised of flat glass panels that give it a seamless look. Tuhura will also push the “smart boat” idea a step into the future. Instead of the typical iPad controls for the owners and guests, the yacht’s IT system will figure out guest preferences for items like music and room temperature and adjust automatically. It will also have a high-tech 360-degree room that provides interactive design and touchscreen connectivity that far surpasses the IT capabilities of any superyacht on the water.

Tuhura’s design can be scaled from 262 to 394 feet, depending on the needs of a future owner. BMT Nigel Gee, the UK firm responsible for Tuhura’s naval architecture, says that the hull shape is naturally efficient because of the simplicity of the canoe form. “It has low overall resistance, good seakeeping, and excellent maneuverability,” says James Roy, Yacht Design Director at BMT. The UK firm decided on a hybrid Azipod contrarotating propulsion system for Tuhura, an efficient, state-of-the-art system currently used on large commercial vessels. “There is a synergy between the efficiency of the canoe hull form, and that of the propulsion system, leading to a yacht which marries an evolutionary simple hull with an evolutionary advanced propulsion system,” says Roy. Tuhura will have a top speed of 18 knots.