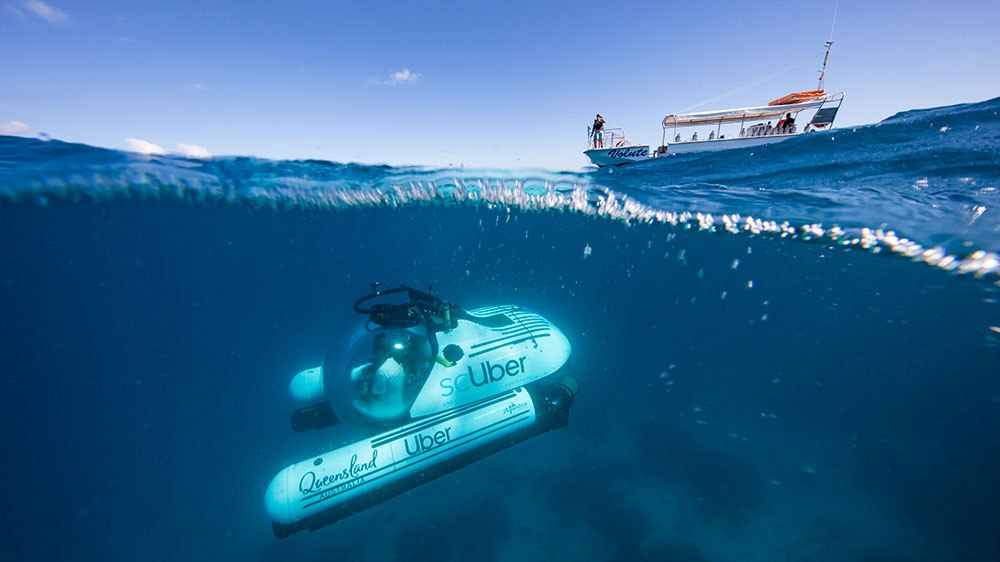 You’ll find Uber on land, sea, and in the air, but now it’s ready for its underwater debut.

The Great Barrier Reef is the epitome of a bucket-list destination. Stretching more than 2250 kilometres off the coast of Queensland, the reef is home to more than 1600 species of fish and 600 different types of coral. Combine that with luxurious properties like the recently renovated Daydream Island Resort and newly opened Elysian Retreat that provide top-notch snorkelling and diving adventures, and you have one idyllic holiday on your hands. But for those who plan on visiting in the coming weeks, there will be a new way to explore the natural wonder.

Last night, the Queensland government and Uber announced the launch of scUber, the world’s first rideshare submarine. Users can either book an outing through the Uber app from Gladstone starting May 27 or Cairns on June 9 until June 18. The $3000 experience includes round-trip transfers in a Tesla; a scenic helicopter ride to and from Heron Island or the Quicksilver Cruises pontoon just off the coast of Port Douglas; and an hour-long ride in the scUber submarine for two people.

The Stingray submersible by Aquatica Submarines is completely battery-operated and accommodates two passengers and the pilot, who drives the sub with a controller that looks just like what one plays video games with. While it can dive up to 150 metres, riders can expect around one-fifth of that capacity being reached. In shallow waters it’s similar to that of snorkelling—keep your eyes peeled for turtles, sharks and rays—but there’s potential for some far more exciting moments as you go deeper into the channels, particularly for anyone who isn’t PADI-certified. Plus, there’s a greater chance of spotting mantas and minke whales in the reefs around Heron Island and Port Douglas, respectively, this time of year. 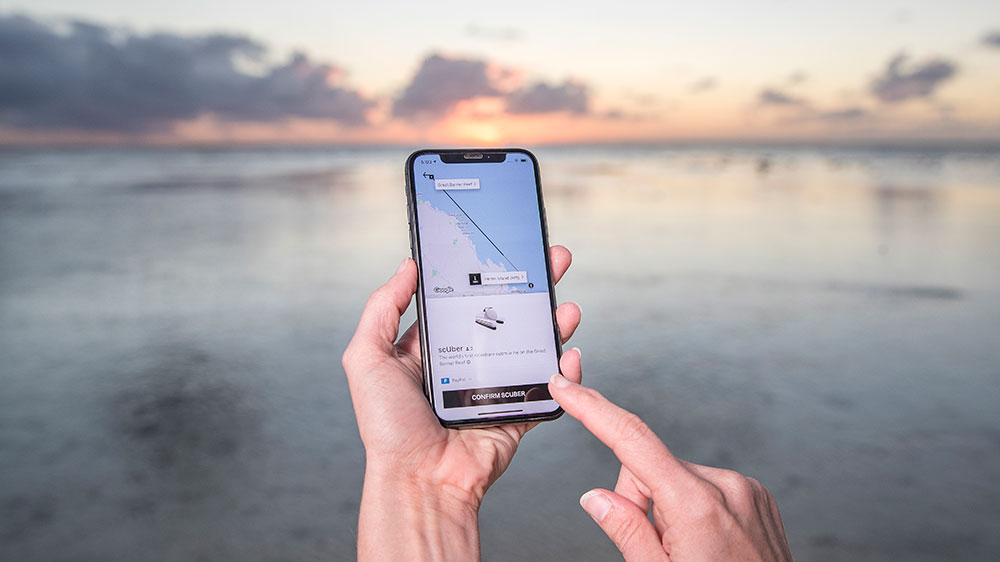 But scUber isn’t just about a unique adventure and the Great Barrier Reef is more than a tourist destination. A complex ecosystem that serves as a home, shelter and source of nourishment for sea creatures and humans alike, the natural wonder is in grave danger due to climate change.

Recognizing the need for action, Uber is donating $100,000 to Citizens of the Great Barrier Reef in addition to the equivalent value of every scUber ride to support the organization’s conservation initiatives. And while scUber is roaming the open waters, the submarine will collect data to support reef research. So while it’s a thrilling experience, your excursion will also help preserve one of the most magnificent parts of this world. 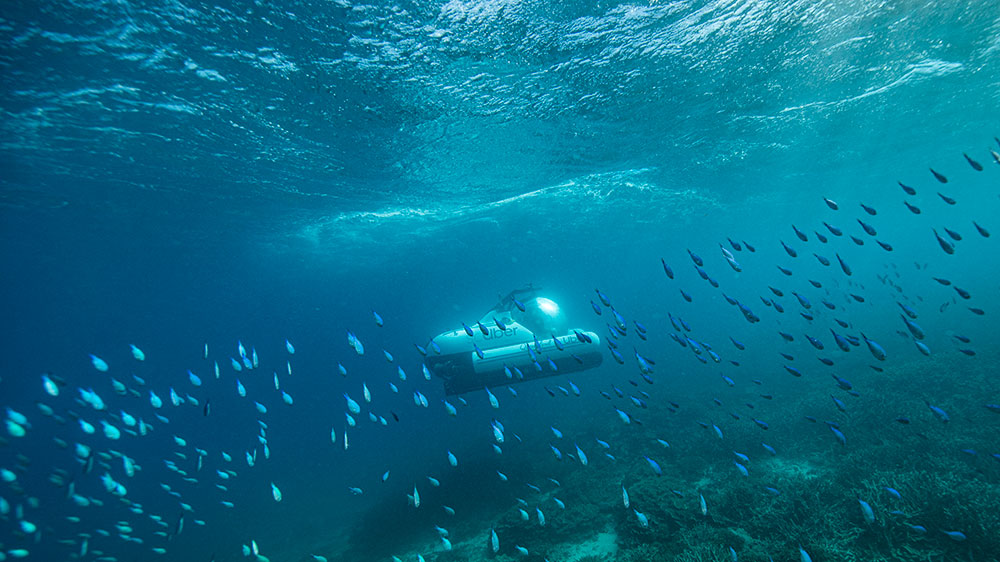 This isn’t Uber’s first foray outside of the ride-hailing service that they began their business model on. Starting in 2015, the company began exploring alternative modes of transportation and offered UberCopter chopper transfers between Nice and Cannes in the South of France. A couple of years later there was the launch of UberBoat in Croatia, which is now also available in India as of earlier this year. And in 2017 Uber expanded to electric bikes, which was quickly followed up by e-scooters the following year. They’re also very keen on introducing flying taxis by 2023.

After scUber, one can’t help but to wonder what’s next for the transportation company. Maybe UberSpace? 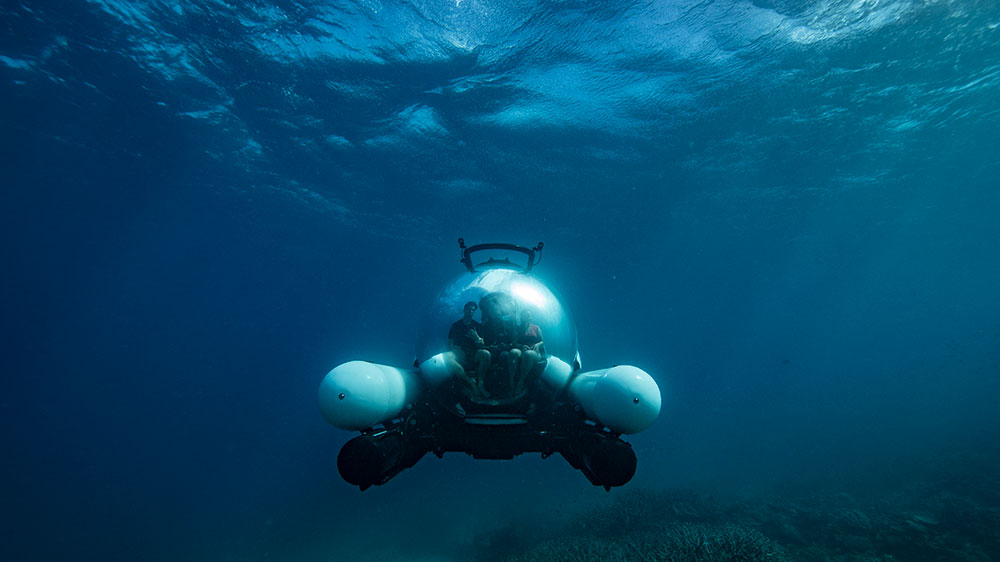 scUber at 30 metres below the surface.
Photo: Courtesy of Tourism and Events Queensland