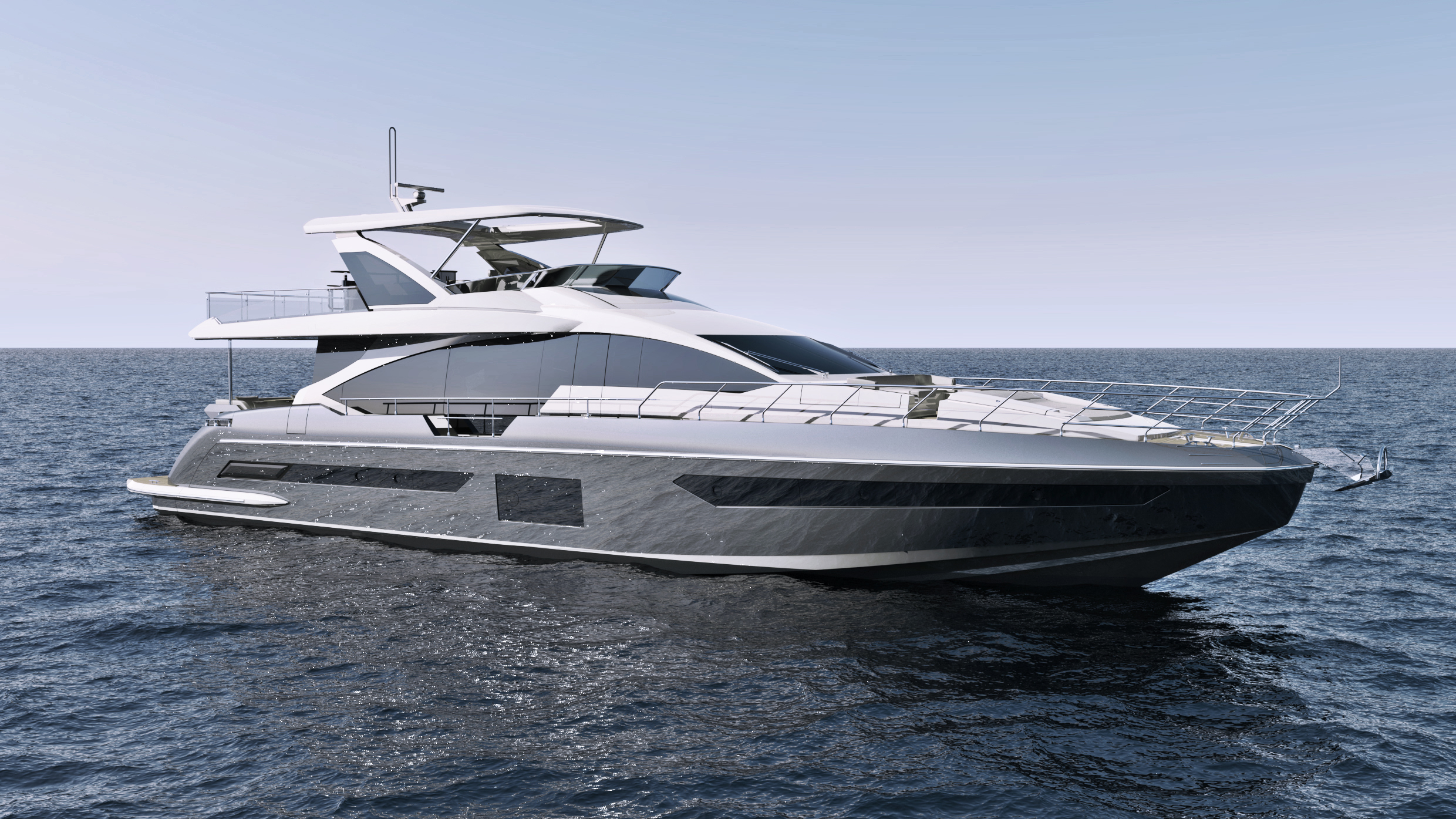 Azimut Yachts’ trifecta of new debuts at the Cannes Yachting Festival September 11 to 16 will be part of the strongest field it has presented in years. The Italian builder’s Cannes fleet will actually total 18 yachts, but the new Azimut S6, Azimut Grande 25 Metri, and Azimut Grande 32 Metri promise to be the stars of the show. Cannes is the first yacht show of the fall season, an international event like the film festival months earlier, where the world gets to see the best new yachts from European, U.S., and Asian yacht builders. Azimut will have one of the largest displays at Cannes, with models from its five collections. Its S and Metri series show the range of Azimut’s design and innovation.

The S series has always shown the yachting world how innovative, unorthodox, and stylish Azimut can be when it is unchained from convention, and the new S6 promises to be a continuation of that tradition. Stefano Righini, Azimut’s longtime designer, has really made his mark with the S series, and the 59-foot S6 shows that he can reach into the future by embracing the past. The boat has classic cues of the S series, including its muscular profile, large enclosed cockpit, and the six-pane through-hull window in the master suite. On this boat, Righini created a protected upper sanctum with the extended hardtop, an area near the helm where the owners and guests can relax in shade and air-conditioning, but also enjoy the sun with the opening sunroof. The upper area also has a full galley and bar for large social events. 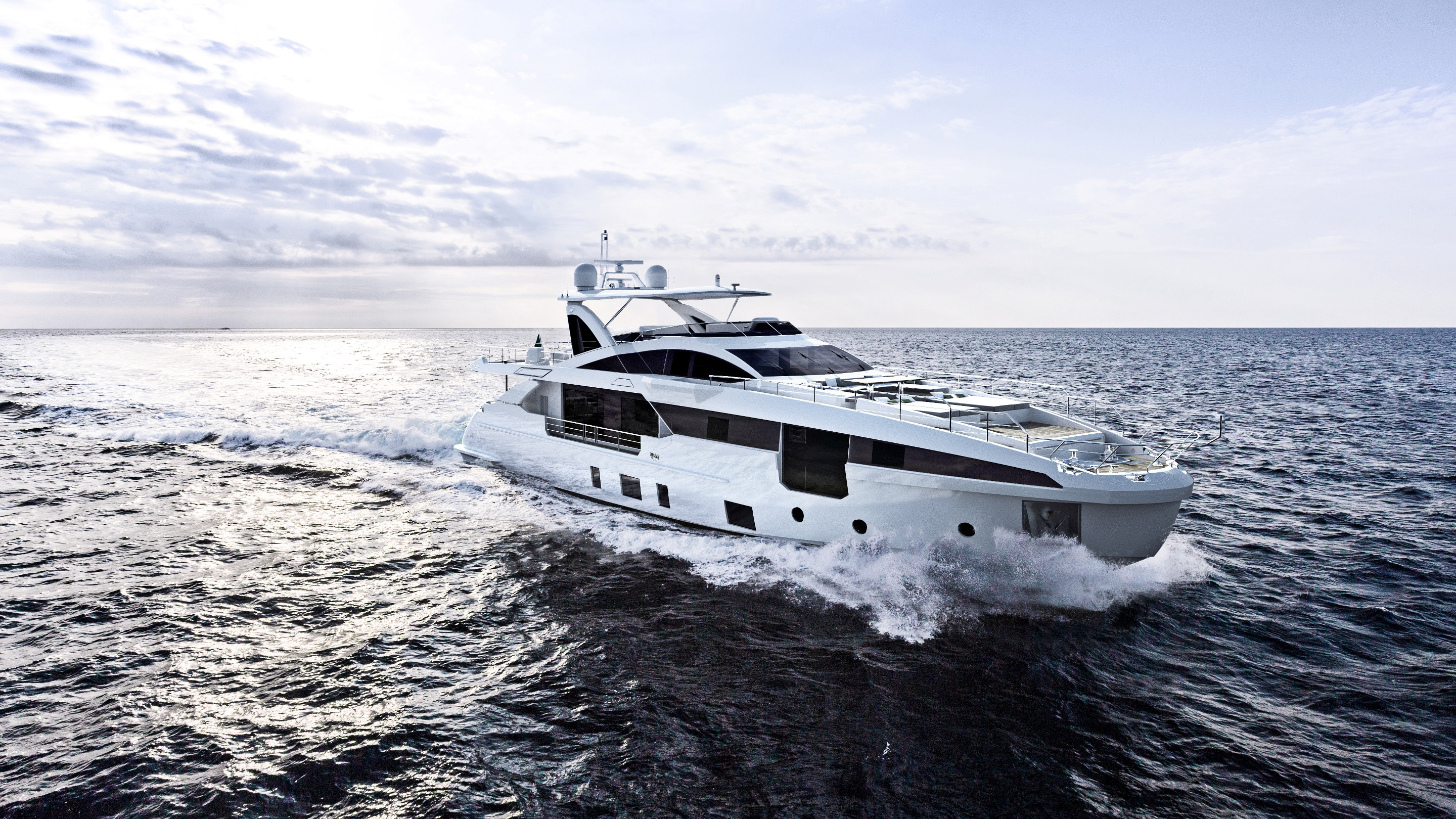 For sun worshippers, there is a three-person sunbed on the bow and three more sunbeds on the stern of the yacht, along with a large lounge beneath the hardtop’s overhang. Having the galley on the main deck left Azimut’s interior designer Francesco Guida extra space below for the three staterooms, including the full-beam master in the stern (with two tables and chairs beside the window, walk-in closets, and adjoining bathroom), and a large VIP cabin in the bow area. The third stateroom has twin beds. Guida did a wonderful job, enhancing the interior’s natural brightness with light-colored woods and fabrics. It is modern without being overly formal, something the S Class has excelled at for 15 years. The new Azimut will be powered by twin 700 hp Volvo IPS D8 engines, giving it a top-end speed of 35 knots. Its cruising speed is 30 knots. Given its 59-foot length, the boat feels unusually spacious, both on the main deck and in the staterooms.

Azimut’s 86-foot Grande 25 Metri follows the success of the flagship 35 Metri, which was launched last year. The new 25 will share the larger yacht’s carbon-fiber superstructure, which not only dramatically lessens weight but allowed the builder to create a larger space that is accented by a roll bar and hardtop. Like the Grande 35, Achille Salvagni did the interior, delivering a custom, whimsical, and often curved interpretation of a traditional yacht cabin. Salvagni’s light touches extend beyond the shape of the saloon and staterooms. He designed the light fixtures and furniture, and even put sculptures into the bulkheads. The Rome-based architect, known more for cutting-edge residential design than yachts, also did away with the usual living room/dining area dividing line. He created a large open-plan saloon on the main deck. By pushing a button, a large dining table rises from the cabin floor between sofas, turning the social area into an eatery. This feature highlights the informal, but innovative, nature of the new 25 Metri. The boat will have five staterooms, including one for crew. Azimut also offers two engine choices. The upgraded twin 1,800 hp MAN diesels give the boat a maximum speed of 29 knots, with a cruising speed of 26 knots.