Watch The Virgin Galactic Spaceship At The Edge Of Space

Virgin Galactic took a giant step towards its goal of making space tourism a reality over the weekend.

On Saturday, the company’s space plane, the VSS Unity, successfully made it to the edge of space before returning safely back to Earth, reports CNBC. The flight was the company’s third successful crewed space flight and first in more than two years.

The company’s latest flight took off from Spaceport America in Truth or Consequences, New Mexico at approximately 10:35 am Saturday. The VSS Unity, which was piloted by CJ Sturckow and Dave Mackay, was carried by its mothership, Virgin’s VMS Eve, until reaching an altitude of 44,000 feet. At that point, the plane released fired its engine and rocketed towards the edge of space at more than three times the speed of sound.

Once there, or at about 89.2km above the surface of the planet, the plane performed a slow backflip in microgravity, which was captured in video shared on YouTube. The US government recognises 89km above the Earth’s surface as the edge of space. Backflip complete, the VSS Unity began its graceful glide back down to the earth and crowd of onlookers, including founder Richard Branson, waiting for it back at Spaceport America. It landed at 11:43 am, meaning the entire flight lasted just over an hour. 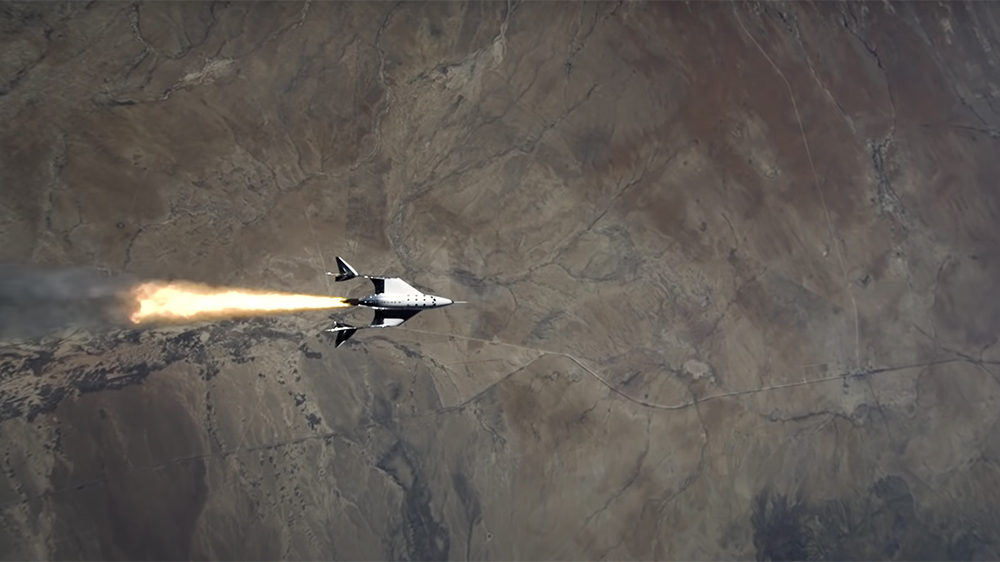 “Space travel is a bold and adventurous endeavour, and I am incredibly proud of our talented team for making the dream of private space travel a reality,” Virgin Galactic CEO Michael Colglazier said in a statement. “We will immediately begin processing the data gained from this successful test flight, and we look forward to sharing news on our next planned milestone.”

Saturday’s flight, which was originally planned for last December, was Virgin Galactic’s third successful crewed space flight, and first since February 2019. The first took place two months earlier, in December 2018. The previous flights took off from Mojave Air and Spaceport in California, where the company was formerly based. Virgin Galactic moved its operations to Truth or Consequences in 2019.

Virgin Galactic has three more space flights planned before the end of the year, reports The Verge. The first will carry two pilots and four of the company’s employees, and the second will include Branson himself. (Hey, the boss has dreams, too.) The third will carry members of the Italian Air Force and is expected to generate US$2 million in revenue.

Virgin Galactic still has two remaining Federal Aviation Administration milestones it has to pass before it can conduct regular space flights. The company sounded hopeful that the information gathered from Saturday’s flight will put it on pace to begin commercial operations next year, though. When it does finally get the green light from the agency, there are plenty of customers ready and waiting for their cosmic adventure. The company already has over 600 reservations, with tickets costing between approx. $290,000 and $320,000 for the hour-long space flight.