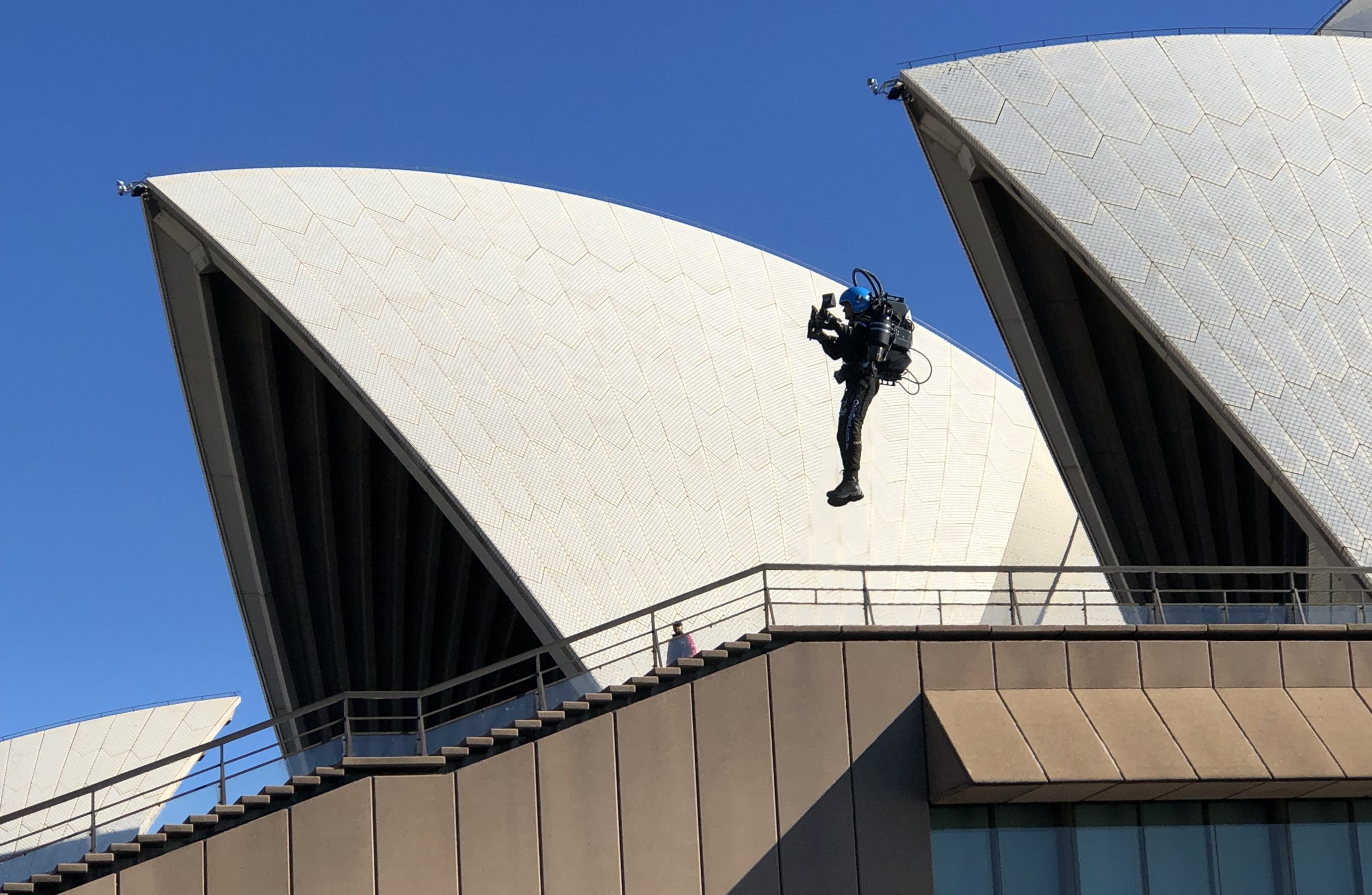 Jetpack Flying School Is Harder Than It Looks—And More Fun

Lift off and come back to earth awash in adrenaline and jet exhaust.

As a child, Sean Ray had a recurring dream in which he floated through the sky—no sound, no pressure, no gravity. Just soaring above the Earth. Euphoric. So, the first time he strapped on a jet pack and broke free of the ground, he experienced a flicker of déjà vu. “It was like that vision I had in my head, that dream I’d had so many times became a reality,” he says. “I almost had to giggle.”

Almost, but not really. The situation prevented it. “The sound comes up, and you feel the heat, the power, the vibration,” he says. “Your heart starts pumping and anything else you were thinking about is just gone. Once your feet leave the ground, it’s a feeling of absolute freedom. You have this flying rocket strapped to your back, and it’s an adrenaline rush unlike anything else I’ve done.”

Ray, 28, is well-into the 50-flight training program needed to become a demo pilot for Jetpack Aviation in Moorpark, Calif., one of four well-publicised companies bringing individual jet-driven vehicles to the world. 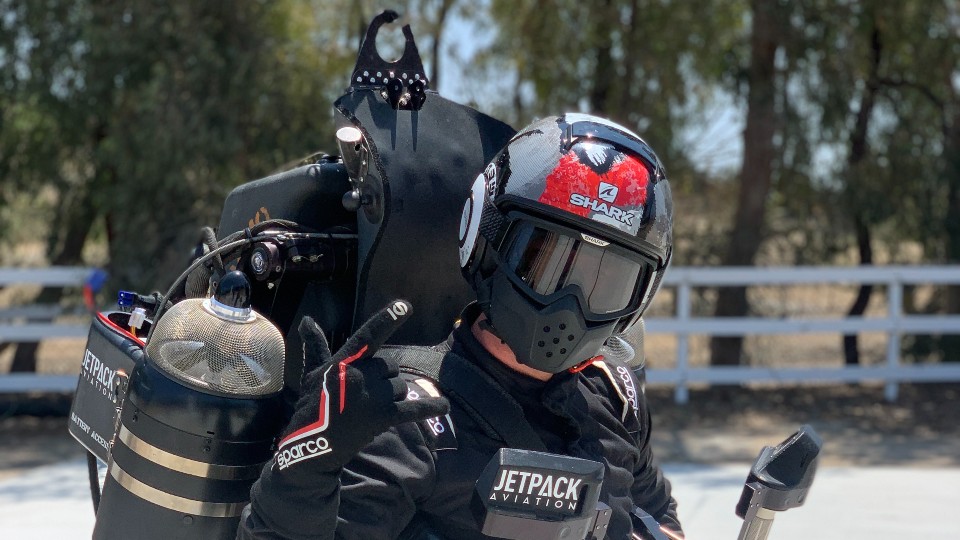 The pilot wears a protective suit and helmet, with a mini-rocket engine on his back. Flying is physically rigorous and most flights last from six to ten minutes. Courtesy Jetpack Industries

Although not all at the same stage of development, at least two—Jetpack and Gravity Industries—allow almost anyone to come to their facility to train and fly on the devices while attached to a safety tether. “Once you’re airborne, you don’t even notice the tether,” says Ray, who, when interviewed by Robb Report, was only days from his first untethered flight.

When unleashed, he’ll be able to fly up to 10,000 feet at speeds of 193km/h or six to 10 minutes. Ray has learned that it’s plenty. “It’s somewhat strenuous and because of the intensity, by the time you’re done, you’re sort of adrenaline addled and thankful to come down,” he says.

Developing that kind of James Bond cool can have costs. Early on, while learning the body control necessary for flight, Ray says he singed his protective flight suit once or twice, and even burned off a few pairs of shoelaces. But he didn’t suffer any personal damage and quickly figured out how to fly without intercepting the jet wash. It helped that he’d been airborne before. He’d won the 2018 world championship for flying on jet boots—those skateboard-like contraptions that propel a user above the surface by shooting out streams of water. 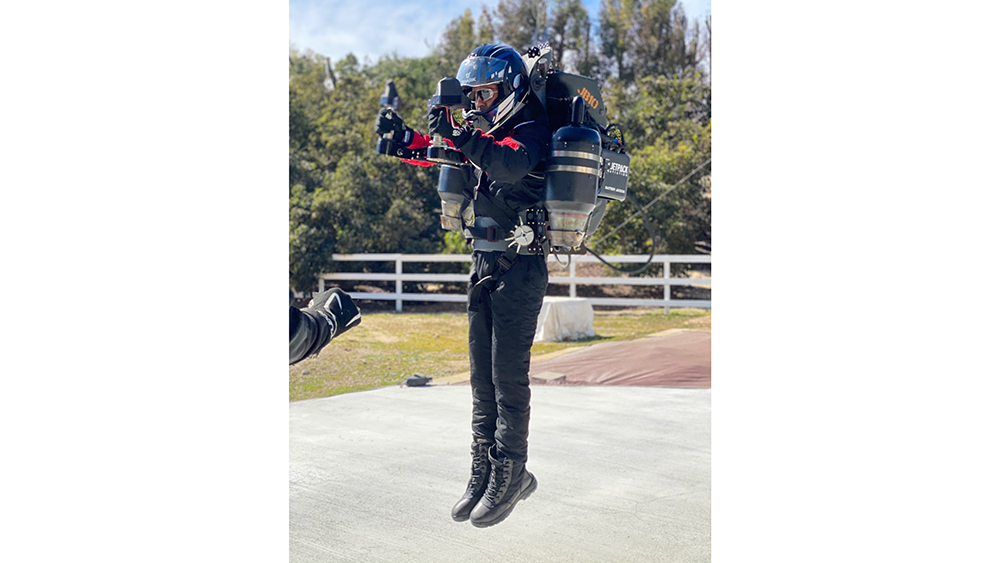 The lessons start by just hovering off the ground, attached to a tether. After 50 flights, a demo pilot earns wings and the tethers are released.

“Balance and body control are so important,” says Cyrus Dobre, a 28-year-old former scholarship gymnast from the University of Iowa who’s also going through the training. “You have to be focused on what you’re doing in the moment.”

Better to focus on the moment than the environmental impact. During one of those 10-minutes-or-less flights, the jet-pack burns through its nine-and-a-half gallon supply of aviation fuel. A small total, but an alarming rate. “We will be using zero-net-carbon fuel starting next year,” says David Mayman, Jetpack Aviation’s CEO. “Our engine makers are also doing R&D on using hydrogen as a fuel source.”

Even with standard fuel, both Ray and Dobre proclaim jet-pack flying is worth it. “Anyone who’s even a little athletic can do it, and, especially on the tether, it’s safe,” says Ray. 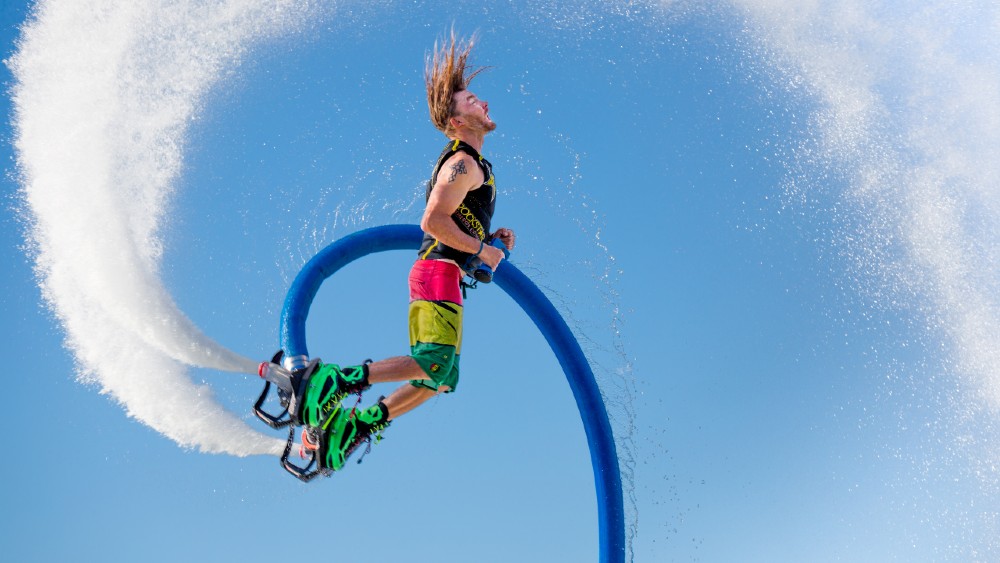 Mastering a sport like water-jet boots helped Ray, who was 2018 champ, with piloting a jet pack. Courtesy Jetpack Industries

There are opportunities, too. Red Bull is sponsoring a race series starting this fall, according to Mayman. “We’re looking for racing pilots now,” says Mayman. “It’s a fairly broad search, not aviators per se, but younger people, surfers, skateboarders, gymnasts. Really, anyone who wants to be the first world champion jet-pack pilot.”