“We will see a big transformation in our industry towards a more sustainable aviation,” said Arjan Meijer, president and CEO of Embraer Commercial Aviation. “Embraer is in a unique position to make viable the introduction of new disruptive green technologies.”

While that sounds good, but no one actually knows how viable or disruptive any one approach will be, which explains why the new Energia line includes four options with varying approaches. 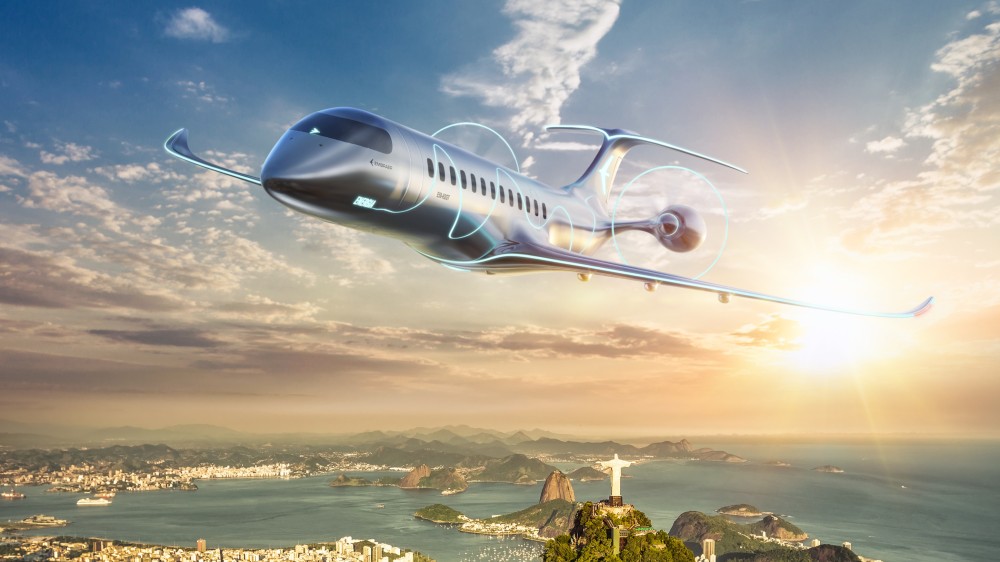 The Energia Gas Turbine, capable of seating up to 50 passengers, would run on either hydrogen or sustainable aviation fuel. Courtesy Embraer

Two of the four designs are nine-seaters. The first, the Energia Hybrid, will have two rear-mounted electric engines that will assist during high-load maneuvers (take-off, climbing) while a combustion engine works solo during cruise.

The mix would make it about 50 per cent more efficient than combustion alone, and it would cut 50 per cent of carbon emissions—90 per cent if running on sustainable aviation fuel (SAF)—and offer an 800km range. Embraer estimates it could launch by 2030.

The Energia Electric has the same seating capacity but a different look, with a wide glider-inspired wing and a single counter-rotating prop at the back driven by a fully electric power system. It would produce zero tailpipe emissions, but the range would drop to 320km and the timeline moves back to 2035. Quick-change batteries in the nose would speed turnaround times. 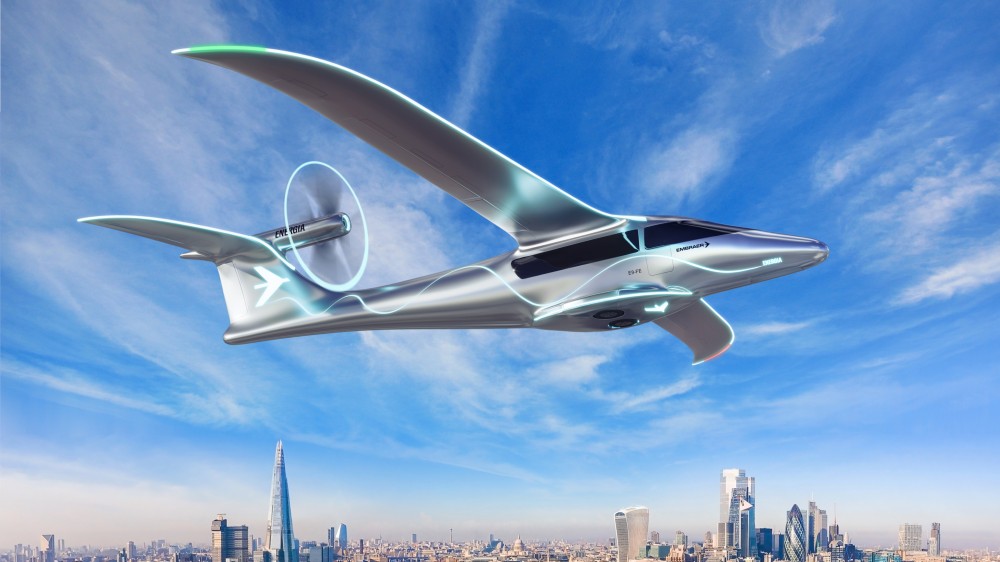 The nine-seat Energia Electric has a single electric engine at the rear of the aircraft. Courtesy Embraer

“Small aircraft are ideal on which to test and prove new propulsion technologies so that they can be scaled up to larger aircraft,” said Luis Carlos Affonso, Embraer’s senior vice president of engineering.

Those larger aircraft would include the 19-seat H2 Fuel Cell, which will have two rear-mounted electric engines powered by hydrogen fuel cells.

It’s expected to offer a 370km range, but advancements that reduce the weight of the cells and the liquid hydrogen tanks could improve the performance, especially since Embraer doesn’t see it hitting the market before 2035. 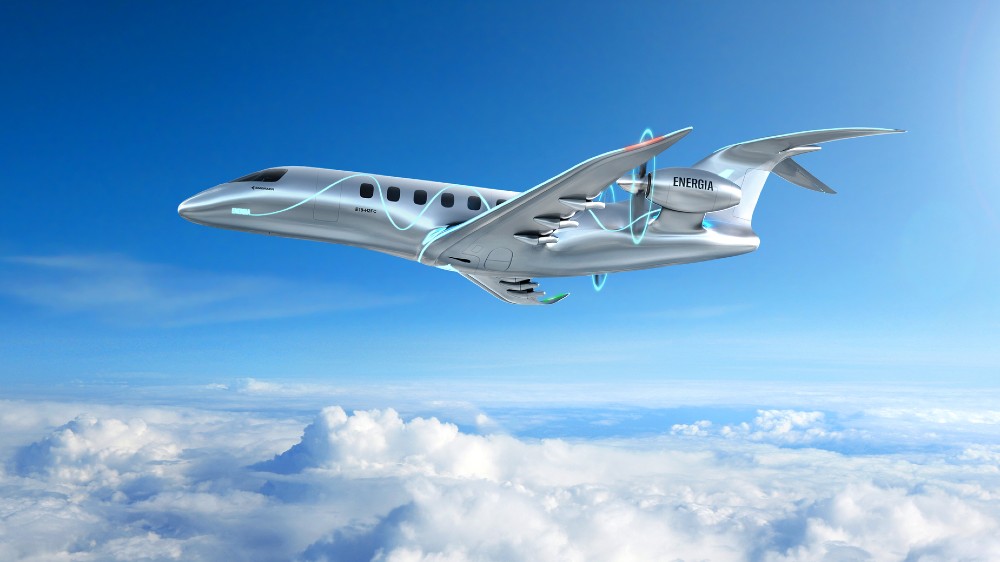 The 19-passenger Energia Fuel Cell will have two electric engines and be powered by a hydrogen fuel cell. Courtesy Embraer

The granddaddy of the Energia line is the H2 Gas Turbine, which would run either hydrogen or 100 percent sustainable aviation fuel through two standard turbines, which would allow it to carry 35 to 50 passengers. It would cover 595km on H2 and 575 if using SAF.

While Embraer calls them concepts, it intends to build all four as part of its drive towards a zero-carbon future. The Brazilian aircraft builder has already announced its aims to make all of its aircraft 100-percent SAF compatible by 2030, and it tested an all-electric demonstrator craft in August.

Embraer says it will debut a hydrogen demonstrator in 2025. 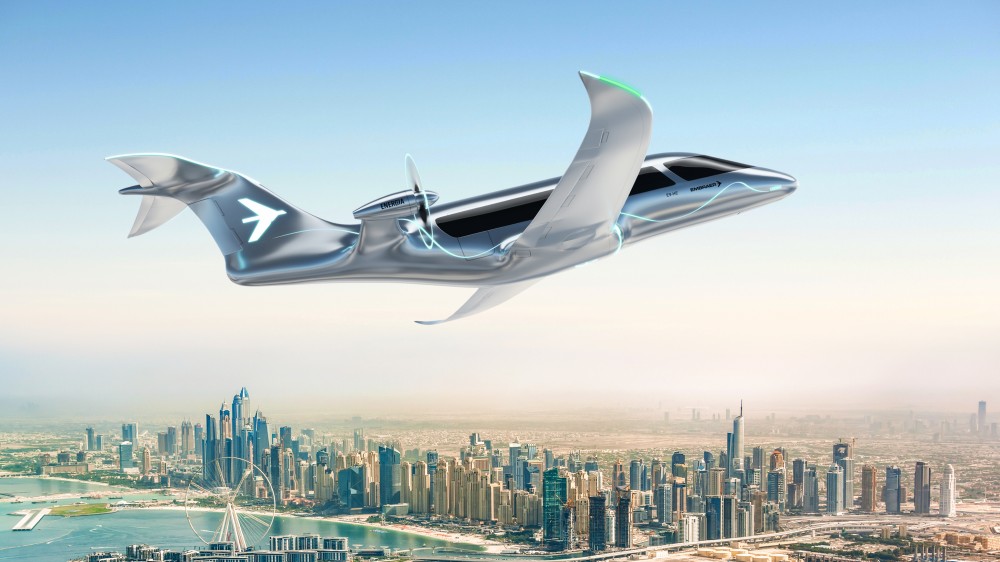 The nine-seat Energia Hybrid combines rear-mounted electric engines for takeoff and landing with a combustion engine for cruising. Courtesy Embraer

“We see our role as a developer of novel technologies to help the industry achieve its sustainability targets,” said Affonso. “There’s no easy or single solution in getting to net zero.”