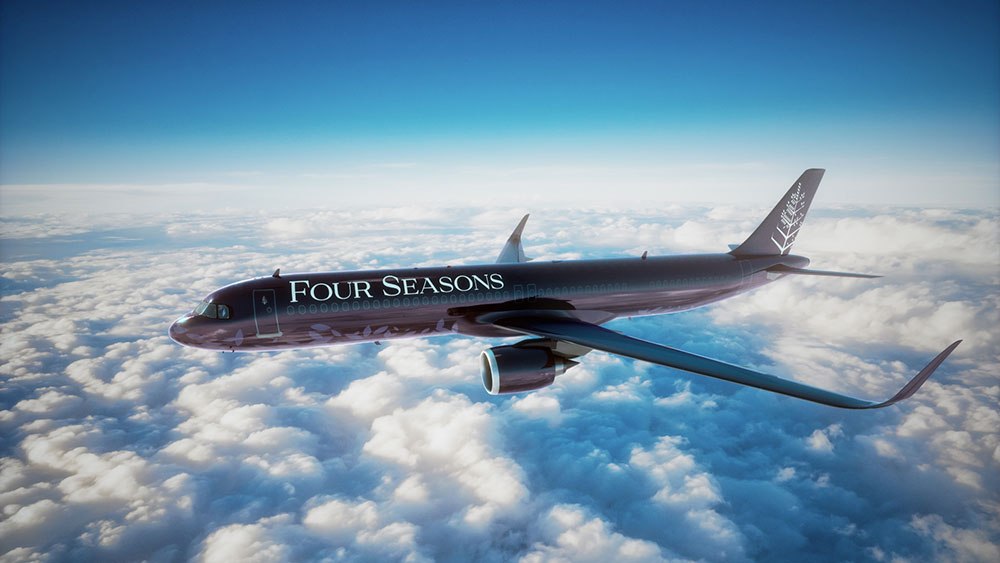 The full bar will whip up cocktails inspired by your next stop while world-class chefs host workshops on local fare.

World travellers content to let Four Seasons Hotels & Resorts curate their itinerary and travel experiences for them were first treated to the luxury hotel’s private jet experience back in 2015. For a minimum of $209,400 per person, posh three-week adventures that span multiple countries and continents were offered, complete with Four Seasons lodging wherever the plane touched down. Now, Four Seasons is introducing its newest private jet, one that’ll be the successor to the 2015 jet, and it’s a beauty, rife with decadent amenities.

The new plane is a narrowbody Airbus A321LR aircraft, which hails from the new Airbus NEO family. It’ll be reimagined and reconfigured by Four Seasons to seat 48 passengers, each in a lay-flat first class seat. (The outgoing jet, a Boeing 757-200ER, had room for 52 travellers.) According to Bloomberg, the Airbus was selected for its greater ability for customization and its longer range of flights, affording more direct routes. The interior appears to be more subdued and inspired by earth tones than the outgoing, bright colourful themes of the Boeing jet.

New to this private jet will be a lounge area, which includes a full bar and mixology staff who can whip up anything you’d like. The space will serve double duty as a congregation point for travellers to learn about the next destination from Four Seasons staff. Interactive workshops will be held, featuring world-class chefs, wellness experts, arts-and-culture specialists and more.

The comfy seats will be custom-made by Optimares, clad in Italian leather from Poltrona Frau, and you’ll get a personal ottoman to rest your feet or invite your adventure companion to sit for a face-to-face chat. A personal iPad tucked in each seat will provide in-flight entertainment, too. The plane will boast larger bathrooms that’ll be comparable to residential ones, and the galley’s been expanded to give Four Seasons chefs more room to create elevated fare and local cuisines from the next stop.

Bookings for the new private jet will begin in the middle of this year and pricing will be dependent on the bespoke journey or adventure selected.