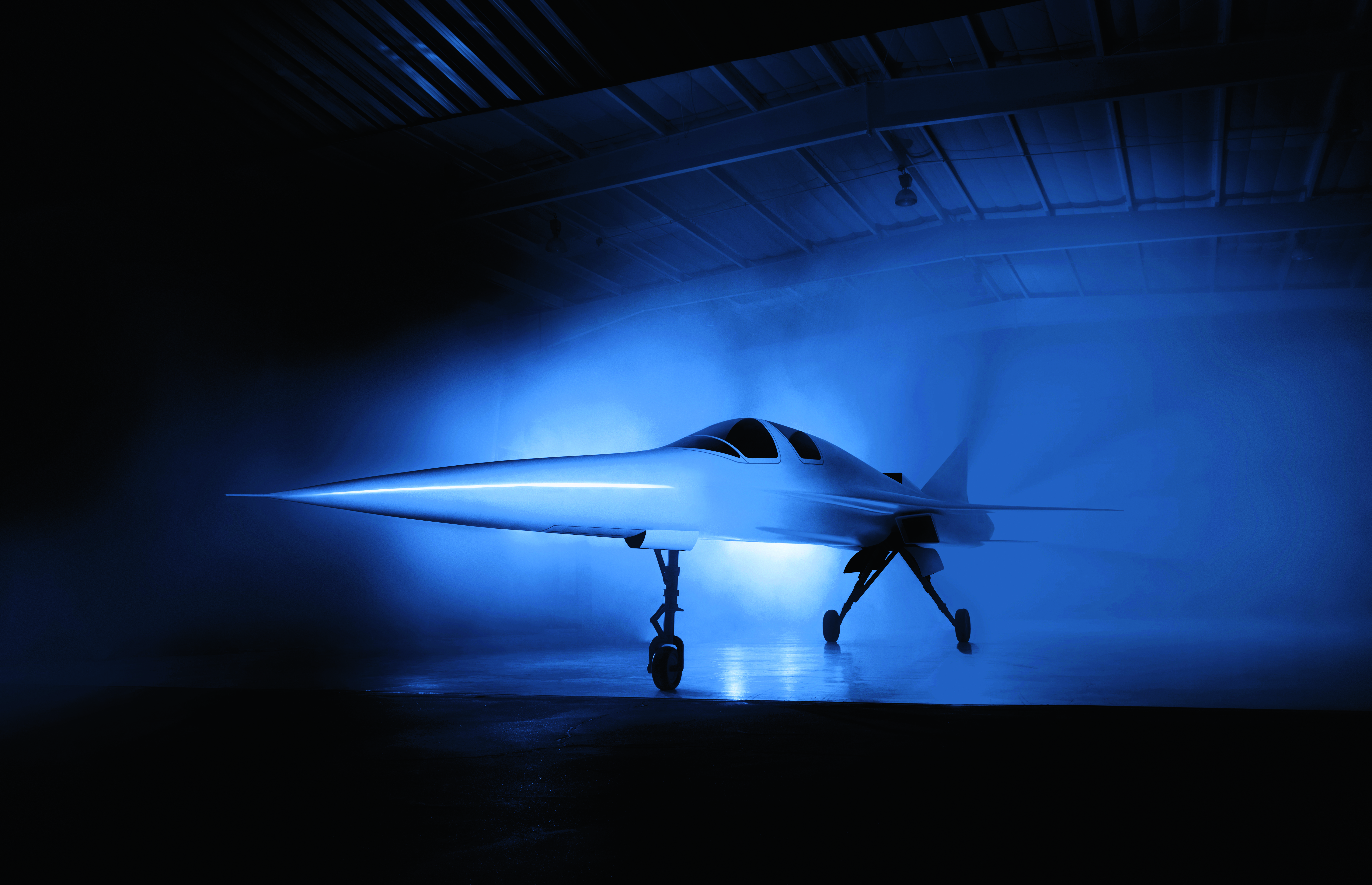 Since the retirement from service of Concorde in 2003, there has not been a supersonic commercial aircraft available to travellers. If an ambitious start-up aerospace company has its way, however, supersonic passenger travel will again become an option in about five years’ time.

Denver, Colorado-based Boom Technology is one of a handful of new companies currently developing supersonic civil aircraft. Most of them are business jets, but Boom’s project is an airliner that the company hopes will bring supersonic flight back to the airline industry – and with a much wider reach than Concorde was able to achieve.Boom Technologies was formed in 2014 by CEO Blake Scholl, a pilot and technology entrepreneur whose previous achievements include building marketing automation at Amazon. The rest of the team comprises people with considerable experience in the aerospace industry – designers, engineers and scientists covering all aspects of structure, propulsion, systems and manufacturing.Boom’s selling point is speed. Cruising at Mach 2.2 (2335km/h), it will more than halve point-to-point travel times. 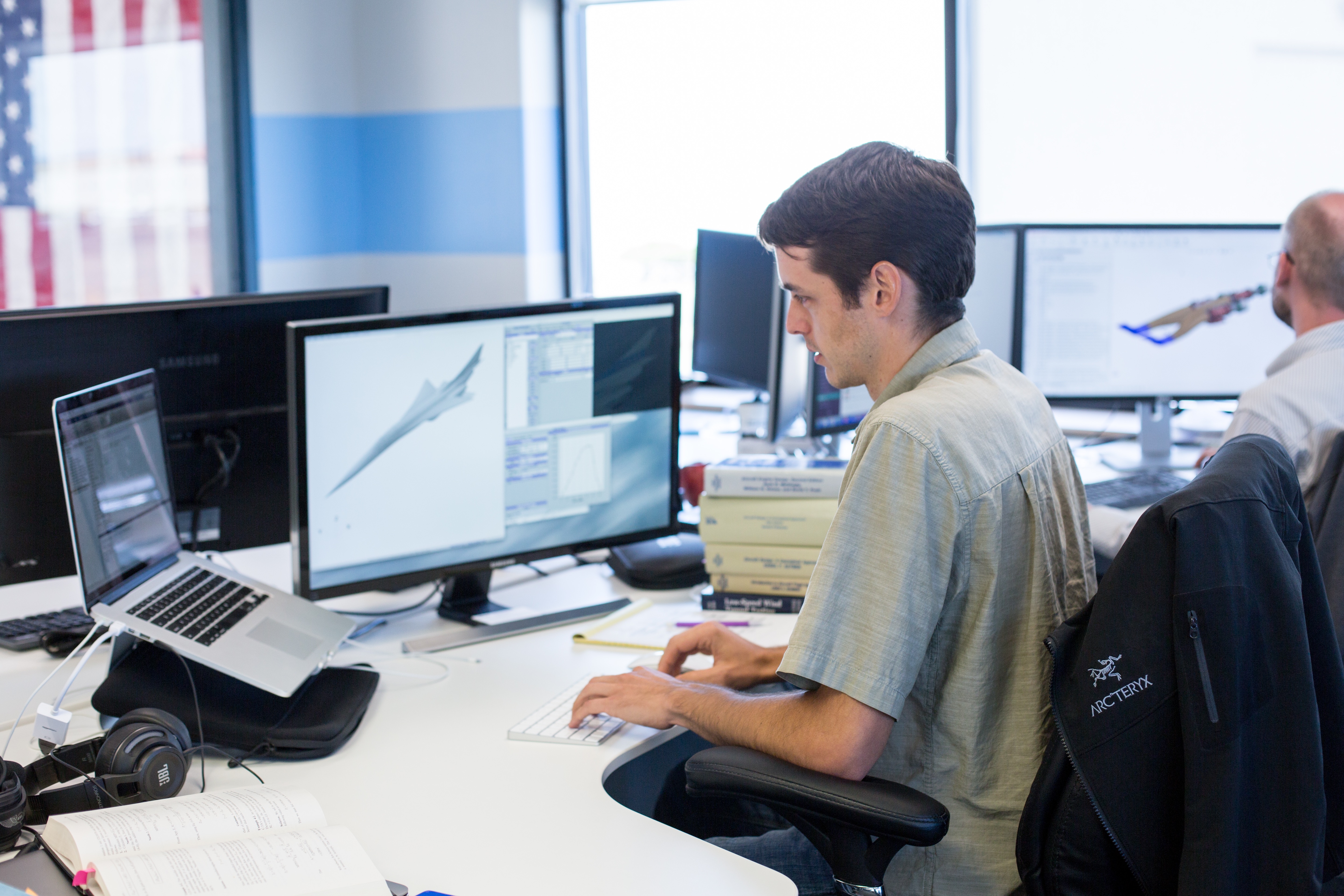 This was Concorde’s appeal, but it was only regularly used on transatlantic services. Boom expects its aircraft to have much more widespread applications.The company is highly optimistic, predicting a market for 1000-2000 of its aircraft and, when in full production, manufacturing up to 100 each year.Boom is claiming considerable early interest, with 76 options placed by five operators. The first 10 are earmarked for Sir Richard Branson’s Virgin Atlantic, while Japan Air Lines has gone further by investing $US10 million in the program and reserving 20 production slots.Most of the financial backing raised so far has come from Silicone Valley investors, people who also backed Dropbox, online accommodation broker Airbnb and online merchant payment processor Stripe, along with “many of the most successful internet companies,” according to Blake Scholl.

Boom is planning on flying the first aircraft in 2020 and after certification, delivering the first customer example in late 2023.TechnicalitiesThe Boom will be similar in size to the Airbus A320 and Boeing 737, made of carbon-fibre composites, feature a delta wing and be powered by three non-afterburning turbofan engines modified for the aircraft from an existing commercial powerplant.Why three engines? To achieve the necessary thrust, obviously, but also to sidestep the aerodynamic penalties that would result from having two larger diameter powerplants. Operationally, having three also helps bypass ETOPS (Extended Twin-engined Operations) regulations when flying over water.

ETOPS rules require that twin-engined airliners must always be a certain maximum flying time from an airport in case one engine fails. This often requires flying a longer, less efficient flight path, while Boom’s third engine will allow more direct routing. If one fails, there’s still two more.(A long-standing industry joke is that ETOPS actually stands for ‘Engines Turning Or Passengers Swimming’, but we won’t go there …)

The Boom will have a range of up to 8300 kilometres, sufficient for non-stop trans-Atlantic services, but requiring a technical stop for fuel over longer journeys. Blake Scholl says this is not a problem as the stops will be short, only about 45 minutes, and elapsed times will still be less than half that of a subsonic airliner going non-stop.Boom will carry up to 55 passengers in a standard equivalent to short-haul first class. Seating is just two abreast so everyone will have a window and aisle seat and the company is aiming for business class air fares to be the pricing standard.Operating economics are the key to Boom’s future. Even if all the technical issues are conquered, if it won’t make money for the airlines – assuming some of them want to go supersonic in the first place – it won’t sell, simple as that.

Before the full-size product takes to the air, the concept needs to be proven. To achieve this, Boom is building an approximately one-third scale proof-of-concept prototype. The XB-1 Baby Boom is scheduled to fly later this year, powered by three small General Electric turbojets. Designed to be achieve the same speed as the final product, it will conduct much of its testing from Edwards Air Force Base in California.Baby Boom will carry no passengers, just a flight crew of two. Windtunnel testing was performed at Wichita State University and once the airflow characteristics were confirmed as being in accordance with the various simulations, construction of the aircraft could begin. 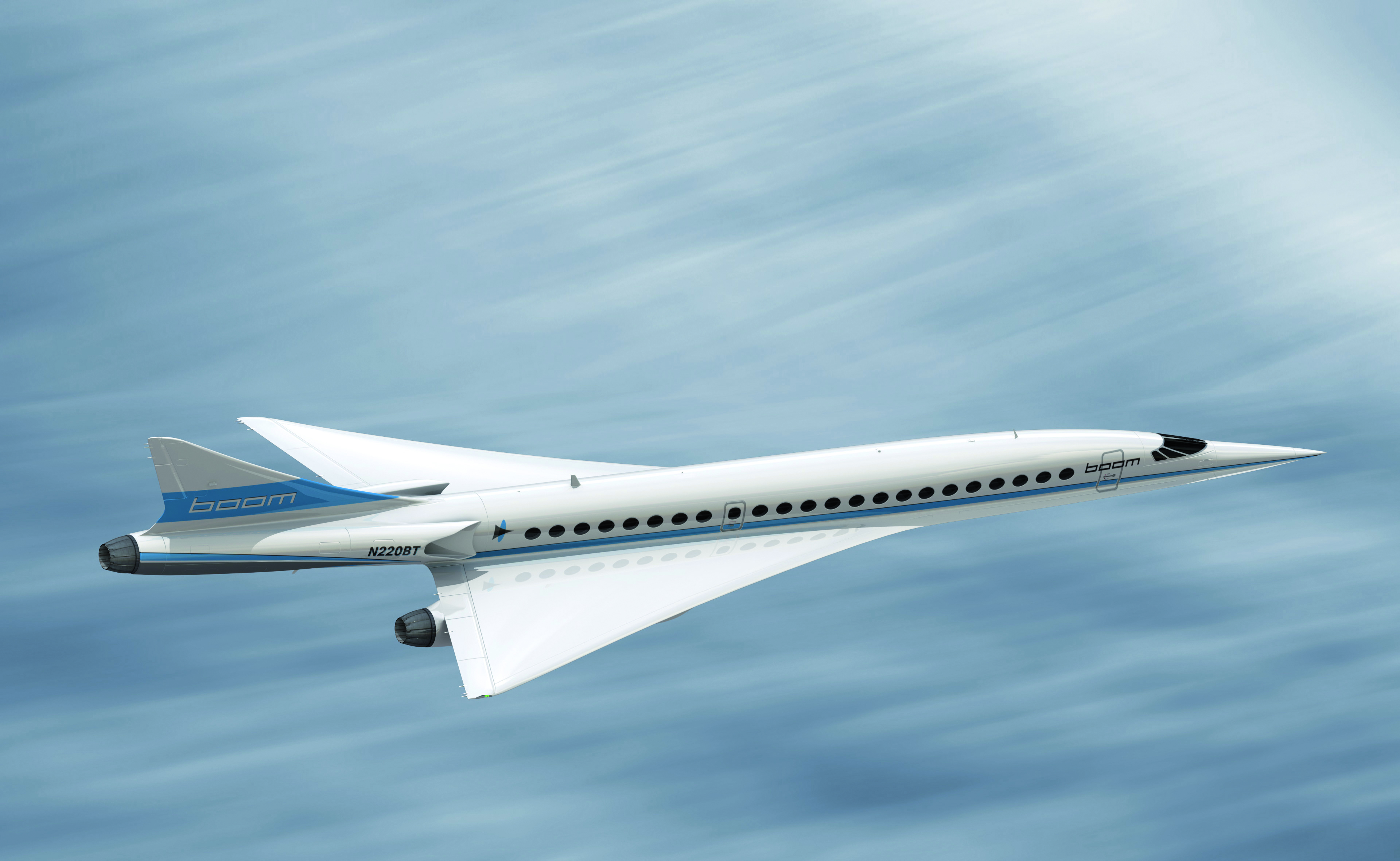 Boom times One major barrier to commercial supersonic flight is the sonic boom. Legislation introduced for Concorde still prohibits overland supersonic operations in many parts of the world. This is an obvious block to the Boom’s capabilities being fully exploited. It is also the reason why – initially, at least – its supersonic flights will be over water only.The sonic boom is as much an issue of perception as reality and usually misunderstood by the public and, of course, the mass media. Due largely to advances in aerodynamics design and other technology, Boom claims its airliner’s supersonic footprint will be “at least 30 times quieter than Concorde’s” and barely perceptible on the ground.The Boom’s relatively small size also helps minimise the supersonic footprint as simple physics dictate it will disturb the air less than would a larger aircraft.

The very high altitudes at which the aircraft will fly also helps minimise the effects of the sonic boom.The US banned overland supersonic flight by commercial aircraft in 1973. This was part of the anti-Concorde movement generally, politics and a prime example of the ‘not invented here’ syndrome at work. There is substantial lobbying to repeal or at least modify the relevant laws to allow supersonic flight over the US, promoted by Boom, the other new companies which are developing supersonic business jets and the industry generally. It’s an important issue for the industry. Established manufacturers of large-cabin, long-range corporate jets like Gulfstream and Dassault have shelved development of supersonic aircraft because the business case does not work for them so long as overland supersonic flights are banned.Everyone agrees that the technology now exists to overcome the perceived noise issues that led to the bans being imposed, so it’s up to the industry to convince the legislators that they should be lifted. In the meantime, Boom will focus on routes that are primarily over water, such as New York to London or San Francisco to Tokyo, flying subsonically when over land. It will, however, offer a business jet version of its aircraft for those prepared to spend the basic price of US$200 million plus interior and equipment fit-out to fly at twice the speed of sound.

Australian advantages Blake Scholl sees Australia as an ideal market for the Boom because of our remoteness, for both business and tourist passengers. “Does it make sense for a Chinese or US company to put a remote office in Sydney?” he asks. “It’s hard to get back and forth. While those flights are, for example, Tokyo to Sydney today is nearly 10 hours now, it can be less than five. Or Hong Kong shrinks to about four.” 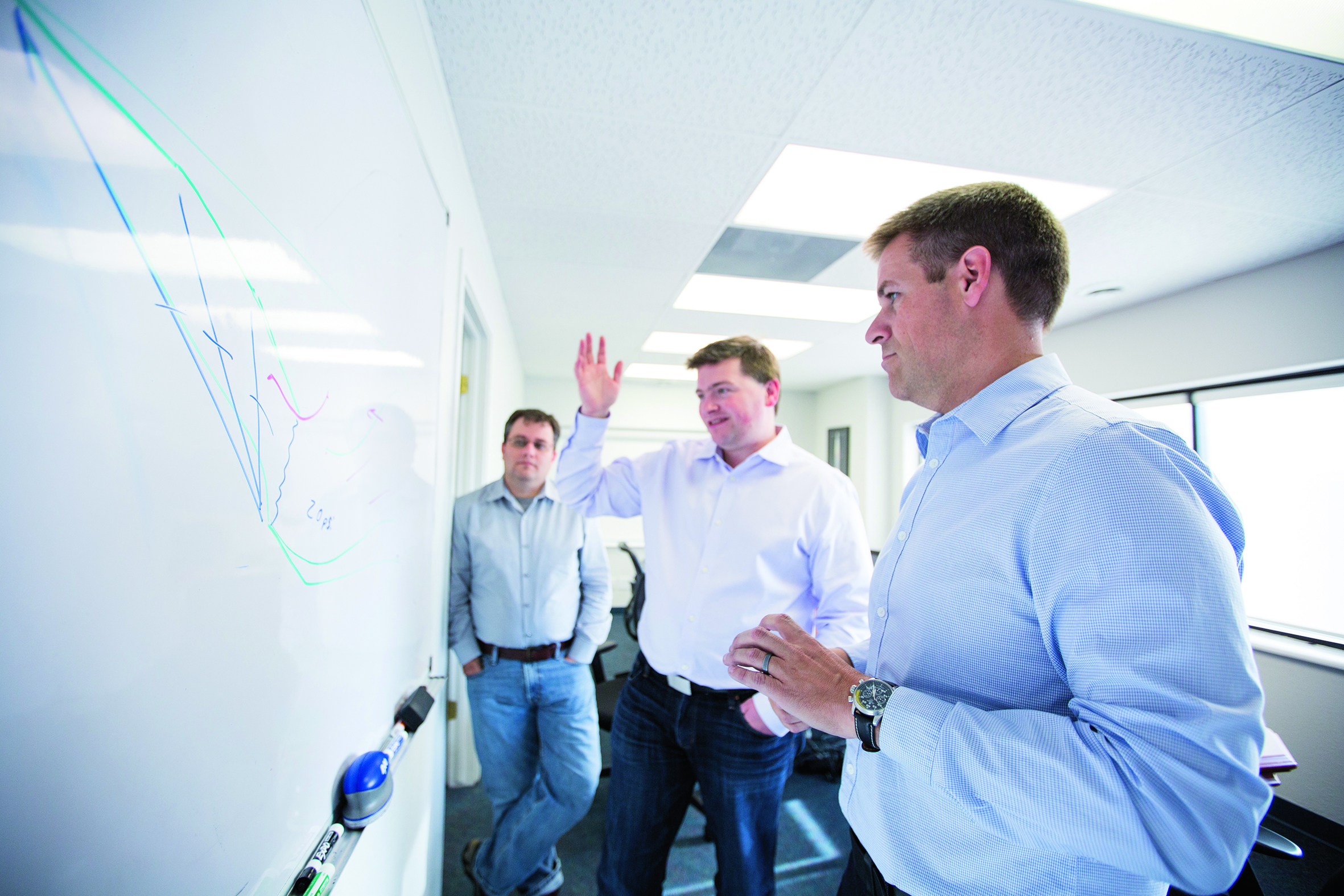 Sydney to London will take about 13 hours including two stops for fuel, while Sydney to Los Angeles can be done in seven hours including a fuel stop in Tahiti. The latter benefits from being entirely over water, while Scholl argues there is no reason why the first part of the journey to London over outback Australia can’t be supersonic.He says that going supersonic about 20 minutes or so after departing Sydney shouldn’t be an issue: “[The sonic boom] will blend in with the background, it’s not going to cause any damage, it’s not going to wake up sleeping children. On the other hand, the upside is tremendous.

Think of the improvement in connectivity.” Much to doBoom’s schedule for its new airliner is highly ambitious. Designing, building, testing, certifying and then getting series production of a new airliner underway is a complex and very expensive exercise for any manufacturer, even for established powerhouses like Airbus and Boeing.For a start-up like Boom, it’s even more difficult and the fact that its aircraft is supersonic adds several layers of complexity and cost to the process. Boom still has much to do with even with the basics.

At the time of writing, its engines still had to be selected (and developed) and the location of the factory in which it will be built decided. On the other hand, Scholl says that there is no single material or component on his airliner that is not already in common use in the aviation industry. Can it succeed? Can it even get into production? Some are doubtful, but others are convinced it will. As they say, “the bottom line is the bottom line,” and if Boom can prove to airlines that its aircraft can generate healthy profits for them, there’s every chance that the order book will start filling up.