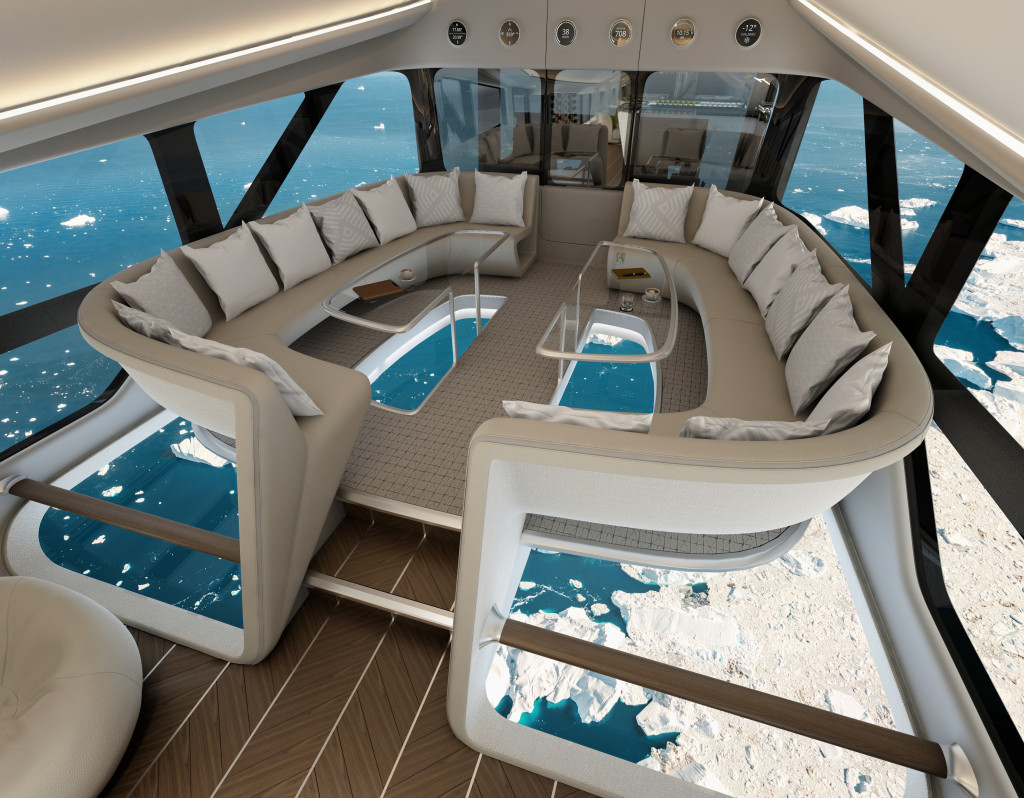 Design Q specialise in making the private jet more personal and intimate with its fastidious fit-outs.

Much of the company’s work, meanwhile, involves fit-outs for private jet customers: and Design Q’s is an approach which brings that much beleaguered word “bespoke” to genuine fruition. “Where we really pride ourselves on being different is, we physically build the actual things, often complicated and tricky things, that will go into the aircraft: a specially designed sculpture in the case of one client. It’s the stuff that most suppliers will not get involved with because they’ll only be making ten or even 50 of them.”

The company’s raison d’être, Guy says, is to create trends rather than respond to them. “The thing is, clients don’t always know what they want until they see it. They want to see some visual proposals. So we gather a whole load of information from them – what’s their favourite car, place, food, colour, crazy things – then we try and find components and a design that pushes all of his or her buttons. We have to invent things that surprise, delight and excite: these are people who are stepping out of a pristine, beautifully executed £300,000 Rolls-Royce or Aston Martin into a $70-million jet – so their expectations of it are high.”

Two projects with which Design Q is now involved neatly embody how the design of private aircraft may be shaped in the future. One of them is a modern reiteration of a plane that was grounded in 2003. “Concorde was a really sad demise – it was a mind-blowing technology, and now we’ve lost it nothing has come close to it. It’s the only instance I can think of where something in a museum is better than what’s come after it. It’s like looking at a Model T Ford in a museum having all gone back to horses.” 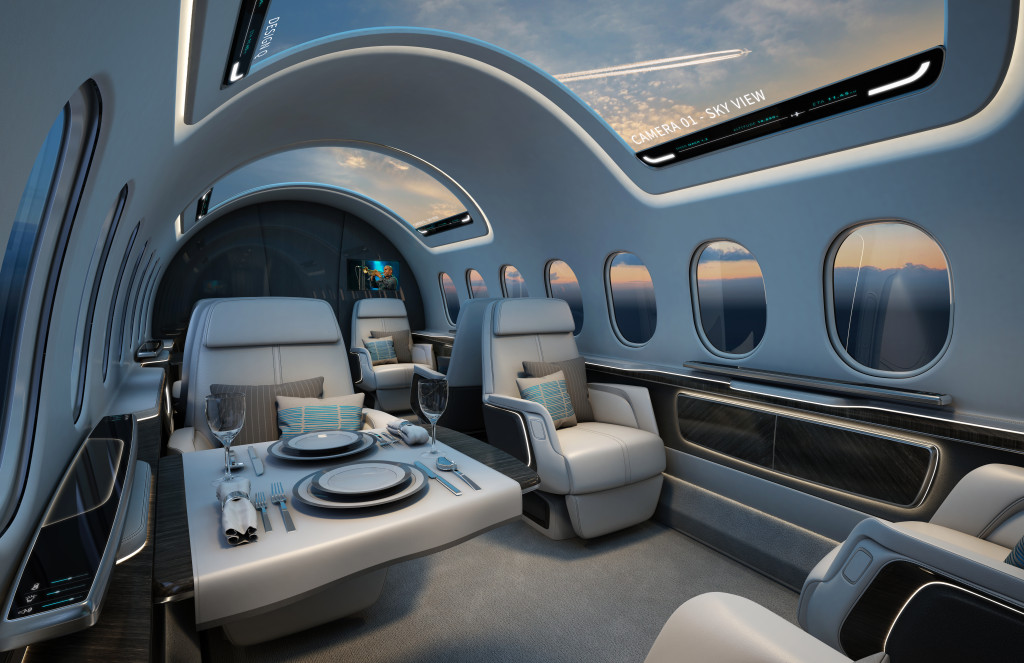 Now, though, supersonic travel – or something close to it – looks set to make a return. “There are one or two companies who have been promising it for seven or eight years now,” says Guy. “The latest Rolls-Royce engines for the Bombadier Global 7500 are so efficient, they take the aircraft almost 1500 kilometres further with the same fuel – and if something’s that efficient, it’s easier to make it go a lot quicker.” Supersonic private jets would, Guy points out, inevitably look far different geometrically. “The Aerion has got sort of a Concorde shape – long, sharp, dart-like with the wings proportionally much smaller because, like a fighter jet, it doesn’t rely on its wings as much as its engines. There’s less drag.”

The other game-changing project – and another one which resuscitates a form of air travel rendered obsolete in the wake of disaster – is Airlander: a collaboration with Hybrid Air Vehicles Limited which will see passenger vehicles of a type last seen before World War II take to the air. “It’s a revolutionary concept, even though people have seen zeppelins and airships, but to do it commercially and do it properly – that’s a really exciting area to get into,” says Guy.

While range, speed and luxury are the current triumvirate when it comes to priorities in private aviation, Airlander packs an entirely different appeal. “It’s nothing to do with getting from A to B as quickly as possible – it’s about flying as slow as possible, or even staying stationary for a day if you want to. It only goes about 140km/h, so in a 140km/h head-wind it stays still. Being 10,000 feet up in the air is cool – but it’s even cooler to be 50 feet over the waves watching whales mating, or going over a precipice of Victoria Falls, motionless, as long as you want to sit there. It can stay still for up to three months – which is what the technology has been doing for the American reconnaissance military for 10 years.”

How this could revolutionise a company like Design Q’s approach to interiors comes down to regulations which impose huge ergonomic constraints on plane interiors. “Seats in a plane are required to withstand a 16g dynamic force – and making seats pass all the tests is really not easy. Because Airlander is an airship we’re only dealing with 3g, and that allows us to look at the furniture in a very different way. Airlander is for 18 passengers maximum, yet the whole cabin space is the same size as that in an Airbus 330.” The result is a layout – bedrooms, lounge areas, bars, dining rooms – that resembles that of a superyacht, and with not just 360-degree views but clear vision downwards too.

Guy also cites another trend which is having an impact on aviation design. “More owners are starting to get pilots’ licenses and fly their planes themselves now. So one of first ever instructions we got from Bombardier was to turn the flight decks from something that looked like a military, 1950s aircraft – cold, grey, tank-like – into something more like that of a top-end Bentley or Aston Martin. We had to up the game and make flight decks luxurious and comfortable.” 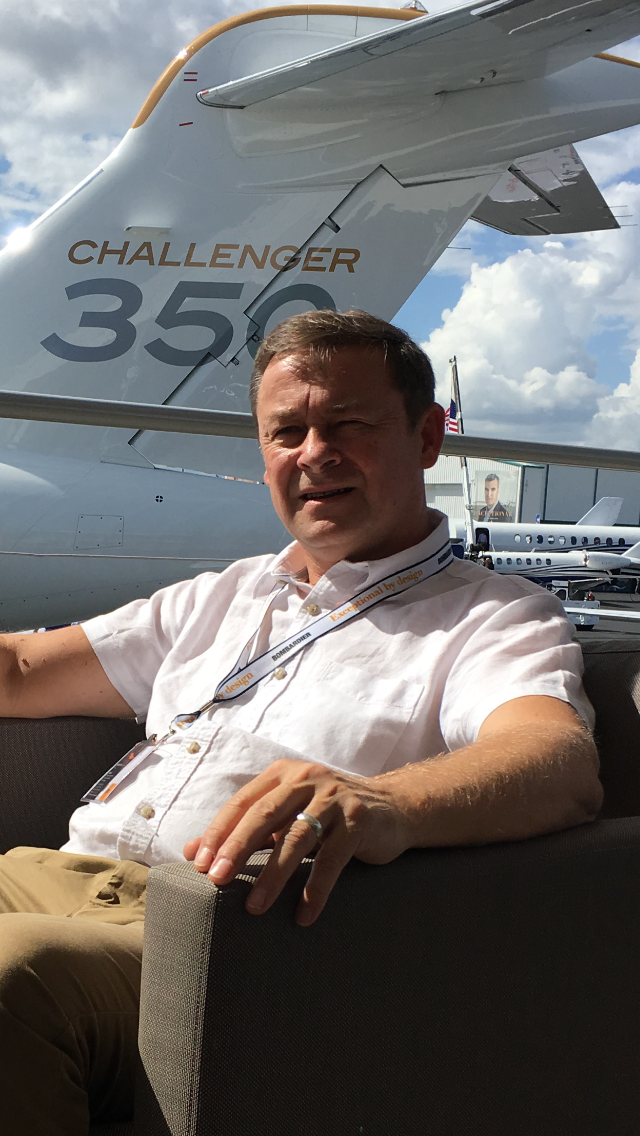