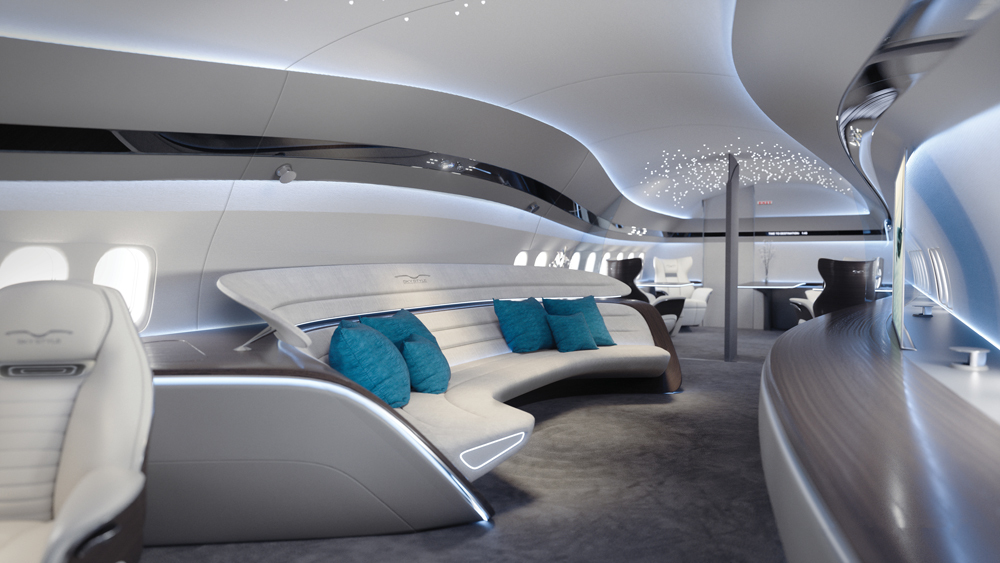 Boeing takes its bizliners to the Max

At NBAA, the Boeing Business Jets announced the first BBJ Max delivery and a wildly innovative cabin concept to go with it.

The venerable Boeing 737 airliner traces its lineage back to the 1960s and has been available in VIP configurations for private and corporate owners as Boeing Business Jets (BBJs) since the late ’90s. But make no mistake—the BBJs of today are thoroughly modern aircraft. The most recent generation is dubbed Max and was launched in 2014 with the first order of a BBJ Max 8. (The Max 7, 8, and 9 are all based on the same bizliner platform but have different cabin lengths and ranges, among other distinctions.) 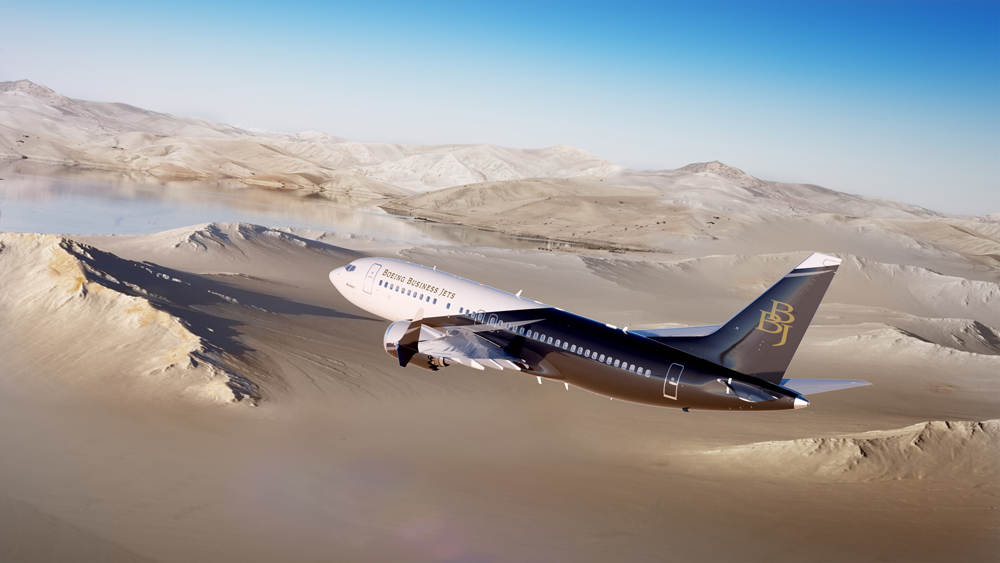 At the National Business Aircraft Association (NBAA) show in Orlando, Fla., earlier this month, Greg Laxton, head of Boeing Business Jets, shared details of the progress of the Max family program, noting that the company has orders for 20 Maxs in the works and will deliver the first Max 9 in 2019 and the first Max 7 in 2021. However, there was more immediate news of note, with Laxton announcing that the program’s first green jet (a Max 8) was delivered to its owner earlier this year; it’s now at a completion center having its interior installed.

And while we’re sure its cabin will be impressive, it would be damn-near impossible to beat the new interior concept the company revealed at the show (though Albert Pinto’s comes pretty close). The concept was designed by Argentinian firm Sky Style and marks the first time BBJ has collaborated with the design company. “We met them at a design awards that took place in Venice this year, and Sky Style was a fellow award winner,” says Laxton. “We took the opportunity to look at each other’s work and decided that Sky Style would be a great partner for their first business jetliner design.” 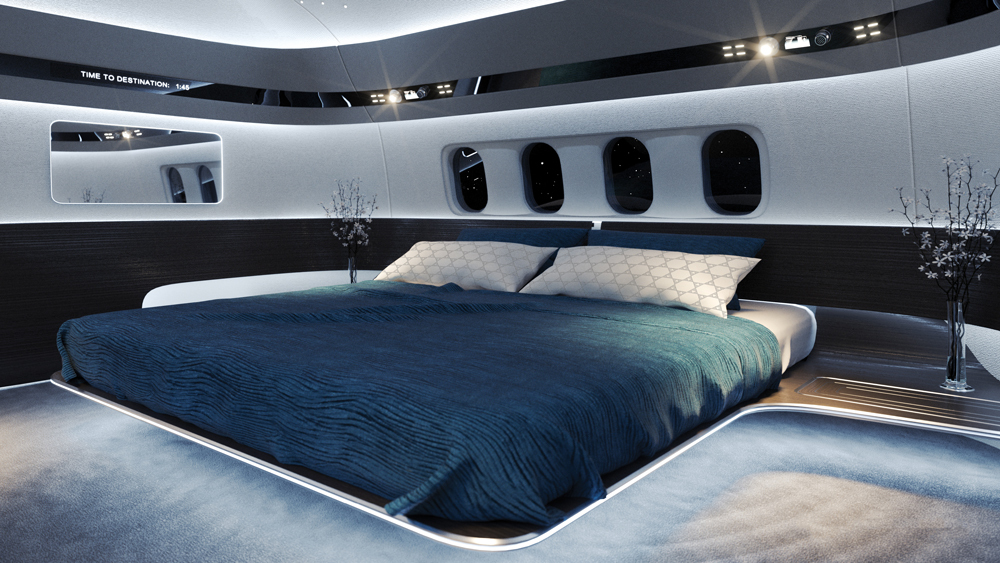 The Max concept is called Genesis and is said to draw inspiration from elements of nature. For instance, the color palette is evocative of a cloudy white-sand beach, its ceiling is decorated with LEDs that evoke stars in the night sky, and it is full of sweeping lines and curves that recall rolling hills. That said, the interior reminds me more of Star Trek than Starry Night, with LED strips illuminating the edges of tables and bulkheads as well as executive seats that look like the commander’s chair in a spaceship. 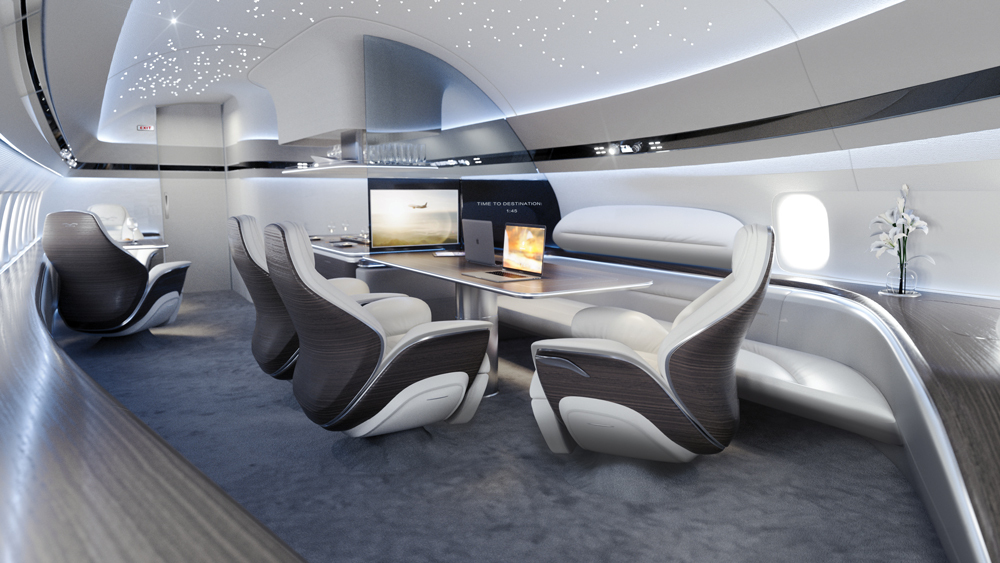 Throughout the plane, spaces transform at the touch of a button, including a wine-glass rack that lowers from the ceiling and a partition that unfolds itself to separate the office and owner’s cabin from the rest of the plane. There’s also an imaginative twin dining table concept: While one lowers, a divider between the galley and the dining area slides open; the other half of the table then automatically shifts over from the galley, allowing you to transition from working to enjoying a fully served meal in seconds. There’s even enough clearance between the two surfaces for you to leave your closed laptop on the table while the transition happens. “We worked with the designers to make sure that what was presented in the CGI rendering wasn’t just made up—that it’s actually practical and doable,” says Laxton. 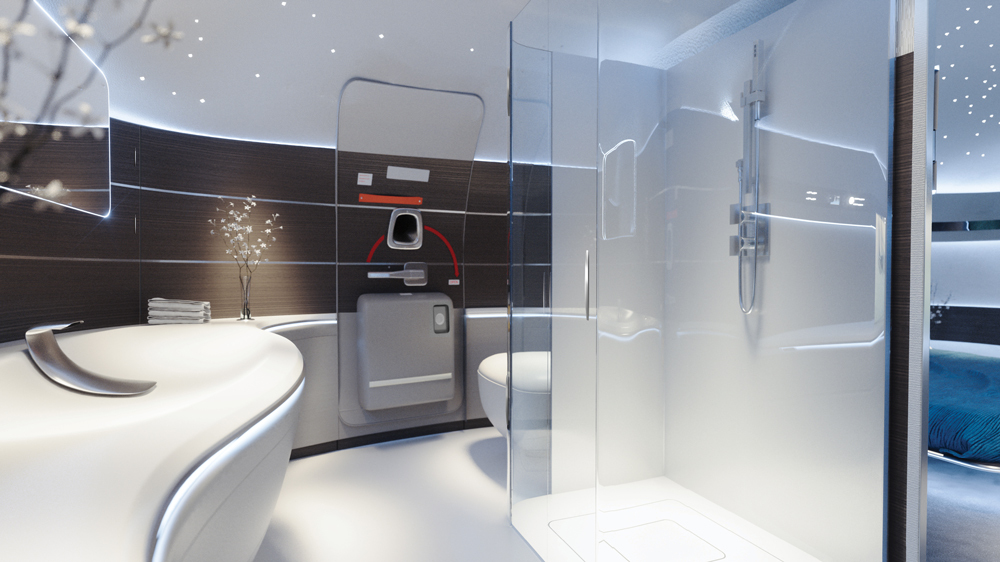 While all of this seems extravagant (because, of course, it is), Laxton is quick to point out that even though BBJs are large, they are remarkably efficient. “With the new efficiencies of the engine, this airplane is a lot more accessible than previously thought,” says Laxton. “It costs about the same to operate as a much smaller cabin jet—say G650s or Global 7500s or so forth—and it takes up the same ramp space.” Just thought I’d leave you with a little ammo to win over the spouse.