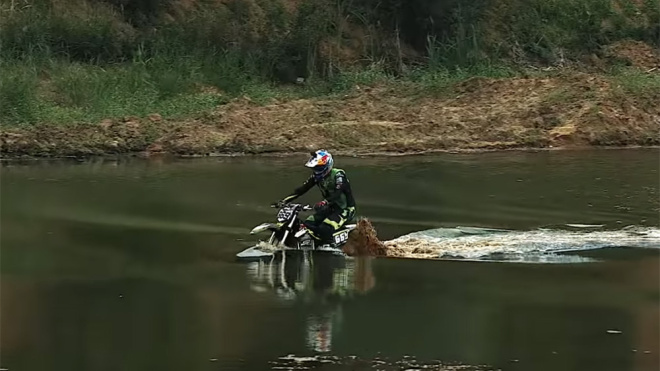 A Russian electric dirt bike does what a gas-powered dirt bike never could.

It’s something you learn at a very young age: electricity and water don’t mix. Just don’t tell that to EV company Milandr; its SM-250 electric dirt bike appears to have no problem running underwater.

The Moscow-based company shows off the amazing off-road capabilities of its electric motorcycle in a new video posted to YouTube earlier this fall (via New Atlas). In the clip, bizarrely set to a piece from Tchaikovsky’s Sleeping Beauty ballet, the small bike can be seen tackling all manner of terrain from dirt tracks to hilly forest paths to boulders to…a giant pool of water.

While you wouldn’t call the demonstration a smooth ride, exactly, it’s impressive nonetheless. After a couple attempts, Milandr’s rider is able to take the SM-250 from one end of a lake to the other without stopping. And while the bike’s got some power—it gets its juice from a 6.6 kWh battery and motor set-up that’s capable of producing 41kW and hitting a top speed 120km/h on dry land—it’s hard to imagine any other bike accomplishing the task.

Indeed, the bike’s ability to cut through a pond is due entirely to its electric drivetrain. Like most EV bikes, the SM-250 is powered by an enclosed system that is sealed against water and requires no air intake. That allows the bike to function even when fully submerged. It would be impossible for a traditional dirt bike, no matter how hardy, to do the same once its carburettors got clogged with water and mud. Chalk one up for the EV.