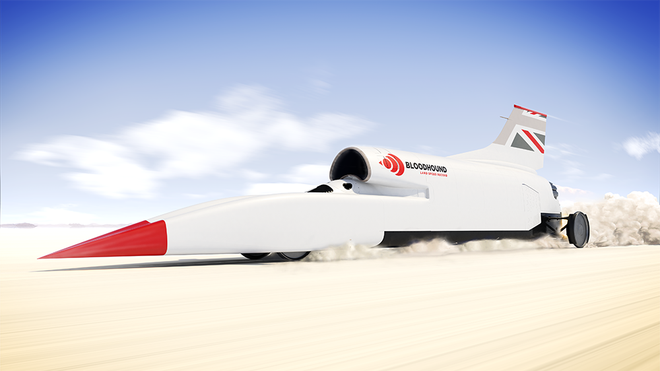 The jet engine-powered Bloodhound LSR rocket car isn’t ready to break the 1000mph (1609km/h) barrier just yet, but it’s not far off. In its latest round of testing, the jet-powered vehicle actually went so fast that its paint started peeling.

As part of high-speed testing in South Africa’s Kalahari Desert, the car managed to easily surpass its most recent target of 965km/h (600mph) when it actually reached a top speed of  1010km/h (628mph) earlier this month. This comes less than two weeks after the car topped 800km/h (500mph), making it one of the world’s 10 fastest vehicles.

Earlier this week, the group behind Bloodhound LSR posted video of the run to YouTube. In the footage, you can see the car, which is driven by Royal Air Force pilot Andy Green steadily building up speed and kicking up dust as it streaks through the dry Hakskeen Pan riverbed. The car lets off a deafening roar as it surpasses 600 mph and Green actually lets off the gas shortly before the car reaches its peak speed some 50 seconds and five miles into its run. After releasing the car’s twin parachutes, it takes another about another minute and two miles for the vehicle to finally come to a stop.

The jaw-dropping run marks an end to this round of three weeks of high-speed testing for the Bloodhound LSR. The group behind the car will now take the data gathered from 13 runs and use it to attempt to break the current land-speed record of  1223.9km/h (763 mph) within the next 12 to 18 months. That record was set by the Green-driven Thrust SSC back in 1997 on the same course in South Africa.

Based out of England, the Bloodhound LSR team believe the car, which is powered by an ultra-powerful Rolls-Royce EJ200 jet engine, can eventually reach a top speed of  (1609km/h) 1000mph. At that speed, the vehicle will be able to cover a mile in just 3.6 seconds and its solid aluminium wheels will complete 10,200 revolutions per minute.

Watch the clip below.