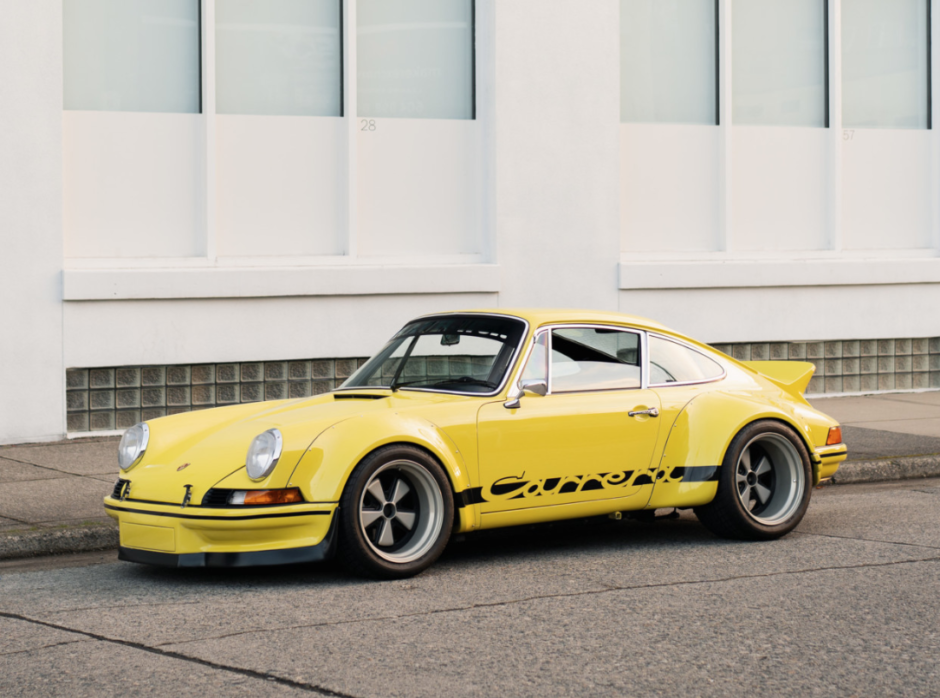 This Restored Yellow Porsche 911 Has A Punk Tartan Interior

The RWB-Backdated 1987 Porsche 911 Carrera Coupe is up for auction.

Few vehicles call to mind the 1980s quite like a Porsche 911. And now, one of the slickest examples of the classic sports car we’ve seen of late—a RWB-backdated 911 Carrera coupé—is crossing the auction block.

The gorgeous sports car is currently up for grabs on Bring a Trailer, the hipster collector’s current online car marketplace of choice. With a bold yellow-and-black paint scheme and subtly modified body, this particular Carrera is ideally suited to someone with a soft spot for the style of the original Me Decade.

The Carrera in question was restored by Los Angeles-based Porsche tuners Rauh-Welt Begriff in 2015. While working on the car, the shop’s founder Akira Nakai installed a backdate kit, including widebody fenders, an extended hood and a ducktail spoiler, along with ridding it of extraneous details like its sunroof. Other additions include H4 headlights, a pop-out vent and Fikse 17-inch Fuchs-style wheels wrapped in Sumitomo HTR tires. From there, he repainted the car in Porsche Light Yellow and added Carrera script to the side, along with black RWB decals on the spoiler and upper windshield.

Nakai paid just as much attention to the interior. In fact, it might be even more striking with its black vinyl and yellow tartan colour scheme. In addition to covering its fixed-back sport seats, the plaid pattern can also be seen on its RS-style door panels, rear side panels and dash fascia. Other new touches include a MOMO Prototipo steering wheel, 917-style wood shift knob and Rennline pedals, while the rear seats have been replaced with additional storage.

The modified Carrera’s innards are no slouch, either. This particular Porsche is powered by a resealed 3.2-litre flat-six engine equipped with Jenvey Dynamics individual throttle bodies and a yellow 11-blade fan. The engine sends power to the vehicle’s rear wheels thanks to a G50 five-speed manual transaxle transmission. Strangely, its unclear how much mileage the car’s seen. The odometer reads 7000 kilometres, but that only represents the mileage that’s been put on it since it was converted to the metric system.

If you want the RWB-backdated 911 Carrera coupé for yourself, you’ll have to move by Wednesday, March 4. With just under a week to go, expect bidding to easily eclipse $90,000.